“I’ve been doing this 30 years and I’ve never seen markets like this,” Currie said in a Bloomberg TV interview. “This is a molecule crisis. We’re out of everything, I don’t care if it’s oil, gas, coal, copper, aluminum, you name it we’re out of it.”

Futures curves in several markets are trading in super-backwardation -- a structure that indicates traders are paying bumper premiums for immediate supply. The downward sloping shape in prices is generally taken to mean commodities are severely undersupplied.

This is the time in the cycle where there is a vociferous argument between whether the strength in commodity prices is cyclical or secular in nature. If it is cyclical then we are in a repeat of the post global financial crisis episode where commodity prices surged to new highs and subsequently gave up most of the advance. On the hand, if this is the beginning of a new secular theme, we can expect the breakouts to hold and prices to multiply several times over the next decade.

The cyclical argument is implicitly tied to the transitory inflation model. Once the supply bottlenecks ease and workers are free to move about, unencumbered by restrictions, supply will increase, demand will moderate and prices will retreat.

The secular argument rests on two potential outcomes. The first is countries are serious about an energy transition. At its root that implies substituting industrial metals for some of oil’s dominance of the global energy sector.

The EU’s enthusiasm for carbon emissions trading and growing protectionism suggests there is a growing commitment towards substitution and energy independence which supports the long-term energy transition argument.

The challenges to this course of action from intermittency, distributed sources of supply and the durability of current solutions are well understood. Technological promise and availability of credit are the potential solutions.

The second relates to the potential for significant future climate volatility. The last 18 months has seen abnormal droughts, floods, heat and freezes in many major commodity production regions. If this is a short-lived aberration from the norm that would support the cyclical argument but if this is a trend of greater variability it represents a causal factor in the rising cost of production.

From a bird’s eye perspective, the cyclical factors could cause volatility and a growth scare in the short term but the secular factors are likely to ensure the breakouts are sustained. That suggest we are potentially closer to another risk-off period for risk assets. 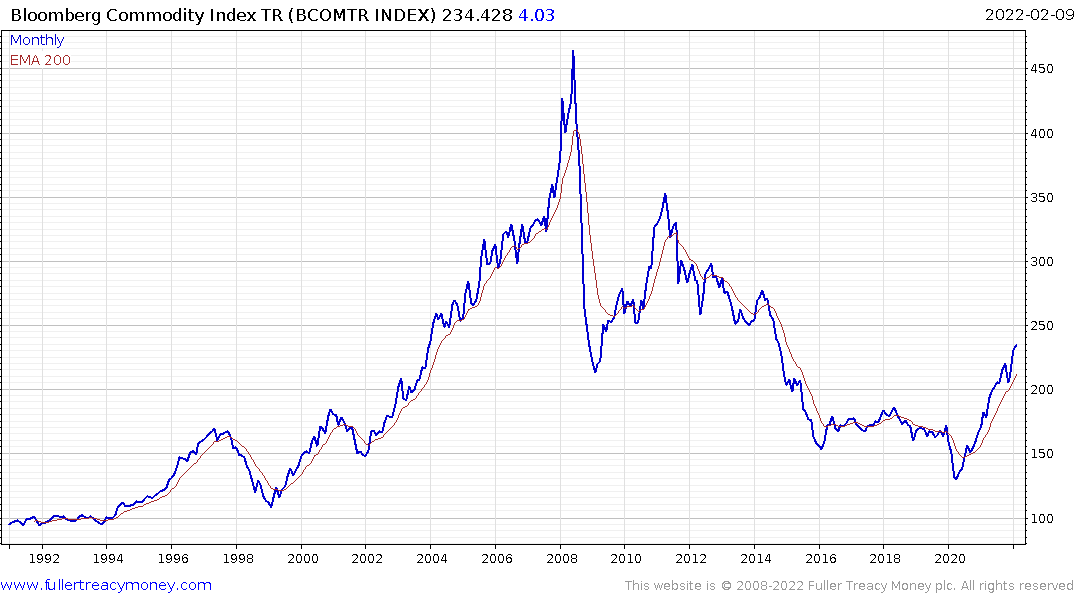 The Bloomberg Commodity Spot Index bounced from the region of the all-time peaks in early January. A sustained move below 475 would be required begin to question medium-term scope for continued upside. The LME Metals Index has a lot of commonality with this index but some consolidation is likely in the short term. 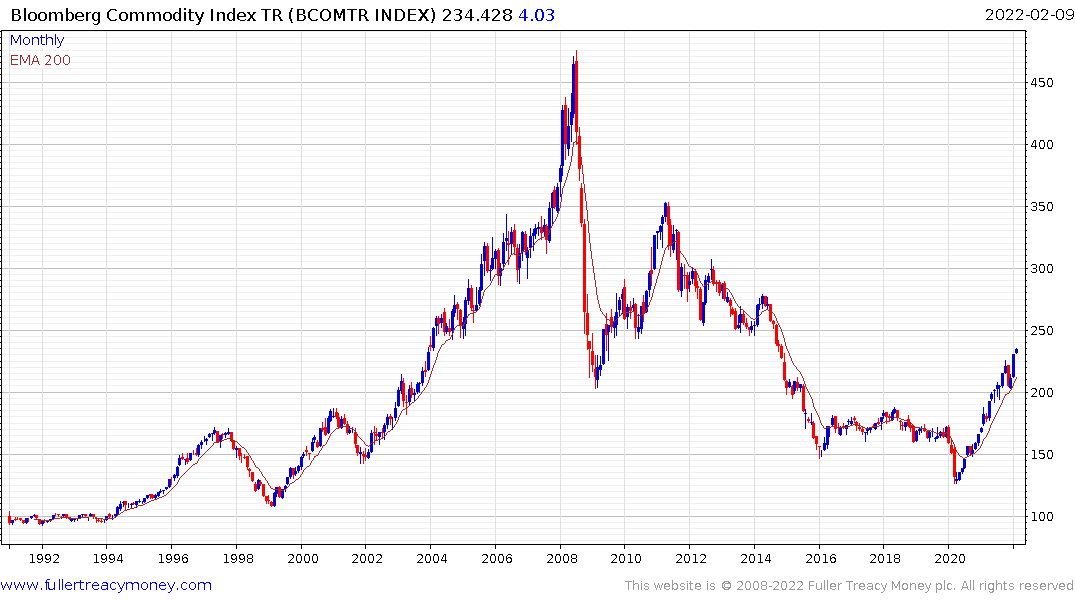 That trend is likely to benefit anything that helps improve the efficiency of producing commodities from fertilisers to heavy machinery. It also supports labour saving device plays like robotics that reduce the need for more workers. 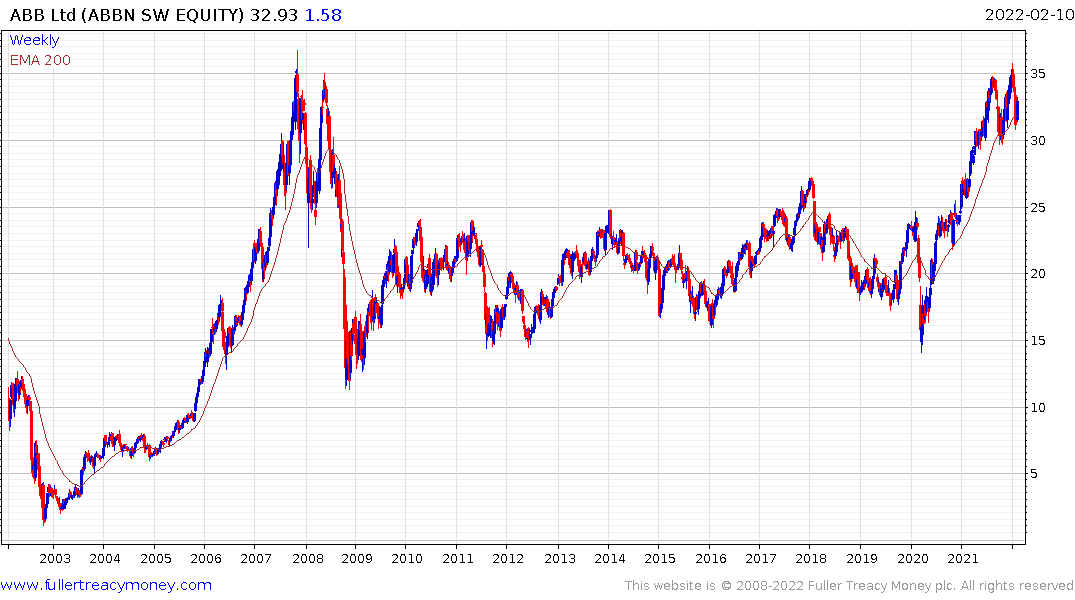 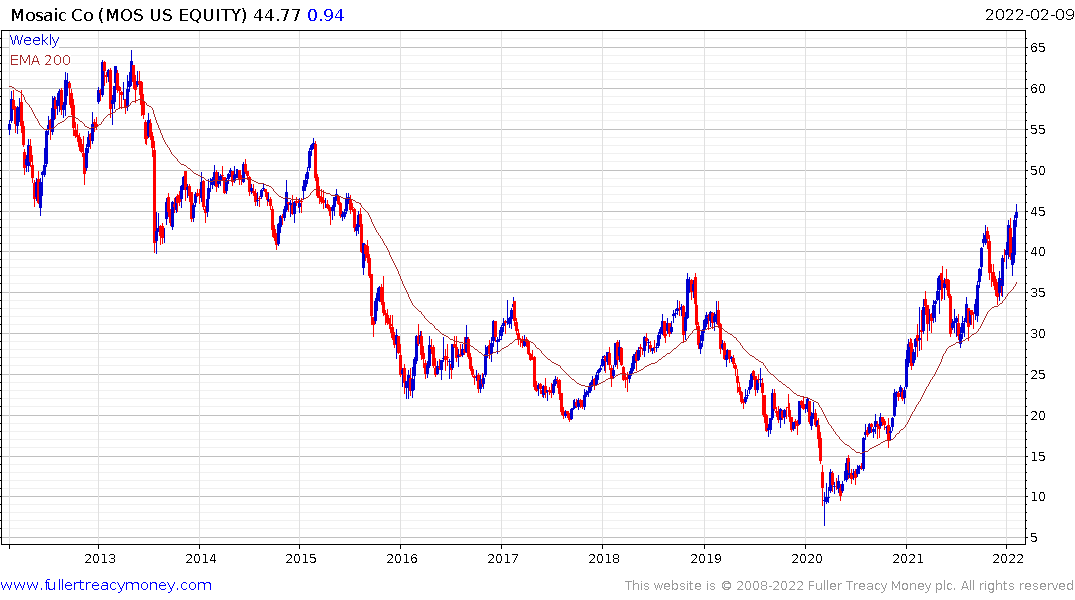 Mosaic continues to extend it breakout from a well-defined base formation but is susceptible to some consolidation. . 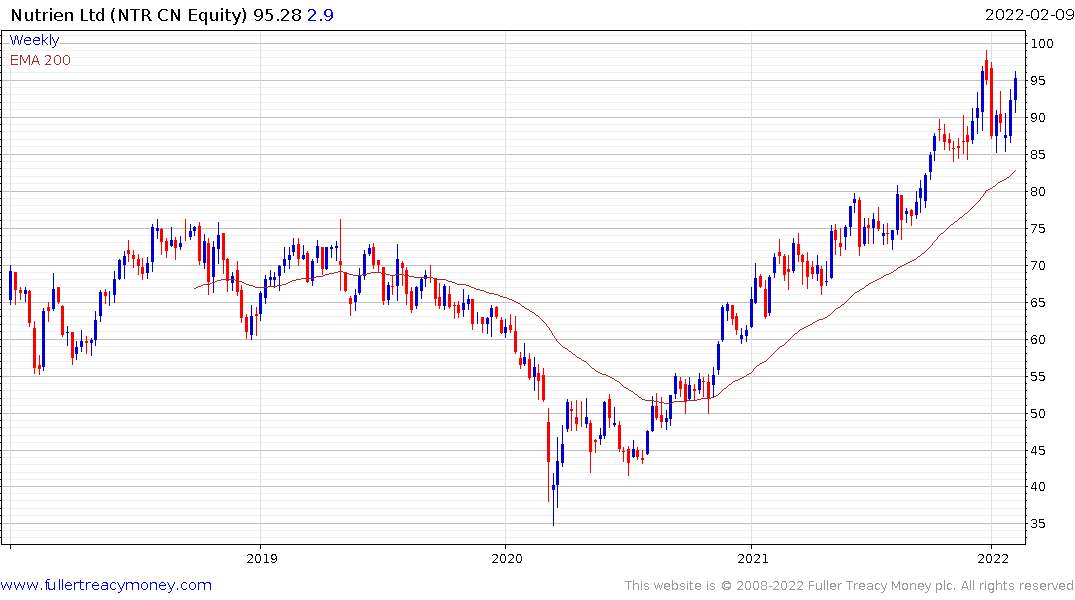 Nutrien is trending higher in a consistent manner. 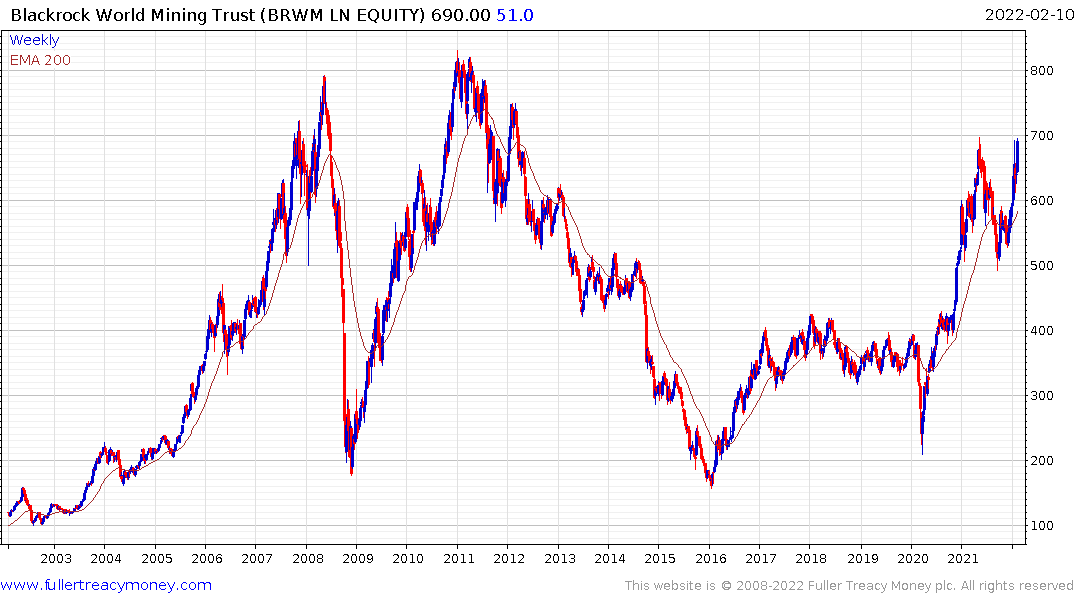 The Blackrock World Mining Trust is currently testing the 2021 peaks and remains in a medium-term uptrend.