Gold Slumps to an Eight-Week Low as Dollar, U.S. Stocks Rall
Comment of the Day

A strengthening dollar and the rally in equities is spoiling the party for gold bulls. Gold futures tumbled to the lowest in almost eight weeks after the Trump administration partially refuted a report that it would target Chinese capital market. Speculation is mounting that Washington issued the statement to encourage Beijing to move closer to signing a deal with Washington, a strategist at R.J. O’Brien & Associates said.

Monday’s slump trimmed the precious metal’s fourth straight quarterly gain, the longest winning streak in eight years. Bulls are retreating after taking their net-long position in gold to the highest in government data going back to 2006.

The strength in the greenback “is the biggest headwind for gold right now,” Phil Streible of RJO said by phone from Chicago.

The point I find most interesting about the move we are seeing in gold is how similar it is in magnitude to what occurred in the early 2000s. The initial spike occurred in 1999 but it took about two and half years for the price to breakout to new highs. It subsequently rallied 18% from the breakout point and retraced the whole move, to test the upper side of the base, before trending higher in an impressive manner for the next nine years. 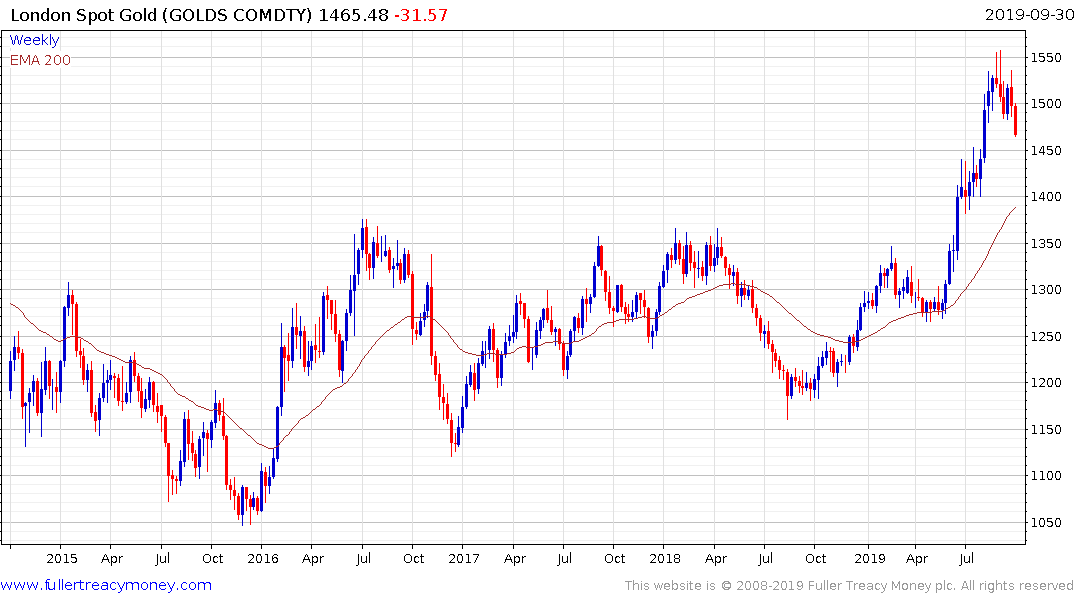 On this occasion the price surged in 2016, ranged for about two and a half years, rallied 15% from the breakout and is now pulling back. The price broke downwards from the short-term range today and that increases the likelihood of a reversion to the mean.

The big conclusion for gold bulls is if the measured move way of assessing this bull market persists, or even rhymes, there is clear upside potential for significant upside for gold over the next decade.