If gold’s implicit prediction is right, it has two implications. The first and most important one is a belief that inflation is at last due to return, after many false alarms. The second is that gold is now settled in a bull market.

So, is gold good value? The metal doesn’t throw off any income streams, and has very few industrial uses, so it is very hard to come up with a measure of fair value. But the following chart, using data drawn up by Charlie Morris of Catley, Lakewood and May in London, is a heroic attempt to arrive at one. Morris devised a formula for fair value using the consumer price index and the average of 10- and 30-year inflation expectations. This indicator briefly showed that gold was wildly overpriced during the worst of the 2008 crisis, a phenomenon that may have been driven by the illiquid markets of the time, that created an unrealistic inflation forecast. Exclude this incident, and we see a steady bull market for gold from 2005 to 2011, followed by a steady bear market, where it moved to a discount. In the last two years, it looks as though it may have started another bull market. By Morris’ calculations, gold is now about 11% over fair value.

Gold is still far from the confident prediction of runaway inflation that it briefly produced for a few years after the crisis, even though it is buoyed by safe haven demand at present, along with seasonal interest in gold jewelry, notably from China where the lunar new year is almost here, and by resumed interest from central banks.

On the supply side, gold-mining groups are merging, creating a reasonable hope of avoiding over-supply in the near future. So, if this move in gold prices is confirmed by a move down in real yields, followed even by an increase in inflation, then this could be part of a bull market to match the one from 2005 to 2011. The critical question is whether the gold market proves to be right this time in its forecast of inflation.

Gold is often viewed as a hedge against inflation but that is a largely a corollary to its prime position as a monetary barometer. The foreign markets are relative value oriented. One can’t really say a currency is strong or weak unless it is compared to whatever it can be converted into. All fiat currencies are subject to the tendency of governments to print with abandon at the first sign of trouble. Gold does best in periods when competitive devaluation becomes a factor, which is exactly what we have today; with a growing trend of synchronised monetary and fiscal stimulus. Inflation is a side effect of that profligacy.

This is the point in the economic cycle when inflation can be expected to become a factor. The mature part of the cycle generally sees capacity constraints, wage demand growth, higher valuations, a return of global growth and that generally contributes to higher commodity prices and inflation.

The de facto adoption of Modern Monetary Theory by the USA, continued QE in Europe and Japan, fiscal stimulus in the UK, Australia and other countries and China’s targeted easing all suggest we remain in a liquidity fuelled environment, not least because central banks and governments are more afraid of deflation than inflation. In fact, the most recent sounding from the Fed and Bank of England are skewed towards allowing inflation to run hot. 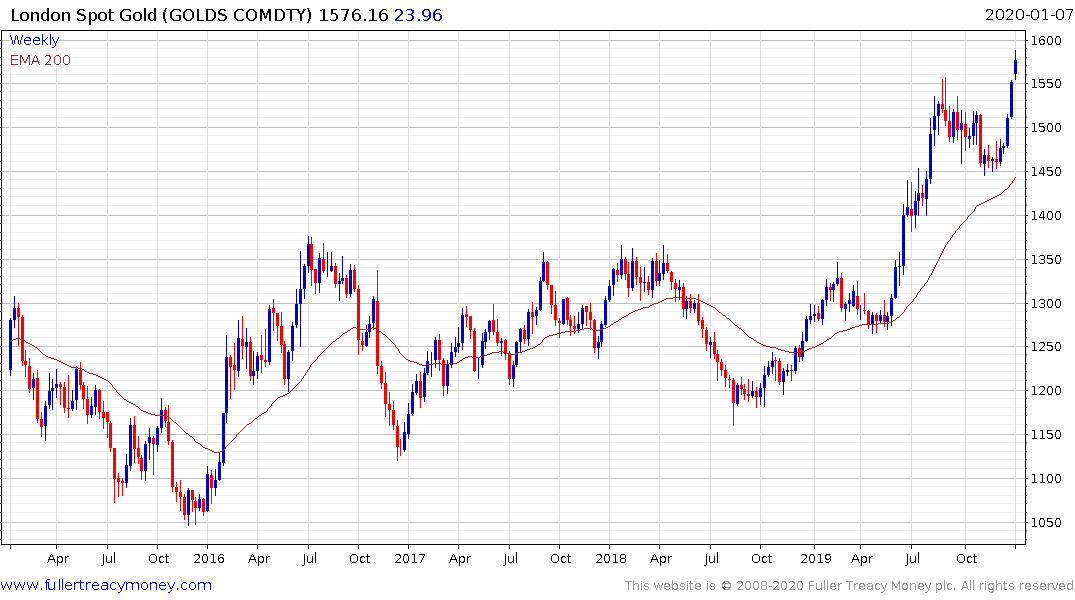 Gold is short-term overbought, having raced to break out to new recovery highs. Some further consolidation of gains looks likely. However, the broader picture from earlier this year is of base formation completion and more recently the completion of first step above that base. That is highly supportive of a medium-term bull market environment at a minimum. 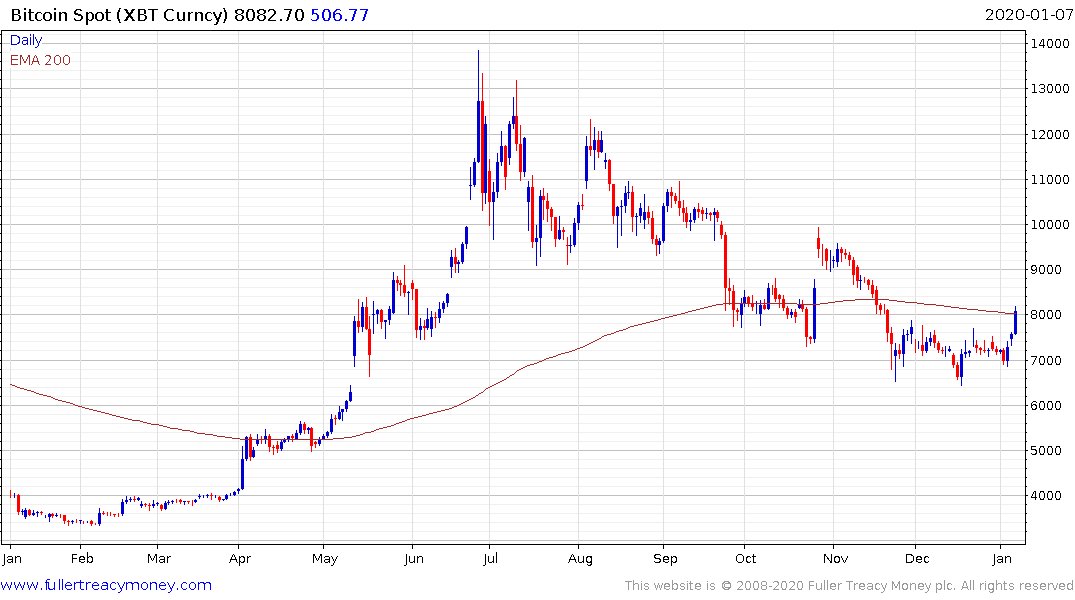 Meanwhile bitcoin lost downtrend consistency in December and is now trading back above the psychological $8000 level. Generally speaking, changes to the consistency of previous trends leads to new trends forming so if the breakout is sustained it is supportive of the recovery hypothesis. That is particularly relevant as the halvening is expected in July.