Gold may have finally snapped out of its inertia.

Prices headed for their biggest gain since March 2017 as of 10:51 a.m. in New York after a slump in global equity markets and data showing slower-than-expected U.S. inflation stoked demand for the metal as a store of value. Futures were set for a third straight gain, the longest rally since Aug. 22.

​Bullion, which touched a six-week-high $1,218.60 an ounce on Thursday, has traded near $1,200 since late August as traders weighed geopolitical risks that could boost the metal’s allure as a haven against rising interest rates that dampen its appeal.

The inflation data may spur the Federal Reserve “to pump the brakes on further hikes,” Phil Streible, a senior commodity broker at RJO Futures, said in a telephone interview. The slump in global equities is also luring investors to “safe-haven” assets, he said.

Gold has been trading in an inert manner for more than a month following a persistent decline from this year’s peak near $1350. To pause in such a narrow band is not characteristic for such a volatile instrument, and gold finally broke up and out to new recovery highs today. 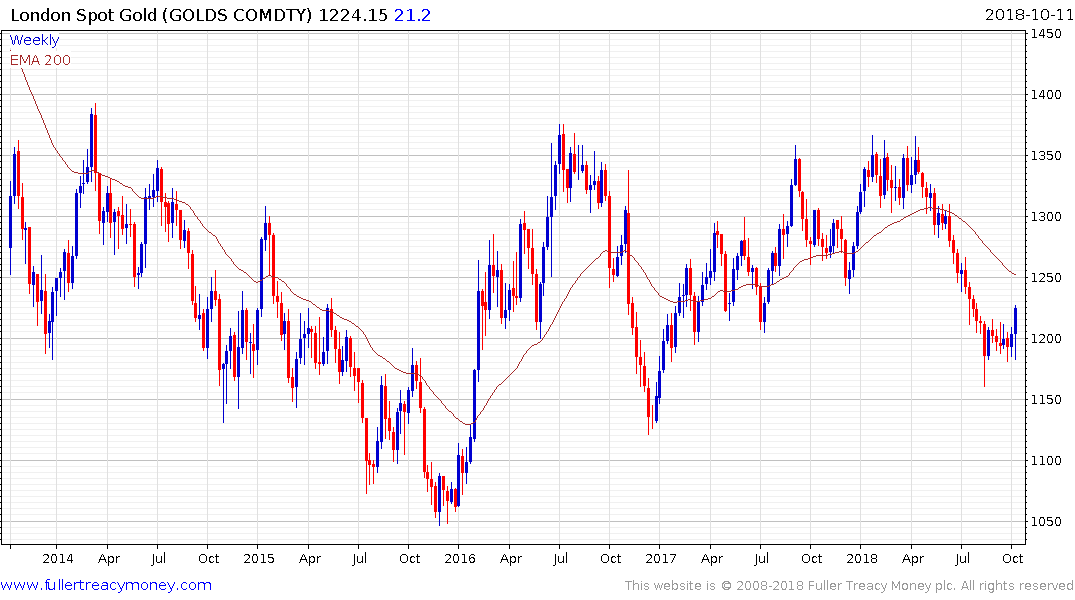 Today’s move breaks the sequence of lower rally highs and is the first clear sign of a return to demand dominance beyond short-term steadying we have seen since early this year.

Gold has been led higher by platinum and silver to a lesser extent. 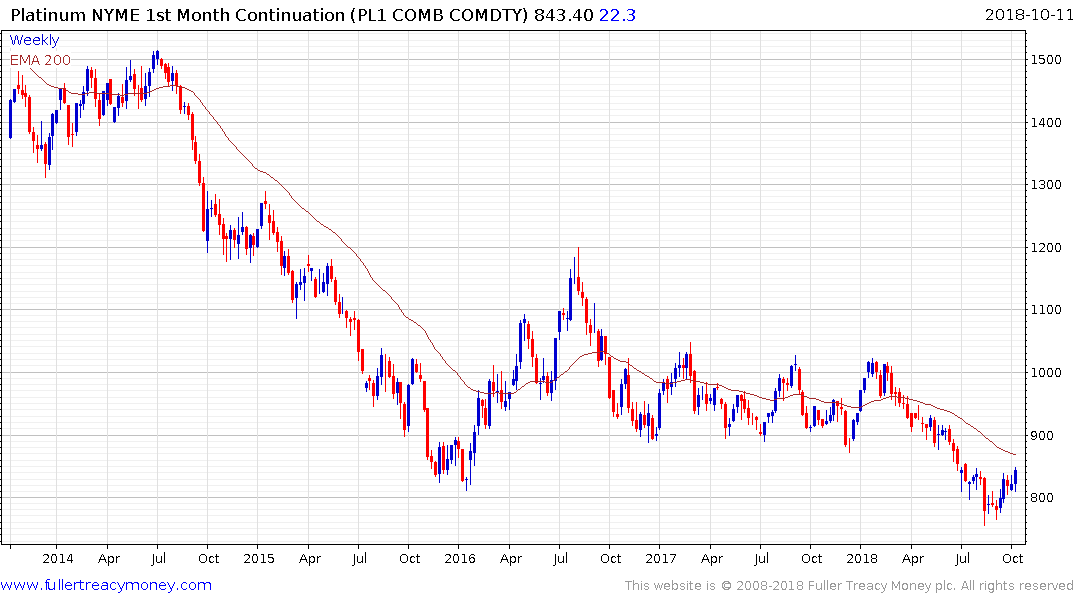 Platinum pushed back up into its overhead trading range last month to trigger a midpoint danger line stop and broke upwards today to test the $850 area. A clear downward dynamic would now be required to question medium-term scope for continued upside. 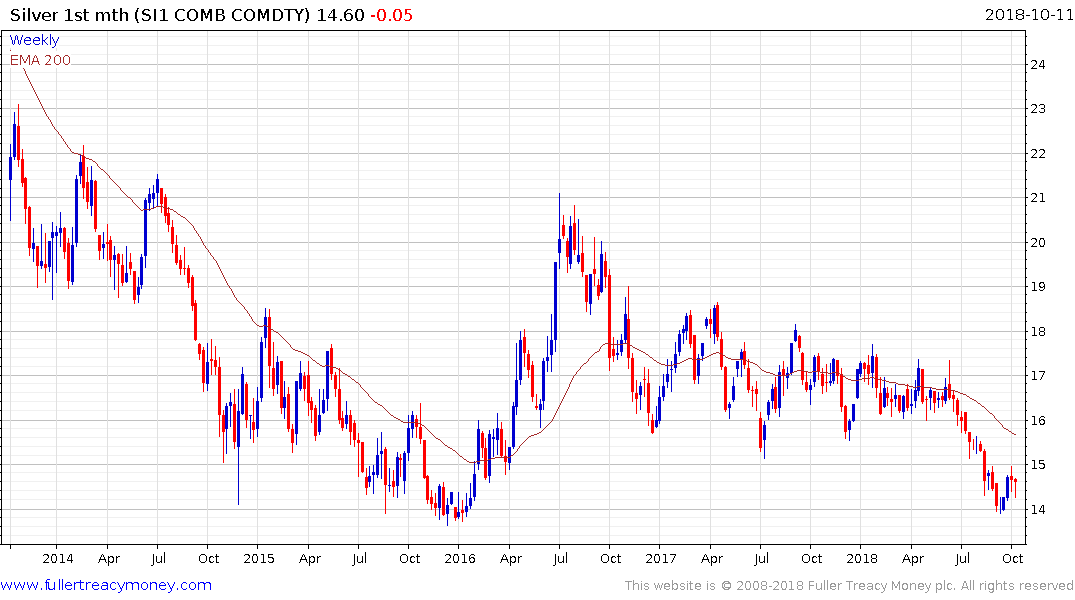 Silver also rallied to testing the upper side of its overhead trading range but then pulled back to test the most recent short-term low near $14.25. It bounced today but needs to sustain a move above $15 to confirm a return to demand dominance. 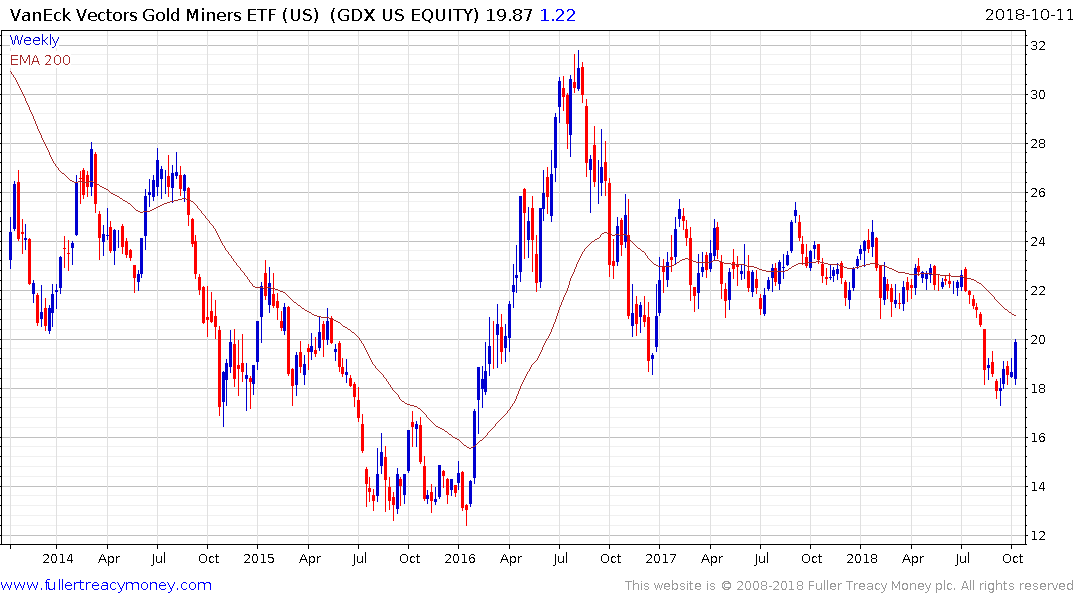 The VanEck Vectors Gold Miners ETF rallied today, hitting a new recovery high, which increases potential for a reversion back towards the mean.