“There were fears of another hot print on inflation, so there is a relief rally,” said Jay Hatfield, chief executive officer of Infrastructure Capital Advisors in New York. Expectations of the Fed tapering “won’t get worse, that was feared.”

The big question for gold investors is whether a sound money, balance budgets, controlled spending movement akin to the Tea Party movement is going to evolve any time soon. Without it there is room for gold to continue trend higher over the medium term.

Donald Trump took over the fringe of the Republican Party by subverting the balanced budget ambition in favour of boosting economic growth on national security grounds. Deficits exploded under his watch and show little sign of stopping now.

The $3.5 trillion budget which the Democrats are attempting to pass represents a significant source of new debt issuance which the Fed will be expected to support. That makes a nonsense of any talk about tapering and at a minimum will slow down plans to reduce purchases.

That the trend of fiscal conservatism and austerity is on the back burner just about everywhere. Europe has adopted mutualised debt issuance and the discipline of containing fiscal deficits is waning as well.

As we come out of the pandemic most people have resolved to live their best life. Saving for tomorrow is not as necessary as in past cycles because people believe the government will intervene to support them financially in the event of an economic setback.

There were several occasions in the bull market between 2001 and 2011 when gold ranged for 18 months and broke out to new highs in the Septembers of uneven years. Since we are now in August, I thought it was worth reminding investors of that primary consistency from the last big uptrend.

The other important characteristic worth remembering is most of gold’s gains happen in very short time frames; in between lengthy ranges. In other words when it goes, it really goes. During medium-term corrections, gold often has a spasm that shakes out weak holders. 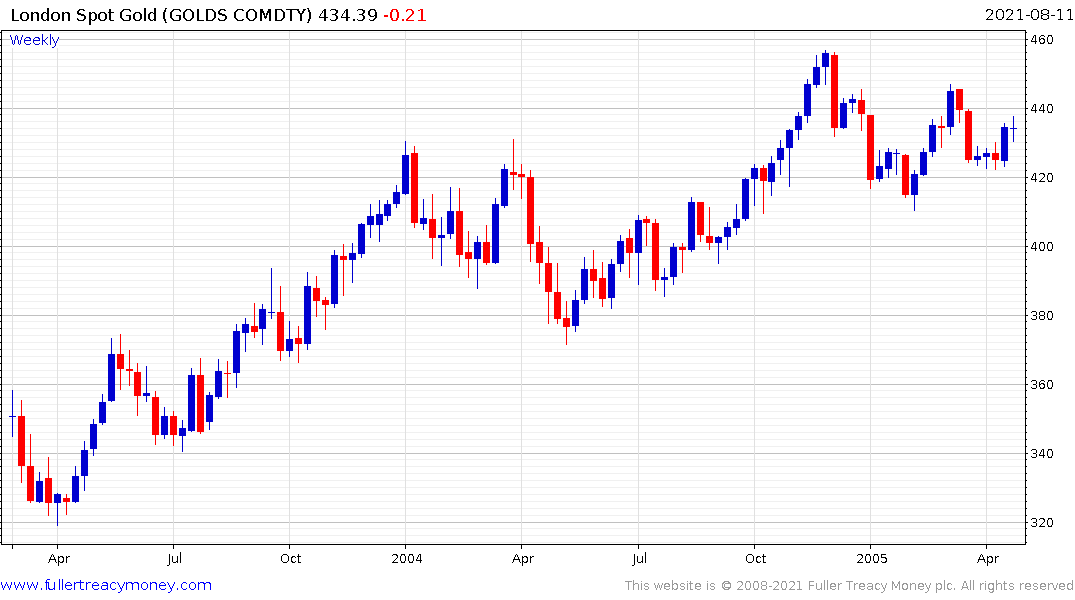 During the 2004 reaction, the price was holding the breakout and was ranging in an orderly manner. Then in April it fell for five consecutive weeks; dropping from $420 to $370. That panicked a lot of traders but it was the low and the price was at a new high within six months. 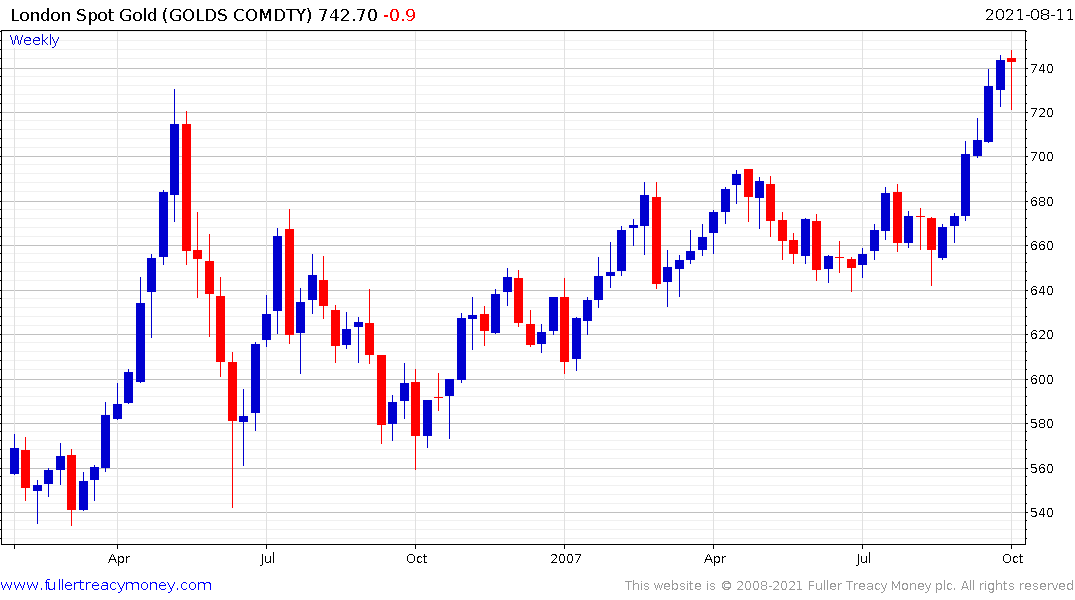 In 2006, the price was quite overextended and pulled back to the trend mean in a sharp manner before bouncing. Between July and October, the price pulled all the way back down to test the low bounced again and within a year was at a new all-time high. 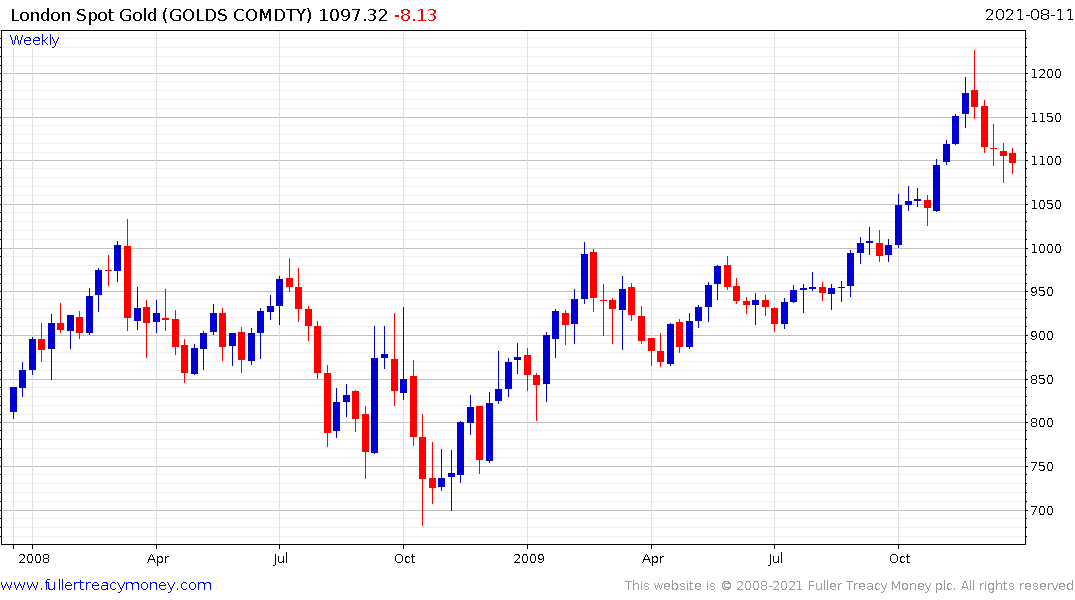 Following the March 2008 peak, the price ranged for five months. It then broke lower in August and eventually found support in October. Within a year the price was at a new all-time high.

After 2009, the chart became a lot more consistent as the pace of the advance picked up. The volatile shakeouts occurred during the Acceptance stage of the bull market. That’s where gold is today. 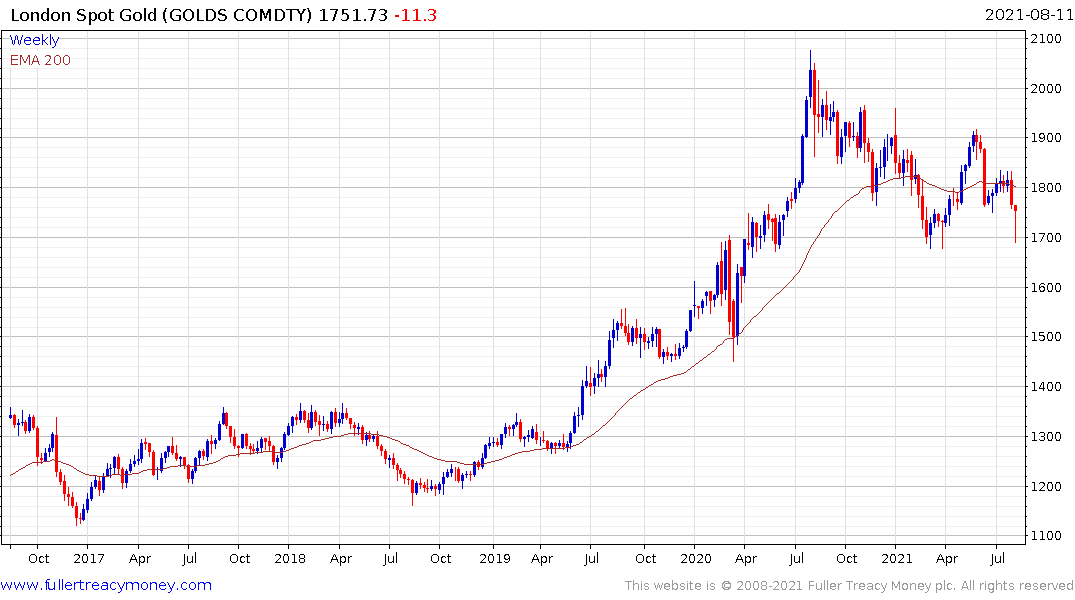 The price was quite overextended when it hit a new high in August last year. Following the bottom in March it was looking like it would recover. Then we got this big dynamic setback to test the low.
This week we’ve seen a rebound. If the trend is going to continue, we are close to the lows now and should expect new all-time highs within the year. 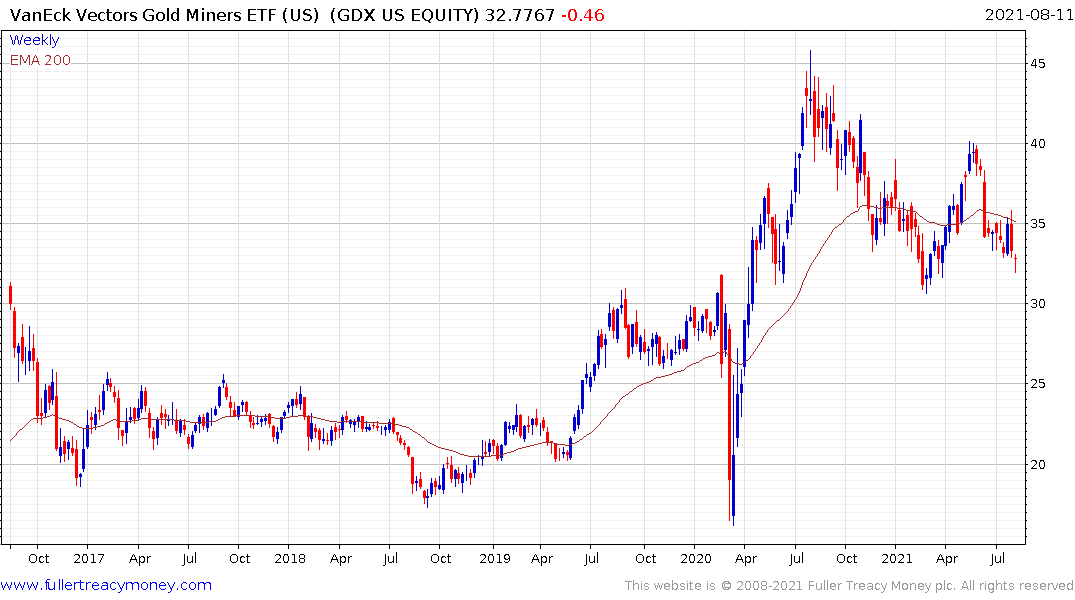 The VanEck Vectors Gold Miners ETF is currently steadying from the lower side of its first step above the base.