Long gold ETPs see US$9.1mn of inflows as price breaks through US$1,300oz and its 200 day moving average on weak Dollar. Soft economic data from the US, coupled with re-affirmed continued stimulus from the Fed, weighed on the US dollar last week, in turn  pushing the gold price higher. Investors appear to have been reassured the Fed will maintain stimulus for a “considerable time” as the “labour market is far from complete”,  according to new Fed Chairman Yellen’s testimony to the Congress. The last time gold traded around these levels was in November 2013, before the Fed started tapering.  Meanwhile, Kazakhstan joined Argentina in devaluing its currency last week, as emerging market currency contagion hit the country, spurring investors’ demand for safe havens. Long silver ETPs also saw net inflows of US$5.7mn, on EM woes and hopes of continued stimulus from the Fed.

Veteran subscribers will be familiar with this chart of the Total ETF Holdings of Gold which trended persistently lower for all of last year. The net result was that institutional selling outweighed physical buying and gold prices experienced their first annual decline in more than a decade. This took a particularly heavy toll on gold miners which were forced to write down their investments in new assets and saw their value return to test the 2001 nadir relative to the metal’s price. 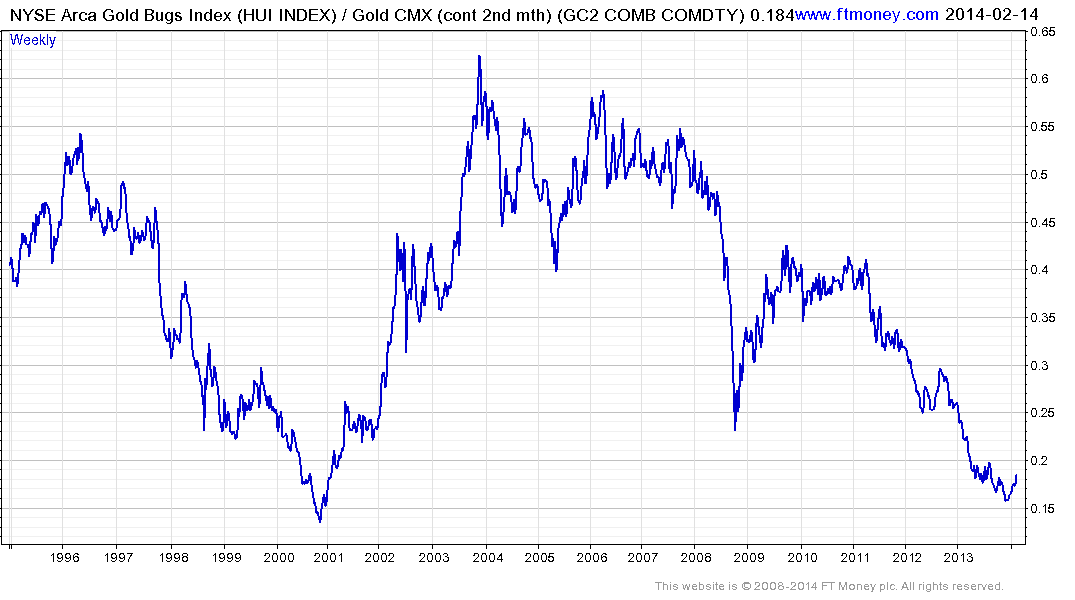 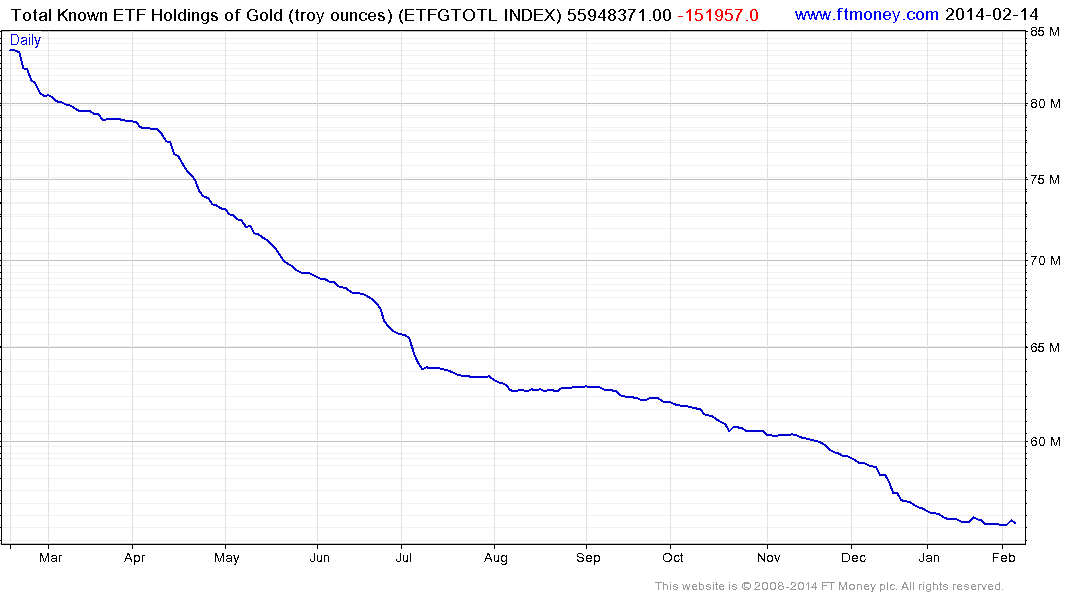 However what became evident towards the end of last week was that gold ETFs had registered their first net inflows in more than a year suggesting that the loss of downward momentum on the chart of holdings is translating into a return of investor interest. 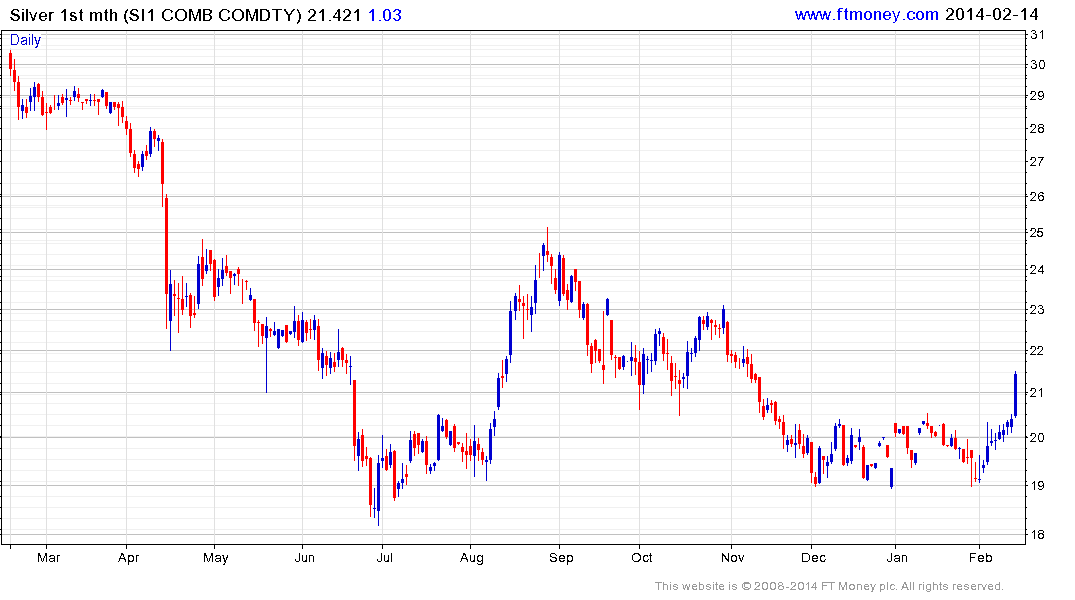 Silver has long been described as high-beta gold and also responded favourably to this development by breaking out of a tight range. A clear downward dynamic would now be required to question potential for additional upside.

I clicked through the gold share sections of my Favourites this morning looking for relative strength. In an environment where the sector has been falling on a confluence of negative factors, companies that show early evidence of relative strength are generally those less influenced by the causes of the sector’s decline. Therefore they have the most risk-adjusted potential of benefitting from the new environment as it develops. 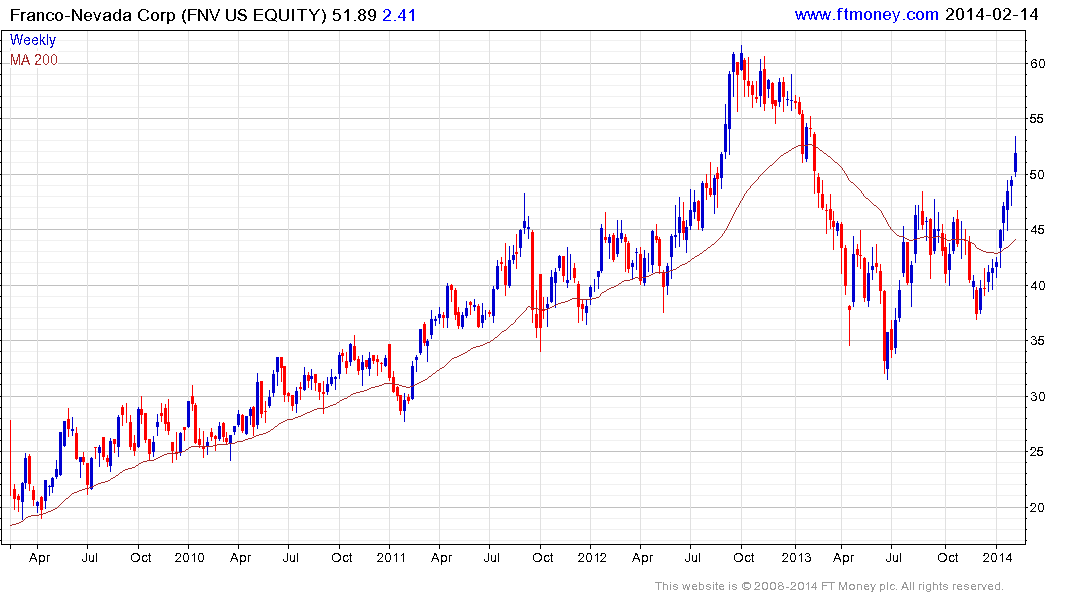 Among companies that pay dividends Franco Nevada (DY 1.39%) and Sibanye Gold (DY 2.05%) deserve particular mention.  Franco Nevada is an income trust which also has energy assets. The share hit a medium-term low in June and posted a higher reaction low in December before rallying impressively over the last few weeks. While somewhat overbought in the very short-term, a sustained move below $45 would be required to question medium-term recovery potential. 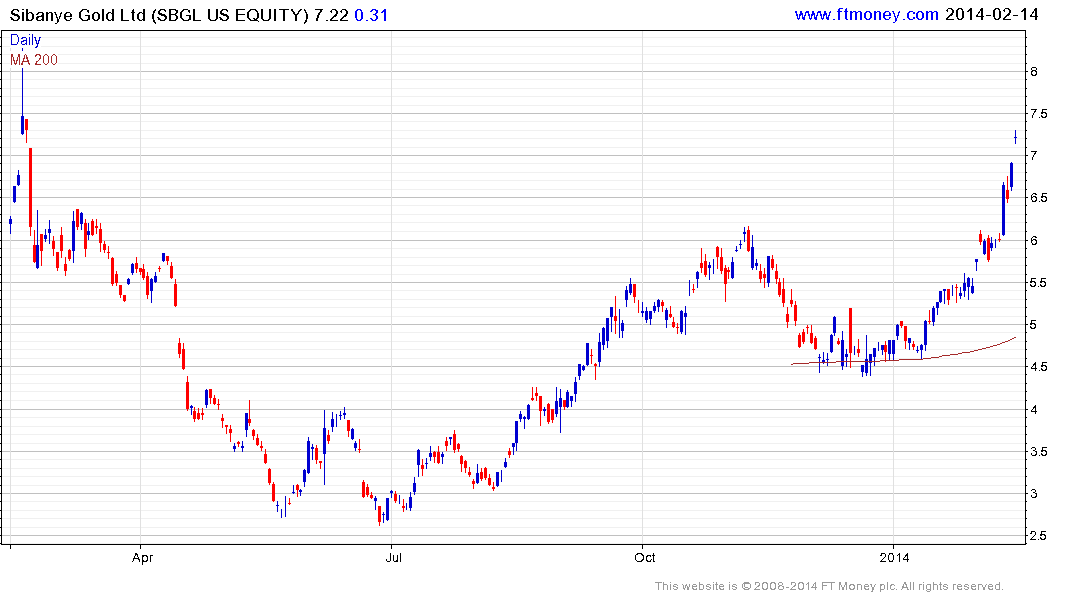 Sibanye Gold was spun off from Gold Fields late in 2012 and is South Africa’s largest gold producer according to its website. The share also bottomed in June and found support in the region of the 200-day MA from December. It is also somewhat overbought in the very short-term so some consolidation of recent powerful gains is possible. However, a sustained move below the MA, currently near $5, would be required to question medium-term upside potential. 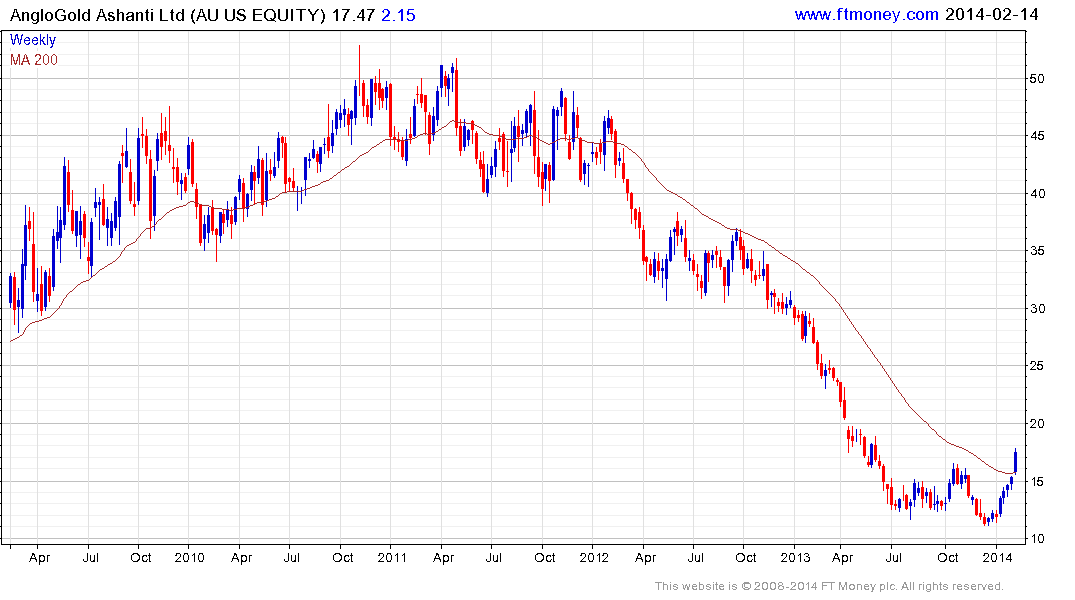 Anglogold Ashanti (DY 0.52%) failed to sustain the breakdown to new lows in December and has rallied for five consecutive weeks to break back above the 200-day MA for the first time in two years. 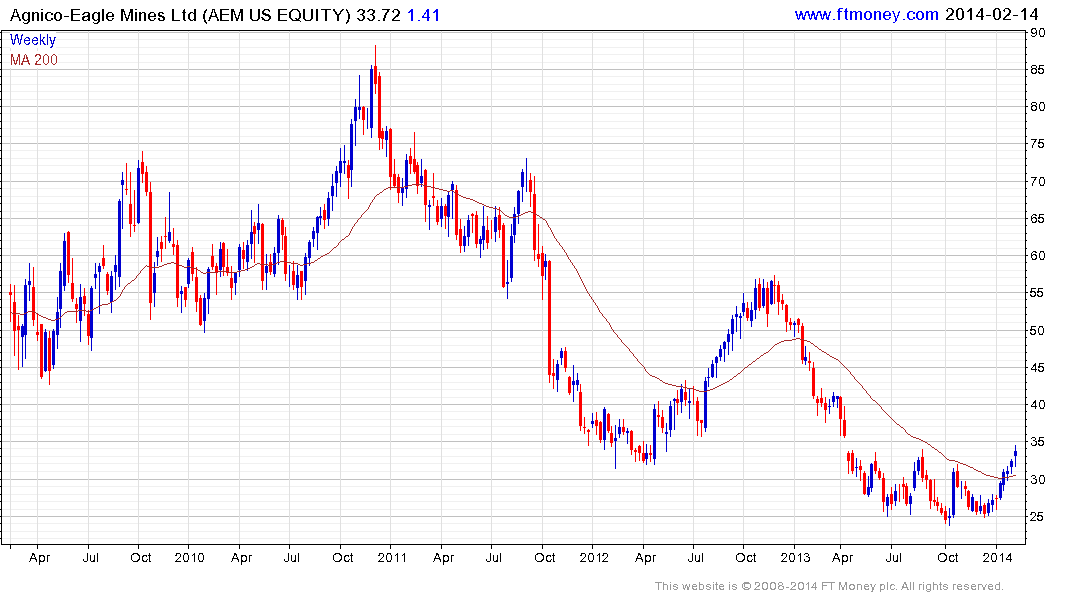 Agnico Eagle (DY 0.95%) exhibits a rounding characteristic within its yearlong base consistent with accumulation. It broke out to new 12-month highs today. 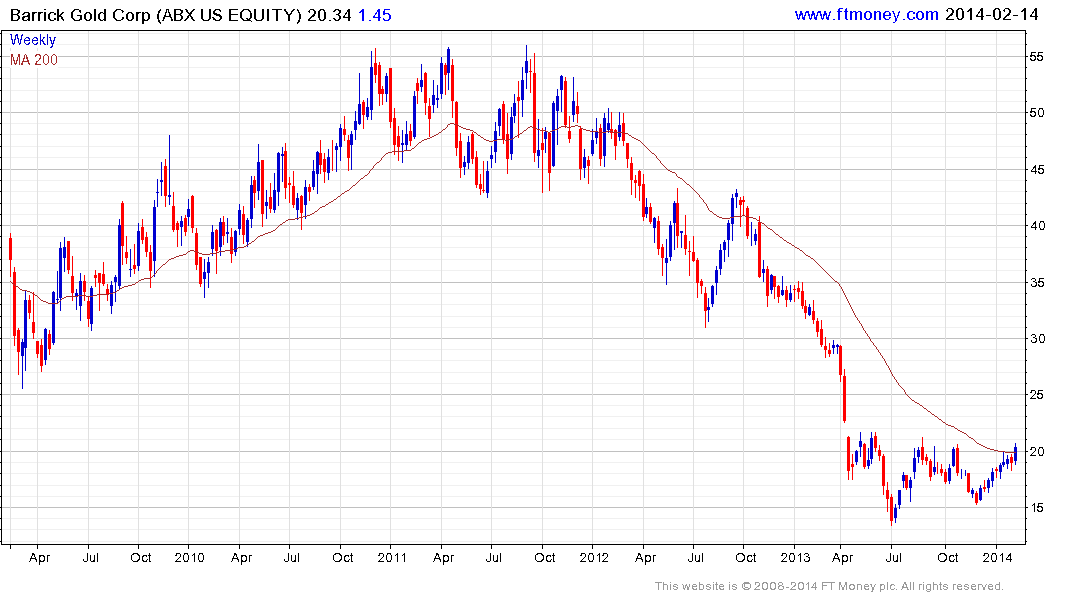 As one of the larger gold miners, Barrick Gold will be of interest to institutions not least as it completes a yearlong base. It pushed back above the 200-day MA in the last couple of days.

Among the constituents of the Junior Gold Miners ETF (GDXJ), Rubicon Minerals has rallied to break a consistent three-year progression of lower rally highs. 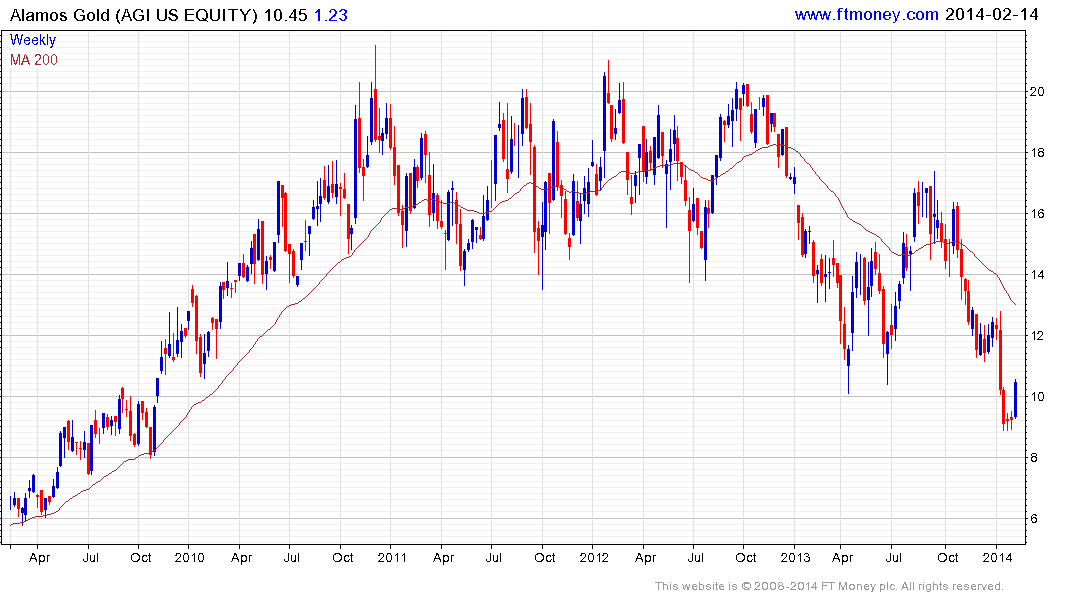 Elsewhere, Alamos Gold (DY 2.2%) has been engaged in a buying spree which has weighed on the share price over the last few months. It found support last week in the region of the 2013 lows and continues to rebound. 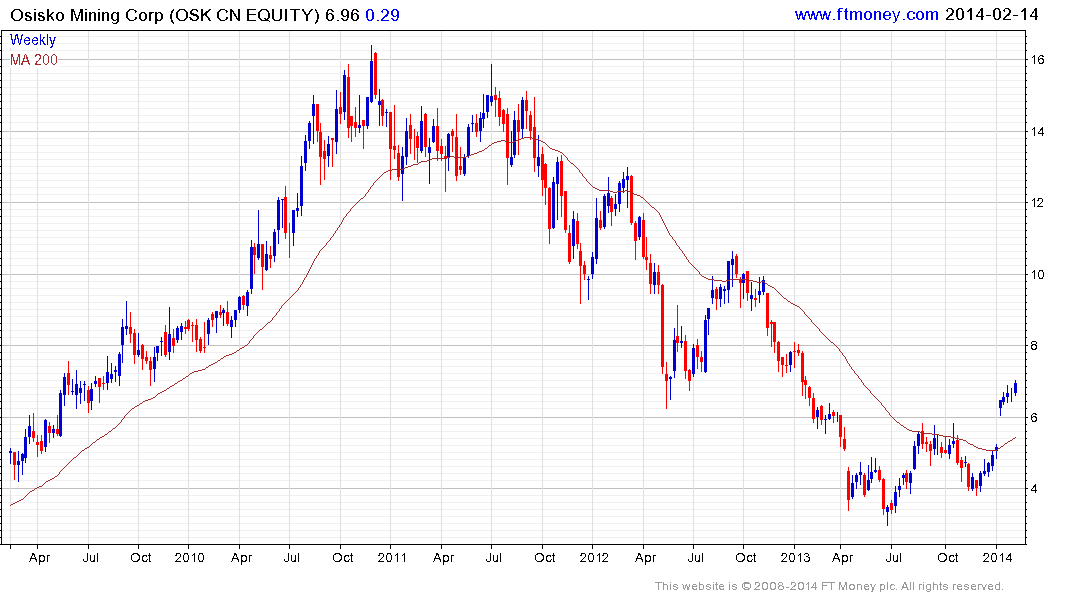 Osisko Mining rallied in January to break back above the 200-day MA following a hostile bid by GoldCorp. While the company refused what it described as an “opportunistic bid” it remains to be seen how well it can defend itself against the overtures of a considerably larger company. 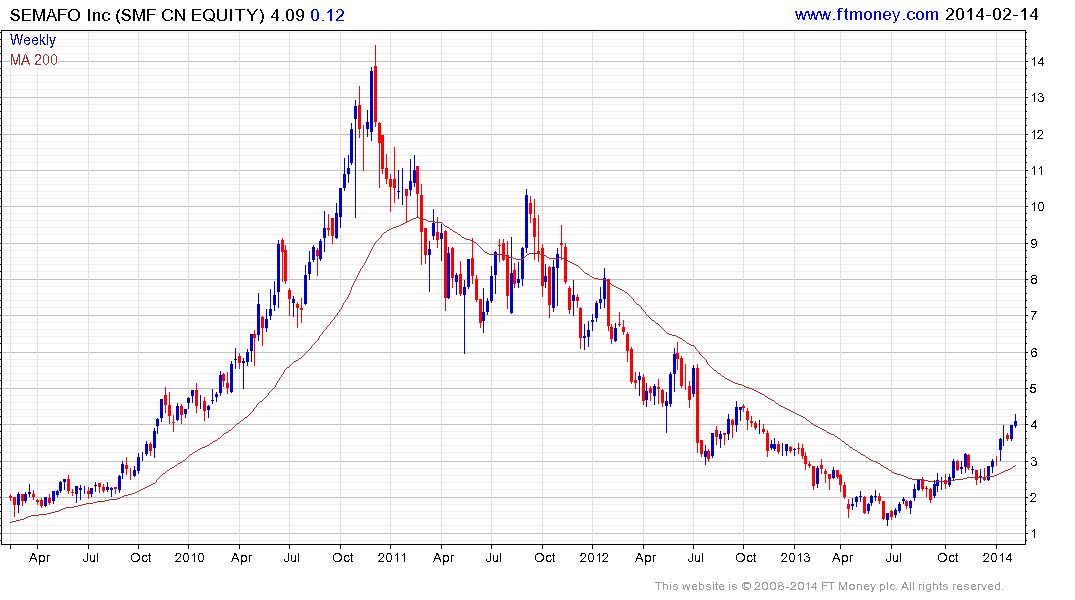 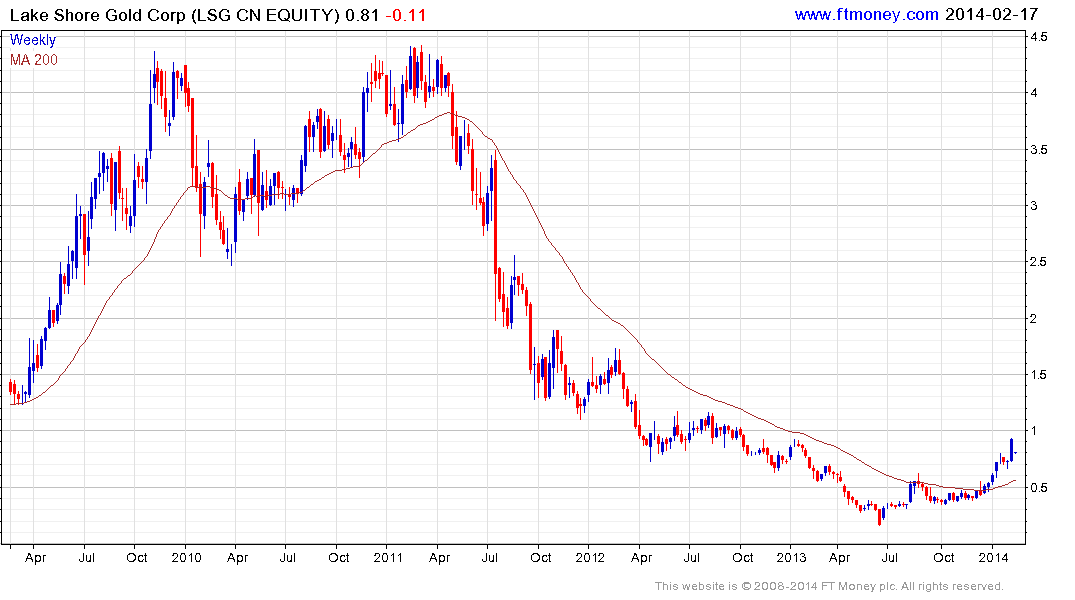 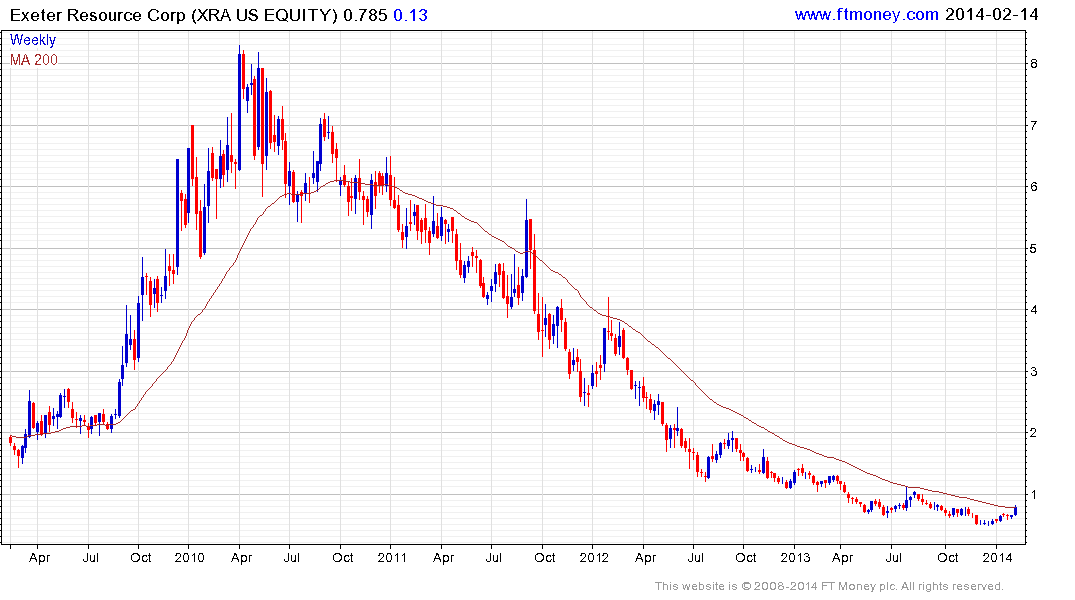 Exeter Resource Corp is a copper/gold explorer with operations in Chile and Mexico but is not yet a producer. The share has trended lower since early 2010 but rallied last week to break back above the 200-day MA.

Considering the fact that declines of more than 80% are not uncommon within the gold mining sector, it reasonable to assume that much of the bad news has already been priced in; leaving the way open for a rerating if fundamentals continue to improve.