Gold caught in the Trump Trade War crossfire; Stress-testing producers at $1,100/oz
Comment of the Day

But ultimately, we expect gold prices to move higher.
The mining industry tends to operate in cycles of over-investment followed by under-investment. We believe that we are still in a period of under-investment in gold (as is the case in many other commodities) following the lengthy commodity bear market over 2011-2016. We believe that global gold production has peaked, and current prices are insufficient to sustain production and replace reserves. We believe gold prices of >$1,350/oz are required to incentivize large greenfield gold projects.

Risk/reward trade skewed to the upside
The most recent cyclical bottom in gold of $1,051/oz came in December 2015 with the S&P/TSX Gold Index (in US$ terms) at 729. At the same time, copper was at $2.06/lb and WTI oil was trading at $35/bbl, both of which are unsustainable prices, in our view. We believe that period was driven by fears of a significant slowdown in China which ultimately did not materialize. With the S&P/ TSX gold index currently at 899, retesting the December 2015 low implies 19% downside from here and 11% downside in the gold price. Conversely, assuming global growth continues, and the USD strength fades, we see ~15% upside in gold and 50-90% upside in the equities by reverting back to recent highs. 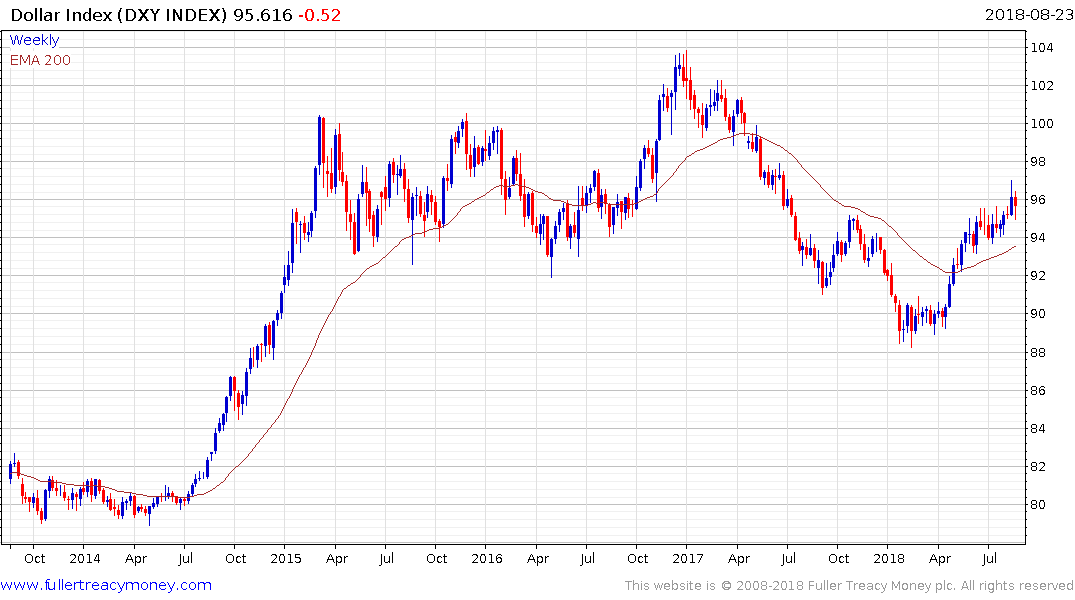 The US Dollar Index trended lower for most of 2017 and over the course of the last few months has unwound about half that decline. However, the Dollar’s relative strength against some of the most liquid emerging market currencies such as the Turkish Lira, Argentinean Peso, Venezuelan Bolivar, Brazilian Real, Chinese Renminbi is what is animating investors right now. That story is more about the weakness of their respective economies and their exposure to US Dollar denominated debt that the particular strength of the US Dollar. 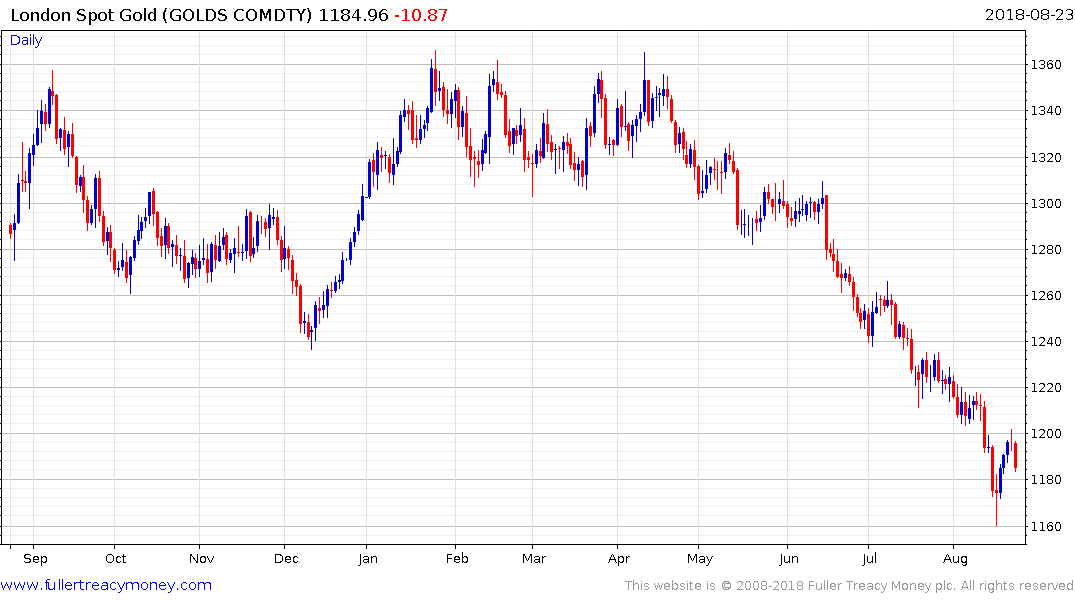 The primary issue for gold is that these relative tailwinds for the Dollar are not over. The gold price pulled back today from the psychological $1200 level and the four-month progression of lower rally highs remains intact. 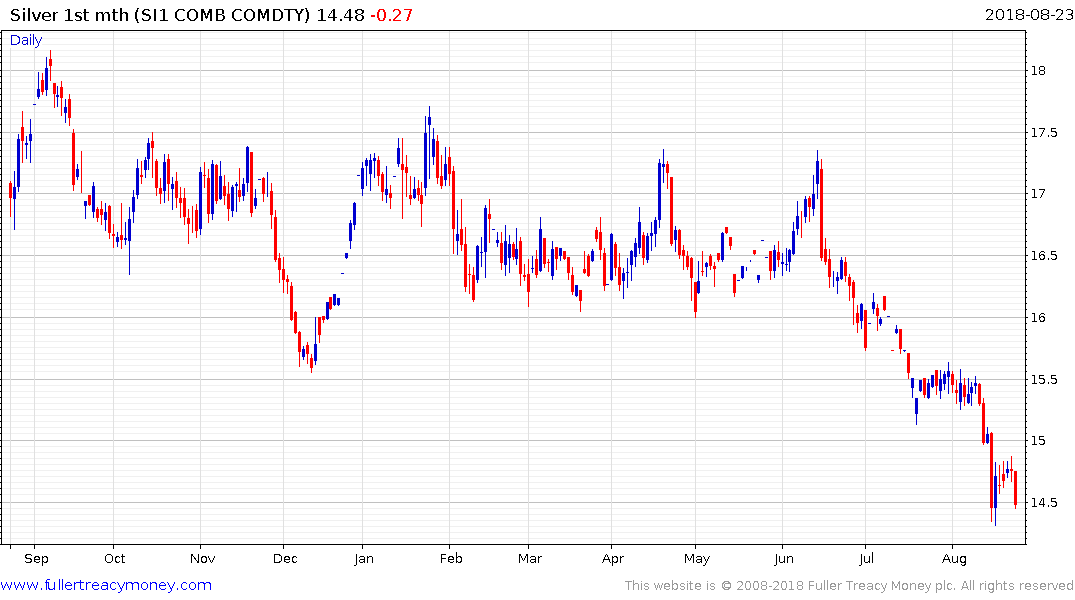 Silver’s rebound has so far been relatively feeble with a clear absence of upward dynamics. It needs to sustain a move above $15 to begin to pressure shorts. 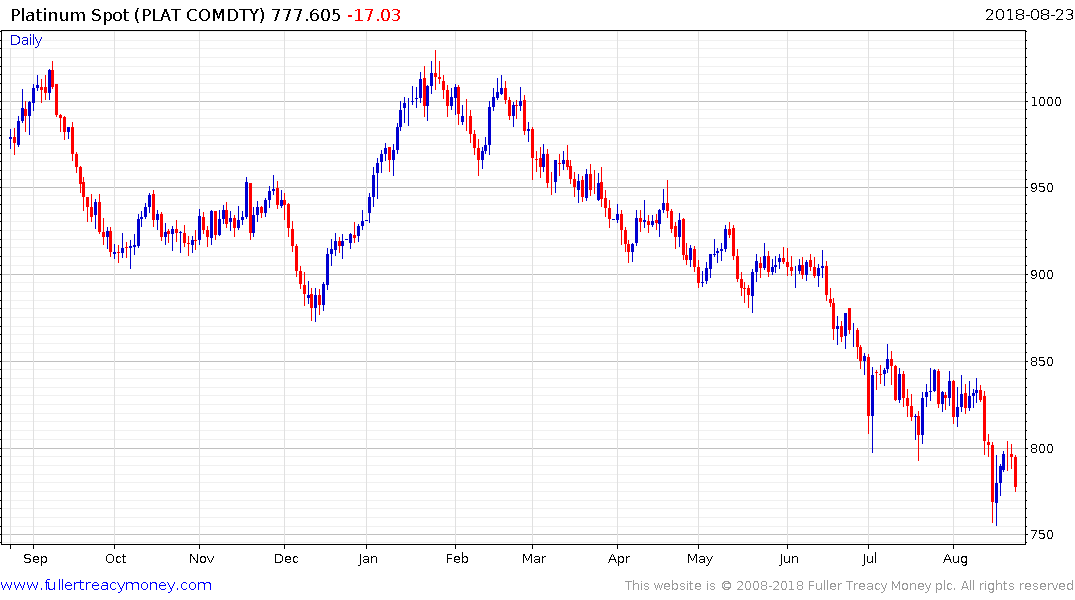 Platinum has so far failed to sustain a move back above $800 and pulled back from that level today.

So far, the downtrends in precious metals remains consistent and counter trend rallies have relatively muted. Until that condition changes it would be rash to conclude a meaningful low has been found. 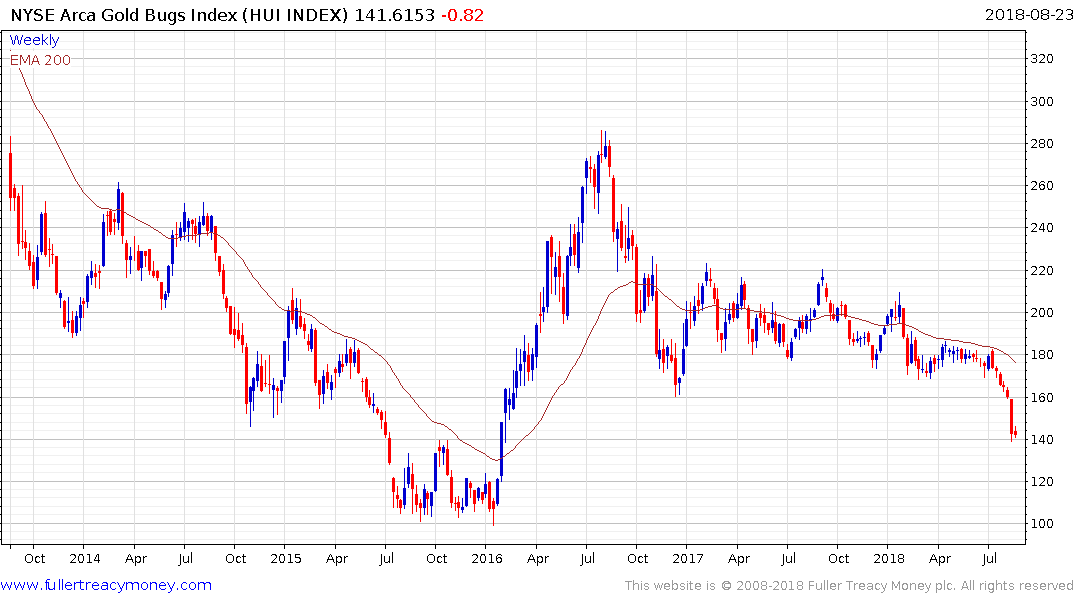 The Gold BUGS Index broke downwards to new reaction lows last week and remains in the region of its lows.