Here is a link to the full note and here is a section:

In the same way that bond yield forecasts tend to always call for higher yields, the market is consistently surprised that the US inflation outturn undershoots expectations (chart below). Hence it is curious that investors have not absorbed the current deflationary reality.

The slump in inflation feeds into the core of my Ice Age thesis and concerns equities too. Nominal GDP growth will slow further (blue line in chart below) and drag down analyst forecasts of long-term eps growth, which are already weighed down by the ongoing profits collapse.

The slump in core CPI is bringing the Japanification of US nominal growth (see left-hand chart below) to an economy already heaving with debt. As this will trigger a further decline in L/T eps, nose-bleed expensive PEG ratios will likely be fatally undermined. Before markets can properly embrace The Great Melt, they first need to comprehend the new normal: deflation has arrived.

There is probably no more important question than in which direction bond yields are likely to move. Is the Anglosphere moving increasingly towards negative yields or are we on the cusp of a revolt which will see interest rates rise? 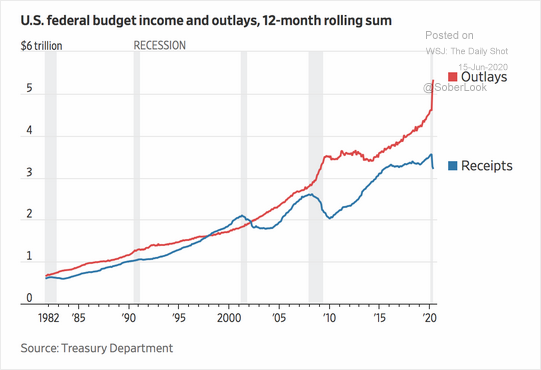 With the US deficit rising at an eye watering pace while tax receipts lag, the sustainability of the debt accumulation is obviously a major consideration. Its continued trend relies completely on full throated adoption of modern monetary theory which entails the Fed will buy whatever the Treasury issues. So far, so good. 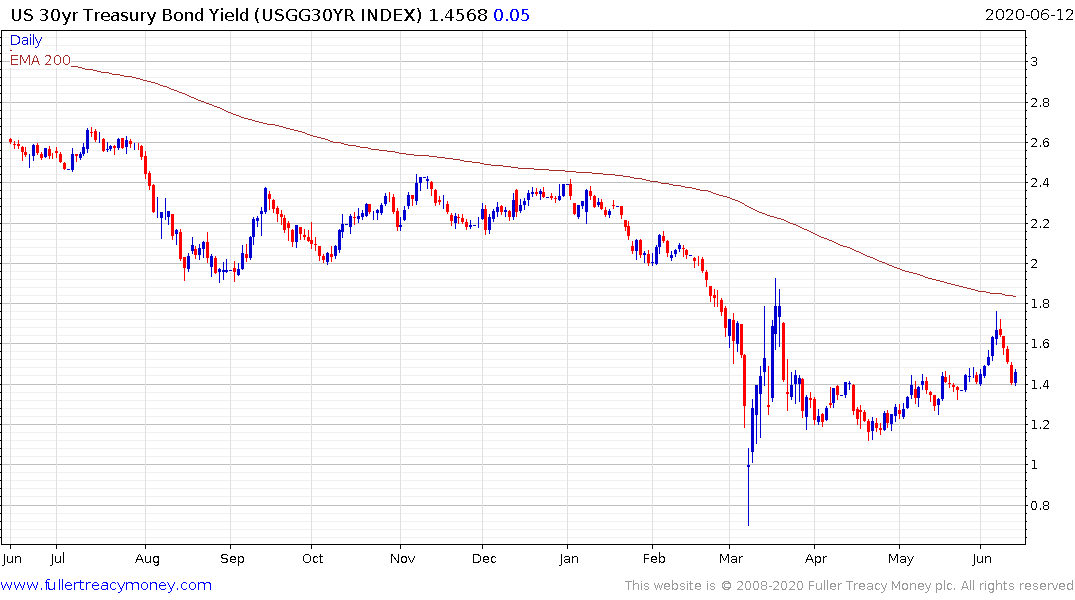 Inflation is most likely to show up first on long-dated bonds. 30-year yield continue to hold a sequence of higher reaction lows but the advance has been modest. A sustained move above 2% will be required to confirm inflation is returning as a major theme.

Perhaps the greatest measure of inflation is when people act as if they believe inflation is going to be an issue. That means front loading purchases now, for fear of rising prices later.

Houses price in the USA and UK increased during the lockdown. Arguably, that is because of reduced supply and lower interest rates. However, if that strength is sustained through the summer, that would certainly help to feed inflation figures. Vehicle sales are also picking up.

Mrs. Treacy did 50% of last year’s annual sales on Etsy in two transactions over the weekend. Both were for bulk purchases of Akoya pearls, following a mild price increase. That certainly looks like frontloading of purchases to me.

Edwards is looking for a valuation contraction on par with Japan’s before we see inflation take off. A decade ago, there was an argument that Japan’s high P/Es were structural. However, that proved to be an ill-founded argument. The P/E ratio finally bottomed in 2018 around 12 and is now back around the upper side of the range. The S&P500’s P/E bottomed in 2011 near 12 and is now at 21.4.

Corporate leverage is already elevated and will become more so in the event of additional deflation. Meanwhile, inflation brings back pricing power, but refinancing becomes a significant headache. That would take a significant toll on company finances.