Global Money Notes #24 Sagittarius A*
Comment of the Day

…as they imply the conflicted existence of two uncapped facilities: a foreign RRP facility that sterilizes reserves and adds to collateral supply and a standing repo facility or an asset purchase facility built to add reserves and absorb collateral. That makes no sense…

…it has to be one or the other. If the standing o/n repo facility or an asset purchase facility (or “mini-QEs”) are the future, an uncapped foreign RRP facility must be the past. Whether the Fed provides a technical fix with or without an uncapped foreign RRP facility, we don’t think a technical fix is the right solution for the problems caused by the inversion. All this brings us back to the rationale for more rate cuts – a series of rate cuts (see here).

The US Treasury has a substantial funding requirement this year with upwards of $600 billion in bonds maturing. Coupled with the increased demand for collateral from the reverse repo facility and the increased deficits agreed to as a way of avoiding a government shutdown that suggests significant bond issuance. Ensuring that issuance comes at as a low of yield as possible and with as long a maturity as possible is likely behind speculation on 50-year and 100-year bond issuance.

The bond market is already pricing in significant additional rate cuts and these above considerations lend weight to that view. The underperformance of the Russell 2000, banks and transportations indices suggest some pressure from the trade war is apparent. Meanwhile the consumer is still in robust health with low unemployment and rising consumption. The stock market remains quite steady and is, importantly, trading above its 200-day MA. 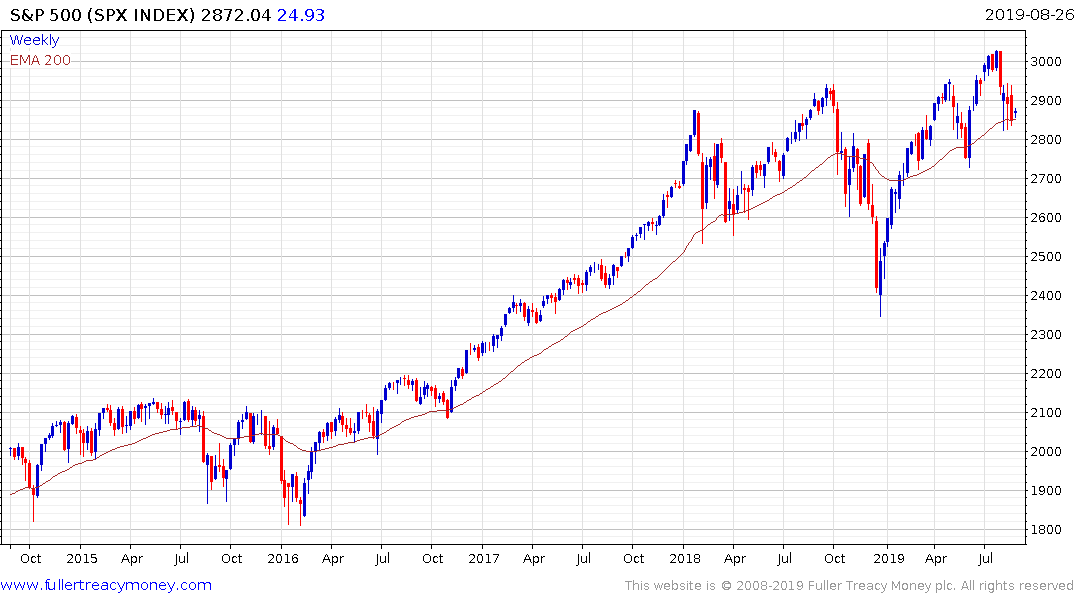 A majority of stock market sectors sport yields higher than Treasuries. If the negative yield environment spreads to the USA and UK, where the majority of dividend aristocrats are listed, it has the potential to be a powerful additional bullish catalyst for bond proxy stocks.

The risk of recession meanwhile resides in the potential for the trade war to impact company prospects which results in layoffs, higher unemployment and therefore lower consumption. Therefore, the trends in the stock market remain important to monitor.