Global Macro Forecast - A diverging world
Comment of the Day

Brexit “fudge” and lingering uncertainty
In recent weeks, fear of brexit without a deal has risen, sending the GBP to its weakest level against the EUR since autumn 2017. The reason is the EU’s rejection of the UK’s current proposal for a future relationship, and the subsequent UK threat that it can walk away from the negotiating table, underlining Theresa May’s claim that “no deal is better than a bad deal”. However, “no deal”, as most see it, is bad for the UK, at least short term, and there is no majority for this solution in the UK parliament. As time is running out before brexit Day on March 29, 2019, we believe the most likely scenario is that the UK and EU manage to agree to, and ratify, a stripped-down brexit treaty, covering the backstop for the Irish border, the exit money and citizens’ rights. We believe they will “fudge” a solution for all other issues, essentially leaving them for later, with a vague political agreement on future intentions. This would allow the transition period to take effect once the UK exits in March, but where the UK-EU future relations are headed would remain an open question.

Bank of England to hike no further
We believe brexit uncertainty will prevail and continue to weigh on GDP and wage growth. Our forecast for GDP growth and inflation is below that of the Bank of England (BoE) and consensus. Accordingly, we expect the policy rate to be lower. The dynamics of the BoE Monetary Policy Committee could also be affected ahead, as Jonathan Haskel replaces Ian McCafferty on September 1. Haskel, who is an economics professor at London’s Imperial College, is expected to be a rather dovish member, while his predecessor has been considered a hawk. Haskel has, for instance, pointed to persistently weak wage growth in the UK and said there could be more slack in the labour market than currently estimated. We believe the August rate hike from the BoE to be the last for the coming two years. The GBP is currently weaker than our forecast, largely due to the increased fear of a “no-deal” brexit, in our view. We believe the latest weakness could be somewhat overdone, but expect the currency to continue to weaken in the longer term.

The one certainty we have is that there are a large number of people who are not going to be happy with the result of the Brexit negotiations. The big challenge for the UK and a point which I have not seen discussed at length is that the role of manufacturing remains in a secular downtrend and the primary employment growth in the economy has been from the service sector. However, the service sector is an amorphous term which includes everything from lawyers to hairdressers and hotel cleaners.

The high paying jobs which the UK needs to hold onto are concentrated in the high-end manufacturing, automotive, aeronautics and defense sectors. Meanwhile the City of London is one of, if not the largest global centres for high paying jobs in the financial sector. Now that the UK is an energy importer, it needs to protect its revenue streams as much as possible. This article from Gizmag highlights how innovation is happening in the tidal power sector but the financial sector remains the most important revenue generator for the economy.

The only way to do that in a Hard Brexit scenario is to adopt a libertarian, free market, low tax, low regulation economic model that would make the UK an indisputable destination for investment. That transition would be disruptive but arguably would be a long-term benefit. The problem is there is not much appetite for that kind of revolutionary thinking and the prospect of muddling through in a post Brexit world is the most likely possibility given the current sclerosis in the May administration. That is one of the primary reasons the Pound has been so weak. Against that background, and considering the majority of lawmakers did not in fact vote to leave, the most likely outcome of negotiations is there is either going to be an agreement to extend the talks, fudge the agreement or move towards another referendum laying out exactly what is at stake on both sides of the argument. 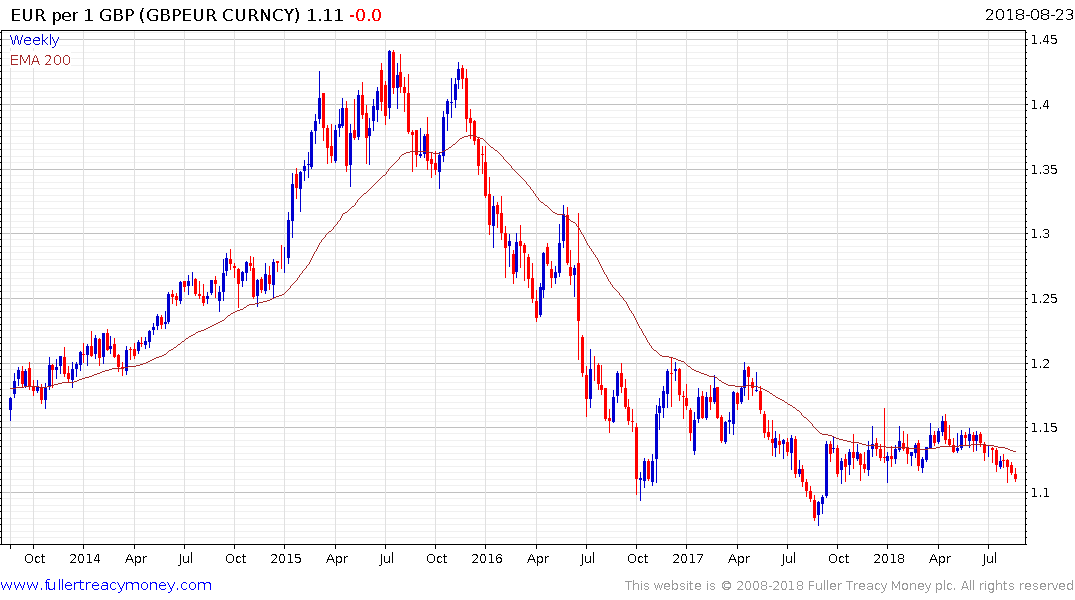 The Pound is back testing its lows versus the Euro. It has bounced dynamically from the €1.10 region on two occasions since the first referendum and therefore investors are likely asking whether the same is possible on this occasion.