German Fiscal Stimulus Already Creeping In, Whatever Merkel Says
Comment of the Day

The government considers it’s still not clear whether Germany will plunge into a full-blown recession and, as a result, the full array of remedies may not need to be deployed.

Germany’s five leading research institutes slashed their forecasts for economic growth this year and next, citing trade tensions and Brexit weighing on German industry. GDP is to grow 1.1% in 2020 from a previous forecast of 1.8%, and 0.5% this year from an earlier prediction of 0.8%.

Traditionally, Germany shifts to high alert whenever the global economy looks to be slowing -- the country’s dependence on exports means that it tends to head south with the rest of the world. But with the domestic market still relatively robust and the ECB renewing monetary stimulus, Merkel’s economic team judges that this time the path toward recession is less certain.

On the down side, a prolonged trade war could eventually lead to a much bigger fallout than expected, according to another scenario being considered. That spurred the government to gradually increase investments and bolster the labor market as a preemptive and precautionary measure.

Finance Minister Scholz told ARD TV on Wednesday that economic forecasts are pointing toward a recovery and that there is currently no need for a stimulus program.

“We are well prepared because we have good financial resources and can react, should it really come to an economic crisis but so far it’s just slower growth,” Scholz said

The bond market has been signalling for a while that all is not well in the global economy. The fact that just about all of Germany’s sovereign debt is trading with a negative yield is as much about the outlook for global growth as it is about the ECB’s negative interest rate policy. The Eurozone has been relying on the strength of the export sector to pull growth higher but the slowdown is exposing the absence of a clear domestic demand story to offset the slowdown in demand.

While clear signalling for the end of the austerity program remains unlikely, there is evidence of fiscal laxity creeping in all over the continent. Italy, France and Spain are already engaged in fiscal stimulus and it is only a matter of time before Germany deploys its balance sheet to support the economy.

In the meantime, the question investors are asking is whether the slowdown in Chinese demand is going to reverse. China clearly signalled more than a year ago that they do not want to engage in the same kind of stimulus package as the one deployed in 2009. They are rightfully worried about asset price inflation and the risk of further inflating the property bubble. The impact of that lack of a surge in infrastructure development is being felt globally, but most particularly by major industrial exporters. 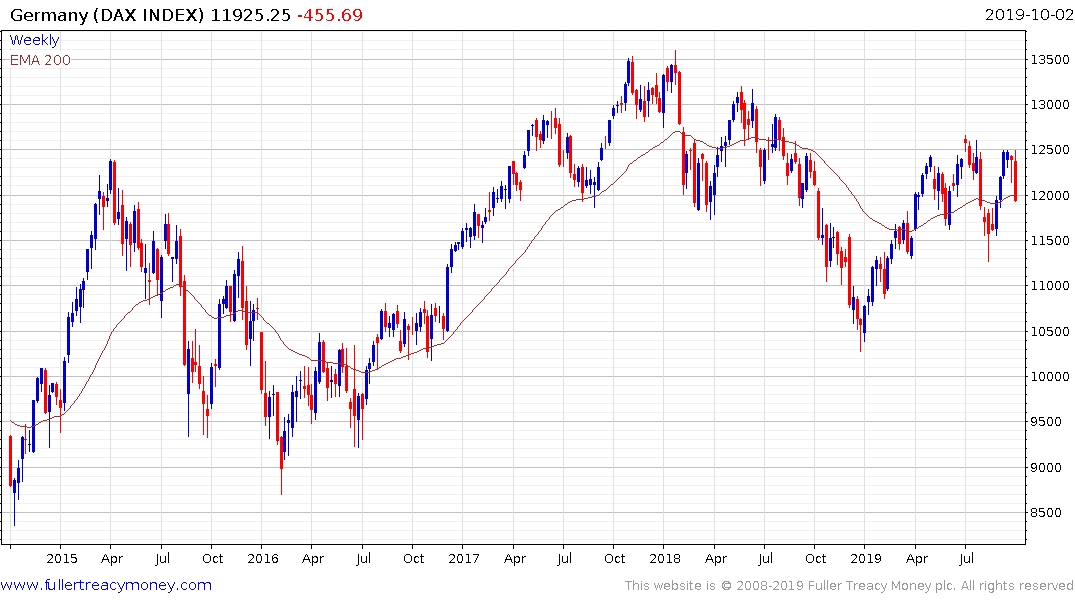 The DAX posted a downside key day reversal yesterday and followed through today. That signals a peak of at least near-term significance.