Demand for the safest fixed-income assets is waning after the euro area returned to growth in the three months through June, having contracted for the previous six quarters. The region's economy will expand 1 percent next year and 1.4 percent in 2015, after shrinking by 0.4 percent this year, according to the median of analyst estimates compiled by Bloomberg.

German securities lost 1.8 percent this year, according to Bloomberg World Bond Indexes. Italy's earned 7.1 percent and Spain's returned 11 percent as the sovereign debt crisis that roiled the region since 2009 started to ease.

Despite the fact that Jens Weidmann continues to express the Bundesbank's reservations about excessive monetary accommodation, the likelihood of the Eurozone tightening policy anytime soon remains low. In fact, the need for low interest rates and abundant liquidity has been of particular benefit to Germany which saw its debt take on safe-haven status. At least part of the logic for this surge in demand was that if the Euro were to break up, Germany's sovereign debt would be redenominated into a strong currency. 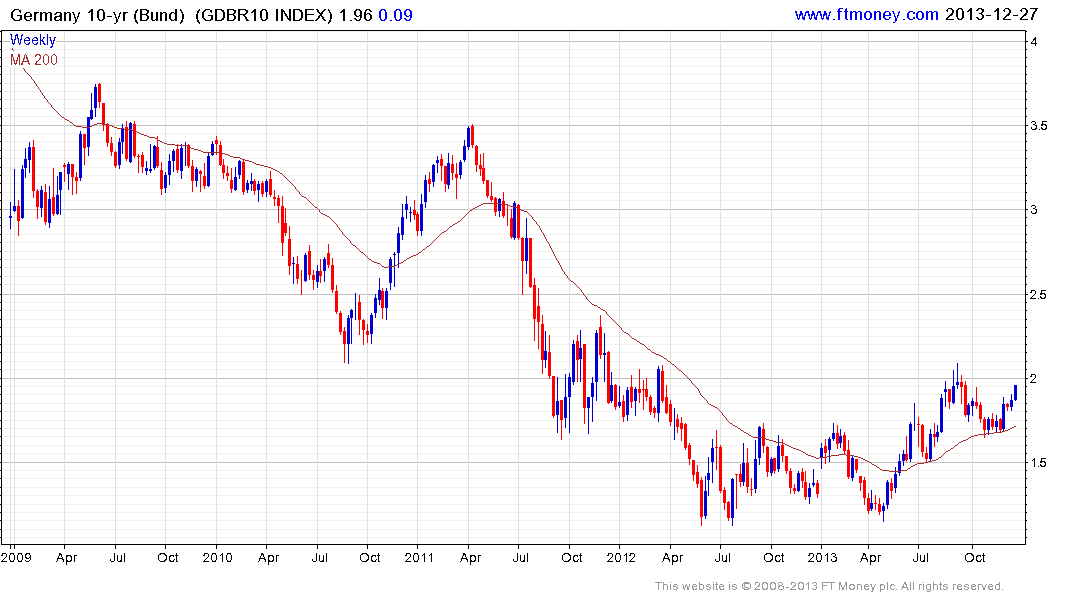 10-year Bund yields fell to test the 1% level between 2012 and August 2013 but have since rallied to break out of the yearlong base. As confidence improves and speculation that the Euro is going to breakup recedes, the need to hold such an overweight position in German debt has decreased. We have already witnessed at least a partial removal of the risk premium attached to the Euro and the DAX but so far German Bunds have been reasonably steady. This would suggest that there is significant potential for additional weakness in bond prices and therefore upside for yields.

German 10-year yields have steadied in the region of the 200-day MA and a sustained move below 1.6% would be required to question medium-term supply dominance.