GDP growth, miners not enough to boost market
Comment of the Day

"Today's GDP data underscores why we shouldn't be too concerned about the economy right now," Aberdeen Asset Management senior investment manager Jasmin Argyrou said. "Some of the worrying trends in confidence we saw late last year have reversed and although investment activity is subdued, household consumption has held up surprisingly well. This is ultimately the key for the investment outlook." The reason the sharemarket did not respond to the data, Credit Suisse analyst Damien Boey said, was that investors are focused primarily on yield rather than growth. "Stocks have reached a point where changes to the earnings outlook or the GDP outlook at the margins don't really have a big impact, given that valuations are kind of extended," he said. "Maybe they're looking for more rate cuts as the only way up." ​Bond yields rose on Wednesday and that was enough to send the market lower, he said.

Australian investors have been heavily invested in high yielding domestic shares, primarily banks, in order to benefit from full franking. The relative value proposition has also been bolstered by historically low interest rates and a resources sector which has been a subpar performer since 2009. 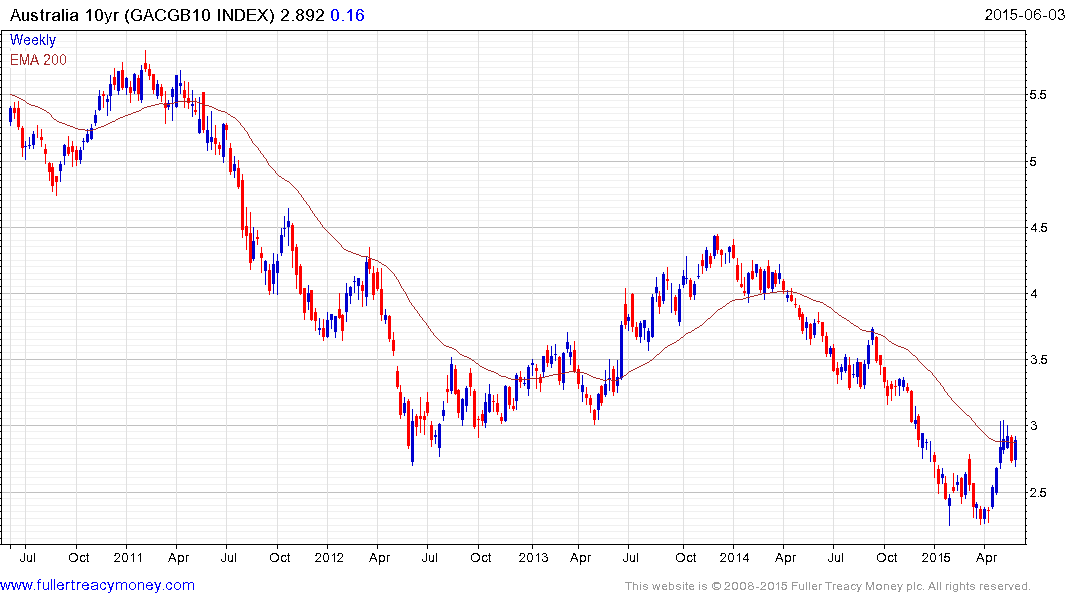 Australian 10-year government bond yields share a high degree of commonality with their other developed market counterparts. The yield has jumped over the last couple of weeks to break the yearlong progression of lower rally highs and is now trading in the region of the 200-day MA. The 3% area represents an area of prior resistance and a sustained move above it would confirm more than temporary supply dominance. 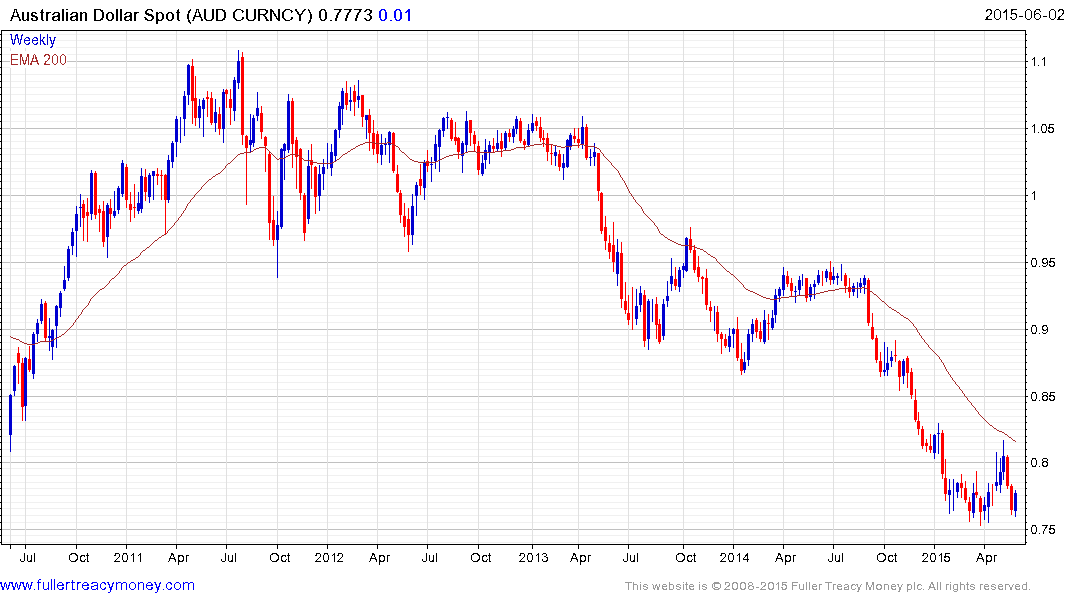 The Australian Dollar continues to hold the 75¢ area but a sustained move above 82¢ would be required to question medium-term supply dominance. 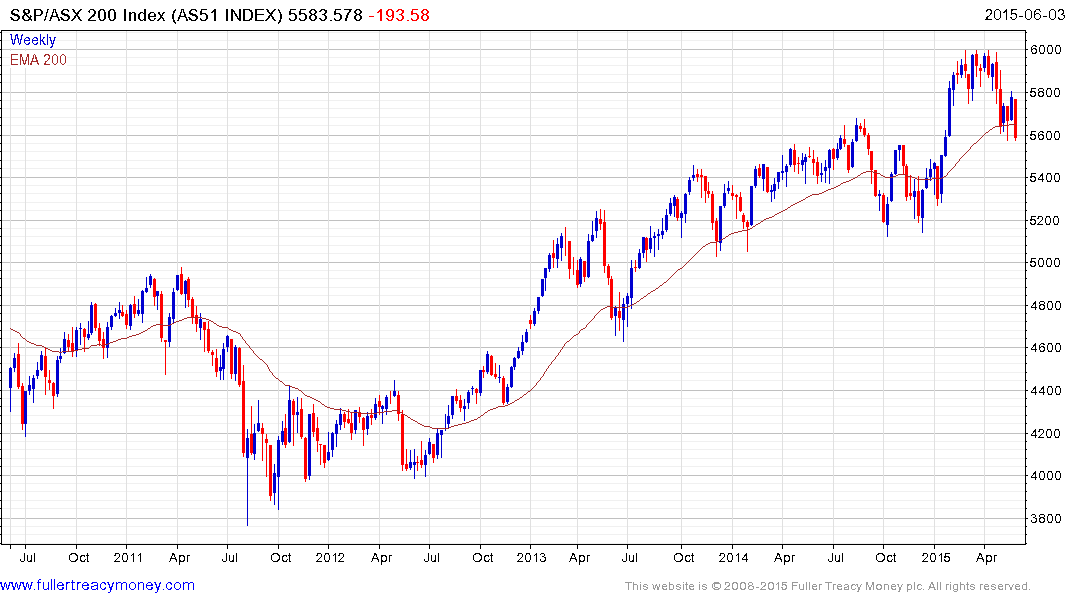 The S&P/ASX 200 has returned to test the region of the 200-day MA; having bounced from this area two weeks ago. This is not the first time the Index has traded below the 200-day MA since 2012 but it will have to find support within the next 150 points or so if medium-term scope for continued higher to lateral ranging is to be given the benefit of the doubt. 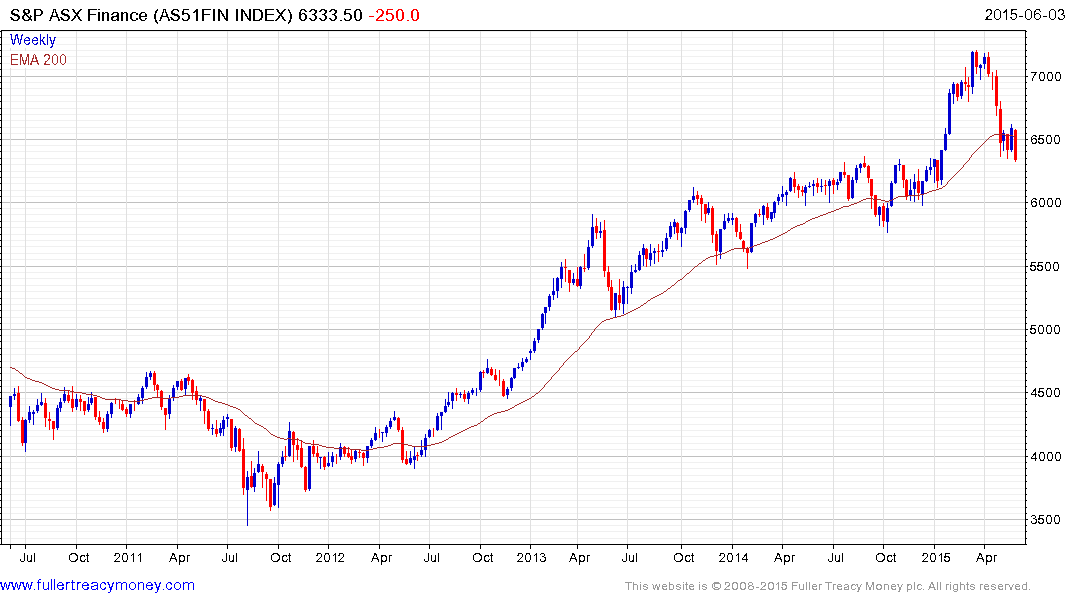 It is noteworthy that the S&P/ASX Finance Index, which has been among the best performing sectors, had accelerated to the March peak. It has now pulled back to test the three-year uptrend and will need to find support soon if medium-term demand dominance is to remain intact.