Uncertainty over how the dispute would be resolved in the one-month deadline set by Washington will reinvigorate a hunt for haven assets in a world already hampered by slowing growth.

An easy bet will be to short the expected losers: risk-sensitive currencies from Asia to South America, they say. “To be honest, I thought the dollar would be rising at a much faster pace than this -- markets were pricing in a Goldilocks environment and they were clearly wrong,” said Stephen Miller, an adviser at asset manager GSFM and a former head of fixed income at BlackRock Inc.’s Australian business.

“Right now I’d be long U.S. dollar versus EM currencies, the likes of Argentina and Turkey.” There’s a 60% chance that China and U.S. won’t reach a deal in the coming weeks, according to analysts at Australia and New Zealand Banking Group Ltd., after last week’s talks laid bare divisions including the removal of existing tariffs and a breakdown in trust. While both nations plan to continue negotiations, traders are waiting for Beijing’s retaliation measures after Washington slapped more duties.

The Chinese renminbi has long been used as policy tool and tariffs being imposed on a wider range of goods, there is a clear argument for having a weaker currency. The country is obviously going to experience some difficulties from tariffs imposed on exports to one its largest trading partners but the potential for domestic inflation to spike on the back of a weaker currency is likely to limit the scale of devaluation. 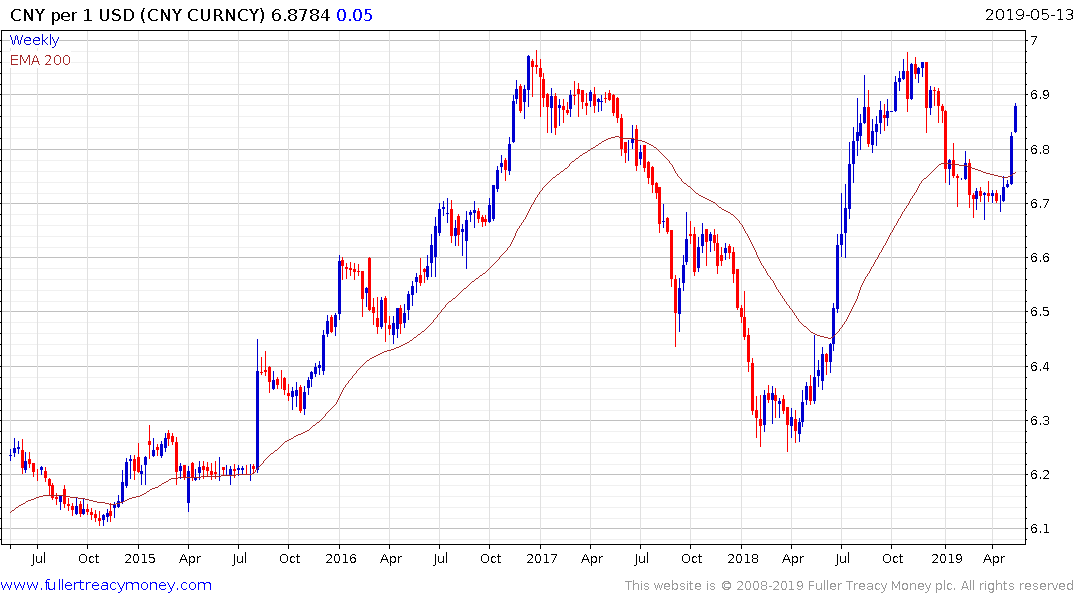 Meanwhile countries competing with China for export markets are losing no time keeping pace with the renminbi’s weakness. The South Korean Won has been weakening for a month and is now approaching a previous area of support near KRW1200. 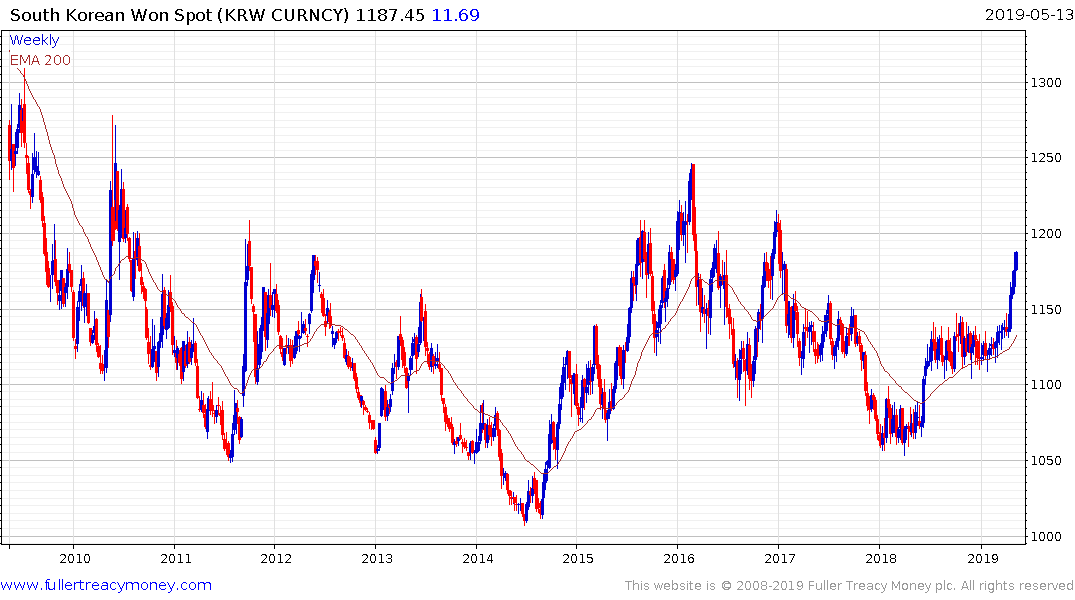 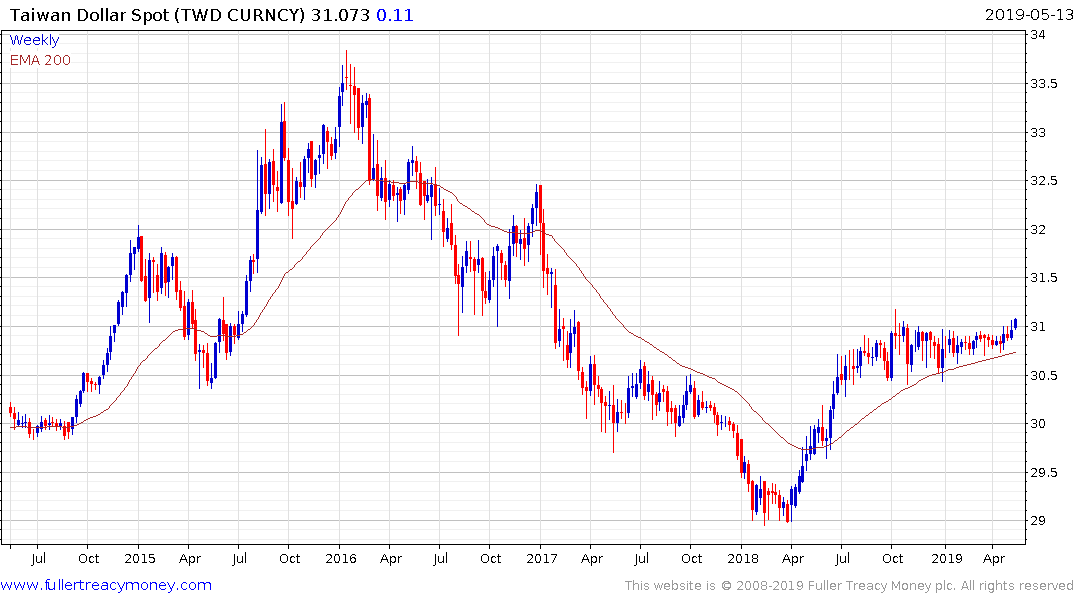 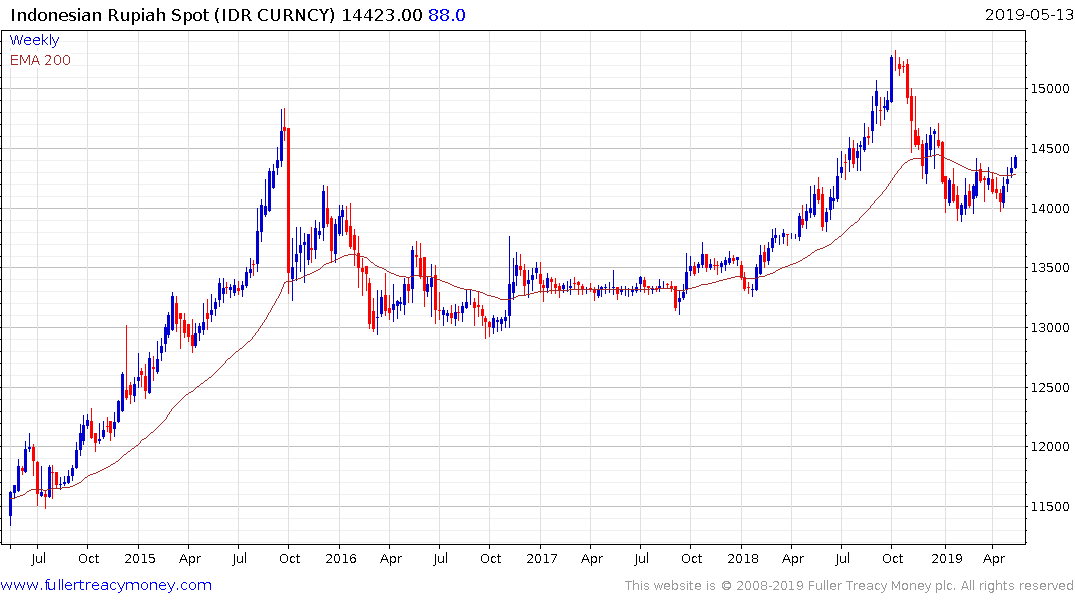 The US Dollar is testing the upper side of its range against the Taiwan Dollar and broke back above the trend mean against the Indonesian Rupiah. 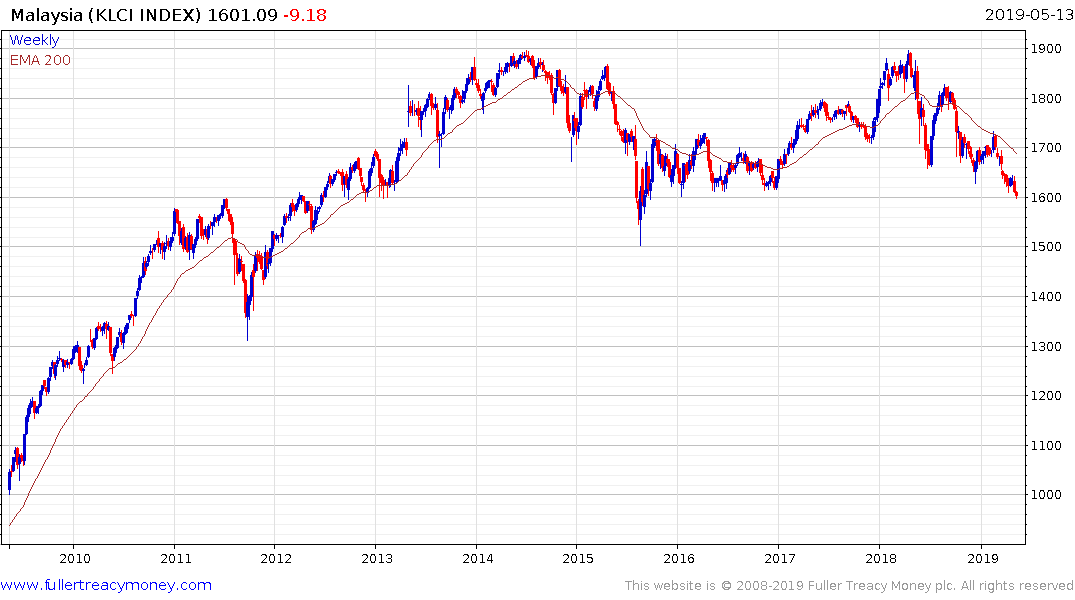 The Malaysian stock market is testing an important area of potential support near the lower side of its six-year range and needs a clear upward dynamic to check downward momentum. 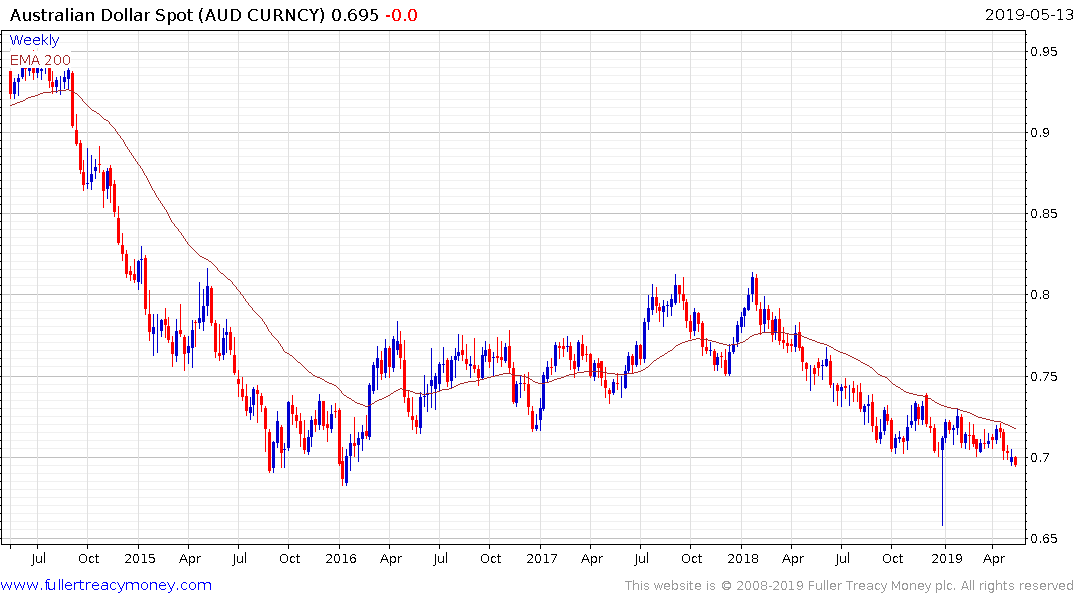 The Australian Dollar is trading below the psychological 70₵ level and a clear upward dynamic will be required check momentum. 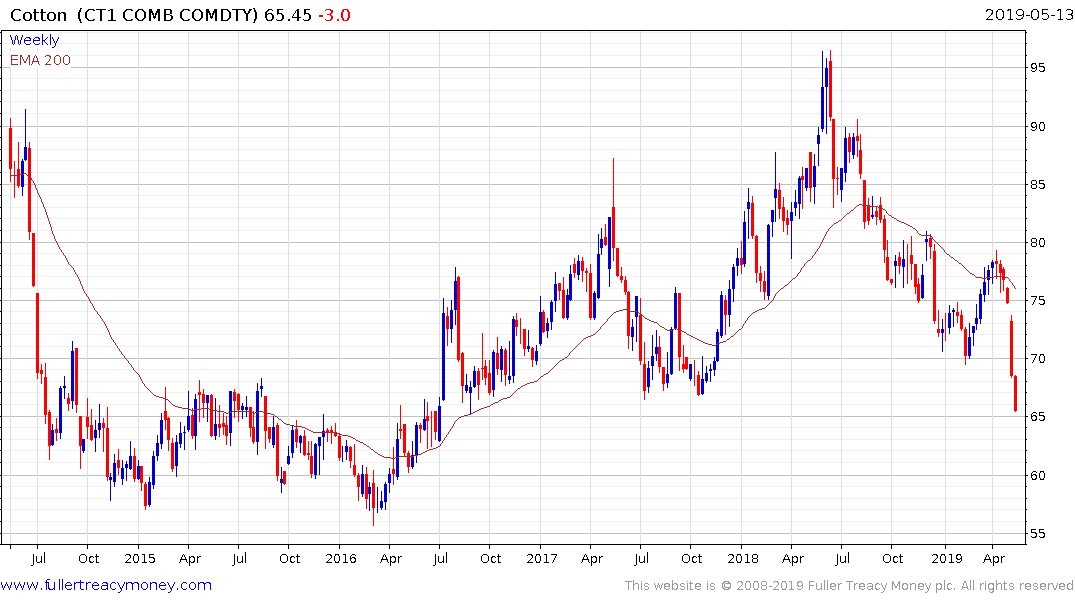 Cotton extended its downtrend with a limit down move today. It is looking increasingly short-term oversold but is also a major victim of rising tariffs. 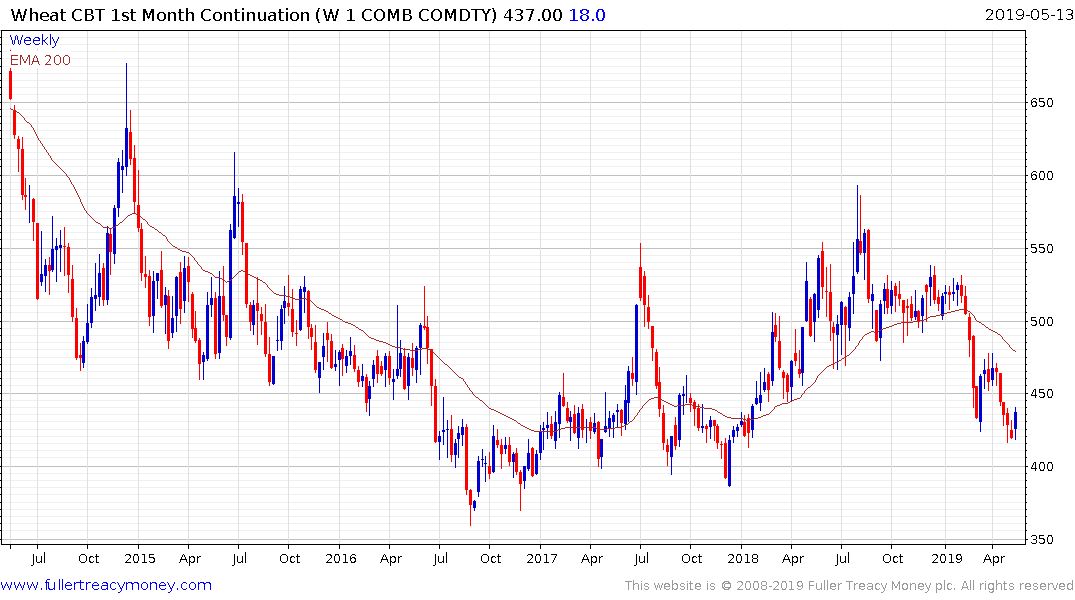 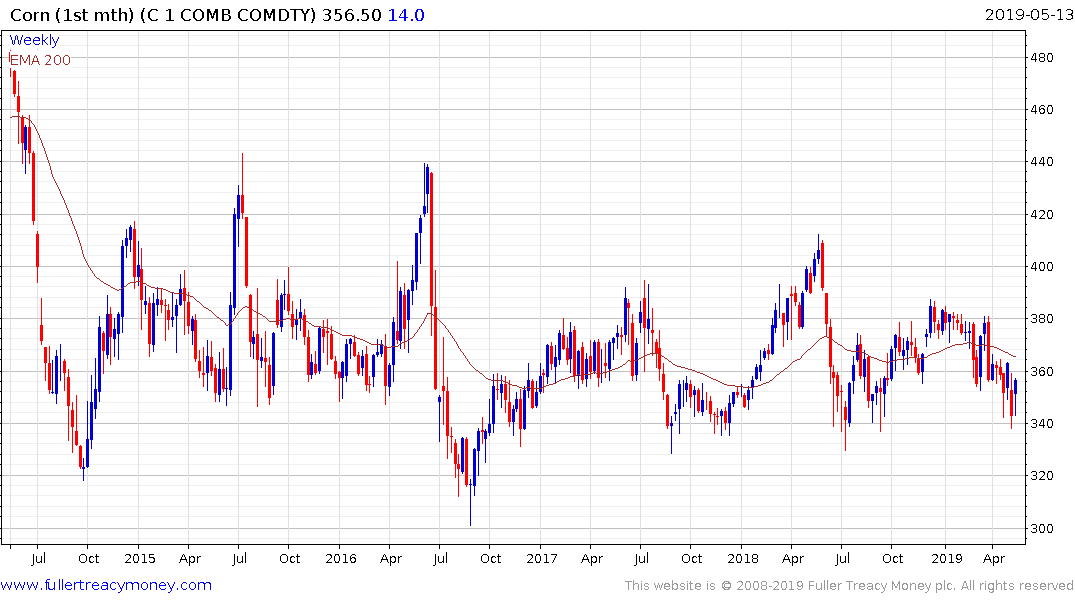 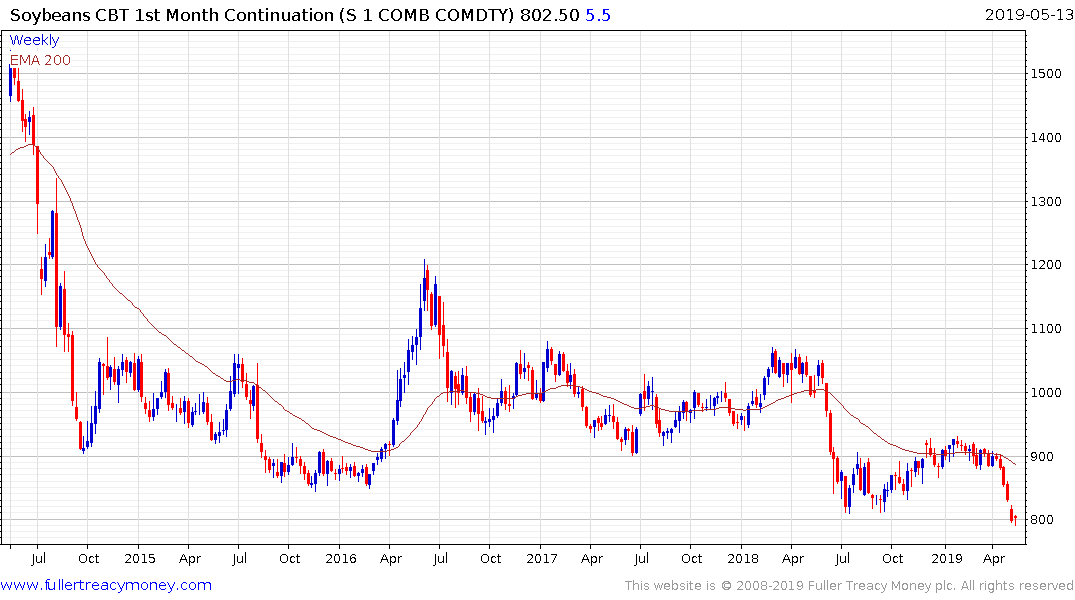 Wheat posted a upside key reversal from the region of the early May low today and the rebound was shared by both corn and soybeans. 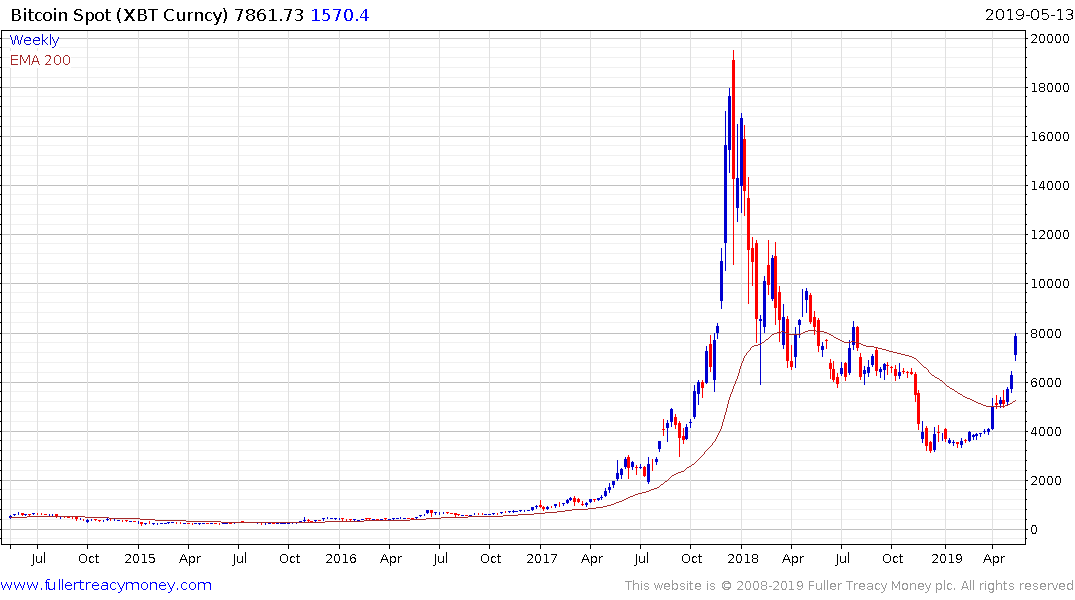 Meanwhile the impending halving of the reward for mining bitcoin, with demand for a safe haven, delivery of institutional custody solutions and potential for Chinese capital flight spurred a surge in the cryptocurrency. It jumping over the weekend to test the $8000 level today. While somewhat overbought in the short-term this continues to look like a recovery scenario.