Full Text of Mario Draghi speech
Comment of the Day

The decisions are based on our economic analysis, taking into account the latest macroeconomic projections by Eurosystem staff, and the signals coming from the monetary analysis.

Together, the measures will contribute to a return of inflation rates to levels closer to 2%. Inflation expectations for the euro area over the medium to long term continue to be firmly anchored in line with our aim of maintaining inflation rates below, but close to, 2%. Looking ahead, the Governing Council is strongly determined to safeguard this anchoring. Concerning our forward guidance, the key ECB interest rates will remain at present levels for an extended period of time in view of the current outlook for inflation. This expectation is further underpinned by our decisions today. Moreover, if required, we will act swiftly with further monetary policy easing. The Governing Council is unanimous in its commitment to using also unconventional instruments within its mandate should it become necessary to further address risks of too prolonged a period of low inflation.

The ECB’s policies have contributed to the deflationary forces which continue to pose a threat to their aim of anchoring inflationary expectations. Most particularly the Bank’s program of sterilising capital infusions to the financial sector, by withdrawing liquidity elsewhere, has been a headwind to the bloc’s domestic economic activity. By allowing its balance sheet to expand once more, the ECB is removing an obstacle to growth. 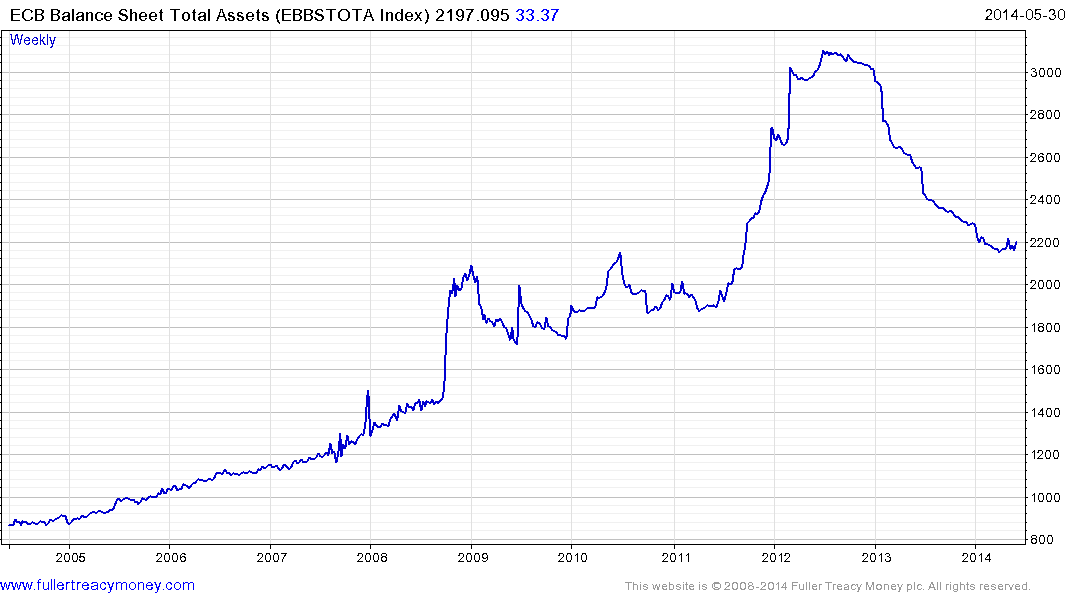 A range of possible measures were discussed by the ECB in the public forum ahead of today’s meeting. However the fact they have adopted just about all of them runs the risk of communicating a mixed message. Yes, the market will welcome additional liquidity infusions but will also question just why the ECB felt the need for such a spread of measures. Perhaps the Eurozone economy is weaker than many had originally anticipated? The last thing the central bank wants to do is to exude a sense of desperation. This possibly explains the volatility in asset markets in the aftermath of the speech. 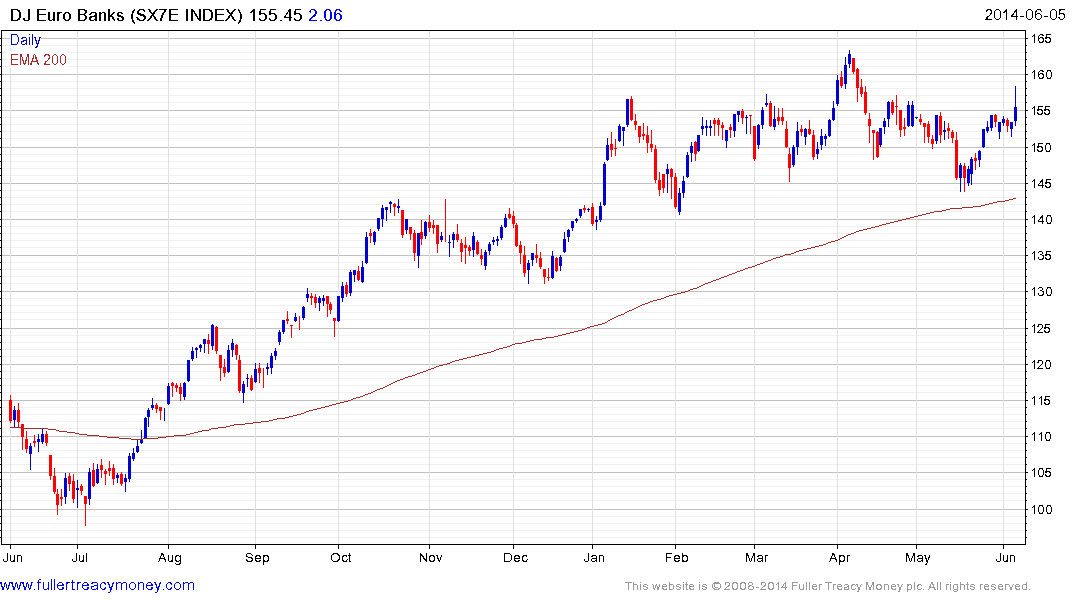 The EuroStoxx Banks Index has been largely rangebound since December and was unable to hold today’s earlier advance. A sustained move above 160 will be required to confirm a return to medium-term demand dominance. Broadly speaking a negative deposit rate at the ECB for banks’ excess deposits is not particularly positive since it will act as a tax.

The ECB has for some time accepted ABS as collateral (€306 billion in total at the end of March) but the fact remains that Eurozone banks have large quantities of troubled mortgages, auto loans, credit card debt etc. on their books that would find willing buyers in the securitised market. This is a contentious policy but one which Mario Draghi was keen to pursue and which should be a net positive for the banking sector over the medium term. 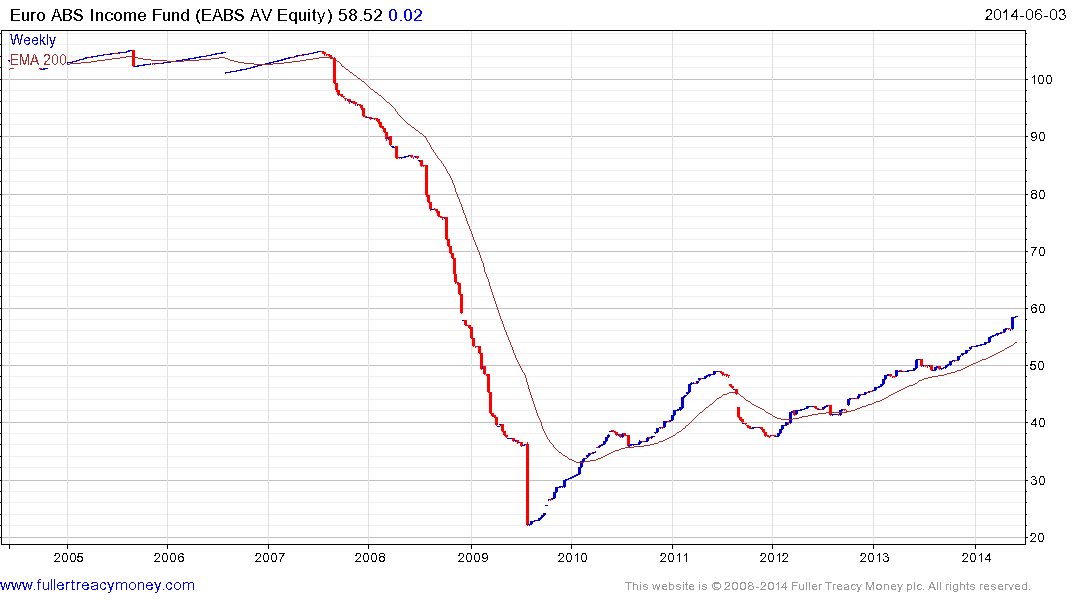 The Austrian listed Euro ABS Income Fund has both front end and back end loads of 5%, a management fee of 0.25% and an expense ratio of 0.34%. The fund has €54 million under management and has been trending steadily higher over the last two years. A sustained move below the 200-day MA would be required to question medium-term scope for additional upside. If subscribers know of additional ABS funds focusing on the Eurozone, particularly those with similar performance but lower fees, I would be happy to add them to the Chart Library. 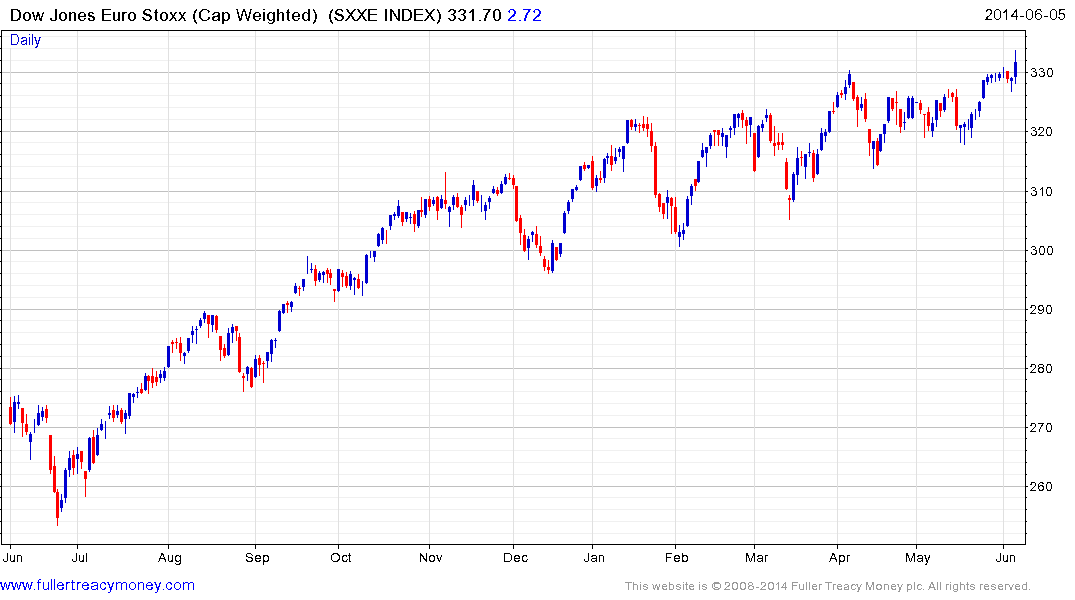 The Euro Stoxx Index continues to hold a progression of higher reaction lows and broke out to a new recovery high today.  Over the course of the choppy uptrend which has been evident for the last six months, breakouts have not been sustained. While somewhat overbought in the short-term, a sustained move below the 200-day MA would be required to question medium-term potential for continued higher to lateral ranging. 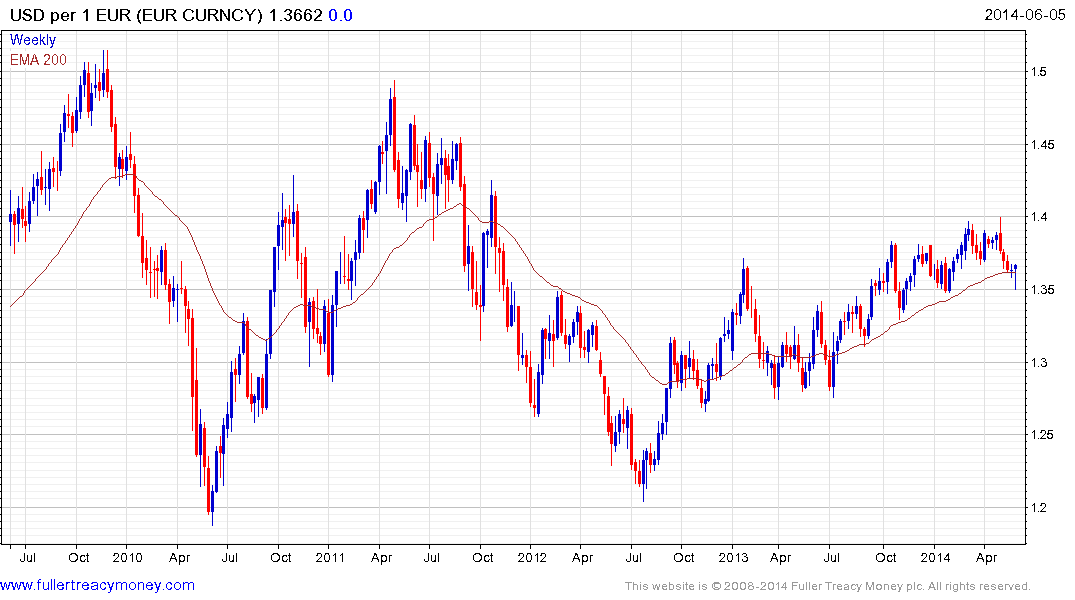 In much the same way that the Fed’s extraordinary monetary measures stimulated asset prices but weighed on the Dollar, the ECB has many of the same objectives. The Euro had priced in much of today’s news and had returned to test the region of the 200-day MA. It was volatile today before finishing in positive territory to form an upside key day reversal. Considering that the ECB has signalled that the $1.40 area is an area they see as too strong, the most likely scenario is for ranging. Meanwhile, currency is likely to unwind its short-term oversold condition. 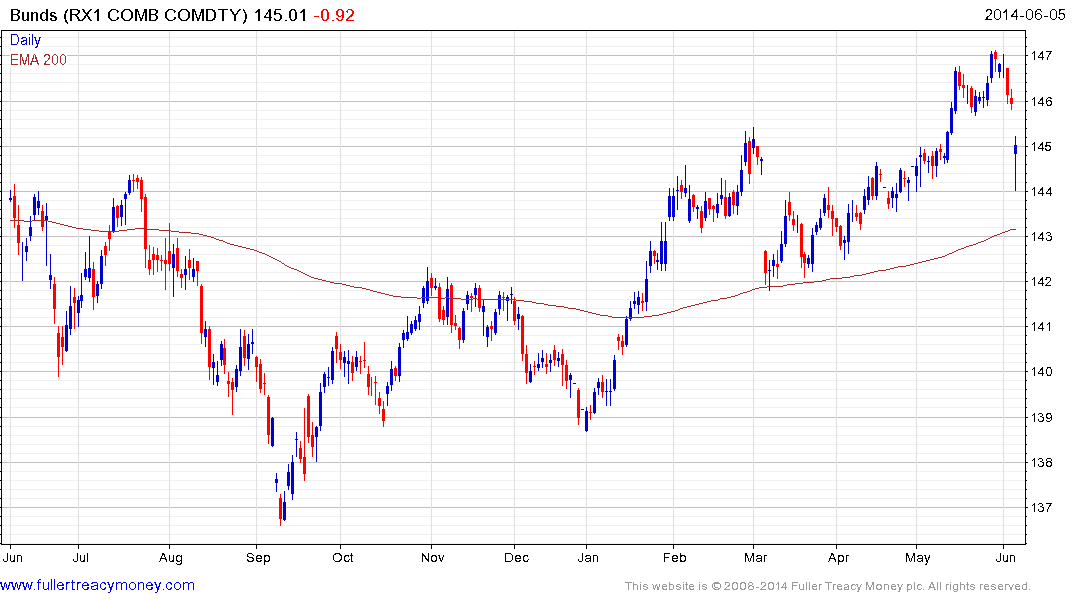 German Eurobund futures found support today in the region of the 200-day MA and a sustained move below 143.25 would be required to question potential for some additional upside. 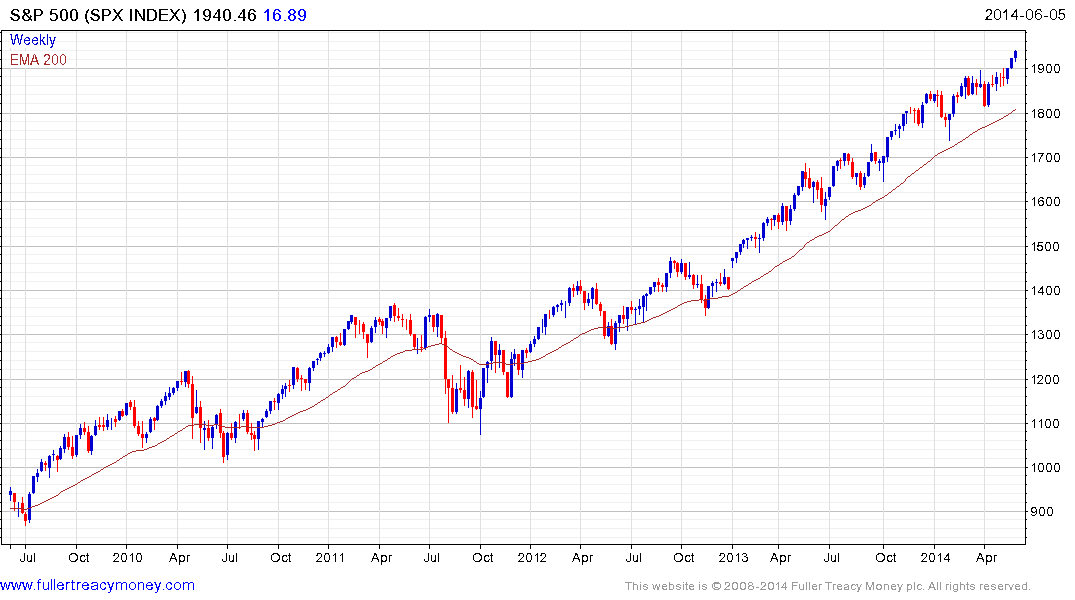 In a global economy capital is mobile. While there might still be questions about the deflationary pressures in Europe, the USA’s economy is rebounding from the cold winter. At least some of the money printed in Europe will find its way to the USA via carry trades. The Nasdaq-100 hit a new recovery high today while the S&P500 continues to extend its breakout. 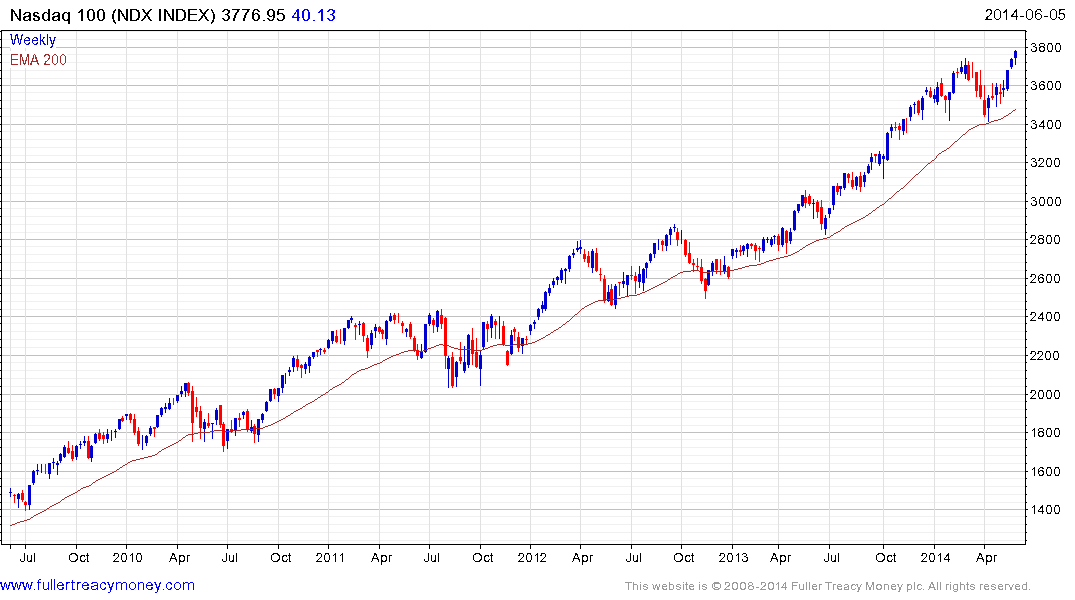