“Right now, on the precious metals side, we’re entering a bull market even for the junior companies,” Harquail said. “People are doing financings and they’re upsizing the financings.”

Franco-Nevada’s investors want the company to focus on precious-metal deals, he said, as gold continues its ascent. The pandemic has created some headwinds, mainly around doing on-site due diligence for new investments. But Franco-Nevada has been able to work around that with “installment deals” that are subject to doing that work once it’s safe.

The company’s biggest investment, in First Quantum Minerals Ltd.’s Cobre Panama mine, was shut for most of the second quarter but is now reopening.

Harquail said the possibility of supply interruptions in Chile or Peru is serious but that so far governments have treated mining as an essential industry. The company has a stake in Lundin Mining Corp.’s Candelaria mine in Chile.

So far, miners have been able to take advantage of their ability to control sites to contain the virus, he said. While Franco-Nevada doesn’t expect full production this year, he’s comfortable if assets are performing at 85% to 90% of optimal volume.

”I think the industry is going to be able to manage this quite well,” he said.

In the early stages of a commodity bull market investors are focused on dividends. They want the security of the payout to offer some form of compensation for the perception of risk. As prices improve, priorities change. A desire to buy at a discounted price to try and gain leverage to the rising price environment supersedes the desire for yield. By the time the bull market climaxes investors are willing to pay anything to capture supply for fear of missing out on future returns.

Royalty Streamers tend to pay dividends and also offer exposure to leverage because of the discounts locked in when streaming agreements are purchased. That generally means these kinds of companies are strong performers in a bull market environment. 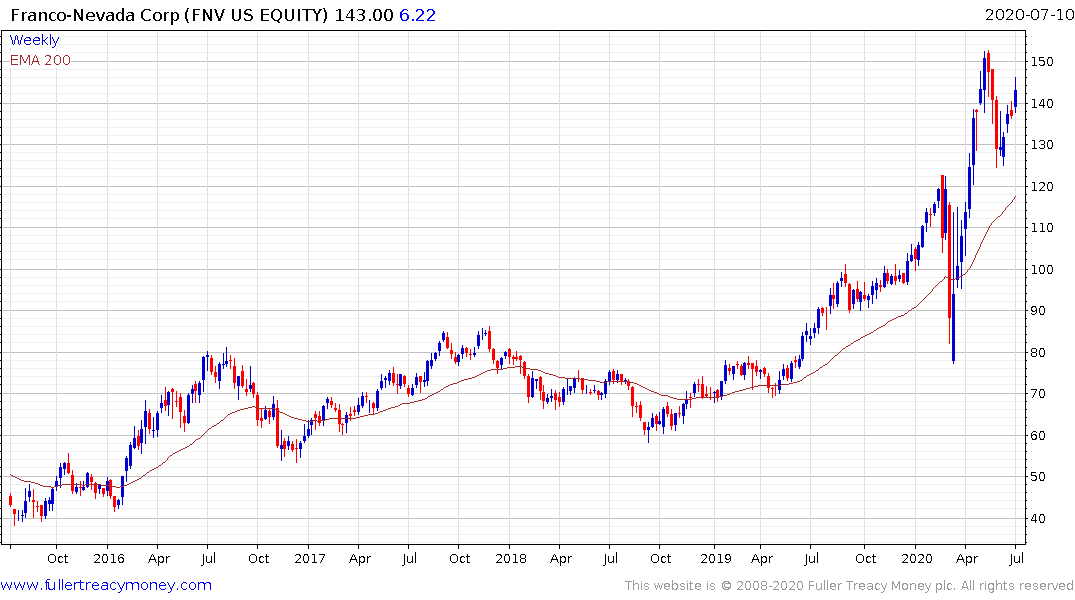 Franco Nevada concentrates on precious metals but does have oil and industrial metal assets. The share rebounded aggressively from the March low and has been consolidating below $150 for the last six weeks. 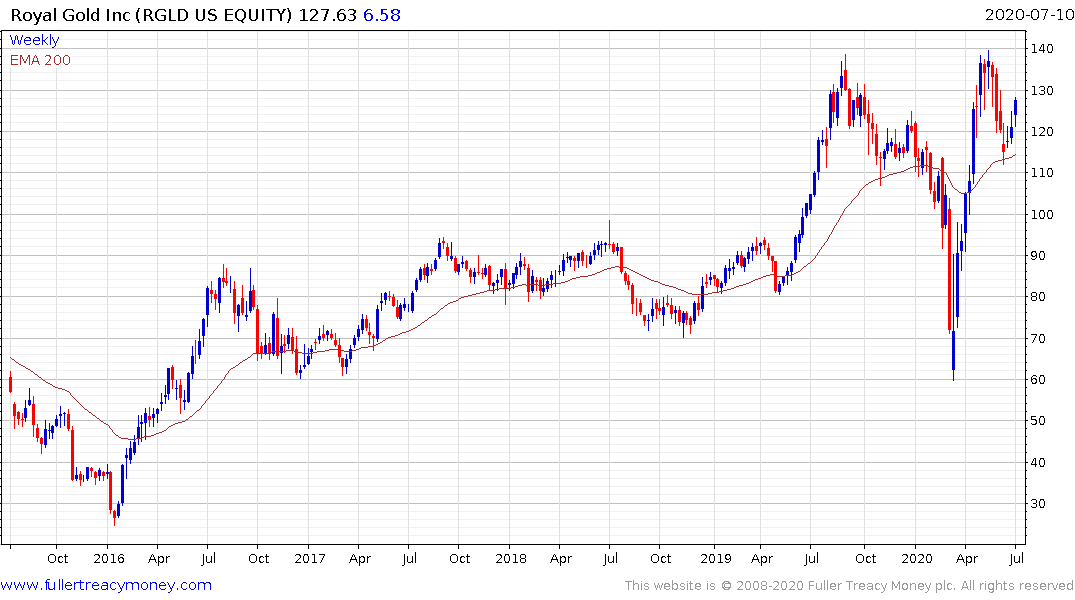 Royal Gold also rebounded emphatically and found support three weeks ago in the region of the trend mean. 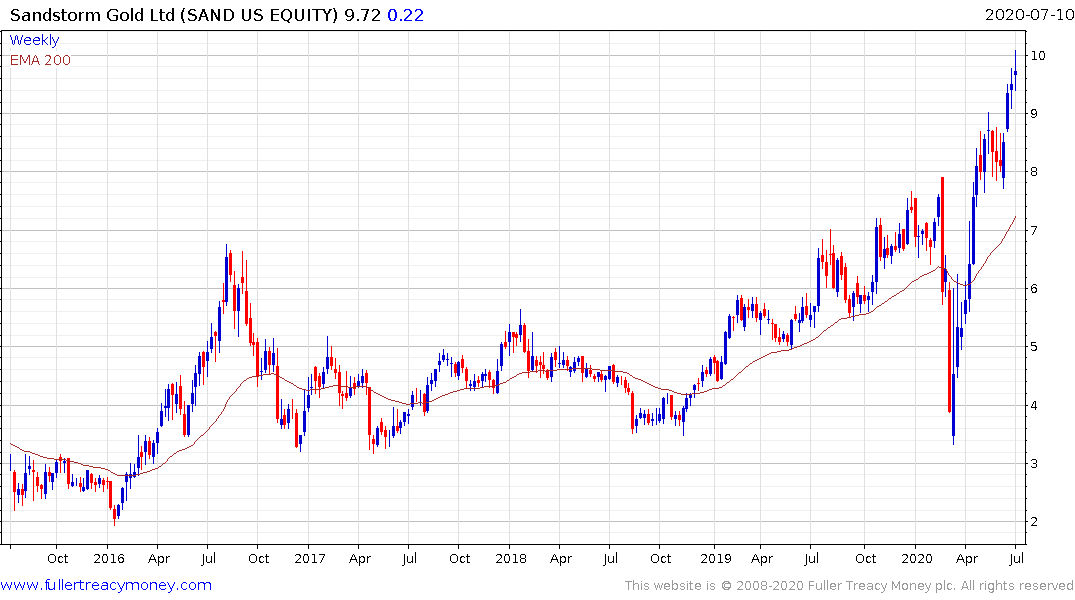 Sandstorm Gold has a similar chart pattern to the GDX ETF but paused today in the region of the psychological $10. 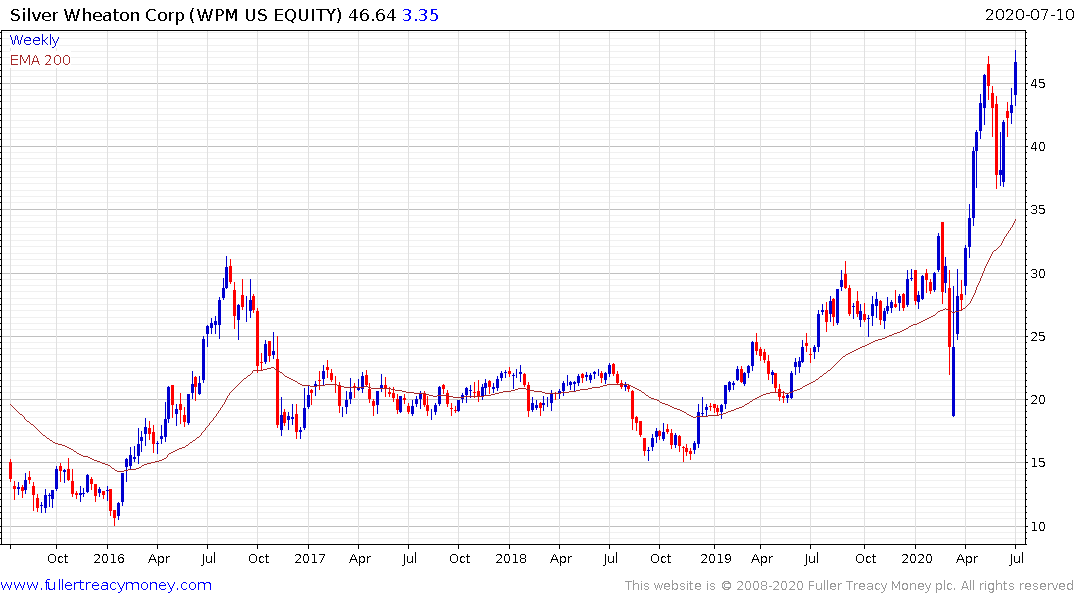 Wheaton Precious Metals is back in the region of its all-time peak and a sustained move below the trend mean would be required to question medium-term upside potential.