The Perth-based producer declared a total annual dividend of 45 Australian cents a share, compared with 15 cents a year earlier, topping the average 39 cent forecast among 19 analysts surveyed by Bloomberg. Fortescue expects to pay between 50 percent to 80 percent of net profit after tax in dividends in the current fiscal year, the company said Monday when reporting full-year earnings.

Rio Tinto Group aims to pay a $2 billion interim dividend and increased its share buyback by $1 billion this year on stronger materials prices, while Anglo American Plc last month announced plans to resume dividend payments about six months ahead of schedule. BHP Billiton Ltd. is forecast to raise its full-year payout almost to 88 cents a share when it reports earnings Tuesday, according to the average of 15 analysts’ forecasts.

“They are making hay while the sun shines, and it’s been a while coming,” said James Wilson, a Perth-based analyst at Argonaut Securities Ltd. “Hard times have driven a lot of innovation, and the miners are now very lean and extremely efficient -- when prices come back, they pop in a big way, and make a lot of money.”

Iron ore, the top earning material for Fortescue, BHP and Rio, has rebounded since mid-June on strong steel demand in China and weaker-than-expected gains in low-cost supply.

Iron-ore prices posted a truly impressive rally in 2016 and an equally stunning setback at the beginning of this year which challenged the recovery hypothesis. The price found support in region of the upper side of the underlying base formation, near $60 in June and continues to rebound. 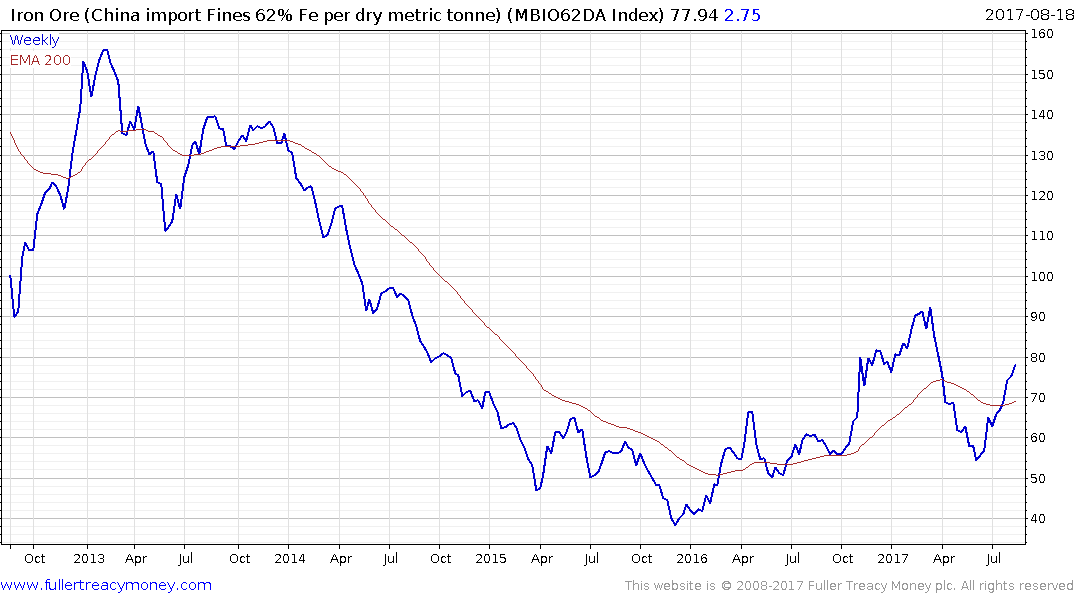 From a medium-term perspective, the most important thing the price has done since the 2011 peak was to rally last year to break the medium-term downtrend. The question now is whether the current rebound represents a reassert of medium-term demand dominance of confirmation that a first step above the base is forming which would suggest the peak near $95 represents an important psychological level. 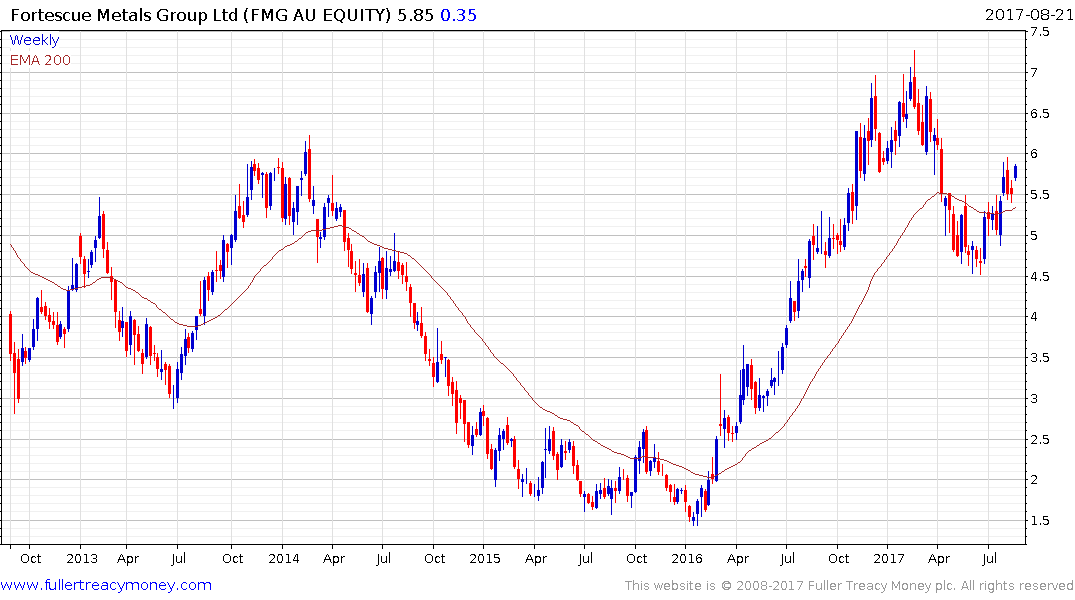 Fortescue (Est P/E 11.39, DY 10.99%) pulled back less that the iron-ore price and has also rebounded over the last couple of months. 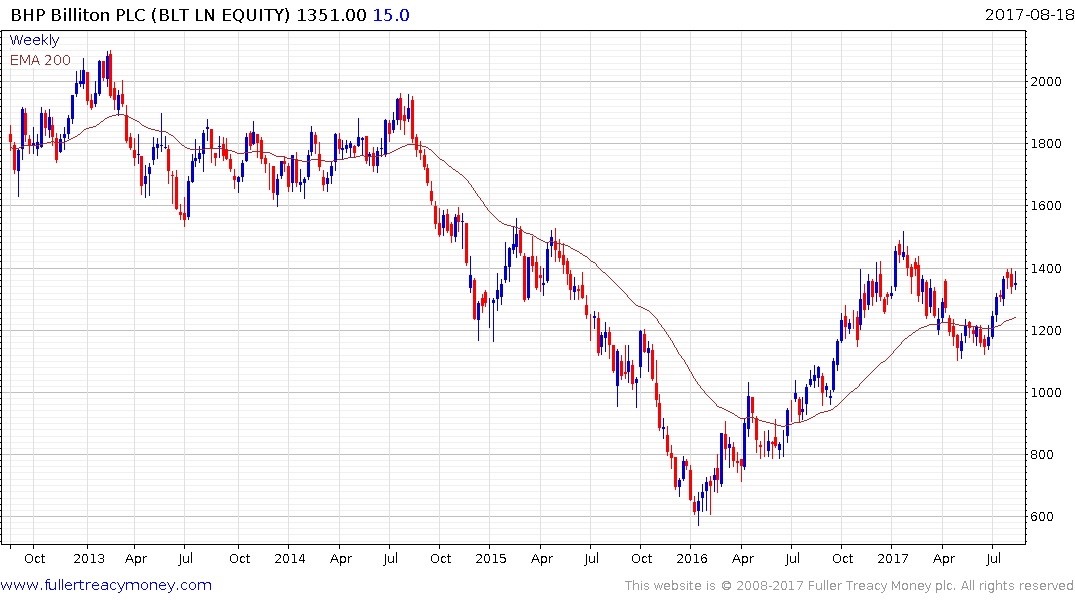 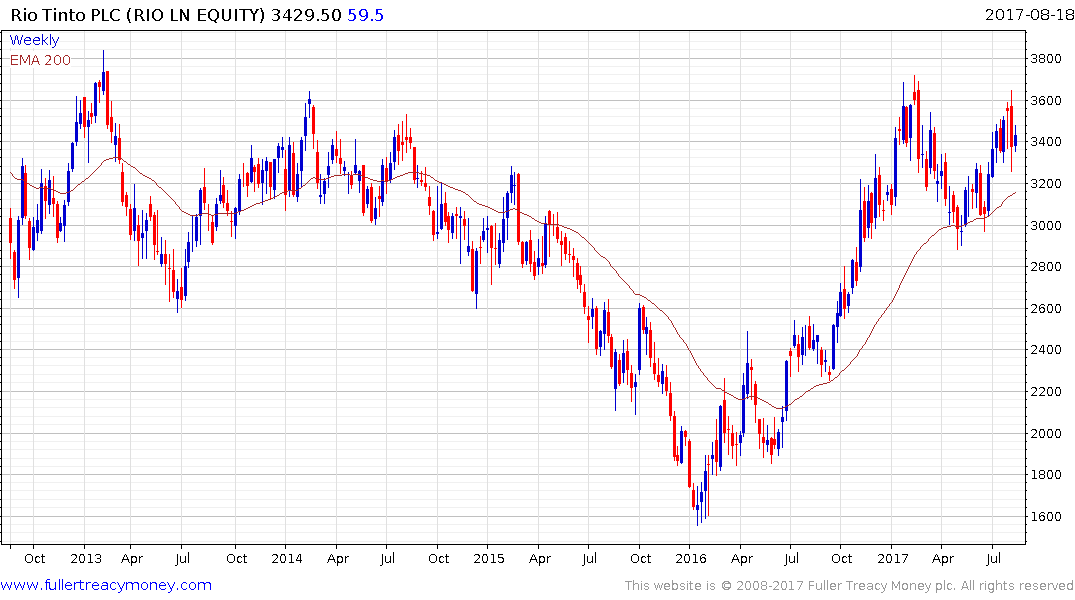 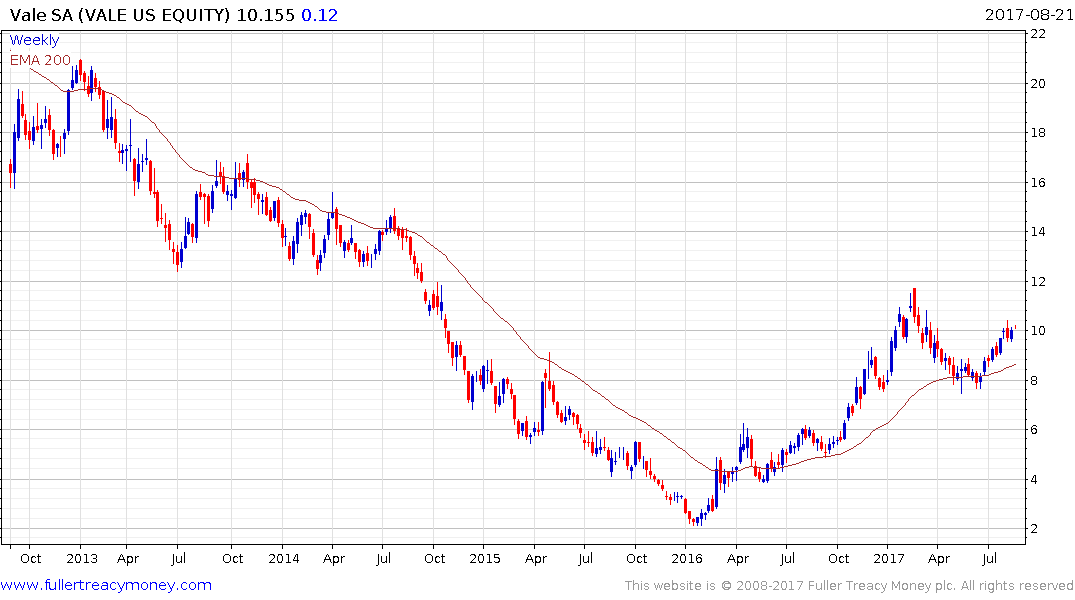 An important consideration for Australian investors who have been heavily overweight the financial sector is that the miners are increasing dividends while the banks are cutting theirs. In absolute terms, the banks still have high dividend yields but if the current trajectory persists it is possible that situation will reverse so monitoring the recovery of the mining sector is important.