“The likelihood that the current El Niño peaks soon and turns into a potentially strong La Niña by late 2016 or early 2017 is something that participants in agricultural markets should track closely,” Mr. Norland said.

“El Niño gets all the buzz, but La Niña does not get enough credit,” said David Ubilava, a lecturer at the University of Sydney’s School of Economics, who has written on the correlation between climate anomalies and commodity prices. For example, Canada and the U.S. are more likely to get more droughts in La Niña years than during an El Niño year, which can tighten food supplies and push up prices, Mr. Ubilava said.

With floods across much of the Mid West USA and Europe snowless talk of climate change and its effects on weather is widespread. Crops don’t care if the extremity of the current El Nino is influenced by climate change but we do know that volatile weather makes for volatile pricing. 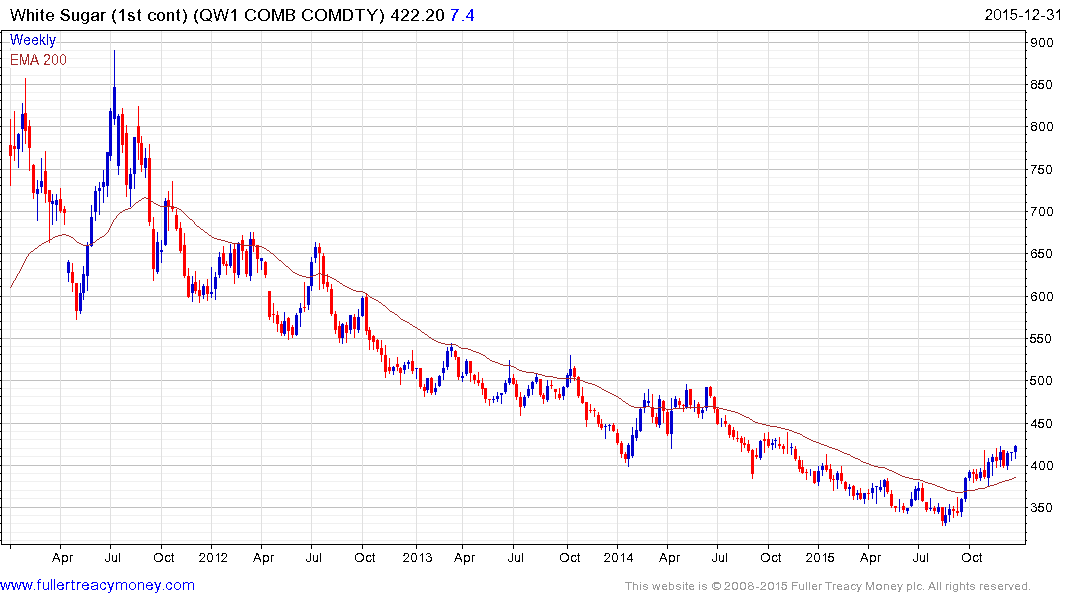 White Sugar continues to firm having found support in the region of the 200-day MA for the first time in more than four years. 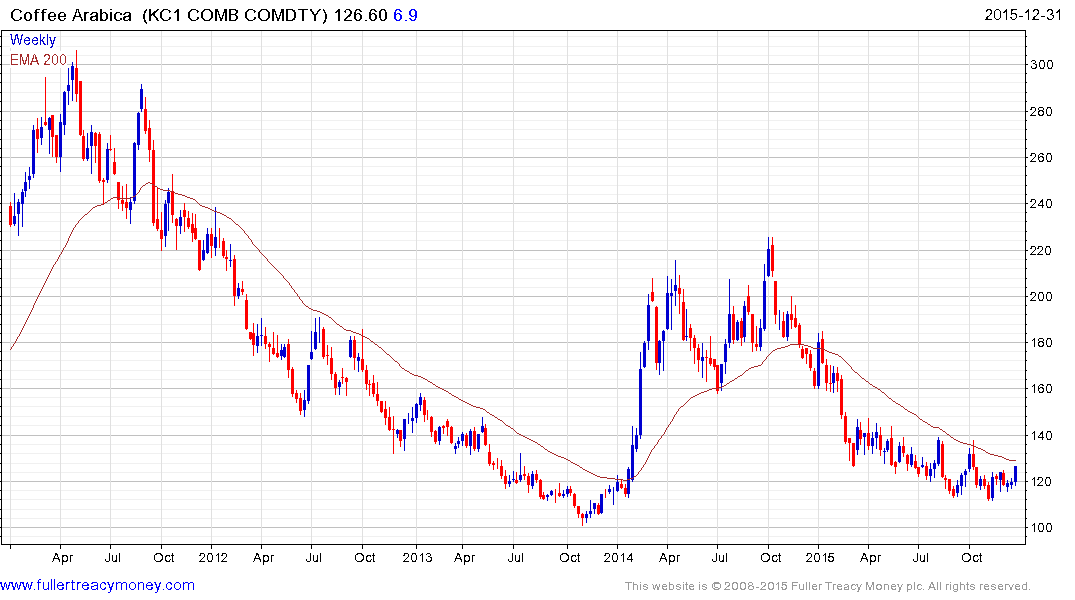 Arabica coffee has been ranging with Type-2 bottoming characteristics for most of the year but will need to sustain a move above the 200-day MA to confirm a return to demand dominance beyond the short term. 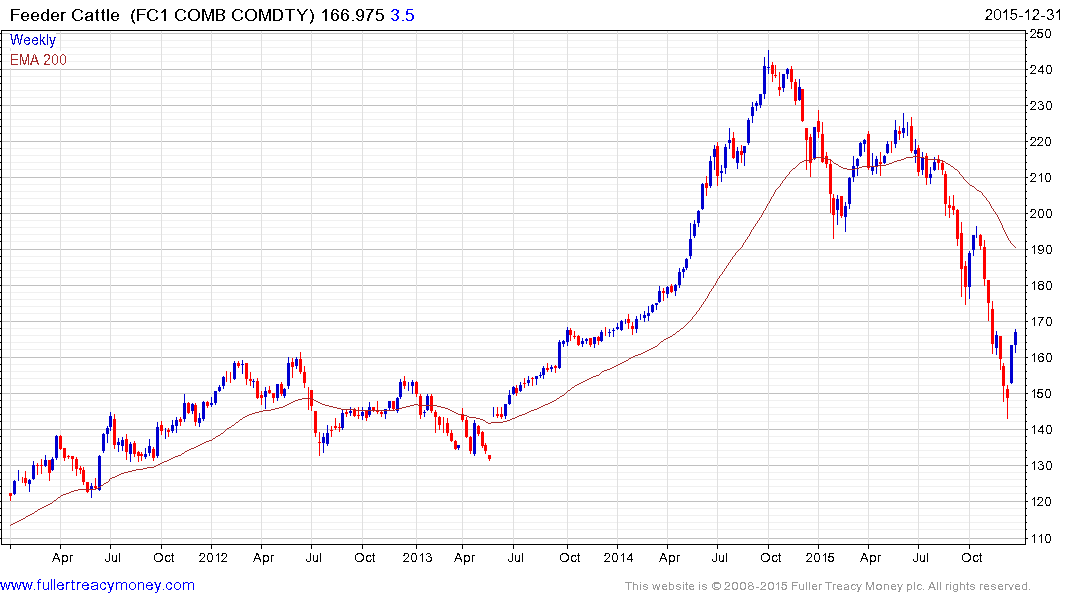 Feeder Cattle hit a medium-term peak more than a year ago and experienced a steep decline before finding at least near-term support from mid-December. A reversionary rally is underway and prices will need to find support above the $140 low on the first major pull back to demonstrate demand returning to dominance at a progressively higher level. 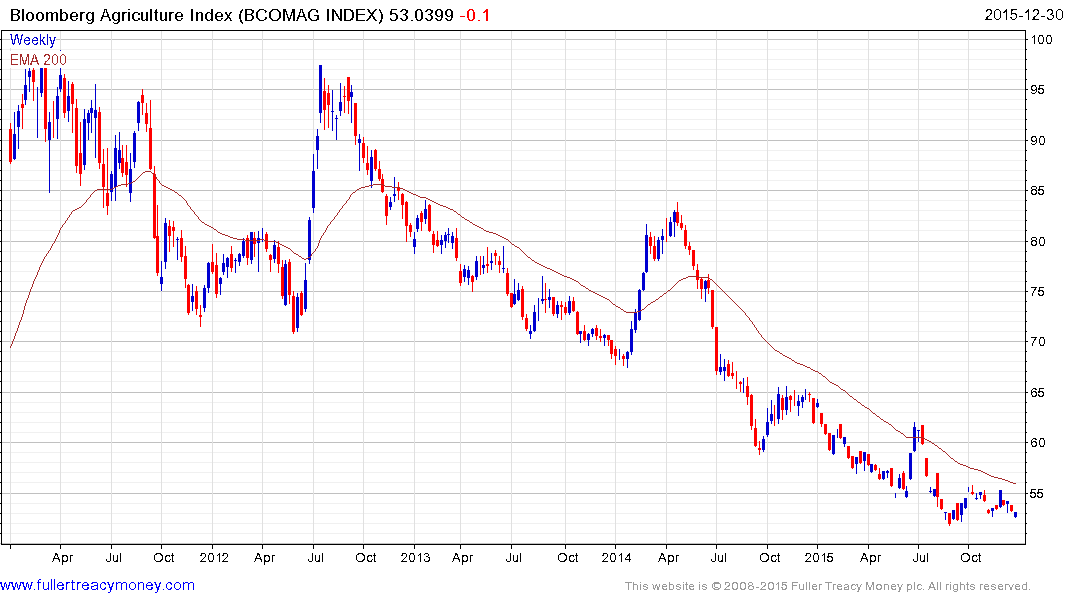 These represent the highlights for the agriculture sector which has had a moribund year generally.
The Bloomberg Agriculture Index has at least paused over the last few months but needs to sustain a move above the MA to begin to signal demand is back in the driver’s seat.

A number of processed foods companies have been ranging for much of the last year but with the economic outlook picking up and low commodity prices they are now turning to outperformance. 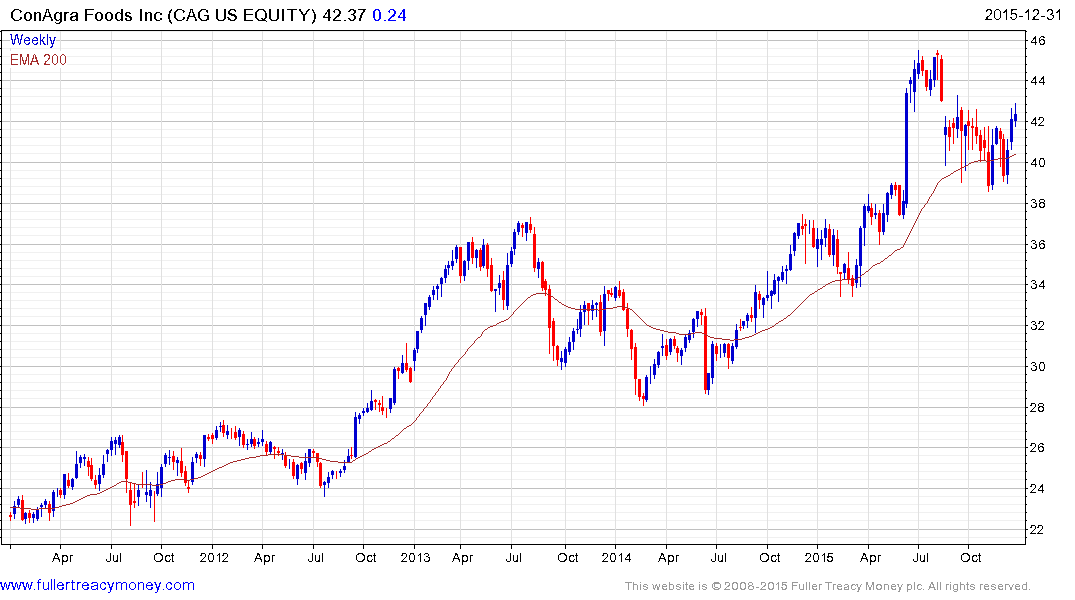 Conagra Foods found support two weeks ago in the region of the 200-day MA and a sustained move below $40 would be required to question medium-term scope for continued upside. 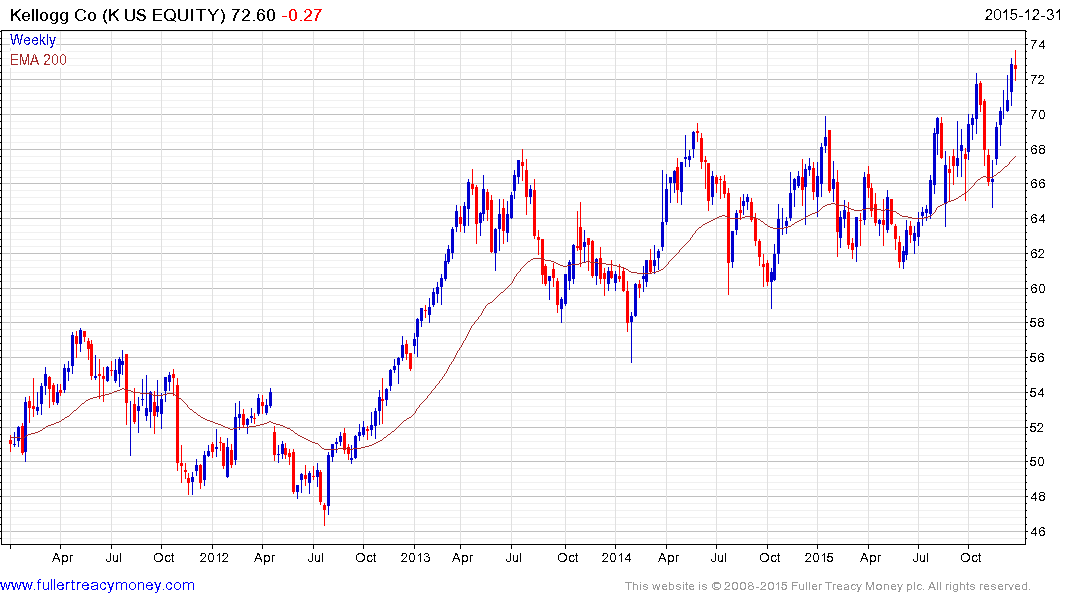 Kellogg ranged with a mild upward bias for much of 2015 but broke successfully above $70 last week and a sustained move below the MA would be required to question medium-term upside potential. 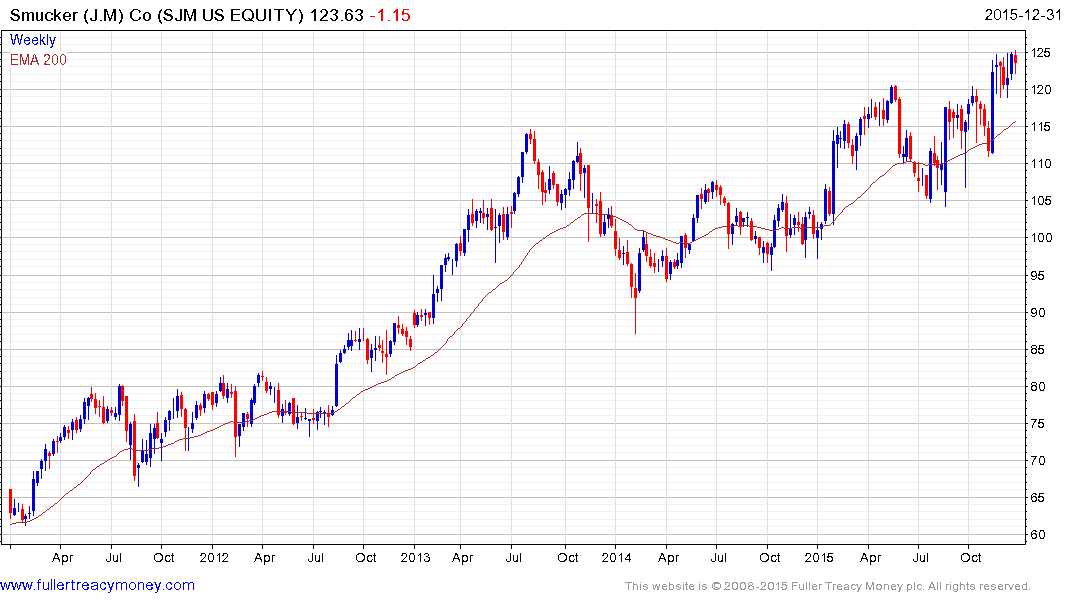 J.M.Smucker and General Mills have similar patterns and recently turned to outperformance. 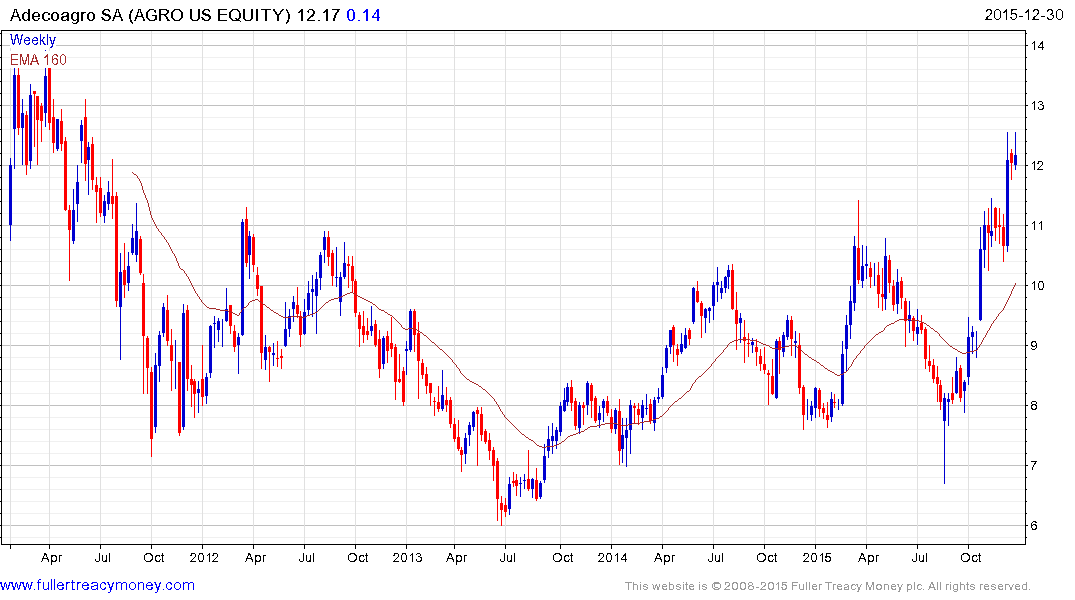 Adecoagro, which George Soros, has a stake in has substantial Brazilian operations and may also be benefitting from the improving political situation in Argentina. The share rallied impressively from the lower side of its four-year range from October to break out to new recovery highs and a sustained move below $10.50 would be required to question potential for additional upside. 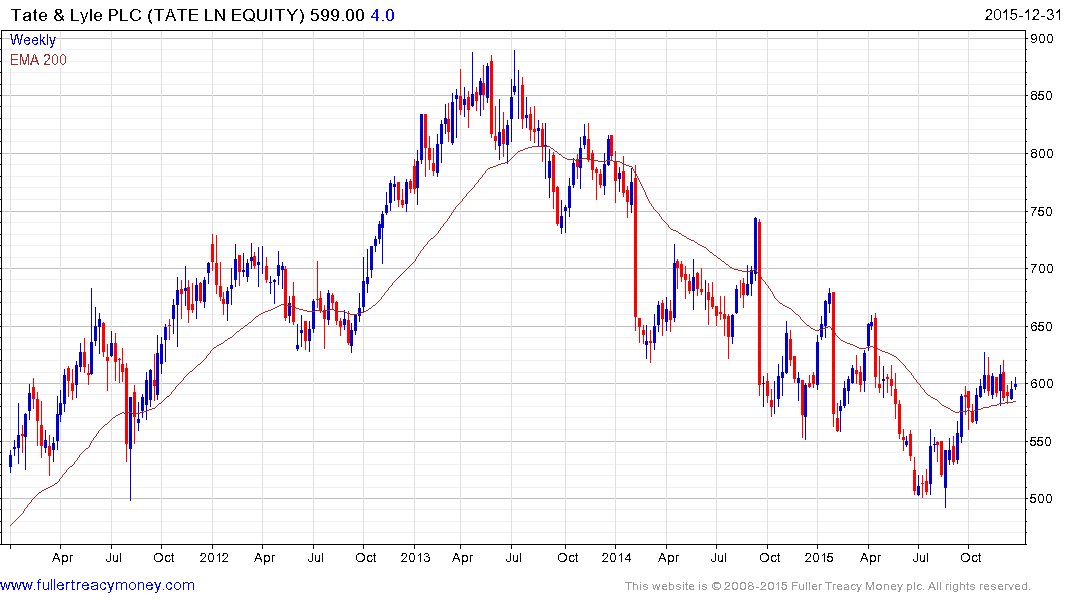 UK listed Tate & Lyle has failed to sustain rallies above the 200-day MA since 2013 but has been ranging above the trend mean since November and a sustained move above 640p would confirm a return to medium-term demand dominance. 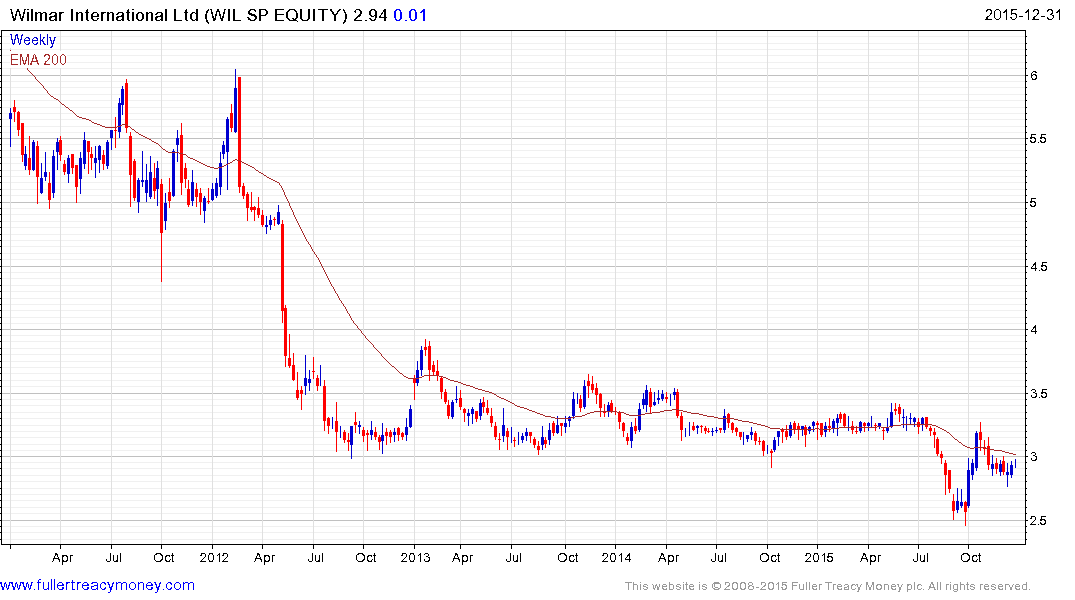 Singapore listed Wilmar may be in the process of forming a failed downside break below S$3. The recent strength of palm oil futures prices may have a positive influence on Wilmar’s price in 2016.