Foreign Exchange Outlook for First Quarter 2020
Comment of the Day

We still hold on to our stronger dollar call against the major currencies in Q1 2020 due to growth differentials. Despite some green shoots in Europe, the US is doing better than the rest of the world and we expect this to continue in early 2020. Reduced odds of a hard Brexit and the “Phase One” trade deal remove tail risk for the entire world economy, not just for the signatories. As a result, many major central banks are sounding more upbeat (ECB, RBA, RBNZ) and this is feeding into the notion that the global easing cycle has reached an end. Perhaps that is true, but that still leaves the US with an advantage in yield and relative growth rates. We note that December Markit PMI readings across the globe have so far come in weaker than expected, while the US remains firmly in expansionary territory. Surprise fiscal stimulus out of Europe is a risk in our view, but even if it happens, it’s unlikely to come in Q1.

Currencies are always a relative value argument so it is not so much about whether one currency is strong or weak but rather which is more attractive compared to the rest. There is no single fundamental that governs the foreign exchange market which leaves a great deal of room for argument about how persistent trends are likely to be. However, I think there have been three clear points in favour of the US Dollar over the last couple of years which are now worth re-examining.

After the Presidential election in 2016 and the tax cuts which ensued, the new Federal Reserve chairman tried to run countercyclical policy by withdrawing liquidity as the deficit expanded. That reduced the supply of Dollars which boosted its value. The illiquidity in the repo market which became a factor in September sent a clear message that the combined forces of tighter regulation, reduced liquidity and the Federal government’s demand for funds were creating a dangerous environment in the global money markets. Since then the supply of Dollars, through balance sheet expansion, has surged by more than $400 billion. This is about a clear a change to the underlying supply/demand environment as we could wish for.

Greater volatility on the stock market in 2018 taught the Fed that its policy of raising rates “on remote control” was likely to cause a recession. In 2019 they cut three times to take the rate back to where it stood at the end of March 2018 and there is very little potential for any further hikes in the near term. Those measures reduce the interest rate differential the US Dollar enjoyed against other currencies.

The Dollar is a major safe haven asset in its own right. The uncertainty investors felt in 2019 regarding the trade war, Hong Kong protests and the potential for a disorderly Brexit all resulted in demand for stability which supported the Dollar. With at least partials resolutions to many of these worries coming good in the last quarter there is less need for a safe haven. Meanwhile the efforts underway to avoid a recession, where governments all over the world are running increasingly large deficits is throwing focus onto debt sustainability and the value of fiat currencies generally. 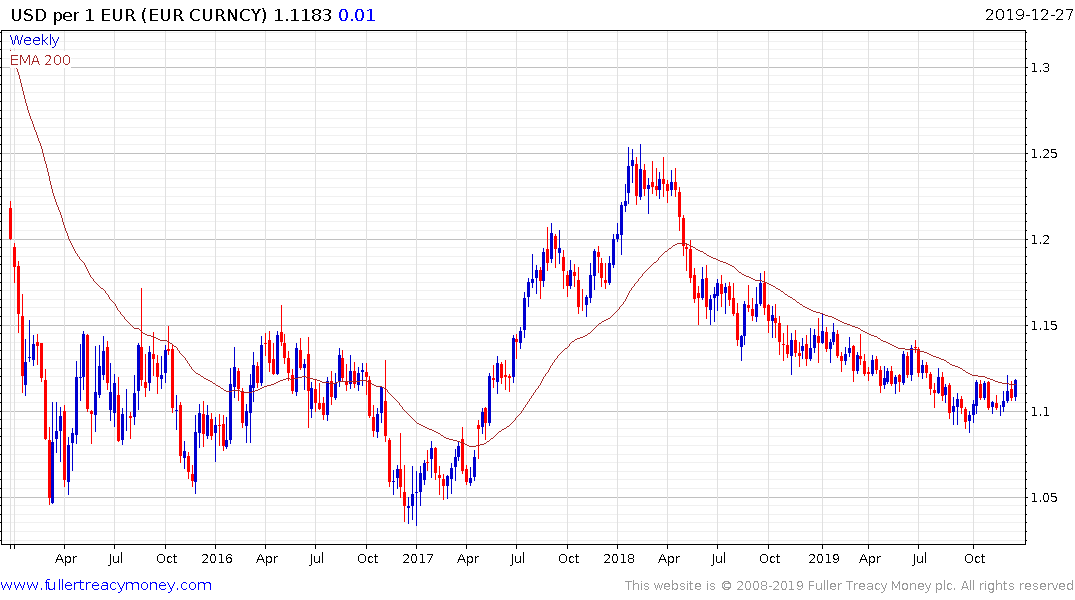 The Euro popped back above the trend mean against the Dollar today and is testing the psychological $1.12 level. It is looking increasingly likely the Dollar’s two-year uptrend is over. 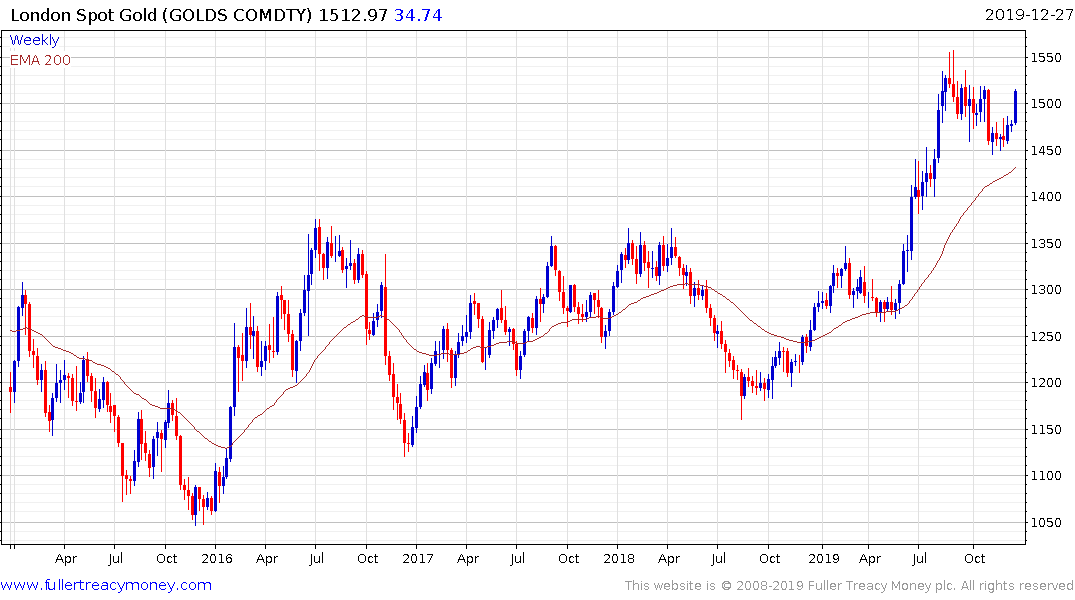 Gold is in the process of breaking a four-month downtrend and continues to exhibit first step above the base characteristics. This trading action is supportive of the medium-term bullish argument which could see precious metals be among the best performing assets in 2020. 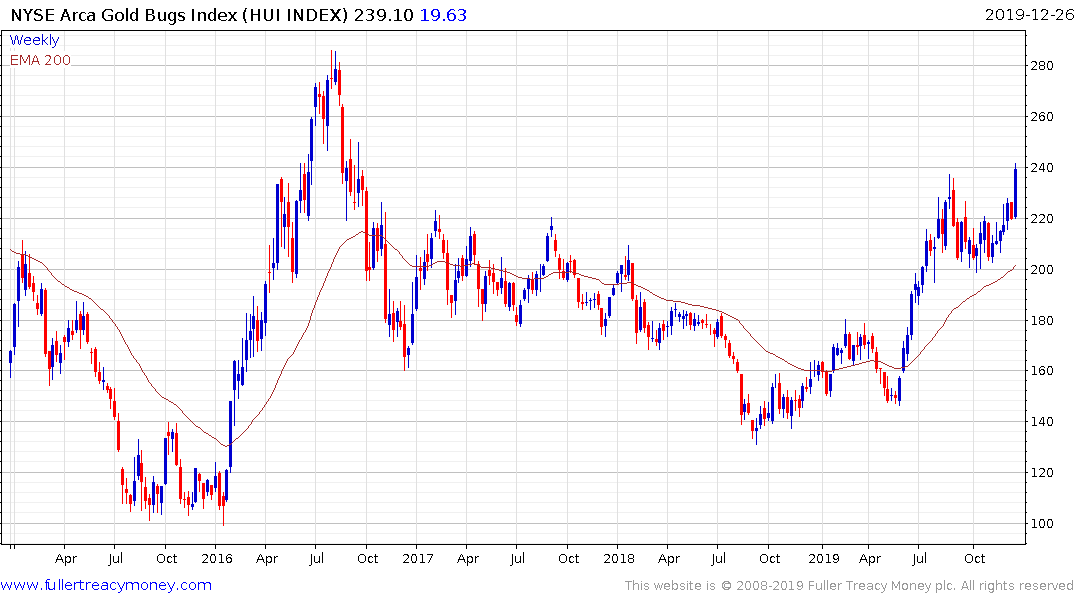 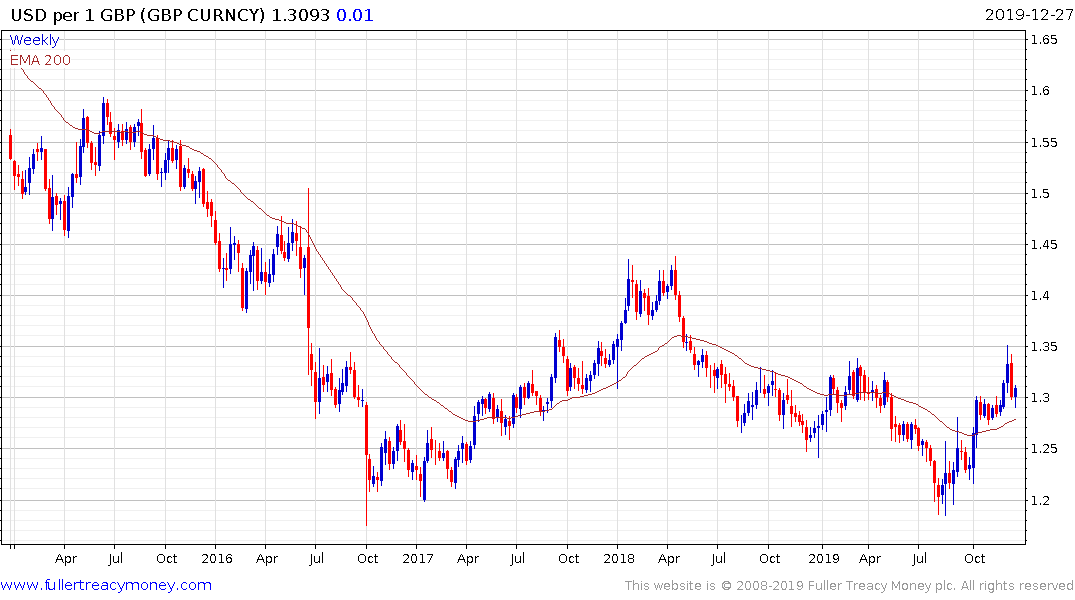 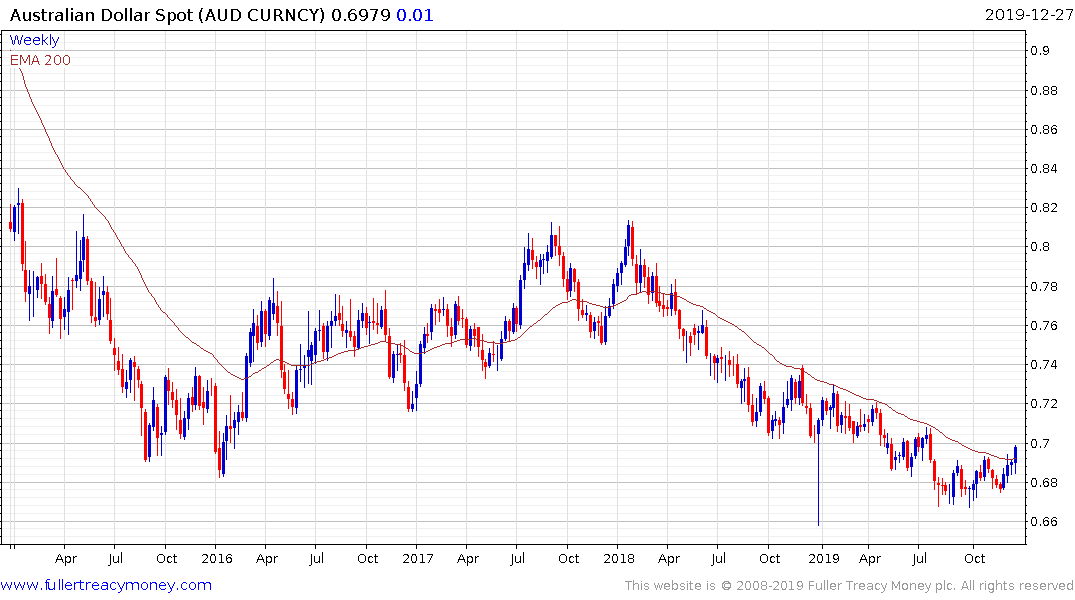 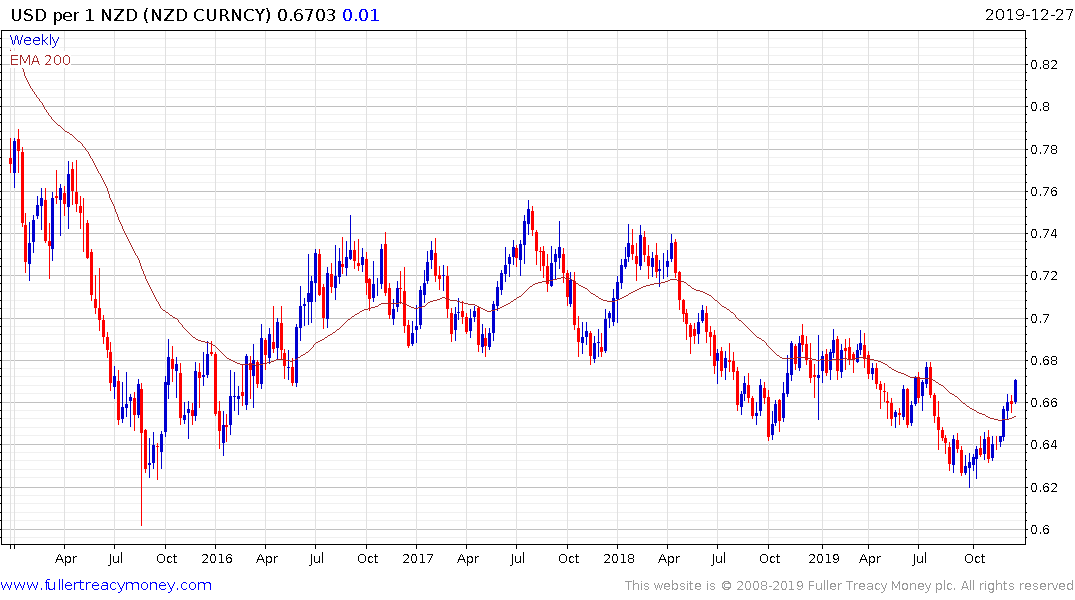 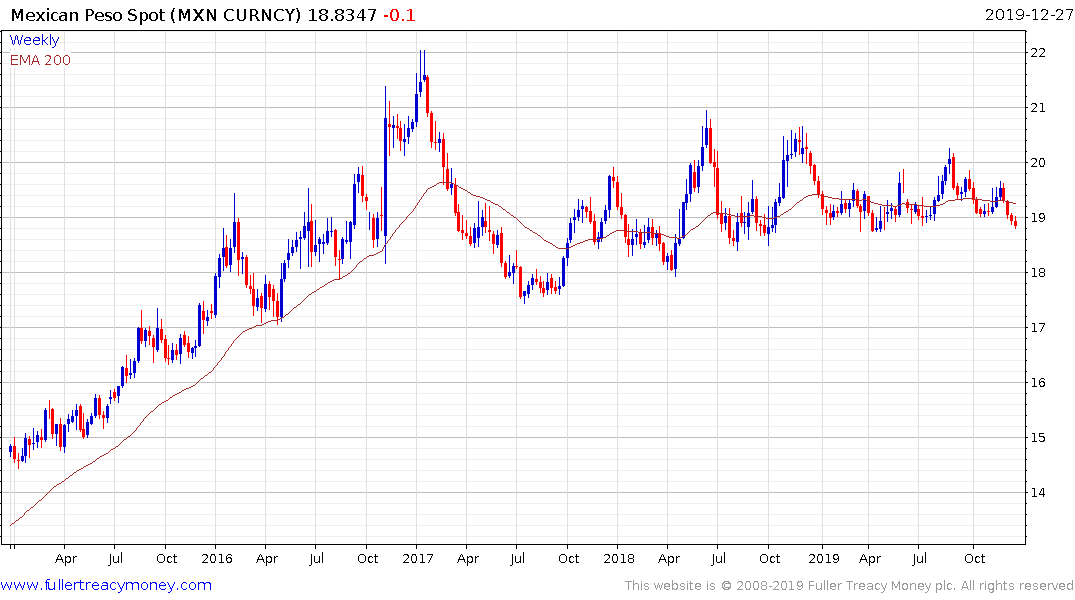 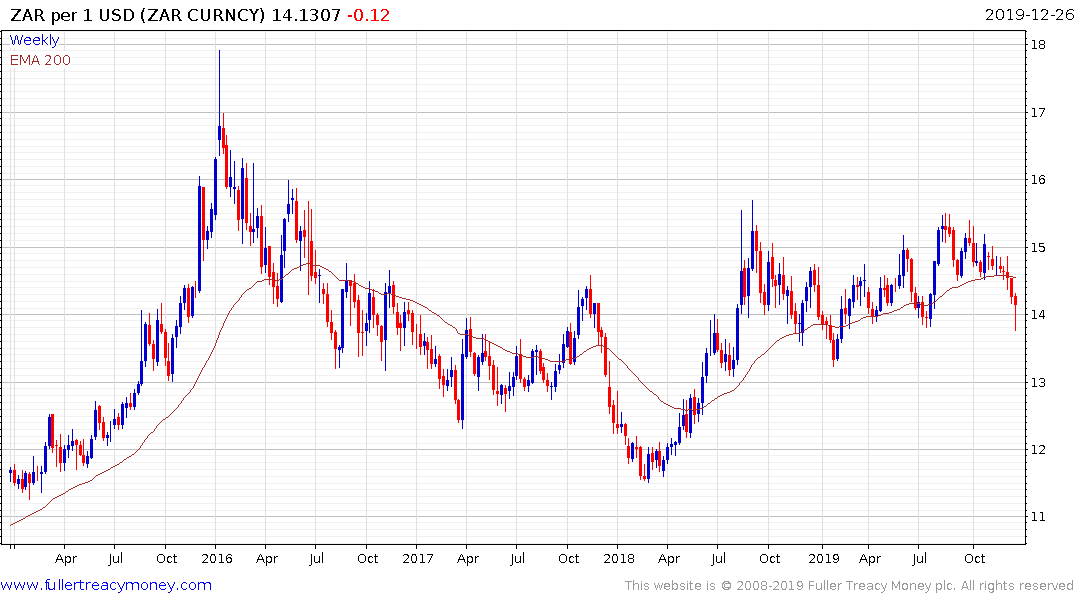 The British Pound, Australian Dollar, New Zealand Dollar, Mexican Peso and South African Rand are all in varying stages of breaking their downtrends against the Dollar. 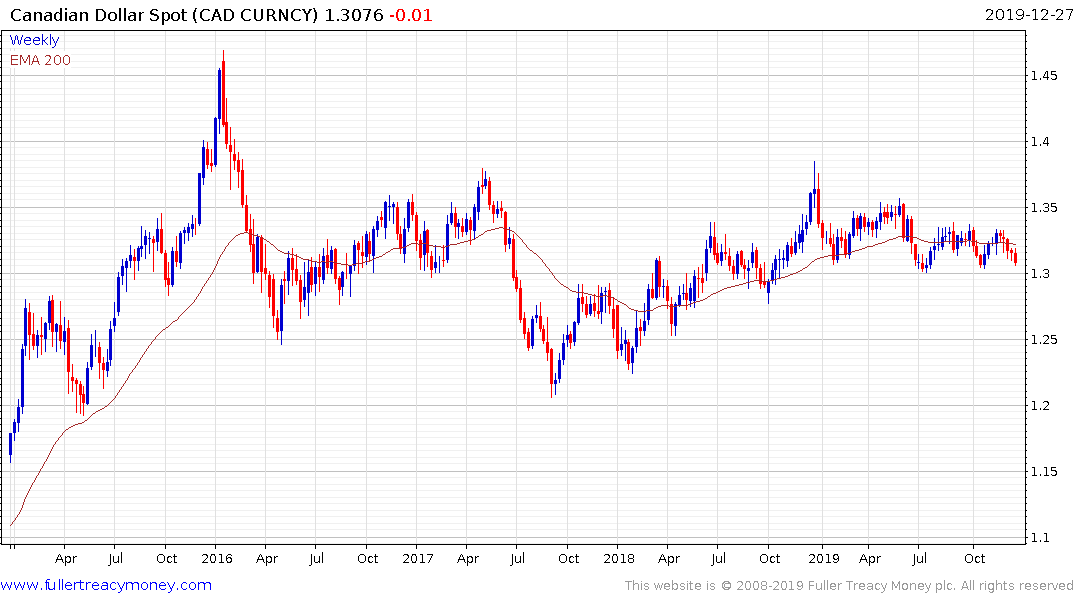 The Canadian Dollar is lagging somewhat but also looking likely to strengthen from here.