For China, Kicking a $9 Trillion Habit Is Tough
Comment of the Day

For China, Kicking a $9 Trillion Habit Is Tough by Eoin Treacy

For now, Beijing doesn’t appear to have many options: The fact that activity is picking up even as officials attempt to calm nerves in the interbank funding market shows the economy’s deeply rooted, steadfast reliance on these institutions for credit, especially when banks are flinching.

For years, trust companies worked alongside China’s banks to keep credit flowing in the system. The headline drop in their assets under management has largely come from a decline in trust beneficiary rights products. These are loans put in a trust special-purpose vehicle, which effectively allows banks to reclassify souring debts. Trust companies have also acted as agents between companies lending to each other. Together, so-called entrusted loans and trust loans stood at 20.1 trillion yuan at the end of the first quarter.

Most of trust-backed products are concentrated at regional lenders – the likes of Baoshang Bank Co., which was recently taken over by regulators. In the early part of 2017, such products, in the form of investment receivables, increased between 10% and 40% at smaller banks. At Baoshang, they rose close to 15% and stood at 153 billion yuan, or a quarter of its assets, according to its latest financials.

When I was the Bloomberg account manager for DWS in Luxembourg back in the early 2000s one of the primary roles the team had was to create special purpose vehicles for loans of dubious quality that management of Deutsche Bank wanted to keep off book. We all know how that turned out and the bank is still reeling from its experiment with balance sheet leverage.

The opaque manner in which the Chinese trust sector acts to facilitate the movement of capital is an amped up version of the practices that went on in the EU ahead of the financial crisis and it is reasonable to expect they will end the same way. That is why there is such a clear effort underway from the Chinese authorities to try and contain speculative activity in the financial sector.

Considering the capital controls in China they do have the opportunity to avoid a credit crisis but the cost will be to avoid the kind of massive stimulus they have relied on previously. That it is an issue for the global economy because China’s willingness to run massive deficits is one of the primary liquidity levers asset price inflation. If China were to ever get truly serious about deleveraging it would represent a significant threat both to domestic growth and global growth. 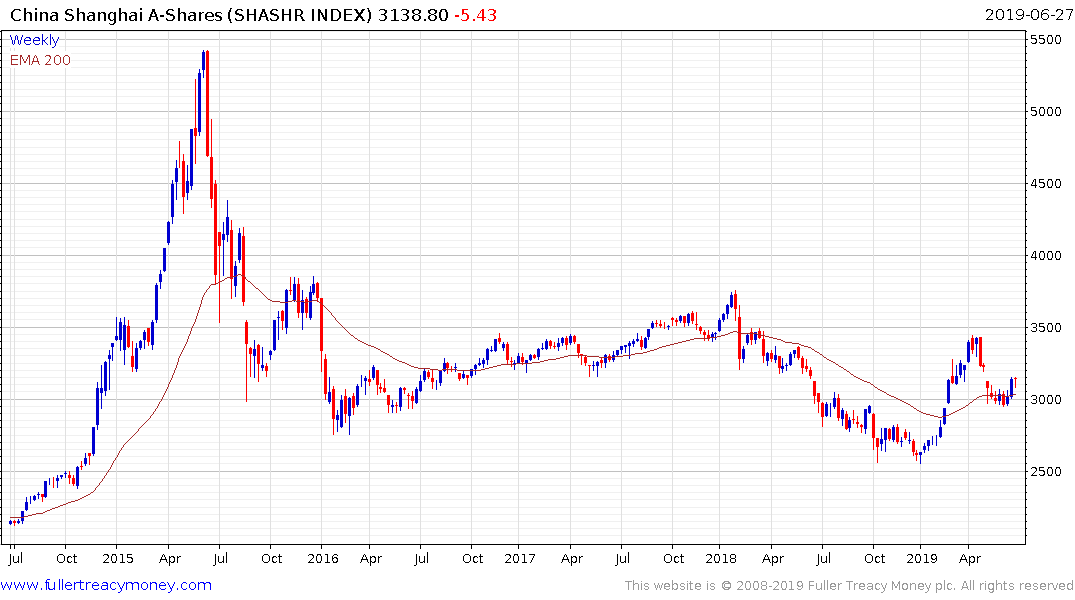 In the near-term, the Shanghai A-Share Index has bounced from the region of the trend mean and a sustained move below it would be required to question potential for higher to lateral ranging.