We expect the stocks to trade above their historical averages on P/BV given cleaned-up balance sheets and lack of foreign ownership. Hence, we assign core F19e multiples of 1.1x for SBI and BOB and 1x for PNB . This compares to the three-phase residual income model approach we previously used to value corporate banks. The table below summarizes our key assumptions for these banks: cost of equity (no change), sustainable RoE (no prior assumptions because we used RI models),and long-term growth (no prior assumptions because we used RI models). We leave the valuations of non-bank entities and cost of equity unchanged. This drives the price target and scenario value changes at these banks. We double upgrade SBI and PNB to OW. We upgrade BoB to EW.

Both ICICI Bank and Axis have been affected by continued NPLformation and inability to get ahead of the problems. These banks are not the direct beneficiaries of the government's move. However, they should benefit in two ways:

1. With SOE banks properly capitalised, they can finally see proper clearing of NPLs in the system.

2. This makes it easier for the RBI to implement IND-AS in F19 as SOE banks will not be constrained by capital from taking the necessary hits. The implementation will allow private lenders to recognise losses in the transition period, raise capital (if needed),and potentially move to normalised provisioning from F19 itself.

India has hundreds of millions of young people entering the workforce over the next decade and has one of the lowest average aged populations in the world. In order to deliver a path to a better standard of living, which can ensure social cohesion, it is going to need credit growth.

Credit for people to start businesses, buy homes, cars, motorcycles, refrigerators etc and for industry to fund manufacturing, ports, roads and railways are all dependent on a healthy banking sector ready to extend credit. By cleaning up the balance sheets of the state-owned banking sector a major obstacle has been removed from future credit growth.

Meanwhile I agree with the authors of the report that the pace of adoption of online banking and the competitive advantage the private sector has in this sector means they will likely continue to represent a better play on the consumer over the medium to long term. 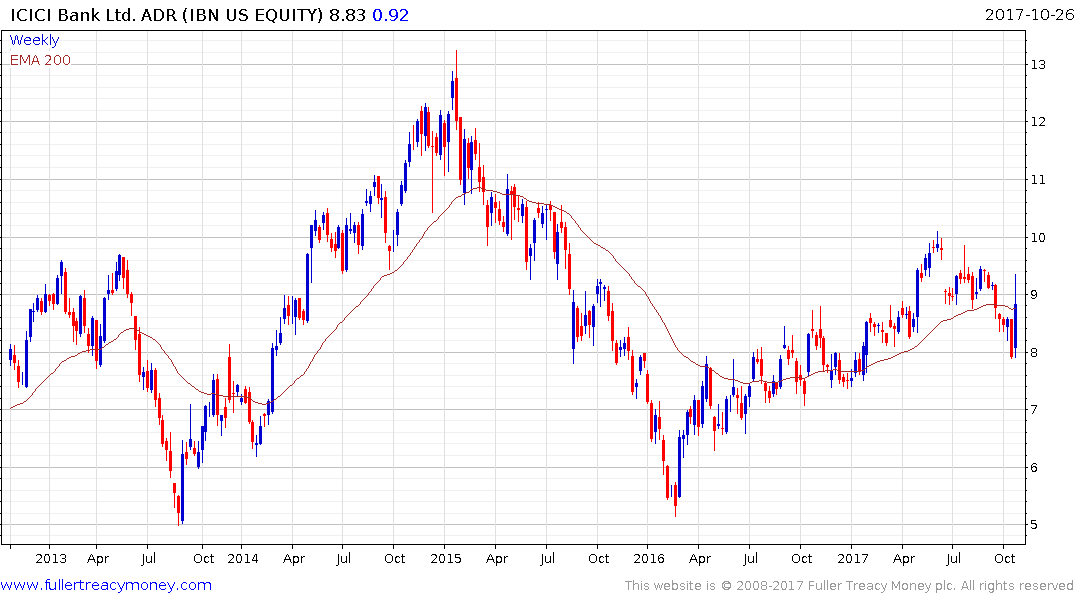 ICICI Bank has a US listed ADR and rallied impressively yesterday from the region of the trend mean to confirm near-term support in the $8 area. 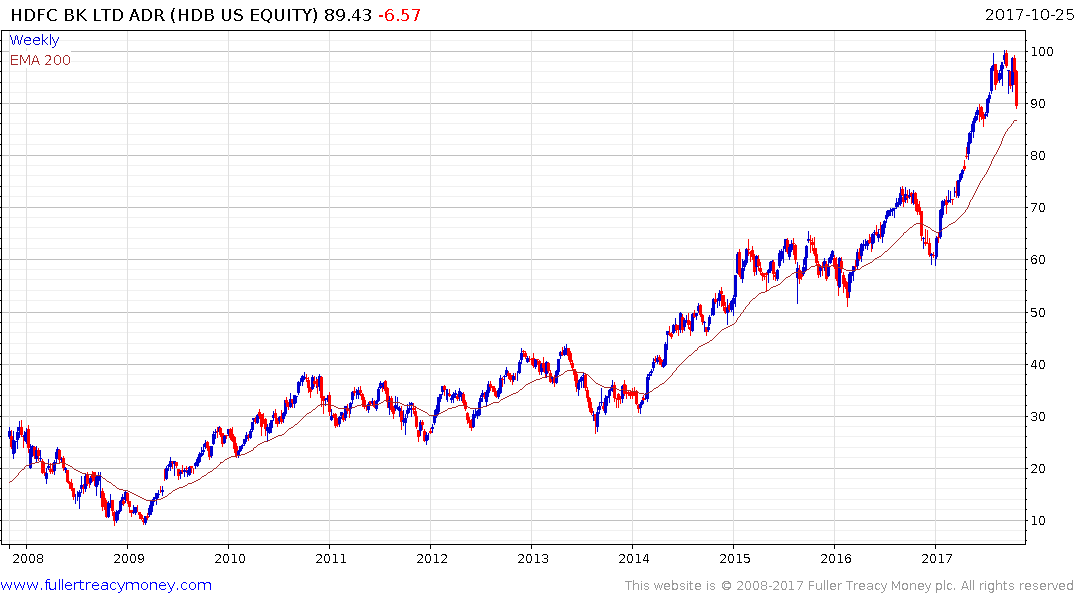 HDFC’s US listed ADR pulled back sharply to test the region of the trend mean on yesterday’s news and will need to hold the $87 area if the medium-term trend is to remain consistent. 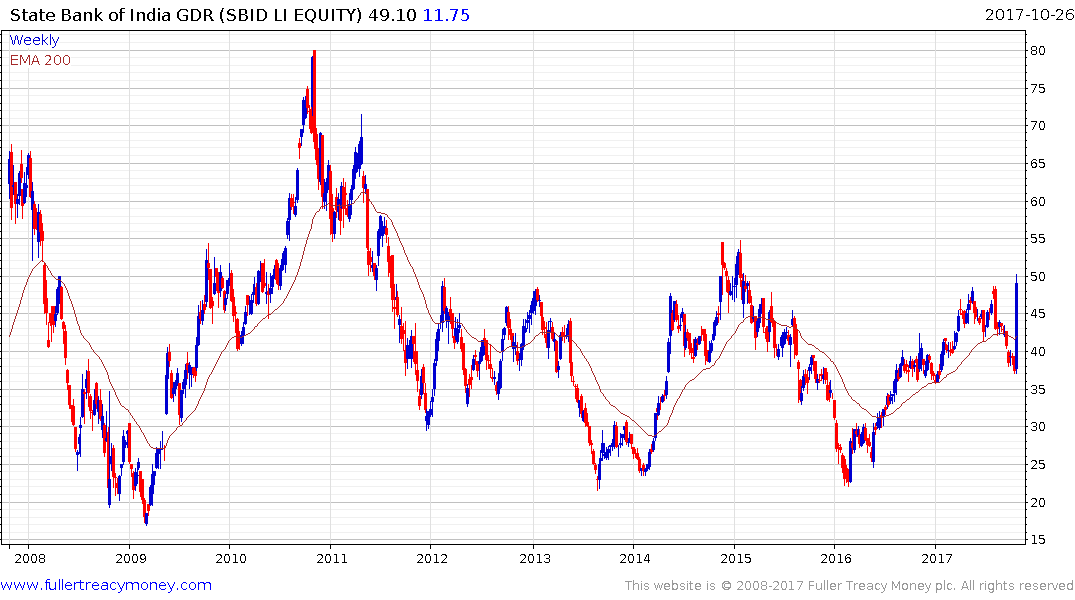 State Bank of India is listed on the London International Exchange and bounced emphatically yesterday. 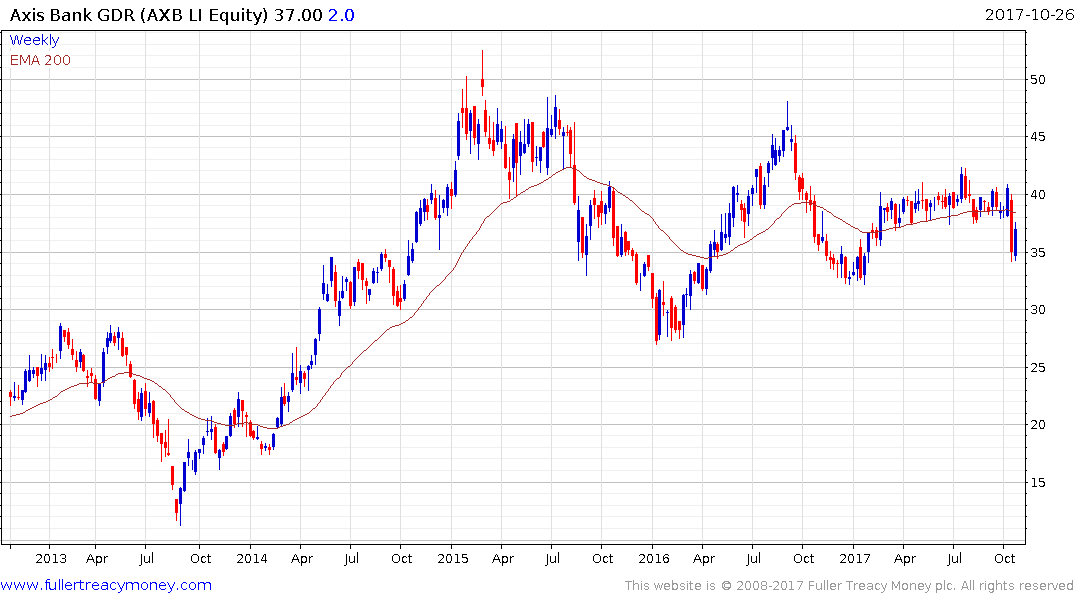 Axis Bank also maintains a UK listing on the Intentional Exchange and bounced today following last week’s abrupt decline. It will need to hold the $35 if potential for higher to lateral ranging is to be given the benefit of the doubt. 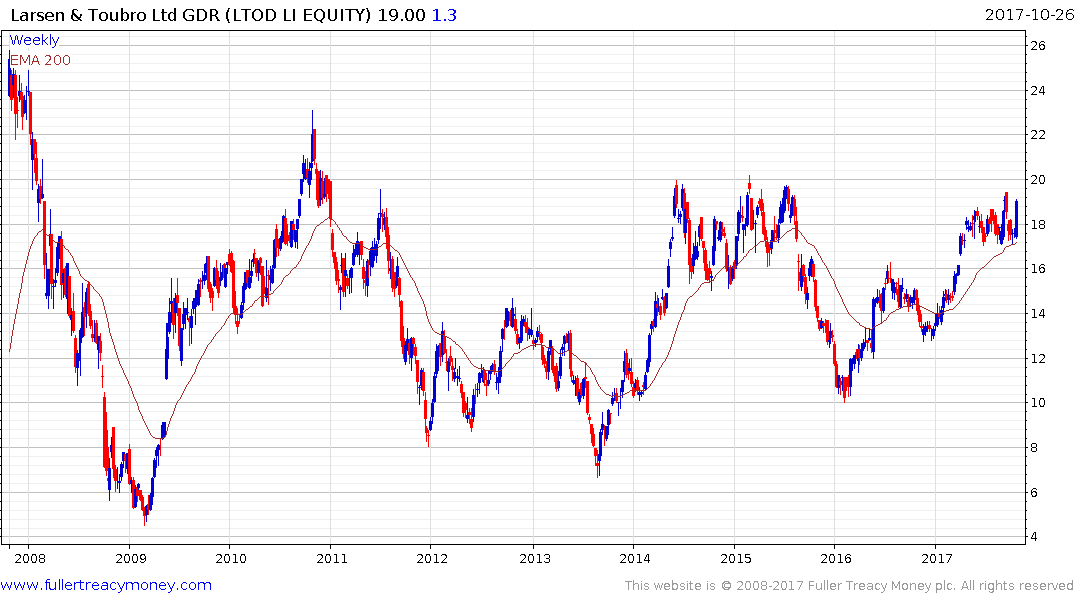 Larsen & Toubro, one of India’s largest infrastructure companies, is also listed on the International Exchange. It is now testing the upper side of a seven-year range. 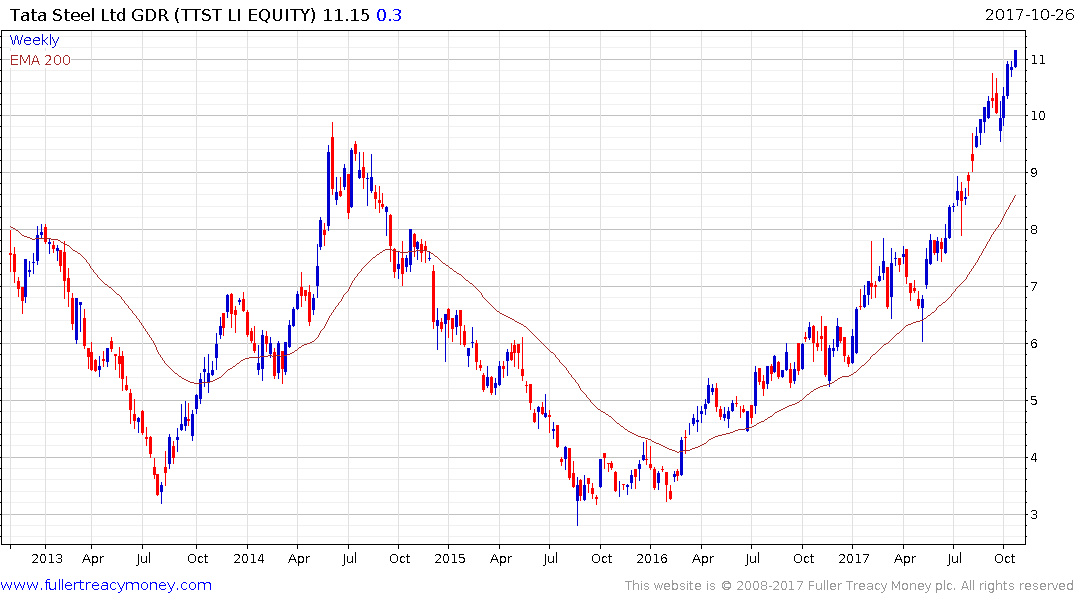 The pace of Tata Steel’s UK listing’s uptrend has picked up over the last few months as it extends the breakout to new recovery highs. A clear downward dynamic would be required to check momentum beyond a pause. 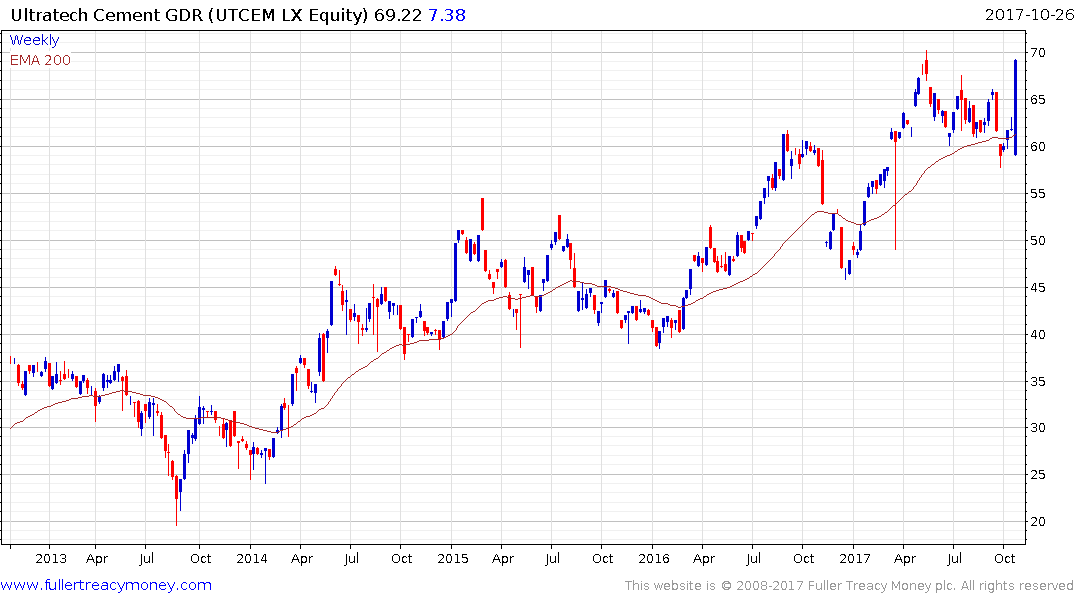 Ultratech Cements Luxembourg listed GDR surged higher this week to confirm support in the region of the trend mean.

Here is a link to the Indian ADRs & GDRs section of the Chart Library.