Fed to Increase Supply of Bank Reserves
Comment of the Day

Fed to Increase Supply of Bank Reserves by Eoin Treacy

The Fed’s plan hasn’t been finalized, but Mr. Powell suggested would be ready by or before officials’ Oct. 29-30 policy meeting. The goal would be to rebuild the level of reserves in the system sufficiently above the low point of less than $1.4 trillion reached last month.

The demise of institutional prop trading and the requirement on banks to hold “Tier 1 capital”/government bonds mean there is no additional liquidity to contain spikes beyond the upper setting for repo rates. The Fed has no choice but to supply that liquidity.

At the same time the continued strength of the Dollar is a factor is siphoning Dollars out of the system because any return is better than a negative return on overnight deposits. In extremis that puts an almost unlimited call on the Fed’s balance sheet which is not being discussed.

The net effect of buying short-term securities will be to drive down their yields. If the longer end of the curve is untouched the yield curve will steepen.That is the same as easing regardless of how one frames the rationale.

Since late August the 10-year - 2-year spread has risen from -0.05% to 0.12% for a gain of 17 basis points. It is currently testing the lower side of the overhead trading range and a sustained move above 30 basis points would break the almost three-year sequence of lower rally highs.

This is a particularly important spread to monitor because when it surges higher following an inversion it is an urgent warning of impending trouble in the economy and stock market. 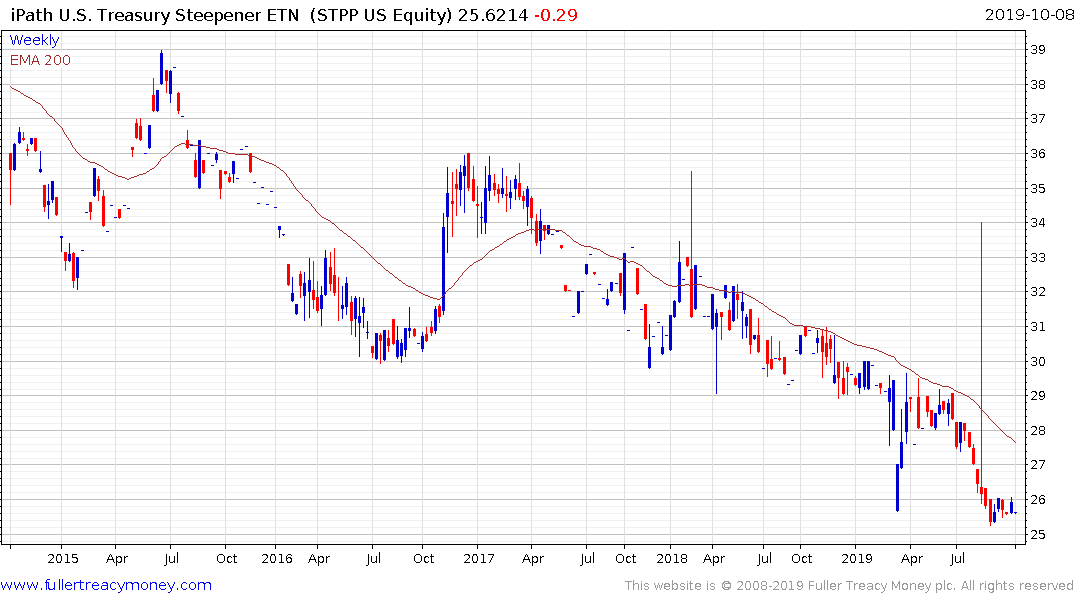 The US listed iPath US Treasury Steepener (STPP) has not done a very good job of managing contango risk and is very illiquid with only $4 million under management.

Alternatively, the US listed IVOL (Quadratic Interest Rate Volatility and Inflation Hedge ETF) is an actively managed ETF which is designed to profit from volatility in the fixed income market, increasing inflation expectations and/or a steepening yield curve.

There is a rationale argument to thinking these kinds of steepener instruments offer a hedge against economic woe.