Volume at the Federal Reserve’s facility for overnight reverse repurchase agreements is poised to climb on the last trading day of the month, surpassing Thursday’s record, as global banks pull back on their balance sheet activity for regulatory purposes.

Wrightson ICAP said it’s likely demand for the Fed’s RRP moves above $500 billion level, but will be looking for some pullback in activity on June -- though any dip may be temporary

RRP usage surged to $485.3 billion Thursday, a record since the facility started in September 2013 and up from $450 billion in the prior session

The rate on overnight GC repo opened at -0.01%, according to Oxford Economics. Treasury bills out to September are yielding less than 1.5bp. On the unsecured side, three-month Libor dropped to a fresh record low of 0.13138% from 0.13463% in the previous session

The glut at the front-end has been spurred by the central bank’s ongoing asset-purchase program, commonly referred to as quantitative easing, as well the drawdown of the Treasury’s general account. The latter has been driven by the looming debt-ceiling reinstatement, which is due to take place at the end of July, and the flow of pandemic stimulus funds to taxpayers

Federal relief payments to state and local municipalities are also adding to the oversupply, and that’s being exacerbated as regulatory constraints encourage banks to turn away deposits, directing that cash into money-market funds

There was a lot of concern at the prospect of banks turning away deposits and the impact that would have on money market funds a couple of months ago. Since then, the Fed has acted to support banking operations. Additional supports are now going to be required to ensure money market funds do not see negative yields. That may require stepping up asset purchases in an effort to mop up excess liquidity.

We have been living in a liquidity fuelled world since 2008 and nothing has happened to question the persistence of this environment. Despite worries about valuations, growth and recovery, the reality of abundant liquidity continues to support asset prices.

Gold prices are rebounding now because the reality of negative real interest rates and the permanence of that condition are creating demand for a hedge against real-time devaluation of fiat currencies. The price is currently in close proximity of where resistance was encountered in November, January and all the way back in 2011. The size of the downward dynamics from these areas is something that will likely influence investor sentiment as the $1900 level is tested. 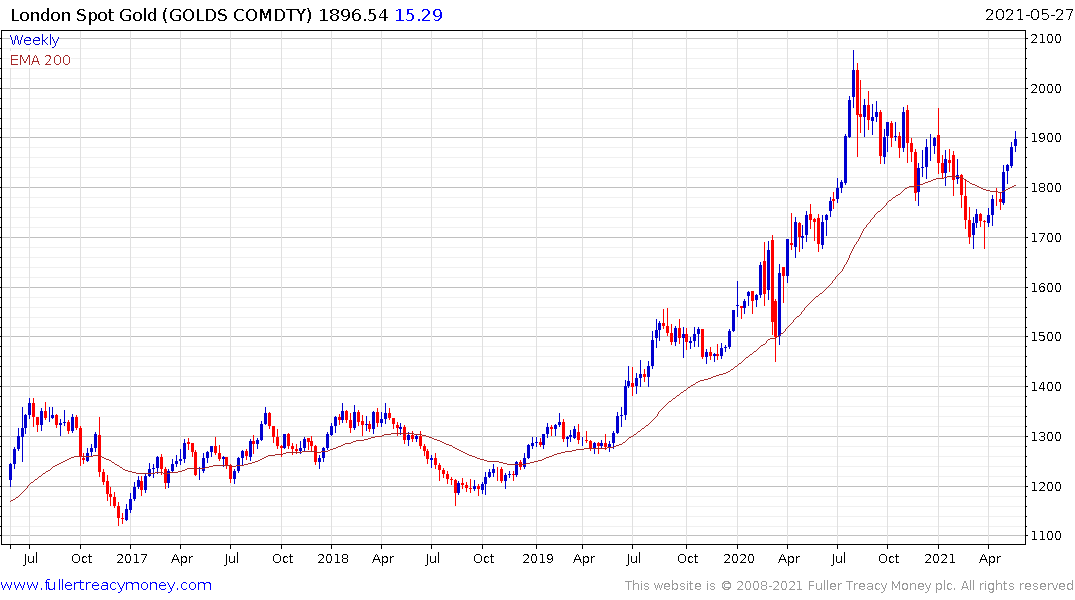 This is the largest rally gold has posted since the peak in August so it is reasonable to conclude the correction has bottomed. A higher reaction low, during the first significant consolidation would confirm that view.