Federal Reserve policy makers on Wednesday highlighted the importance of fiscal stimulus for an economic recovery that recently has outperformed forecasts. Chairman Jerome Powell continued to wave the fiscal flag carefully at a congressional hearing -- amid a political stalemate over a new package -- saying that more support was likely to be necessary. Others were more full-throated, with Cleveland Fed President Loretta Mester saying it was very much needed given the “deep hole” the economy is climbing out of.

Chicago Fed President Charles Evans expressed concern the stimulus he penciled in won’t be forthcoming, while Boston Fed President Eric Rosengren suggested it’ll take another wave of infections to prompt action, and likely not until next year.

Declines in the stock market, until recently attributed to a reversal of excessive tech-share gains, have increasingly been attributed in part to worries about the recovery and the need for more stimulus. The S&P 500 Index was down 1.7% as of 2:22 p.m. in New York, the fifth drop in six days.

“The most difficult part of the recovery is still ahead of us,” Rosengren said in remarks Wednesday, saying he was more pessimistic than his colleagues over how many Americans will return to work over the next 15 months.

The impending bitter dispute between the Democrats and Republicans about the latter’s determination to approve a new supreme court justice before the election has pretty much shelved any hope of additional stimulus before the election. Add to that the real potential that an election result may not be immediately available and the timeline for when an additional fiscal stimulus will be agreed gets pushed further out.

The only way the need for an additional stimulus can be avoided is if the entire economy opens up again in the short term. That looks like a very unlikely possibility because so much political capital has been spent on scaring the population. Unwinding it without a clear solution, like a vaccine, will be near impossible. 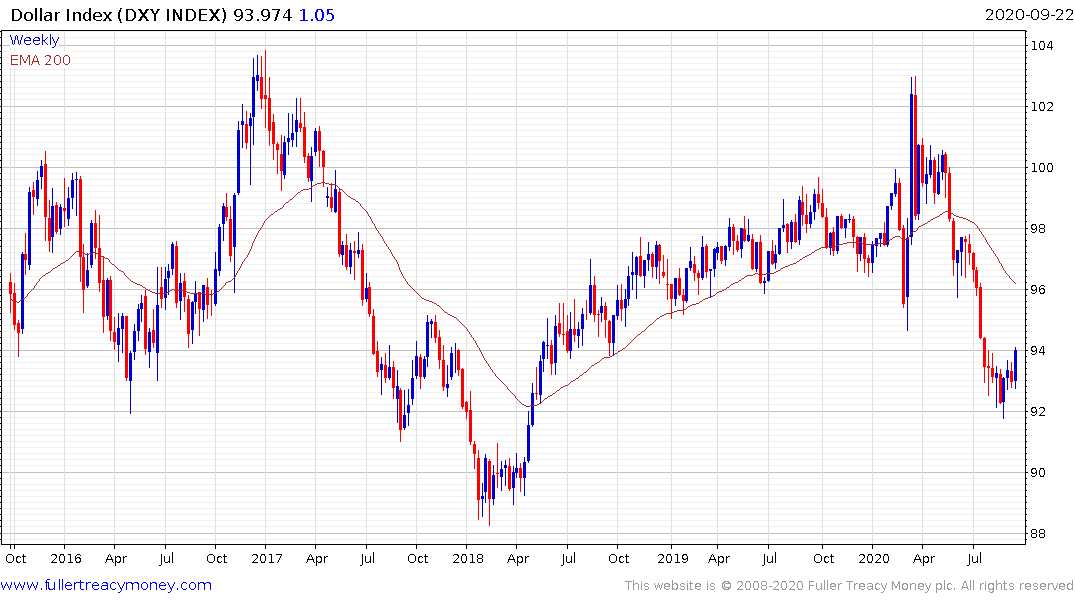 The lack of new Dollars supply hitting the system in the short term is supporting its value. That’s particularly true because other countries like Canada, Australia and much of Europe are all preparing additional fiscal stimulus packages. The Dollar Index rallied yesterday to breakout of its short-term range. That suggests clear scope for an unwinding of its oversold condition relative to most other currencies in the short term. 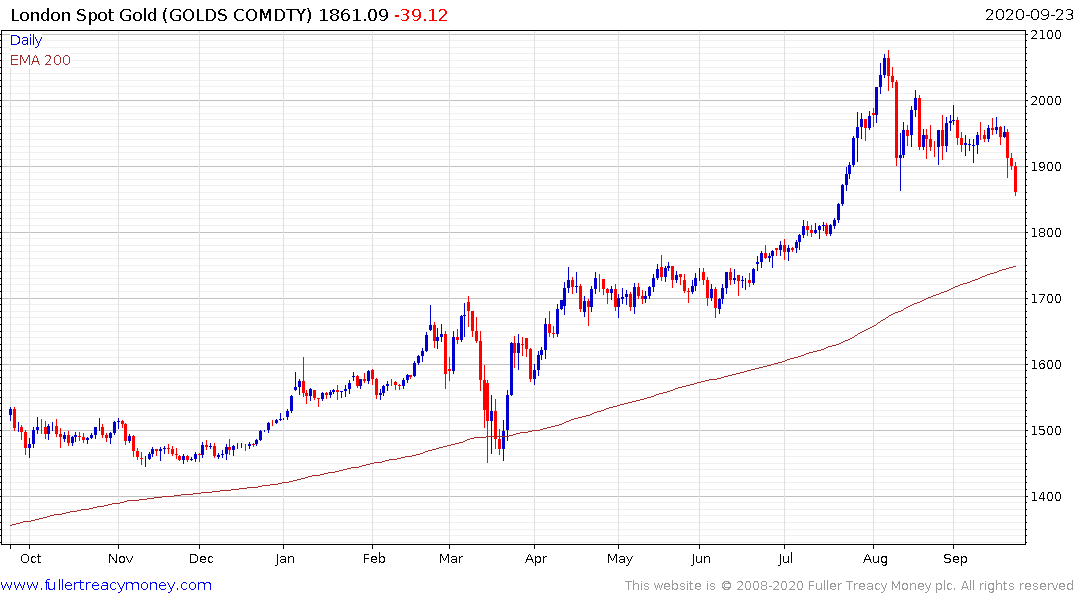 Gold hit a new closing low today as it breaks below the psychological $1900 level. A swift completion of the unwinding of its overextension relative to the trend mean is not unusual following a range that unwinds about half it. That’s what I have been expecting for the last month and it now appears to be unfolding. 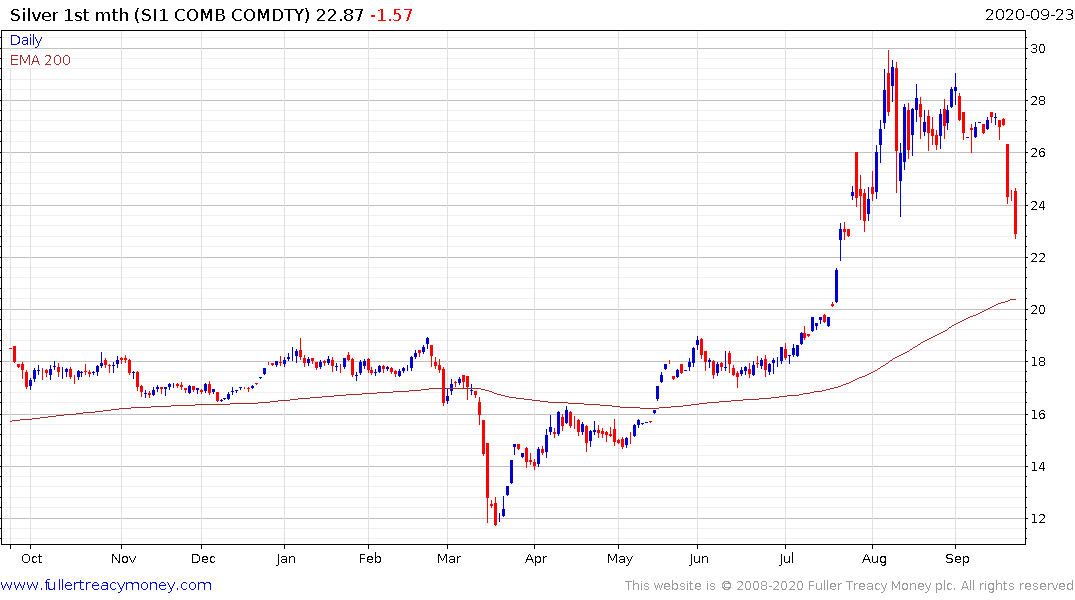 Silver’s outperformance relative to gold is likely to cease for as long as this corrective phase lasts.

The Fed has so far been reticent to provide additional liquidity because they basically want the government to agree spending measures to support consumers. They would then step in a buy the bonds issued to finance the deficit. This is the essence of Modern Monetary Theory in real time. 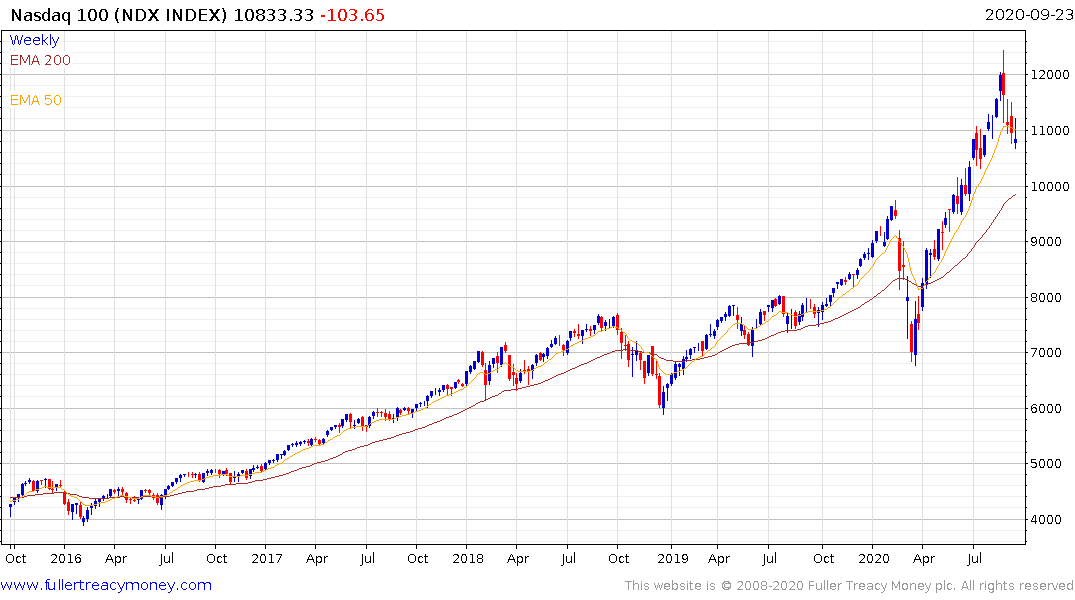 The big question is how much of a stock market decline will be required to force the issue. Right now, it is the Democrats interests to have a weak economy to improve their chances of winning the election. That’s the chief uncertainty in this corrective phase.