Over the past week, the Federal Reserve has hit the U.S. dollar funding markets with a barrage of liquidity and tools to ensure they remain lubricated. Yet indicators of funding stress are still showing pressure.

In an emergency action Sunday, the central bank slashed interest rates to zero, adjusted the parameters of global dollar swap lines, in additional to offering trillions of dollars of liquidity via operations for repurchase agreements. Here’s what some of the key metrics have to say about the level of distress in the financial system:

Despite the Fed action, the repo market remains volatile. At one point during Monday’s trading session, the rate for overnight general collateral was around 2.50%, according to ICAP, which is well above the central bank’s new target range for the fed funds rate of 0% to 0.25%. While the bid-ask spread is now around 2%/1.25%, the central bank said it plans to conduct another overnight repo offering of up to $500 billion.

Cross-Currency Basis Swaps
The Fed on Sunday also lowered the rate on its U.S. dollar liquidity swap lines in coordination with other central banks. As a result, the three-month cross-currency basis for dollar yen -- a proxy for how expensive it is to get the greenback -- briefly spiked to its widest on record Monday in Asian trading before pulling back, according to Bloomberg data since 2011. Strategists at Bank of America believe volatility may persist until the Fed fixes the commercial-paper market and there are “more avenues available to secure USD funding.”

Libor-OIS
The gap between the London interbank offered rate and overnight index swaps expanded Monday to the widest level since 2009, led by an increase in Libor’s three-month tenor.

Widening: QuickTake
Rates on three-month commercial paper for non-financial companies reached the highest level since the financial crisis relative to OIS. This suggests companies may be having difficulty selling commercial paper, as they tend to do during times of stress. As a result, Wall Street strategists expect the Fed to announce a resurrection of a crisis-era facility for commercial paper.

The Fed reactivating swap lines between other central banks, cutting rates to zero, reducing reserve requirements for banks to zero and announcing a $700 billion quantitative easing program all point to a clear effort to ensure the financial system remains liquid as the economy shuts down. Ensuring liquidity is a priority for central banks but it is a factor that sends a signal to stock market investors that there may be something else they need to pay attention. 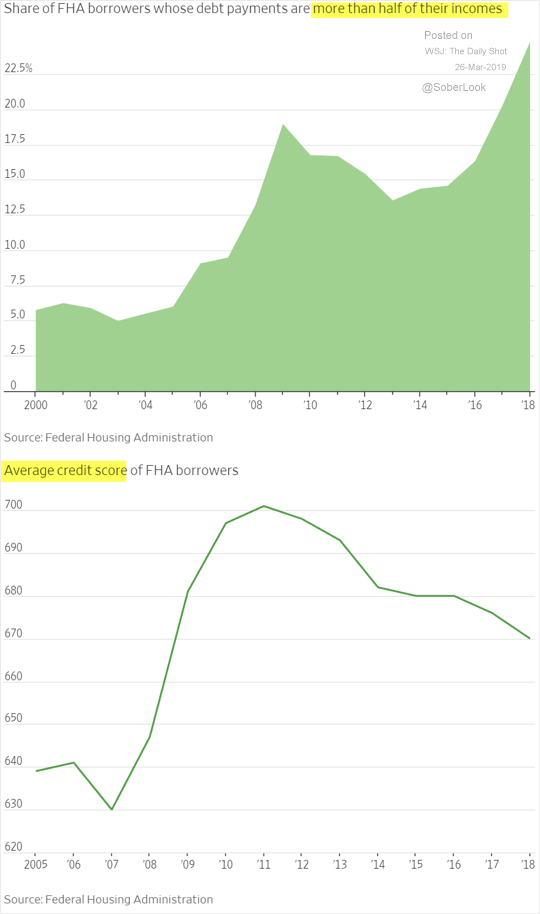 I’ve been thinking a lot about the fact the things we may have worried about last year are made worse by the virus. I rediscovered this graphic illustrating that the number of highly leveraged US mortgage holders with a record number of people spending half their income on payments. Missing a couple of weeks of wages is a hiccup for many people but it is an existential crisis for highly leveraged individuals; living paycheque to paycheque. The clear solution will be payment holidays but that is not yet apparent. If these kinds of extraordinary measures are not taken it will deepen the economic contraction.

Gold and the other precious metals pulled back sharply today in sympathy with the stock market. This kind of action does not make a lot of rational sense. Of course, we are not in a very rational environment but it is the kind of scenario that will create opportunities. 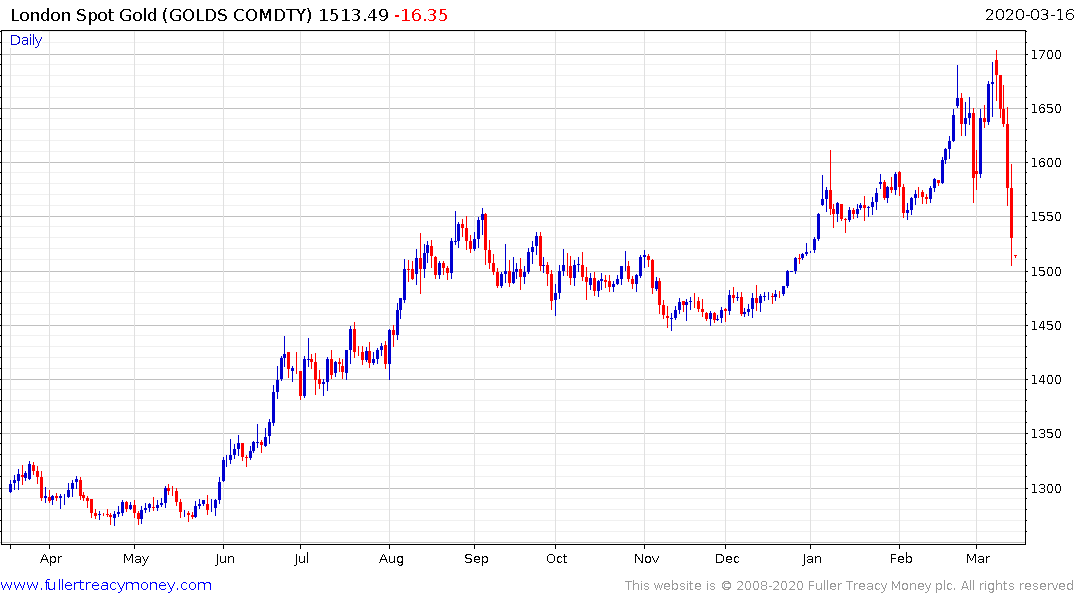 Gold has continued to hold the $1500 area which coincides with the region of the trend mean. 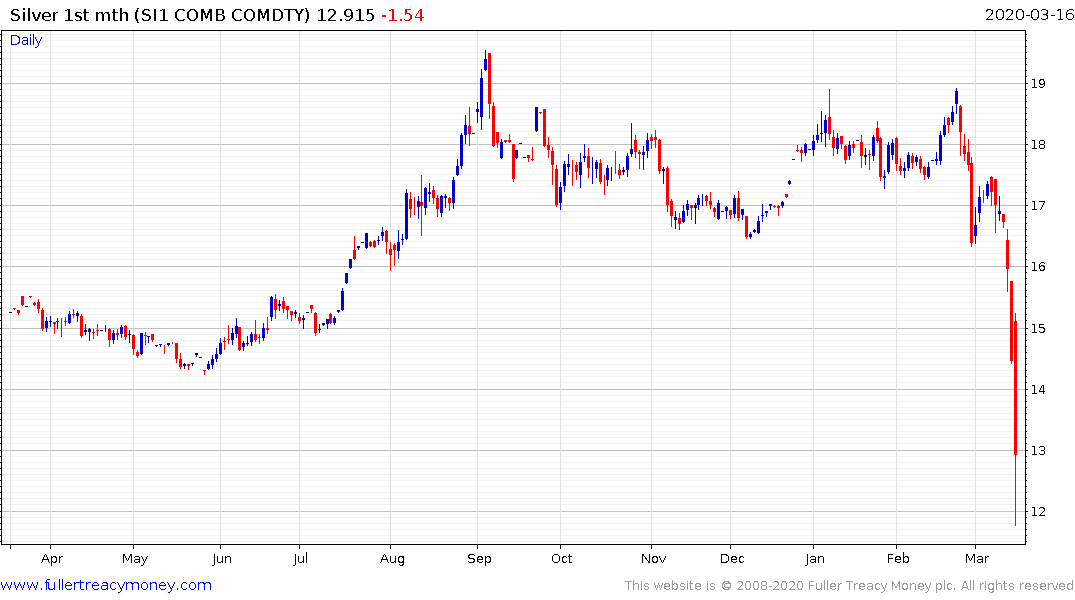 Silver pulled back by $3 at one point today before paring the decline somewhat. It has not traded at current levels since 2009 so there is no argument about value quickly accruing. 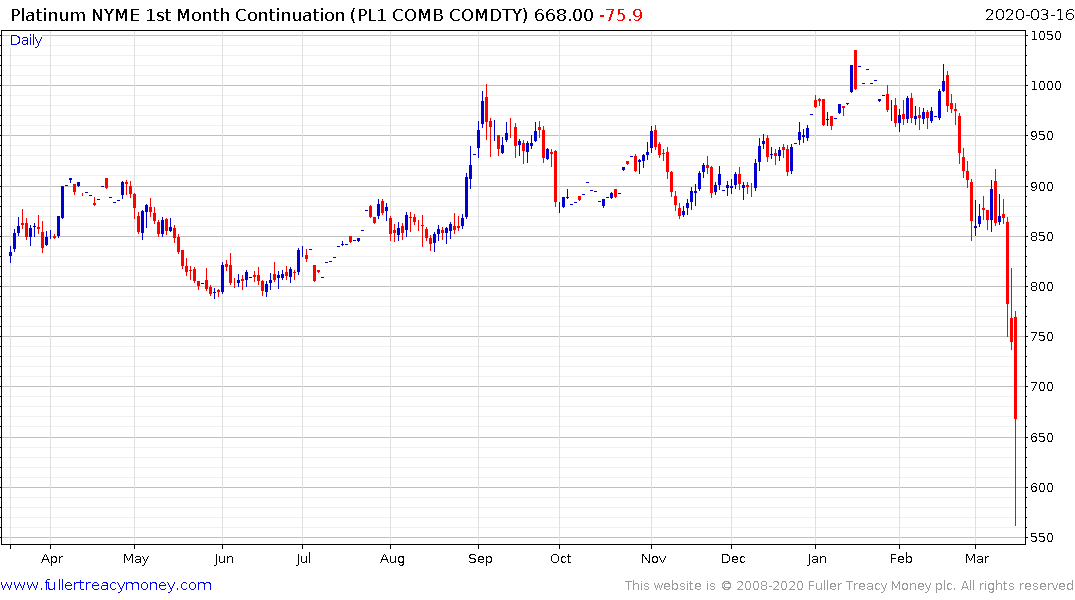 Platinum dropped more than $200 at one point today. That is incredibly climactic action. 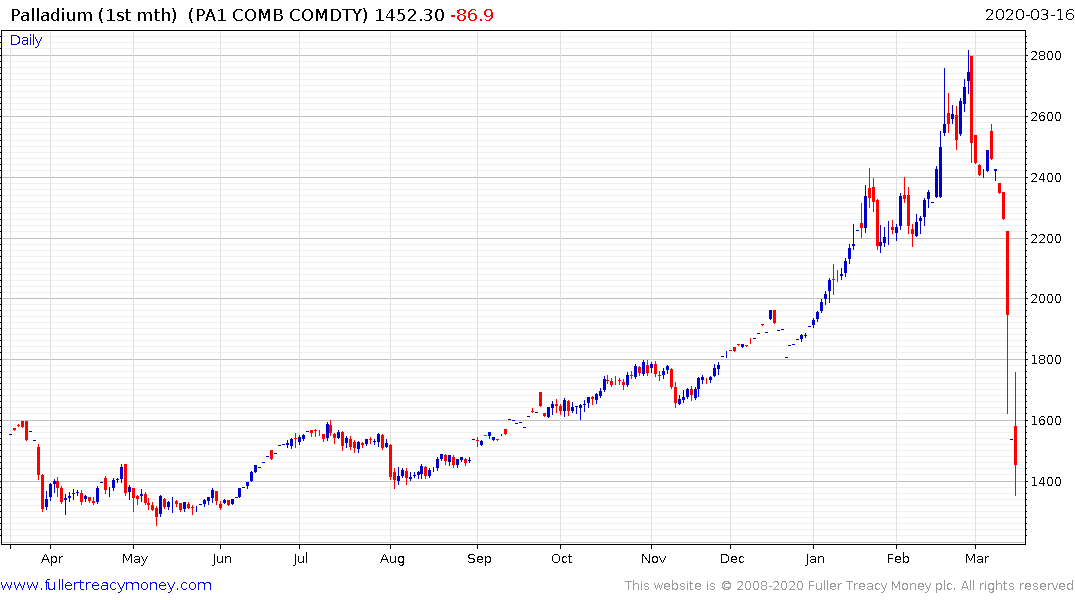 Palladium has halved in two weeks and is likely to remain under pressure as demand for vehicles subsides. 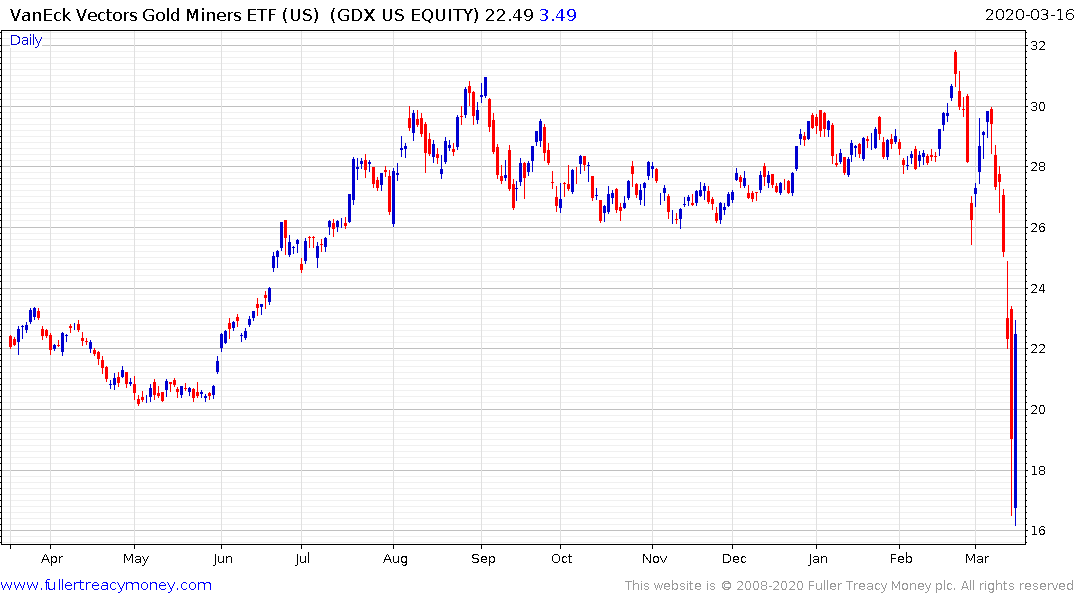 Gold shares rallied impressively today, as the realisation that gold miners will be among a select number of companies likely to bear earnings expectations this quarter. I was certainly not expecting to see a pullback like this but it represents a reset and entry point not seen since early 2016.

If we consider the market from something approaching a rational perspective, the gold market was not immune from contagion selling. However, once the contagion abated the market just about tripled in the subsequent three years. The simple fact is the monetary and fiscal responses announced are specifically aimed at debasing the currency to contain the busting a debt bubble. That provides an ideal environment for precious metals to offer a safe haven.