Heralding one of the most hawkish policy pivots in years, the central bank said Wednesday it will double the pace at which it’s scaling back purchases of Treasuries and mortgage-backed securities to $30 billion a month, putting it on track to conclude the program in early 2022, rather than mid-year as initially planned.

The faster pullback puts Fed Chair Jerome Powell in position to raise rates earlier than previously expected to counter price pressures if necessary, even as the pandemic poses an ongoing challenge to the economic recovery. The Fed flagged concerns over the new omicron strain, saying that “risks to the economic outlook remain, including from new variants of the virus.”

Projections published alongside the statement showed officials expect three quarter-point increases in the benchmark federal funds rate will be appropriate next year, according to the median estimate, after holding borrowing costs near zero since March 2020.

That marks a major shift from the last time forecasts were updated in September, when the committee was evenly split on the need for any rate increases at all in 2022. The new projections also showed policy makers see another three increases as appropriate in 2023 and two more in 2024, bringing the funds rate to 2.1% by the end of that year.

The abrupt change in the taper pace reflects “inflation developments and the further improvement in the labor market,” the policy-setting Federal Open Market Committee said in a statement following a two-day meeting. The Fed reiterated that it “is prepared to adjust the pace of purchases if warranted by changes in the economic outlook.”

The Fed intends to follow through on what the bond and swap markets have been pricing in for the last month. Even though this statement is headline grabbing it is not sufficiently surprising to have had an immediate negative effect on the market.

However, the reality is liquidity is being withdrawn, interest rates will begin to rise next year and financial conditions are going to begin to tighten. The most interest rate sensitive portions of the market are short term oversold, so there is scope for a reversionary rally before the bigger challenge of sourcing more expensive liquidity comes to bear.

Meanwhile, as Iain Little points out in his latest fund manager’s diary, financials offer some of the best leverage to rising interest rates. 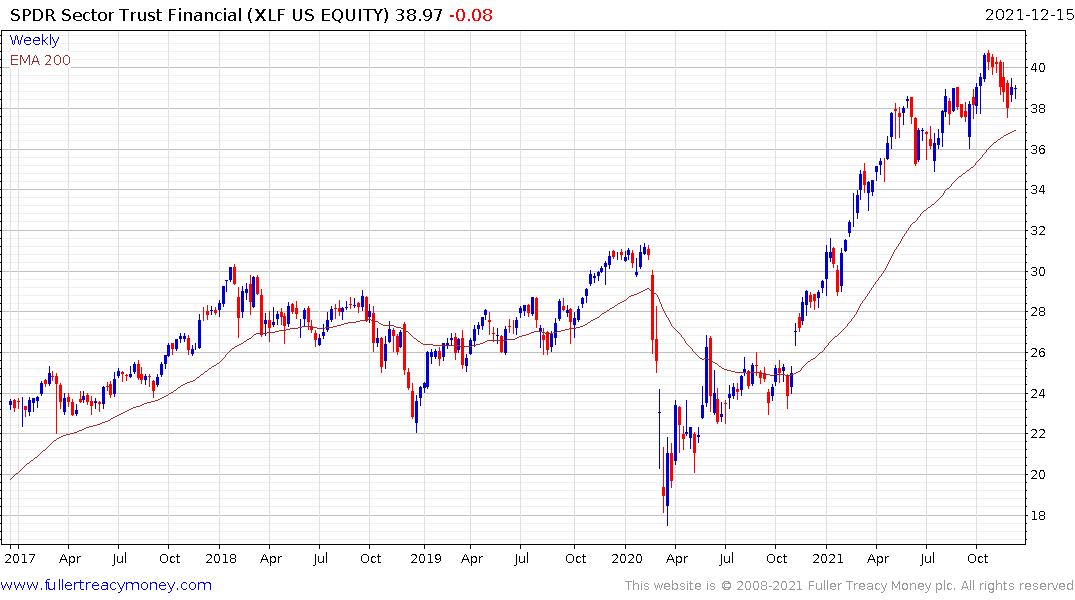 The Financials SPDR remains in a consistent uptrend while the racier portion of the market has sustained a deep pullback of late. 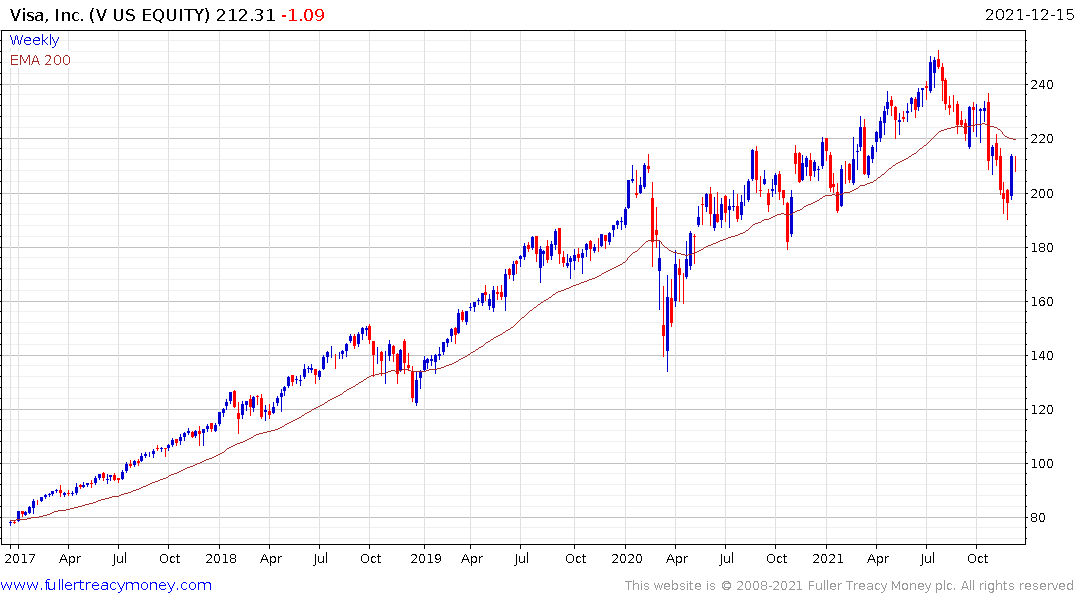 Visa is rebounding from the region of the trend mean, 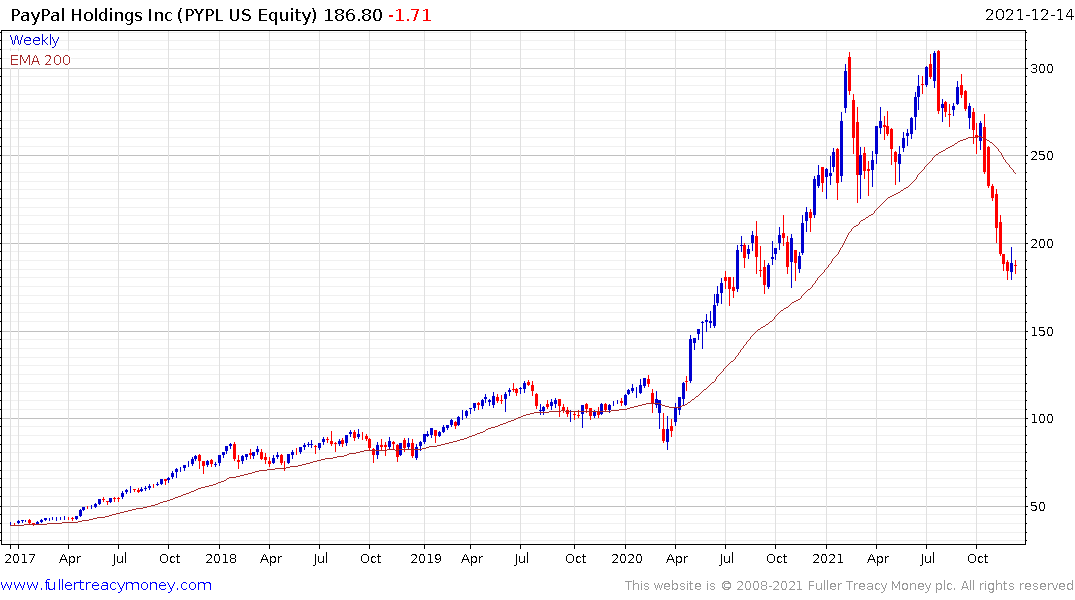 PayPal is short-term oversold and beginning to demonstrate support. This article discussing the surge in the company’s buy-now-pay-later volumes may also be of interest.

Buy-now-pay-later leader Affirm is firming from the region of the trend mean. 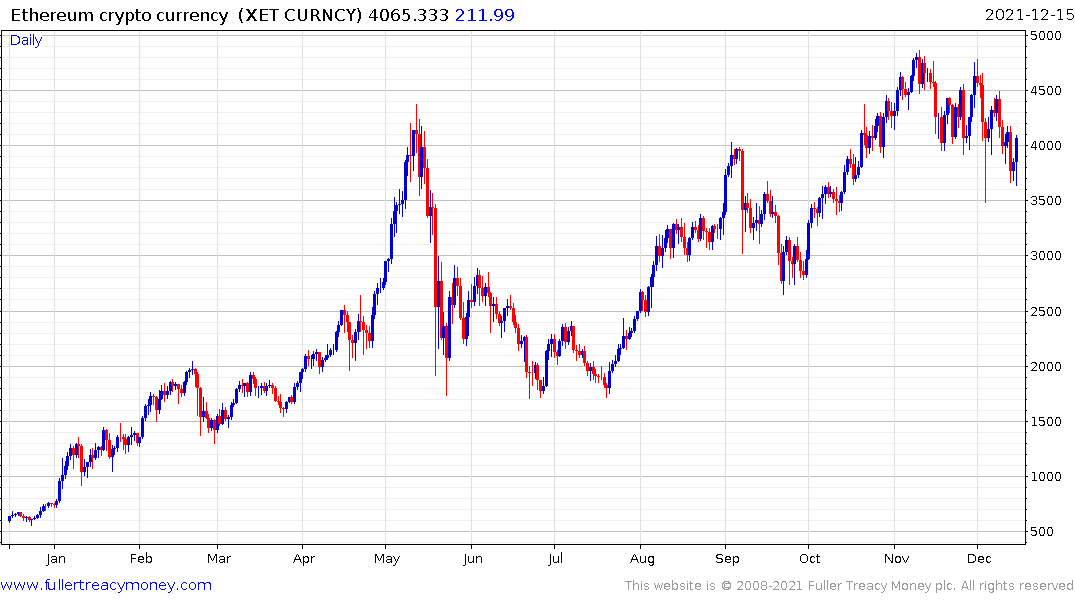