Features of a Bitcoin Bear Market
Comment of the Day

Features of a Bitcoin Bear Market by Eoin Treacy

Since 2013 there have been three major funding currencies for bitcoin – USD, CNY and JPY (Exhibit 12). Our dataset of bitcoin prices from over 350 markets (exchanges or versus different trading currencies) largely covers fiat currencies. Only 10% of the markets are trading bitcoin versus other cryptocurrencies. During the most recent bear market, USDT (US dollar tether) has been taking a larger share of trading volumes (Exhibit 13).

US dollar tether is a token that its creators say that for every unit of tether in the market, they back it up with 1 US dollar held in reserves, keeping its market price stable at 1 USD. The coin USDT is not a major funding unit but its increasing use is an interesting development. Over the coming years, we think that market focus could turn increasingly towards cross trades between cryptocurrencies/tokens, which would transact via distributed ledgers only and not via the banking system.

Exhibit 14 shows that, in the past month, half of bitcoin trading on exchanges has been done versus the Japanese yen (JPY), with volumes much higher than those versus the US dollar (USD). The Japanese retail community have long been active participants in the foreign exchange market, particularly via margin accounts. They tend to sell JPY and buy foreign currencies with high yields, leveraged up to 25x. Bitflyer, the largest bitcoin exchange in Japan, offers its clients up to 15x leverage but with volatility that is 10x that of USDJPY. Bitcoin trading volumes versus JPY in January were only around 2% of the margin FX trading account volumes. An appreciating JPY (as we expect) could move some of this margin trading volume onto cryptocurrencies. One risk to watch out for is if the Japanese financial regulator confirms that it will lower the FX trading leverage cap to 10x.

The argument proposed by hard cryptocurrency advocates is that profits accumulated in the cryptocurrency world should be simply left in the system and only reinvested in other tokens or altcoins. The basis for eschewing fiat currency entirely is that the cryptocurrency market is evolving so quickly that it is only a matter of time before digital assets have widespread real-world utility and at that point the declining value of fiat currencies can be foregone completely in favour of accumulating real assets.

That’s a tantalizing argument and no doubt it will have many adherents within the cryptocurrency crowd. From a behavioural perspective it represents the hardcore bulls who will never sell regardless of what the price is.

Bitcoin represents by a proof-of-work blockchain which favoured miners more than anyone else. Ethereum is based on a proof of stake blockchain which favours owners of tokens. Meanwhile the evolution of DAC platforms is a fresh iteration and overcomes the scaling limitations of the previous two popular blockchain formats and is more equitable. For example, Hyundai just closed the ICO on its first cryptocurrency designed specifically to function with internet of things devices and is planned to us a hybrid blockchain based on HDAC technology.

It is for that reason I have compared bitcoin to Netscape. It was the early runner but it is unlikely to be able to iterate quickly enough to keep up with the pace of innovation elsewhere in the cryptocurrency field. 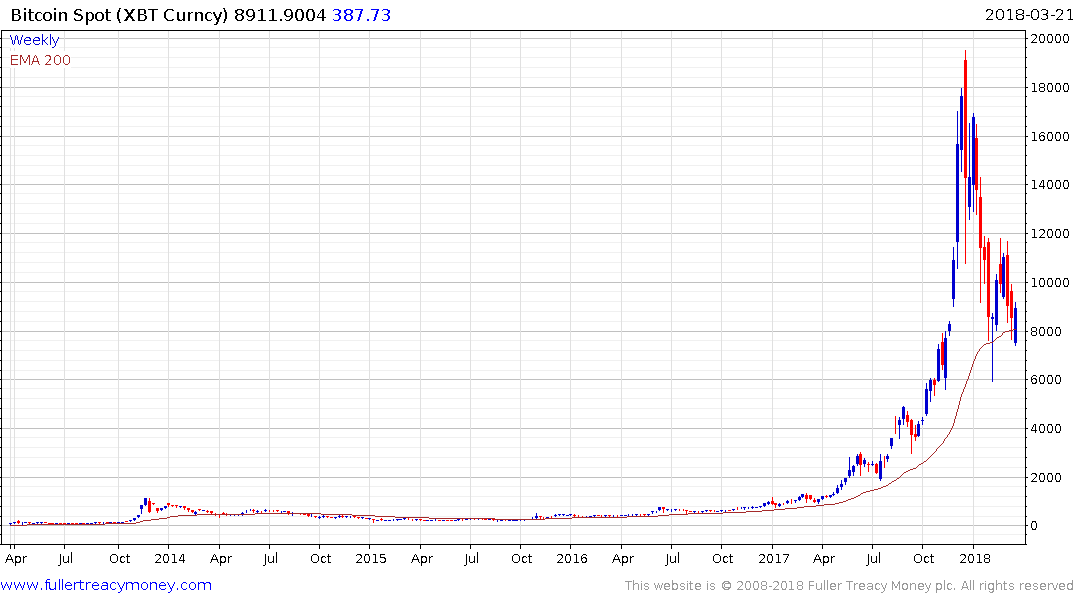 Bitcoin has at least stabilized in the region of the trend mean and will need to hold the low near $7500 if support building is to continue to be given the benefit of the doubt.