First, persistent concerns about the failure of American and European growth to “lift off” – including last week’s sluggish first quarter eurozone data – have been amplified in recent weeks by spreading worries about “lowflation”. That is, inflation that is too low for too long and, as a result, risks pulling the rug from underneath inflationary expectations.

Perhaps nothing serves to signal such concerns more loudly than indications by the traditionally inflation-paranoid German Bundesbank that it would support the European Central Bank venturing deeper into unconventional monetary policy to counter lowflation.

Deflation threat
Second, central banks have signalled continued willingness to repress interest rates longer in order to stimulate growth and reduce the threat of deflation. The ECB is expected to introduce a new range of stimulus measures when its governing council next meets on June 5. Mark Carney, governor of the Bank of England, reiterated last week that he is in no rush to raise interest rates notwithstanding concerns about a booming housing market.

Meanwhile, across the Atlantic, while the Federal Reserve is phasing out its monthly asset purchases, officials are strengthening their forward policy guidance that seeks to keep interest rates abnormally low for an even longer period.

?Third, market positioning has turbocharged economic and policy factors. Few traders were ready for lower interest rates, let alone a flatter yield curve. As such, the recent yield moves have triggered market stops, forcing them to buy bonds to limit their mounting losses. Meanwhile, the lower the interest rates, the harder it has become for some long-term institutional investors to remain underweight bonds given the longer-dated nature of their liabilities.

These represent some plausible answers for why government bond prices have rallied en masse over the last couple of weeks. A number of institutional market participants have voiced the opinion that it will be a very long time indeed before the Fed raises interest rates from the zero bound. That certainly helps to justify recent demand for long-dated bonds buy how sustainable is this? 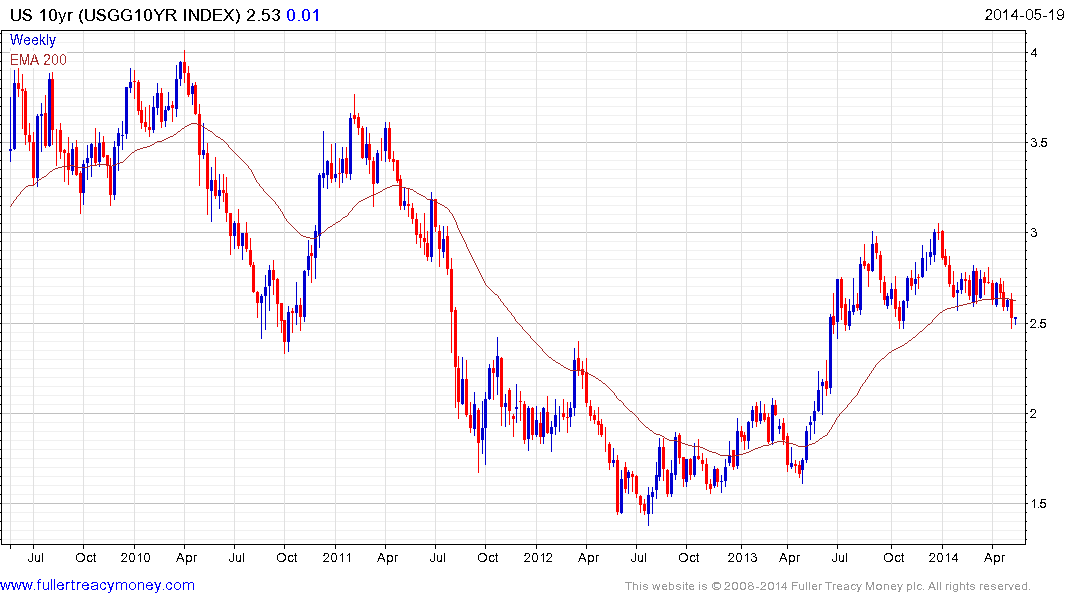 This demand has resulted in the yield curve becoming progressively flatter which means that the difference between short dated and long-dated yields is decreasing. However I wonder how much is to be gained by becoming progressively more bullish on bonds following what has already been an impressive move. Rather than anticipate economic problems, some evidence of slowing US growth will be required to justify additional yield compression in what is already a short-term overbought condition on the futures contracts.