More positively though, in terms of capital investments, the flow of FDI into Africa recovered in 2016 after a dip in 2015. During 2016, capital investment into Africa rose 31.9%. Investment per project averaged US$139m, against US$92.5m in 2015. This surge was driven by several large, capital intensive projects in the real estate, hospitality and construction (RHC), and transport and logistics sectors. The continent’s share of global FDI capital flows increased to 11.4%, up from 9.4% in 2015. That made Africa the second fastest growing destination when measured by FDI capital.

This somewhat mixed picture is not surprising to us. We believe that investor sentiment toward Africa is likely to remain somewhat softer over the next few years. From our point of view, this has far less to do with Africa’s fundamentals than it does with a world characterized by heightened geopolitical uncertainty and greater risk aversion. Companies already doing business in Africa will continue to invest, but will probably exercise a greater degree of caution and be more discerning. We are still of the opinion that any shorter-term shifts in FDI levels will be cyclical rather than structural. We also anticipate that the evolution of FDI — increasing diversification in terms of sources, destinations and sectors — will continue. Over the longer term, as economic recovery slowly gathers pace and as many African economies continue to mature, we also anticipate that levels of FDI will remain robust and will continue to grow.

Africa is a massive continent which for all practical purposes is undeveloped. It is also going to represent the bulk of population growth and the most attractive demographics over the next 30 years so there is a logical explanation for why FDI is flowing towards countries with improving governance and/or abundant mineral wealth.

Even though commodity investment has decreased within the total of what foreigners are spending in Africa the complex continues to represent a significant source of income for the respective countries.

The Continuous Commodity Index (Old CRB) broke down to new reaction lows this week, and is being led lower by food and energy prices. A clear upward dynamic will be required to check the slide and signal support has been found in the psychological 400 level. 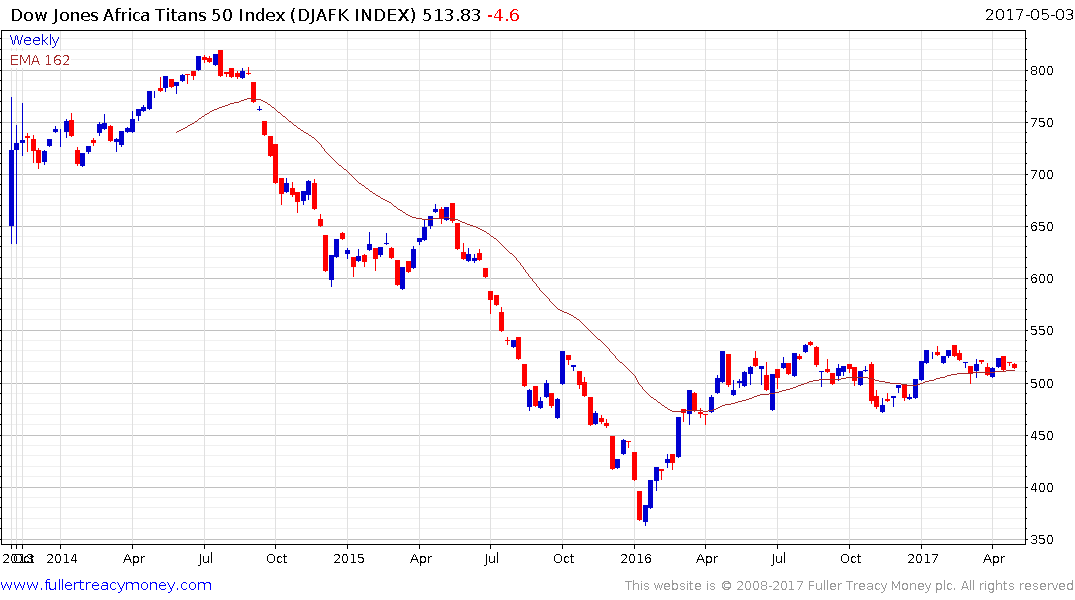 The Dow Jones Africa Titans 50 Index has been ranging around 500 for a year but will need to sustain a move above 550 to reaffirm demand dominance. 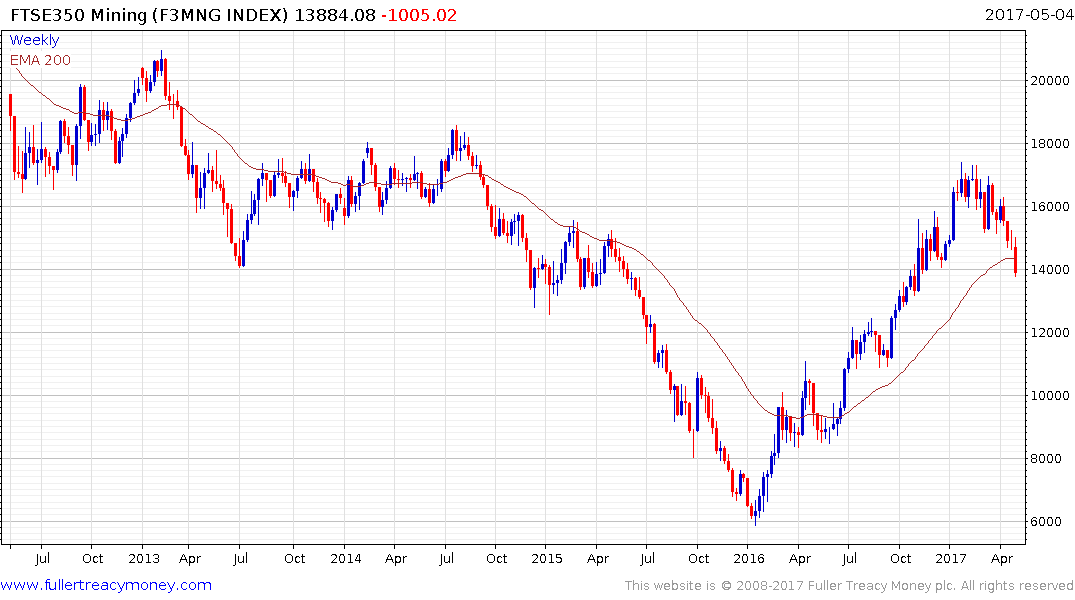 The FTSE-350 Mining Index has fallen to break its more than yearlong progression of higher reaction lows; to test the region of the trend mean. If support is to be found then a clear upward dynamic will be required to signal support is returning in this area.

The S&P/ASX Resources Index has a similar pattern.

The danger for mining equities, if they fail to find support soon, is that last year’s powerful uptrend gives way to a much more volatile trading environment which could result in the above indices ranging for the lengthy medium-term.