Huarong’s bailout was reassuring for investors who went through months of agony guessing just how determined the Chinese government was in combating moral hazard. But even with $300 billion in liabilities that could roil banks, suppliers and home buyers, junk-rated Evergrande is seen as a separate case as authorities crack down on excessive leverage in the property sector.

Investor concerns grew Thursday evening after Chinese regulators demanded Evergrande resolve its debt risks and refrain from spreading untrue information. People’s Bank of China and banking watchdog officials summoned the company’s executives, telling them to maintain operations and protect the stability of financial and property markets, according to a joint statement.

“The Chinese government’s stance to prioritize social harmony and equality over corporate profit is becoming increasingly clear,” said Anthony Leung, head of fixed income at Metropoly Capital HK. “Evergrande is completely different in the sense that it is the poster child of an industrywide reckless risk-taking culture.”

China Evergrande has been investing in a wide number of non-core businesses for years and will likely be forced to sell all of its appreciated assets in order to avoid bankruptcy. That position as a forced seller leaves it in a weak position to get fair value. Therefore, the only conclusion is the company’s management are been punished for taking on excessive leverage and favoured companies will have the opportunity to pick up renewable energy, batter manufacturing and other positions at a discount. 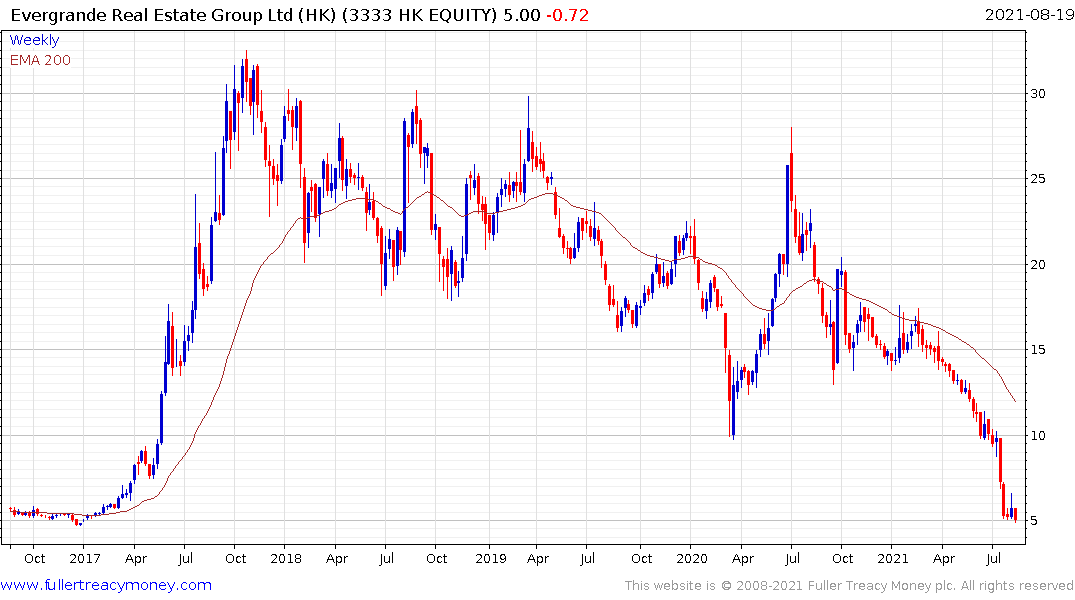 The share continues to test the lows near HK$5. While the trouble the company is experiencing is very grave, the bigger issue is property developer business models are under threat. The sector is being starved of avenues for raising capital and that is a problem which will not be easily addressed. 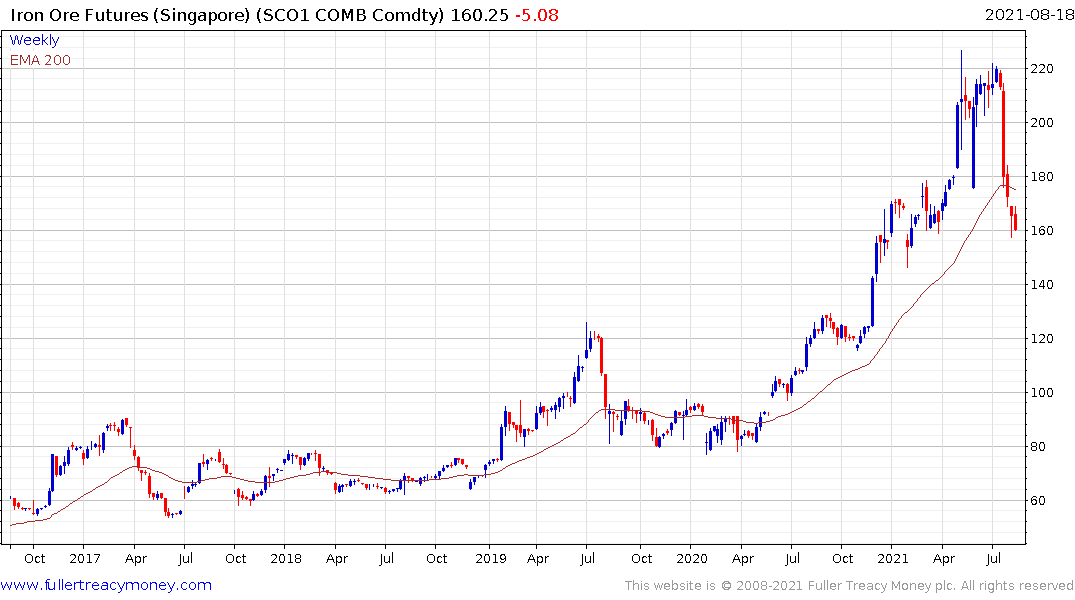 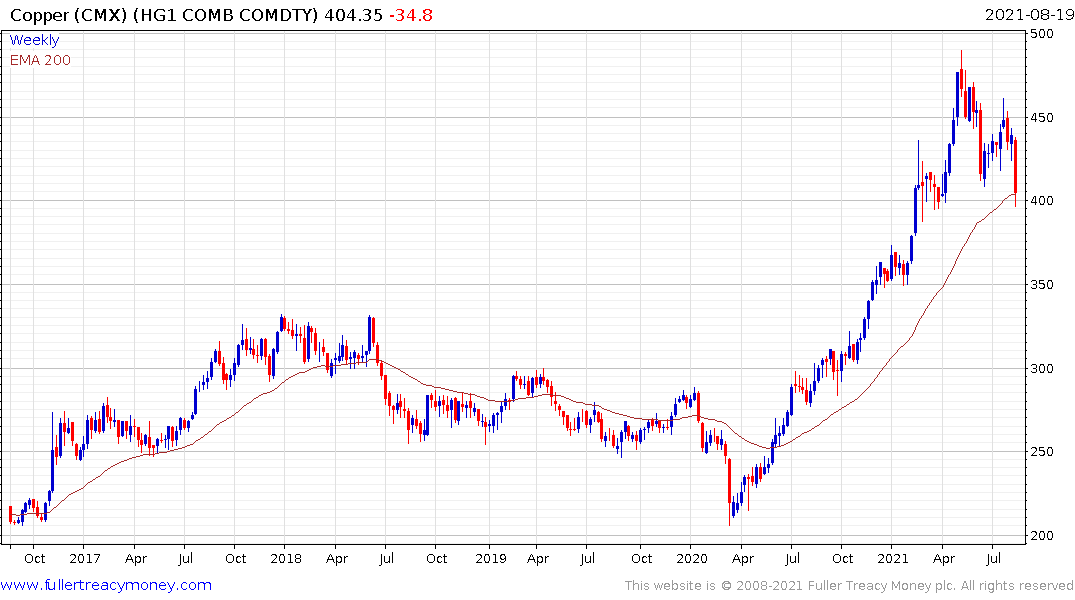 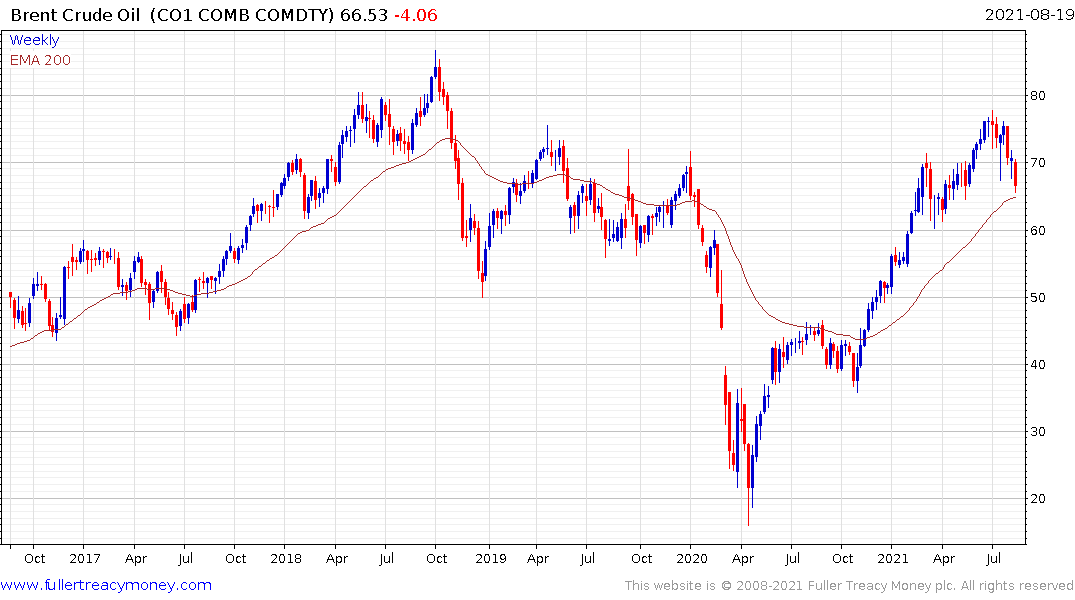 Efforts to curb excessive steel production are also weighing on the iron-ore price. Copper and oil are now also back testing areas of potential support in the region of their respective trend means.

I find myself testing hypotheses to try and figure out in what way the global tapestry of market interactions will be weaved as we work through the pandemic. The clearest conclusion so far is the pandemic has been an accelerant. What if that also means China’s slowdown is a precursor to a hard landing?

It has been well documented that much of the growth over the last decade has been built on leverage. If that cycle is now over, it could have far-reaching global consequences of the black swan variety. Therefore, what is happening China and how the looming wave of debt issues are resolved will be important to monitor for everyone.