The theme of “little conviction” in gold has continued and the market is clearly waiting for an event that will see prices break out of the USD1,270-1,320/oz range of the past 6 weeks. China will be a key market to watch as a mild retracement in USD/CNY over the past fortnight (from a high of 6.26 to 6.23) has helped to improve the Shanghai-London gold premium. However, at less than USD3.0/oz, this is not enough to stoke a response that would be supportive of prices in our view. India remains at the forefront, with hopes high that the expected incoming government will relax import restrictions on gold. On the downside, further ETF selling continues to pressure gold as holdings have declined by 48 metric tonnes (mt) since March, more than unwinding the gain of 34mt that had been made this year. In this environment, it is difficult to see gold sustaining any significant gains and our bias is that the eventual break-out of the range will be to the downside.

Positioning in Comex gold has seen speculative gross shorts unchanged for three weeks and longs are quick to take profit on rallies. Implied volatility in the options market remains near 12-month lows, but likely to spike when the awaited rangebreak occurs. The ANZ Physical Demand Barometer for China has reached a level inline with the trough over the past 12 months, and could be in store for a rebound, but not while the Shanghai-London premium remains depressed. Meanwhile, the continuing tensions between Russia and Ukraine warrant monitoring, but the market reaction to new headlines is waning.

Investment demand has come to represent a powerful marginal buyer of gold over the course of the bull market from the early 2000s. While both China and India represent demand growth drivers, total ETF holdings went from nothing in 2000 to the fifth largest holdings by 2011. The decline in ETF positions represented a significant headwind to prices last year even as physical demand remained high. 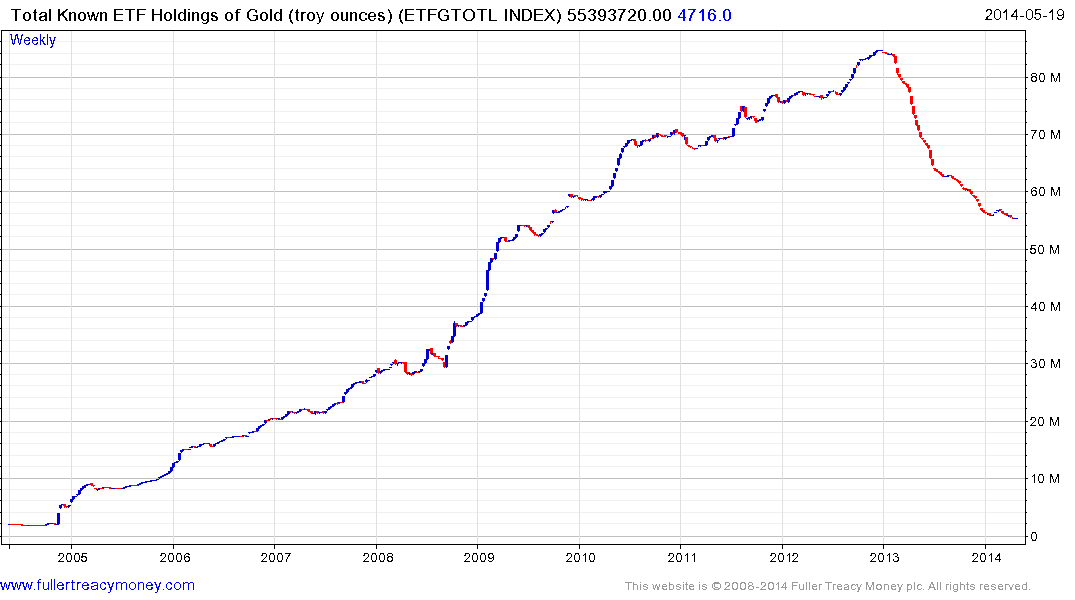 The pace of the decline in ETF holdings moderated from January but the progression of lower rally highs remains intact and the Index moved to a new low in April. A sustained move above 57 million ounces would be required to indicate a return to demand dominance beyond the short term. Against this background, the bullish case for gold is likely to be more reliant on Indian and Chinese demand drivers than might otherwise have been the case.