Europe wants to lead the global fight against climate change to become the world’s first net-zero emissions continent by 2050 under its Green Deal. To reach the goal, it will need to overhaul every corner of its economy, with reducing greenhouse gases in transport and industry being the biggest challenges.

The EU executive will next week propose strengthening and expanding its carbon market, revising energy taxation rules to discourage the use of fossil fuels and imposing the world’s first climate levy on certain emissions-intensive goods brought into the region. The Fit for 55 package will also include more ambitious climate targets for member states in areas not covered by the carbon market.

The revised renewable energy law will set targets for the use of sustainable fuels in transport, heating and cooling, buildings and industry. To help the massive roll-out of electric vehicles, a regulation on alternative fuels will require member states to ensure electric charging points are installed every 60 kilometers (37 miles) on major highways. Hydrogen refueling points would have to be available at the maximum interval of 150 kilometers.

The USA is now energy independent in practice which is a significant economic advantage relative to Europe. That has resulted in a growing disinterest in ensuring global energy security which increases costs to Europe. At the same time the bloc’s industrial base is under threat from China’s continued development; with the risk of the historic trade surplus reversing. That’s particularly true of the automotive sector. This evolving situation has also sharpened focus on China’s ambitions for global economic domination.

So how does Europe evolve enough to compete? Their answer is to become leaders in the fight against carbon emissions. By pioneering an electric transportation and recharging fleet they resolve the energy independence question. By taxing carbon, both at home and from the source of imports, they protect domestic manufacturing and create an environment which forces exporters to abide by their rules. The fiscal austerity of the last decade was a mistake but that’s a difficult thing for politicians to admit. Providing a guise to allow trillions of Euro to be spent in an economic revitalisation program is a recipe for boosting domestic growth and avoiding a debt deflation for at least the next decade.

This is the geopolitical equivalent of a bait and switch program. By overlaying the morally acceptable mantle of “saving the world” and “saving humanity from itself”, any set of policies can be justified. If anyone were thinking about what happened to the global reflation trade, Europe has the answer. 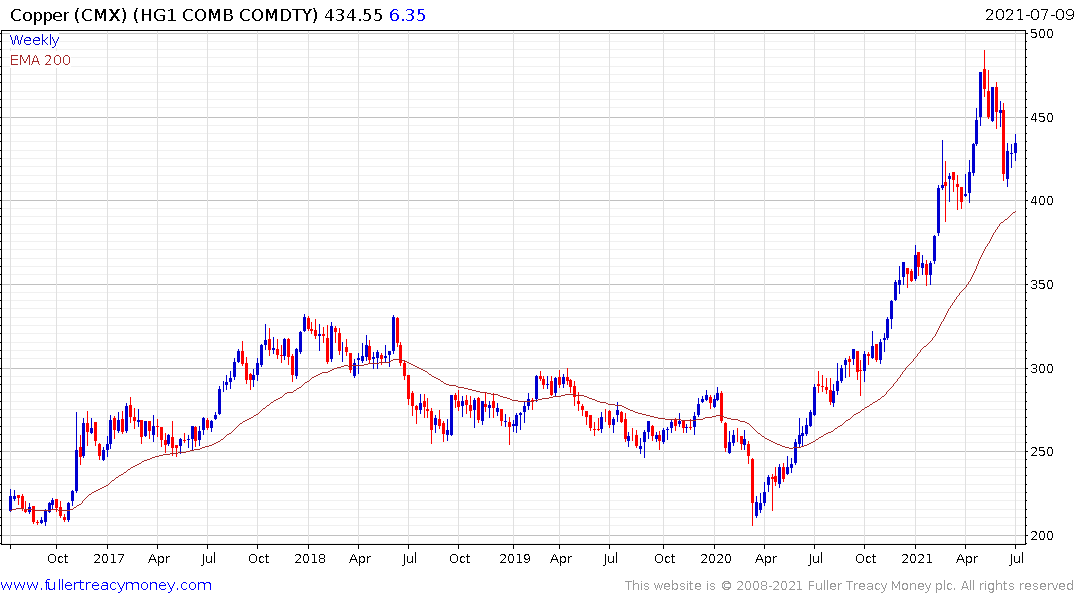 Copper continues to steady in the region of the all-time highs and a sequence of higher reaction lows remains in place. 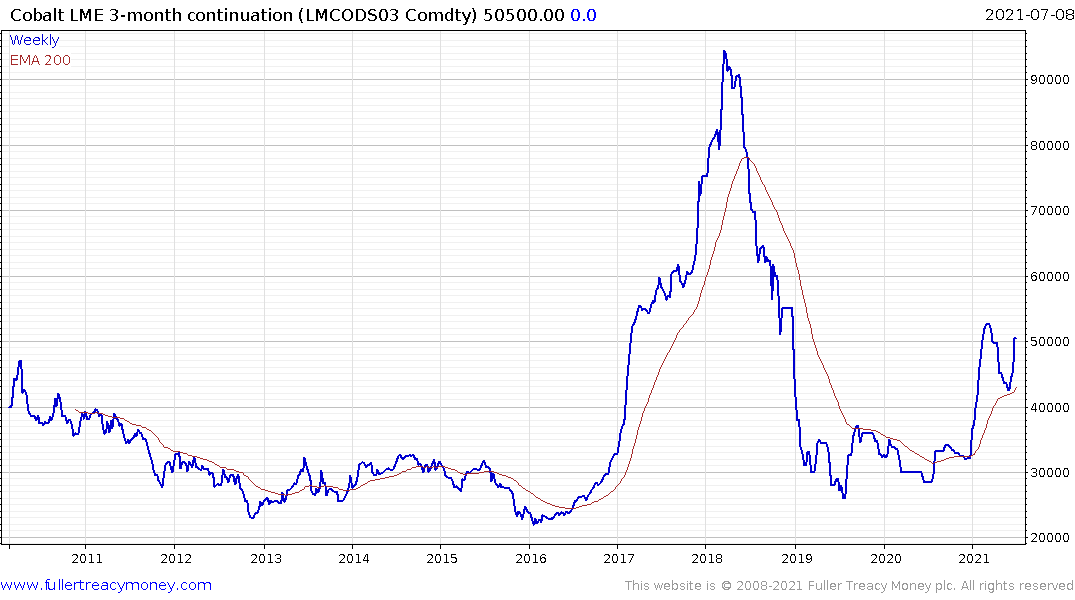 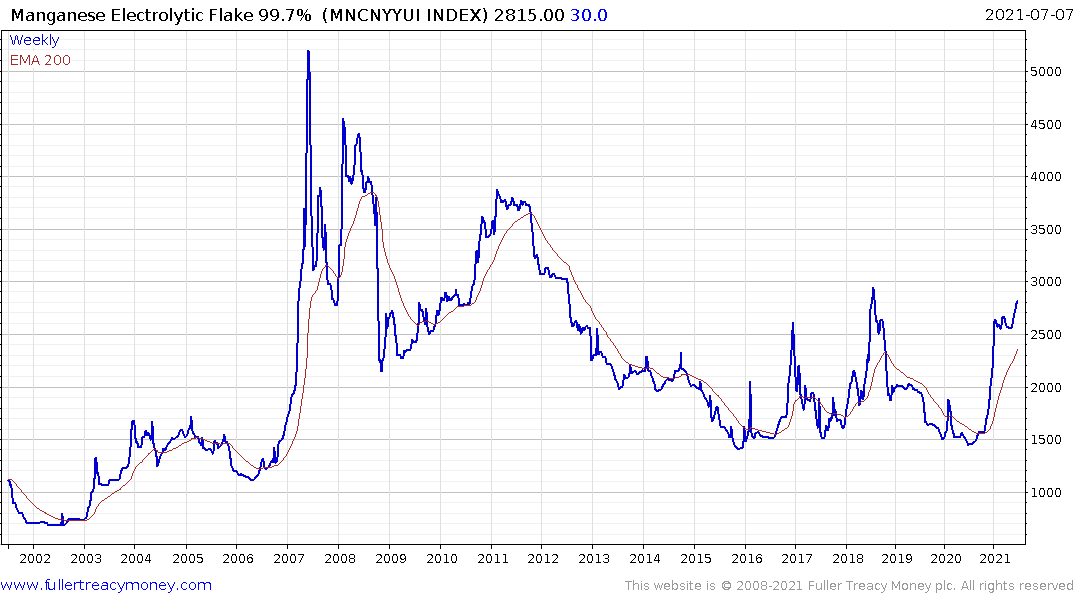 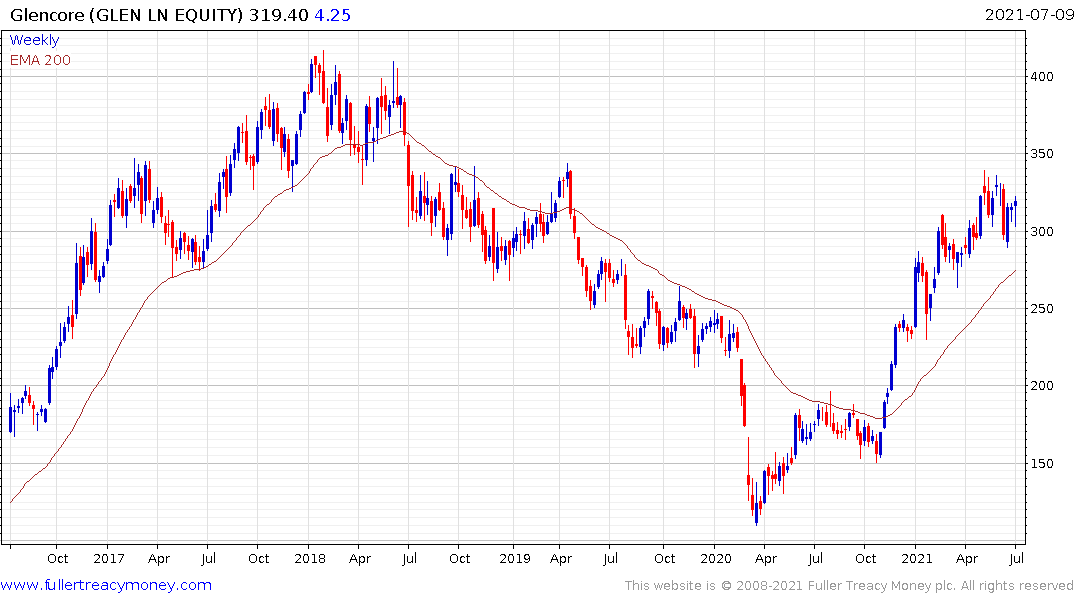 Glencore continues to trend higher in a reasonably consistent manner. 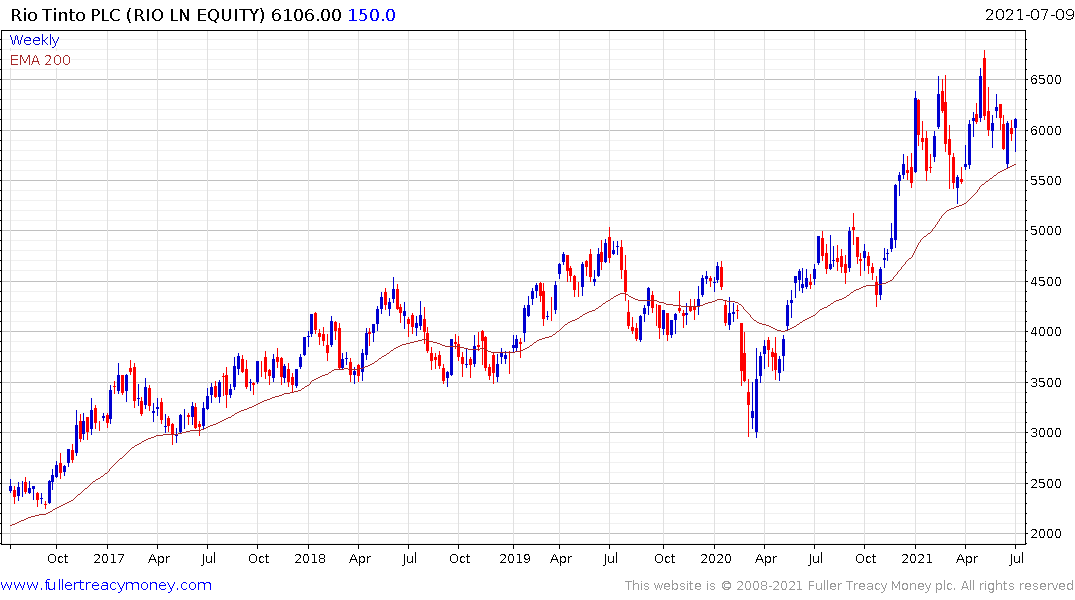 Rio Tinto is currently firming from the region of the trend mean. The company is also benefitting from China’s preference for aluminium in electric cables.

Euro Manganese is active in Europe but headquartered in Canada. The share is currently consolidating in the region of the trend mean.

The ECB’s Pandemic Emerging Purchase Program is up to a total of €1.18 trillion and shows no signs of stopping. That fund is aimed at keeping yields low. Just of successful that effort will be depends entirely on inflationary expectations.

The challenge is that million-mile batteries are promised but have not been delivered. Solar cells and wind turbines have shorter replacement horizons than conventional electricity generation and are limited by intermittency. Battery prices are falling but represent significant additional costs. Hydrogen is a completely new sector which will require massive investment if its promise is to be realised. All of these plans rely on both taxing carbon and low interest rates to fund the investment.

Even as Europe attempts to claim the title of green energy king, China has already developed a significant lead. They dominate production of solar cells and are increasingly dominant in battery production as well.

This story detailing how the CEO of CATL is now wealthier than Jack Ma highlights the benefits of promoting sectors that align with the Party’s medium-term strategic objectives.