Europe's Dirty Money Was Flagged for Years, But Little Happened
Comment of the Day

Europe's Dirty Money Was Flagged for Years, But Little Happened by Eoin Treacy

“More centralized money laundering controls and systems probably makes sense in the euro zone,” said Howard Davies, the chairman of Royal Bank of Scotland Group Plc, which was pulled into the scandal this week. “I suspect in 3 to 4 years there will be a euro-zone anti-money-laundering regulator.”

With a financial system barely recovered from a decade of serial crises, policy makers in European capitals need to strike a balance between tightening the screws on their own lenders and keeping banks on the road to sustainable profitability.

Financial institutions from Stockholm to Amsterdam face uncomfortable questions about their handling of tainted funds, with investigations under way in the Baltic nations, the U.S., the U.K. and the Nordic countries. Almost daily revelations suggest there are more surprises to come on the misconduct.

“It’s a big paradox that you have one single market with free movement for capital and services and so on, but you have 28 different anti-money laundering systems," said Jeppe Kofod, a Danish lawmaker in the European Parliament who helped in a year-long effort to investigate tax evasion and financial crime. “The financial sector is so interconnected and so transnational, it doesn’t make sense to have this kind of fragmented system.”

When I worked at Bloomberg in the early 2000s my beat was Belgium and Luxembourg. Back then it was normal to have a money counting machine in every client meeting room. Every August in Luxembourg, there would be a line of camper vans queuing on the road in from Germany, with people stopping off at their respective private bank to pick up cash for their holiday by the Mediterranean.

The simple fact is that cash is highly prized in Europe because the national past time in many countries is tax evasion. There are obviously clear arguments about the value of cash as an asset in an era when investors are increasingly leery of governments acquisitive intentions with such high debt loads. However, that only enforces the conclusion, cash is most highly prized by those wishing to shade their wealth from the eyes of government.

Belgium, the Netherlands, Luxembourg, Monaco, Switzerland, Austria, Cyprus, Malta, Gibraltar, Jersey, Guernsey and the Isle of Mann have some of the tightest banking secrecy laws on the continent and their respective sectors have been competing with one another for years. That is another example of a paradox in European regulation. Countries crack down on tax evasion at home but turn a blind eye to tax evasion by the citizens of their neighbouring countries, if it means more business for their banks. It’s not much of a logical leap to facilitate the same services for people outside the EU which is what the current scandal is about.

It seems to me however that a pan Eurozone anti money laundering tsar would be objected to by member governments’ since it would rob their domestic banks of a significant source of capital. https://www.neweurope.eu/article/eu-rejects-commissions-money-laundering-blacklist/ The recent failure of European Commission proposals on blacklisting money laundering centres, not least because of four on the list were US island banking centres, is a clear sign of just how much resistance there is to closing down loopholes. 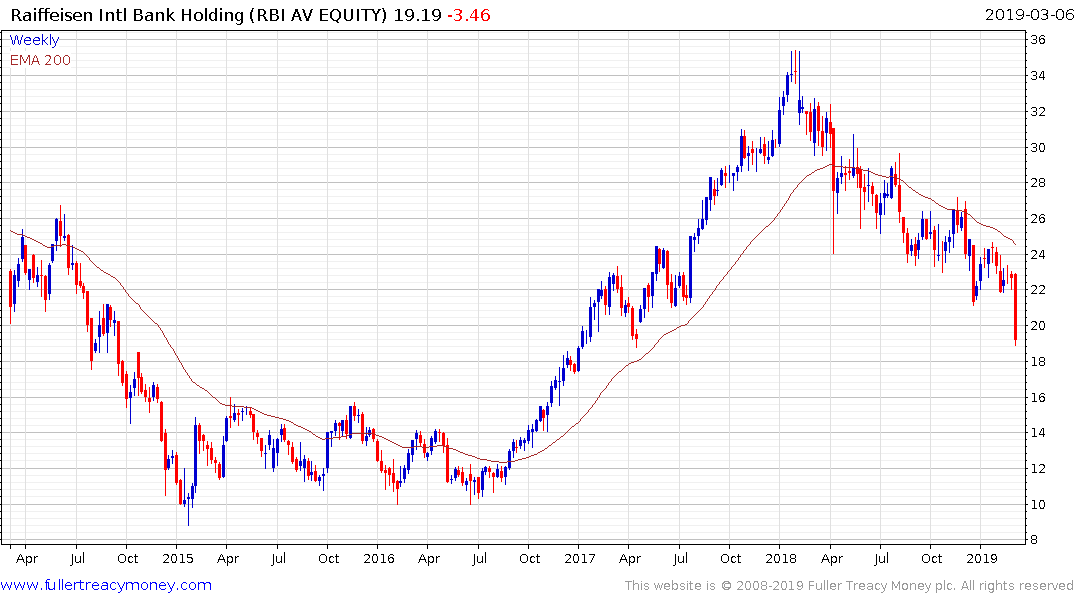 Raiffeisen Bank International has been trending lower for more than a year and a break in the medium-term sequence of lower rally highs would be required to question medium-term scope for continued upside. 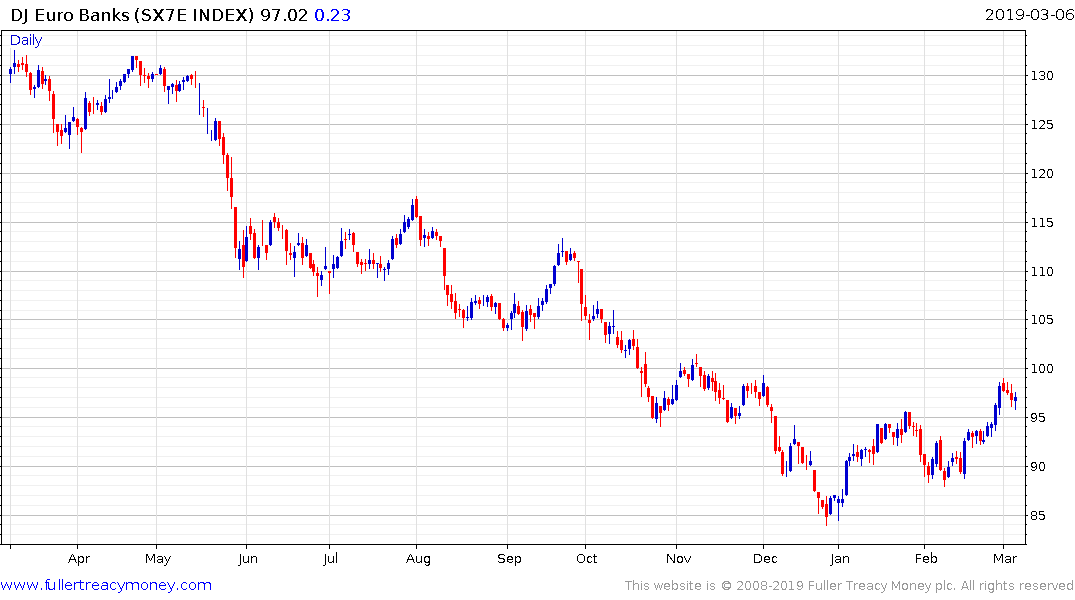 However, while a small number of banks are currently taking the hit from investigations, the wider European sector is bouncing, not least because of perceptions the ECB is readying its own version of QE3.