The euro-area recovery failed to gather momentum last quarter, as France unexpectedly stalled and economies from Italy to the Netherlands shrank.

Growth of just 0.2 percent for the currency bloc, half as much as economists had forecast, adds pressure on the European Central Bank to deliver stimulus measures next month in its battle against weak inflation and anemic output. While German expansion doubled to 0.8 percent, that wasn’t enough to offset renewed weakness across the region, including a 0.7 percent drop in Portugal.

ECB President Mario Draghi primed investors last week for further stimulus in June, saying the 24-member Governing Council is “comfortable with acting” next month. With the euro area’s recovery from a record-long recession still fragile, officials are battling to revive price growth, with the inflation rate at less than half the ECB’s target.

“The recovery is still more or less in train in most countries, but the headline number is disappointing and the horror show was the Dutch number,” said Richard Barwell, an economist at Royal Bank of Scotland Group Plc in London. “We think the ECB is going to act in June, and we think it will be a package of measures.”

The ECB has made clear that they regard US$1.40 against the Euro to be a hurdle they do not wish to see the currency appreciate beyond. The Euro has pulled back from level over the last 10 days and has developed a short-term oversold condition in the process. Some steadying is possible in the short term but $1.40 is likely to be a medium-term resistance point.

Much of the Eurozone is struggling to achieve growth because of a lack of domestic demand. The central bank’s sterilisation of its LTRO program over the last 18 months and the corresponding contraction of its balance sheet is at least a contributory factor. 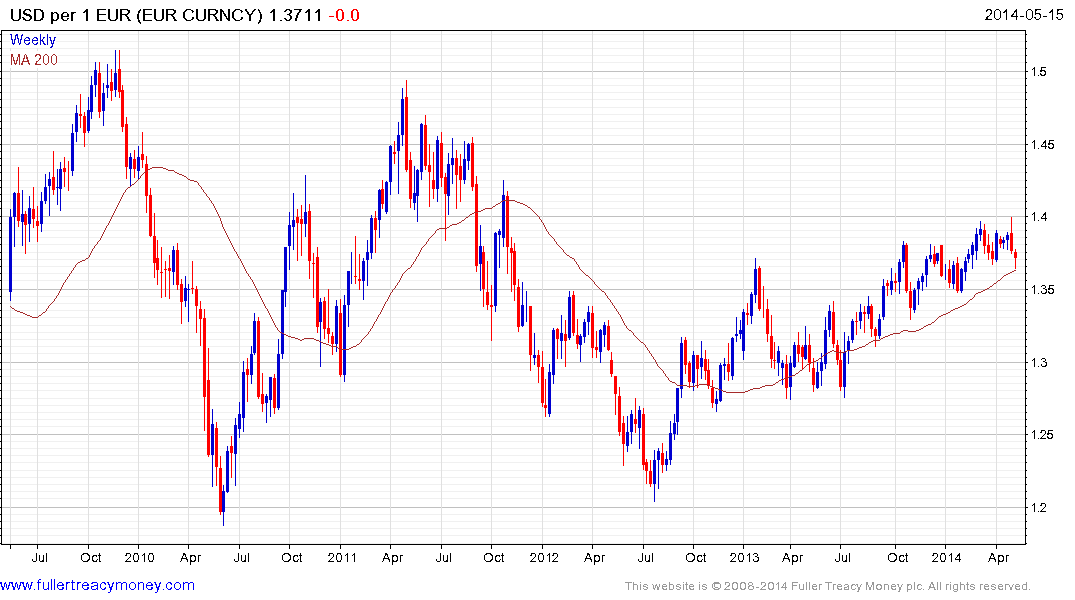 The ECB’s balance sheet appears to have stopped contracting and turned higher last week. This suggests that additional stimulus is likely to be part of the range measures the ECB is expected to announce at its next meeting on June 5th. This may include an interest rate cut but at 0.25% they do not have a great deal of room to cut aggressively. A revival of the bond buying program is also a possibility and would likely to be positive for the region’s stock markets. The bond markets may already be pricing in this possibility.

A much discussed alternative would be to reduce the interest rate the ECB pays banks for deposits to a negative number. This probably sounds good on paper because it would increase the incentive for banks to lend. However since banks are in the midst of repairing their balance sheets and still have considerable bad loans on their books, they are not in a particularly sound position to greatly increase lending. This suggests that if a negative deposit rate is announced it would satisfy political desires to punish the banks but would act as a tax rather than a tailwind. 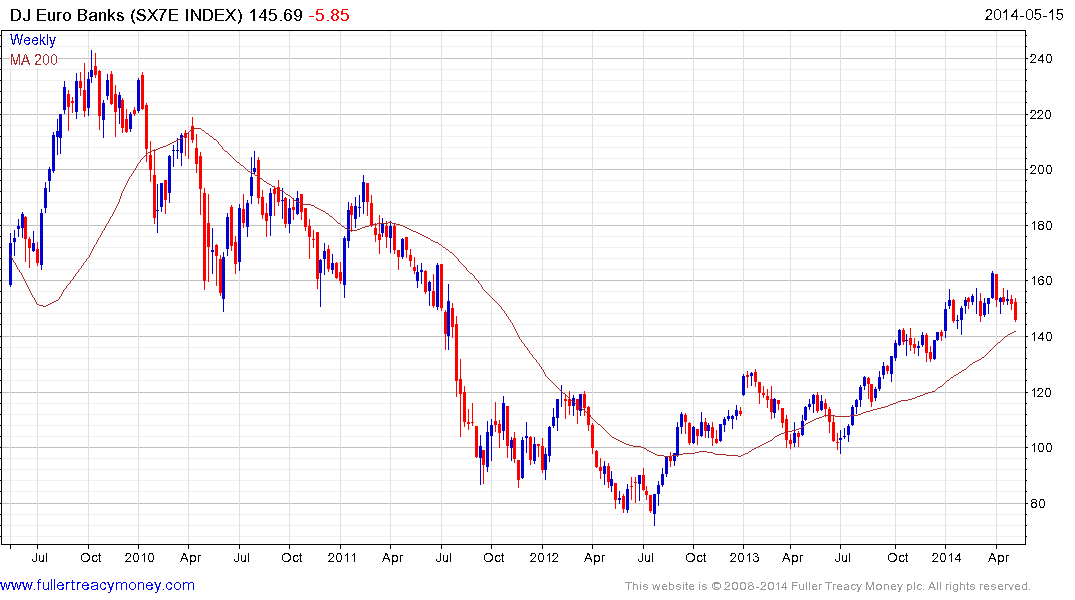 The Euro Stoxx Banks Index extended its recently decline today and is now challenging the region of the 200-day MA. A clear upward dynamic will be required to signal a return to demand dominance in this area.