While the euro-area economy is gradually recovering, with 0.2 percent growth forecast for the fourth-quarter, the currency bloc is still struggling with the legacy of the debt crisis, including an unemployment rate of 12.1 percent in October.

RWE AG, Germany’s second-largest utility, said on Nov. 14 that profit next year will almost halve on the weak outlook for power prices, and that it plans to cut about 10 percent of its jobs.

Car sales provide evidence of the pick-up in manufacturing, rising in October for a second month for the first time since 2011. November data for European car sales are due tomorrow.

Part of this trend, Hyundai Motor Co., South Korea’s largest automaker, is targeting sales gains in Europe next year as a new version of the i10 small car adds to a regional car-market revival. Allan Rushforth, chief operating officer of
Hyundai’s Europe division, said on Dec. 10 that there were “a number of new opportunities” for 2014.

“Europe seems to be turning the corner,” the IMF’s Managing Director Christine Lagarde said on Dec. 10. The International Monetary Fund forecasts growth of 1 percent for the euro area next year.

While economies with large commodity bases such as Canada and Australia face competition between their healthy resources’ sectors and the competitiveness of their manufacturing, Europe faces a different challenge with the ECB balancing the needs of the core’s strong export sector with the challenges faced by the periphery and its debt issues.

There is an additional consideration in that the ECB, under Mario Draghi, is unlikely to begin reining in its accommodative monetary policy before the Fed. In fact given the reliance of the banking sector on the multiplying of leverage source from open swap lines between the Fed and the ECB, the latter may yet have to pick up the slack from any Fed tapering that may occur. 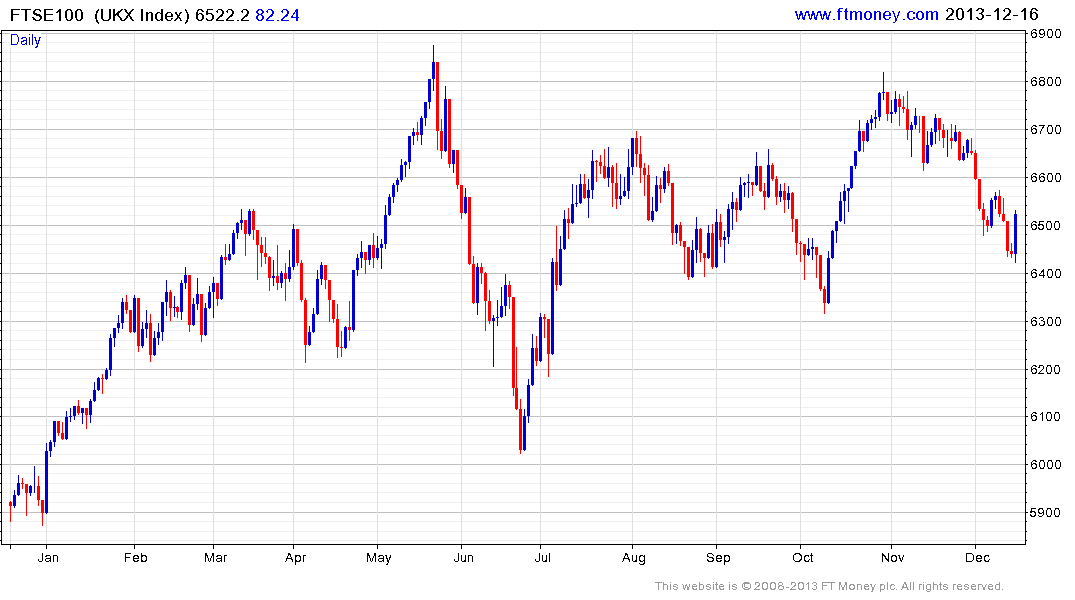 Against the background of improving manufacturing figures, the CAC and FTSE-100 posted upside key day reversals today, suggesting lows of at least near-term significance. Countermanding downward dynamics would be required to check potential for further rebounds.