Most of the downgrades were less severe than in the previous report in February, apart from Germany, where the 2019 prediction was slashed to just 0.5 percent from 1.1 percent. Officials in Brussels warned that downside risks to the region’s outlook remain “prominent.”

The forecasts reflect more pronounced weakness in the region, which has stumbled due to a slowdown in the global economy, unresolved trade disputes and “exceptional weakness” in manufacturing. Meanwhile sentiment has taken a hit from disruptions in the auto industry, social unrest, and uncertainty related to Brexit.

German carmaker BMW said on Tuesday that the economic backdrop is “increasingly challenging” and business conditions are “expected to remain volatile.”

“As initial deadlines for U.S.-China trade negotiations and Brexit have passed without resolution, various uncertainties continue to loom large,” the European Commission said in its quarterly report. “An escalation of trade tensions could prove to be a major shock.”

The Eurozone is heavily dependent on international trade and Germany’s persistent surpluses are very much tied to export growth. Trade wars and the continued transition of the automotive supply chain towards battery powered vehicles represent significant challenges to both economic output and employment. 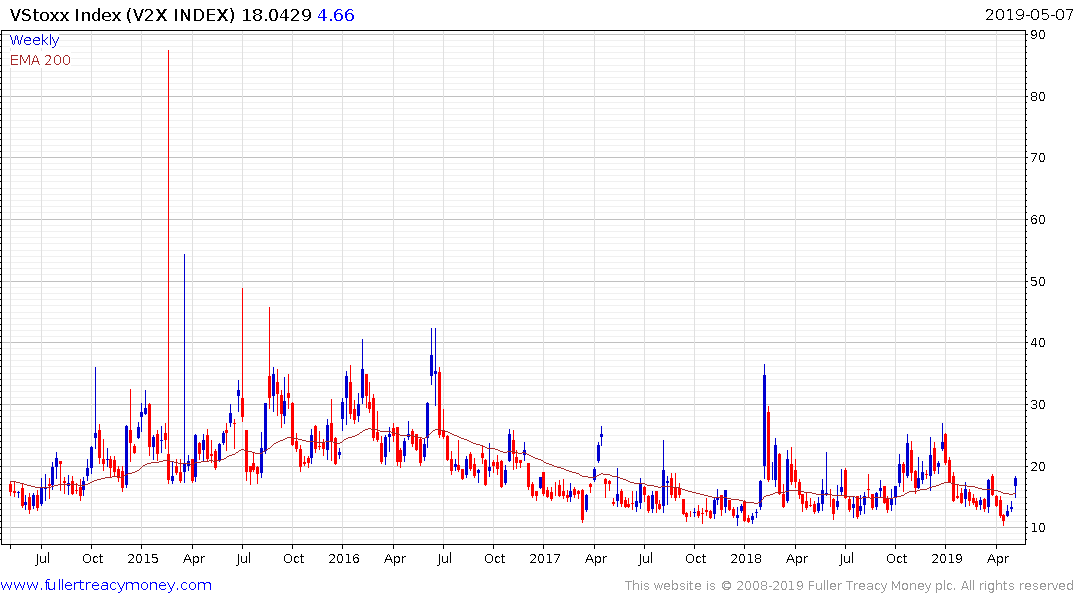 VStoxx volatility has been rising for the last couple of week and is back testing the peak from late March. A clear downward dynamic will now be required to question scope for continued upside. 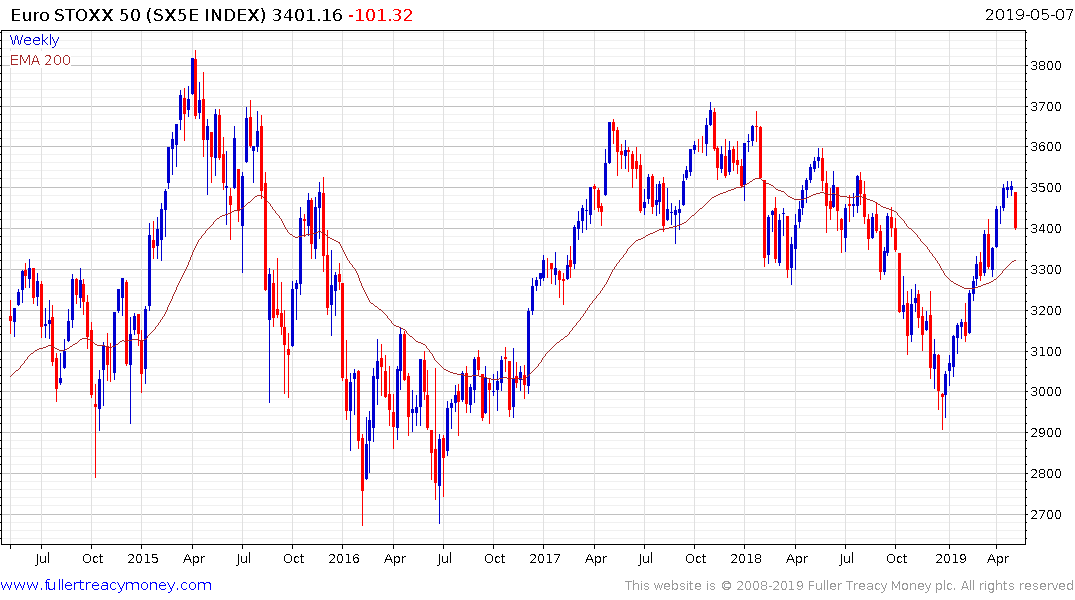 The Euro Stoxx 50 Index has encountered resistance in the region of the June through July peaks and at least process of mean reversion is now unfolding. 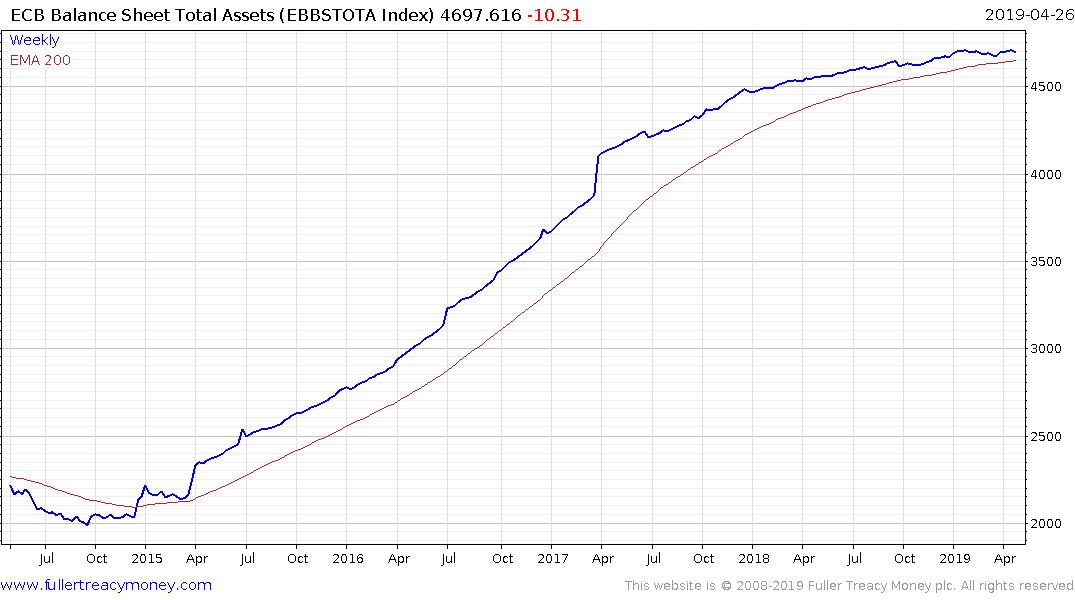 The ECB, having just ended its quantitative easing program will likely wait for evidence of slowing rather than fears of slowing before re-engaging with assistance measures. That suggests some additional weakness will likely be required before a compelling value argument emerges. 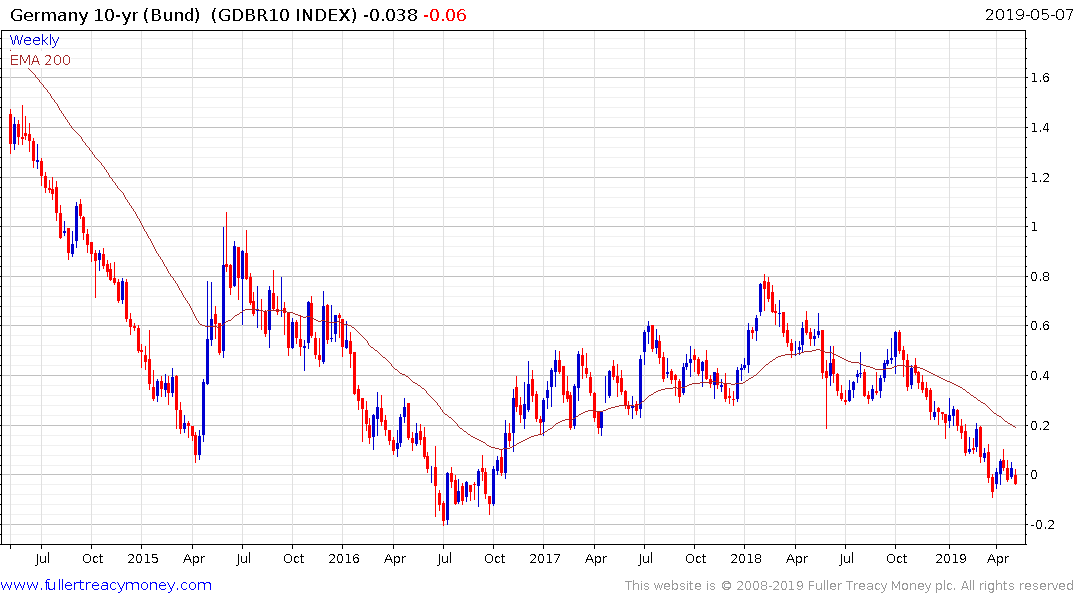 Meanwhile the rally in German debt remains intact with Bund yields dropping back below 0% today. The sequence of lower rally highs, evident since October, will need to be broken, with a sustained move above 0.1% to signal a return to supply dominance.