Equities & The Rise of Inflation: How Much Inflation Before Repression?
Comment of the Day

Equities & The Rise of Inflation: How Much Inflation Before Repression? by Eoin Treacy

It is now probable that deflation will be reported across the developed world. It might also be somewhat irrelevant for investors. If The Solid Ground is correct what has just happened is that the control of the supply of money has permanently left the hands of central bankers - the silent revolution. The supply of money will now be set, for the foreseeable future, by democratically elected politicians seeking re-election. Imagine two economies, identical in every way, expect that in one an independent central bank seeks to control the supply of money while in another a democratically elected government directly determines the supply money through commercial bank balance sheet control.  Would these two economies have the same level of long-term interest rates? The Solid Ground’s answer to that question is that they would not and it because they not that long-term interest rates should now rise - even if the near-term outlook is for deflation. The 2Q 2020 report (The Birth of the Age of Inflation: Why It Is Now and What to Own) shows just how government have seized control of money creation and thus your analyst believes that financial markets will soon be pricing in this silent revolution long before the inevitable inflation, governments so crave, has actually been created.

The regulatory environment where new taxes are created to justify vanity projects is so common it is no longer attracts interest. All of these measures have resulted in lower living standards for many people and now government have retaken control of money supply. It might start out OK but it will not end well. The reality is you cannot fix a debt problem with more debt but that doesn’t stop them from trying. 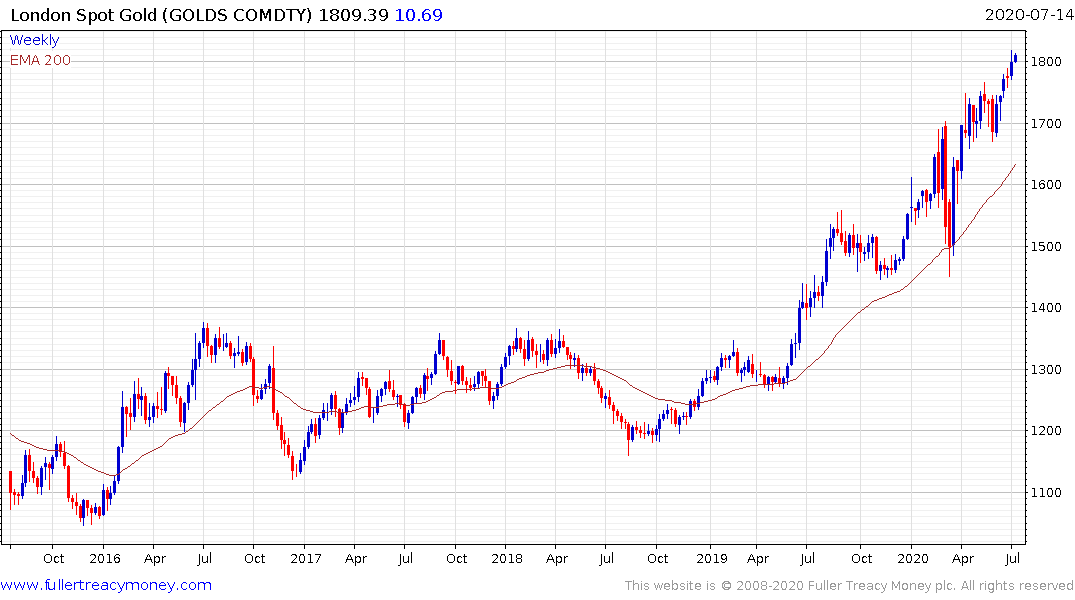 The continued strength in the precious metals sector is the clearest signal investors are taking steps to hedge against this outcome. It’s still early and Treasury yields have not yet begun to response but the outperformance of gold is a signal that investors are worried about financial repression.