Emerging Markets Retake the Lead
Comment of the Day

2018 – a bad year for EMs especially: Following the synchronised upswing in global growth in 2017, the US economy continued to power ahead in 2018 while growth faltered in the rest of the world. However, the pain was a lot more pronounced and persistent for

2019 – a reversal with the US pulling back, EMs pulling ahead: In 2019, we expect this dynamic to reverse. Growth slows in DM and we are below consensus on the US growth outlook. Temporary factors will support DM growth in 4Q18-1Q19 before fading. In 4Q18, we expect a short-term bounce in growth in the euro area and Japan after a temporary disruption (due to changes in emission standards impacting car production and the impact of natural disasters, respectively) in 3Q18. In 1Q19, a record-high tax-refund season boosts consumption growth in the US and supports overall GDP growth. However, we expect DM growth to slow as we move through the year, given tighter labour markets, fading fiscal stimulus (in the US) and also the impact from withdrawal of monetary accommodation. In EMs, growth will hold up relatively well as external headwinds recede. The growth differential will swing back in favour of EMs, which will resume the mantle of growth leadership.

Tough external environment pushed EMs to build up more buffers… As external pressures mounted, most EMs have maintained a prudent and favourable policy mix, keeping macro-stability risks at bay while fostering continued recovery. If anything, the harsher external environment in 2018 actually pushed EMs to build up buffers. Major EMs (save Argentina and Turkey) maintained adequate real interest rate buffers, stayed on a path of fiscal consolidation and kept real wage growth trends broadly in line with real GDP growth. Macro-stability indicators such as inflation and current account deficits have thus remained relatively contained in EM as a whole, with inflation in most EMs not overshooting the central banks’ comfort zone.

…which puts them in a good position as external headwinds ease: A Fed pause and weaker outlook for the US dollar should bring some respite for EM financial conditions and support their growth momentum. In 2019, growth in the US is likely to moderate due to tighter factor markets constraining growth, the fading impact from fiscal measures and the cumulative impact of trailing rate hikes. We also expect the Fed to pause in the rate hike cycle in 3Q19. This backdrop, according to our strategists, will keep the US 10-year bond yield closer to 3% and lead to a weaker dollar. The pressures from higher oil prices should also recede in 2019, contributing to a much more favourable external backdrop for EMs.

Emerging markets have been under the most acute pressure from quantitative tightening not least because of the quantity of US Dollar loans outstanding. The US Dollar has been the key variable in the lack of appetite for emerging market assets. Therefore, any sign of waning demand for the Dollar or increased supply, stemming from a slowing pace of balance sheet run-off would be welcomed by emerging markets. 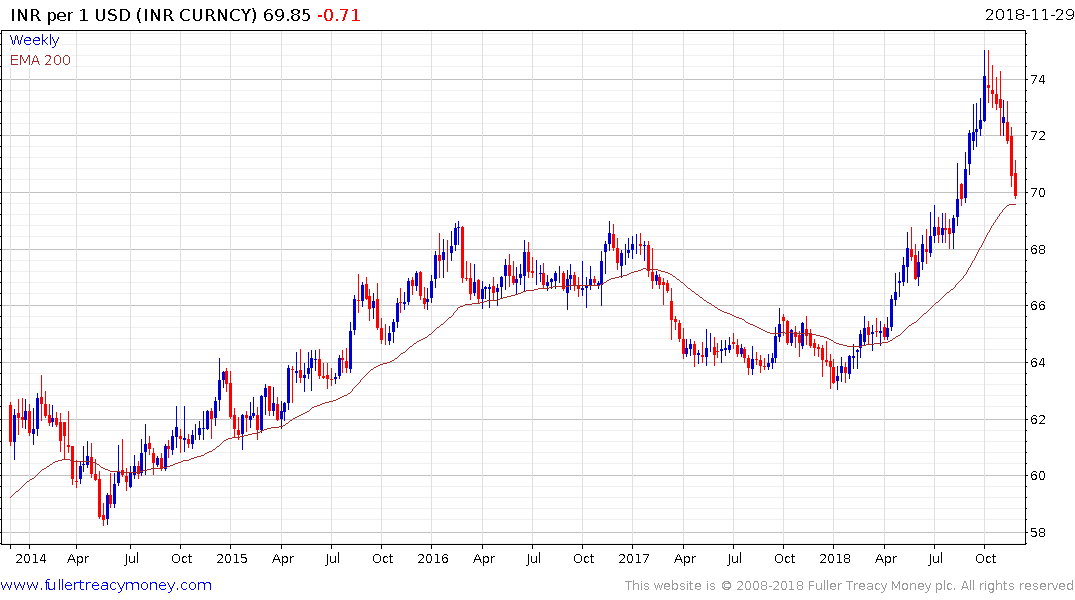 The Indian rupee has now unwound it oversold condition relative to the trend mean and has developed a short-term overbought condition in the process. There is potential for some steadying but a sustained move below INR75 would be required to question medium-term steadying. 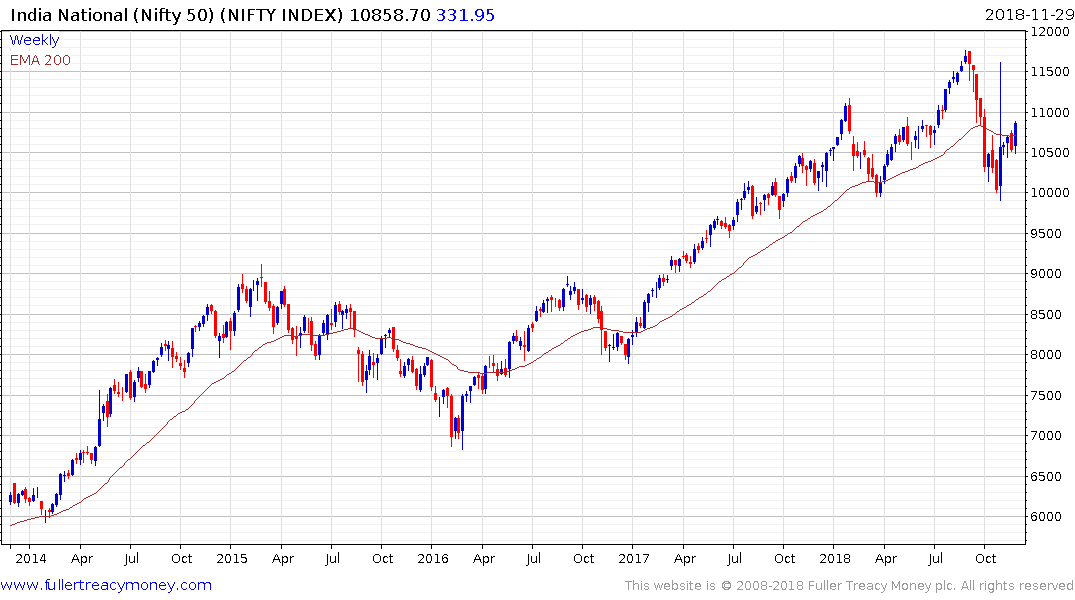 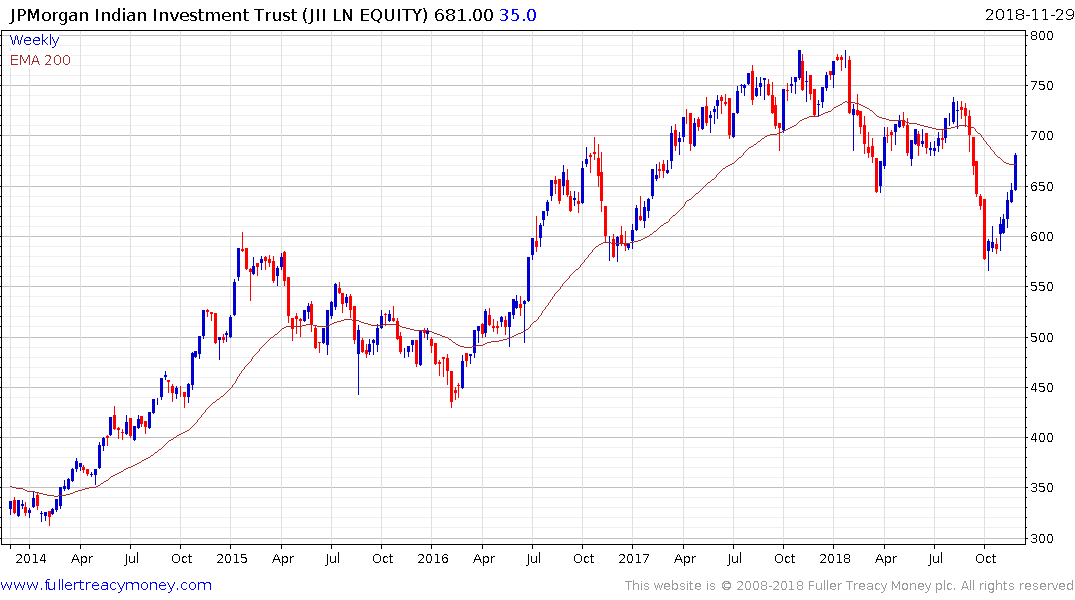 The Nifty Index is benefitting both from the lower oil price and the Rupee’s rebound. It broke back above its trend mean today and a sustained move below 10,000 would be required to question medium-term scope for continued upside. 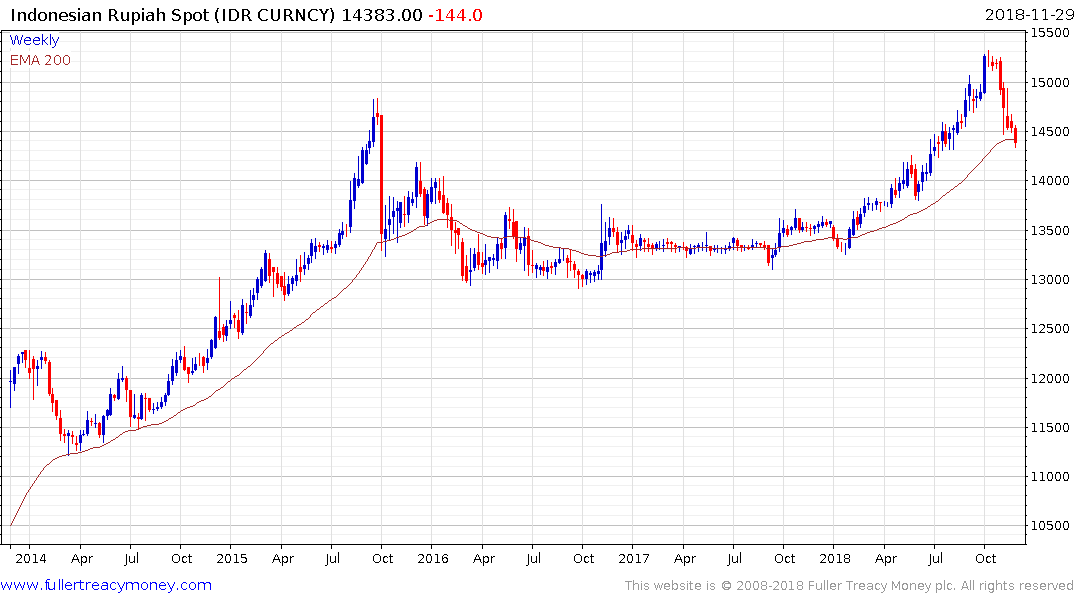 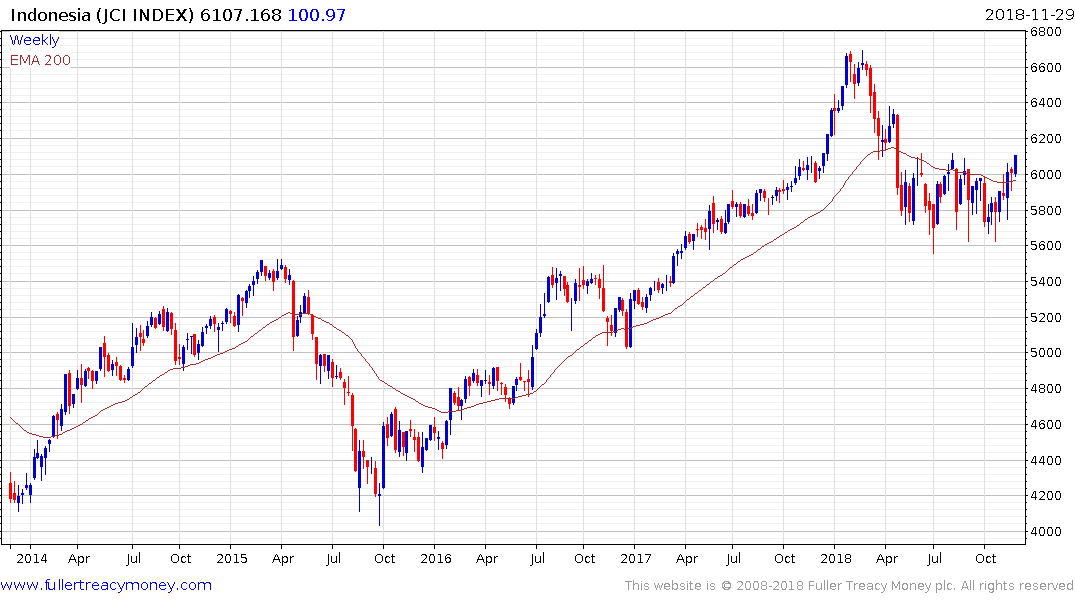 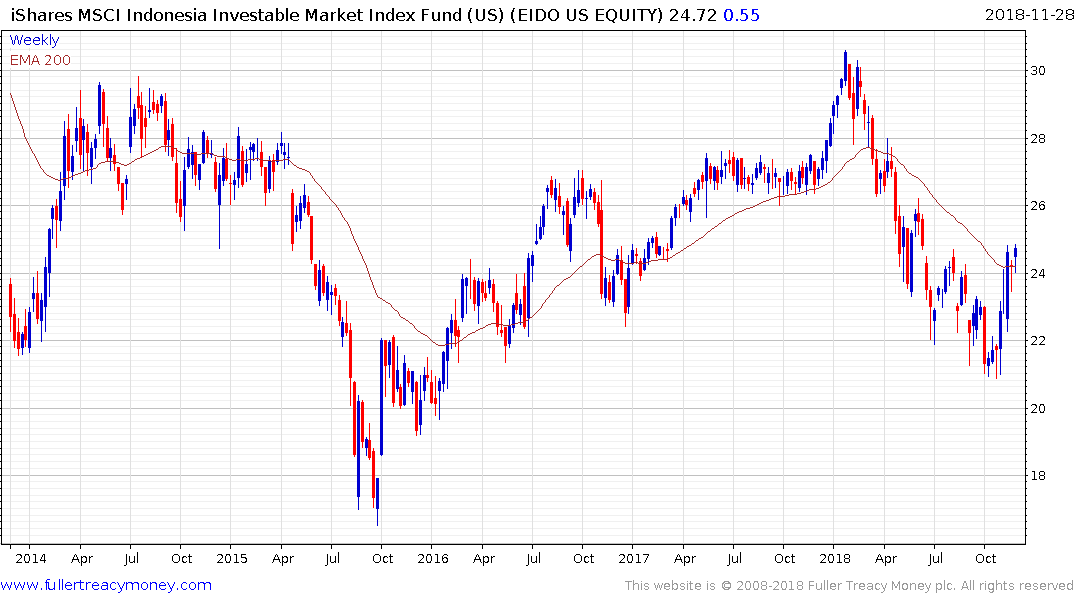 The Indonesia Rupiah has also unwound its overextension relative to the mean and the Jakarta composite Index pushed back above the trend mean this week. 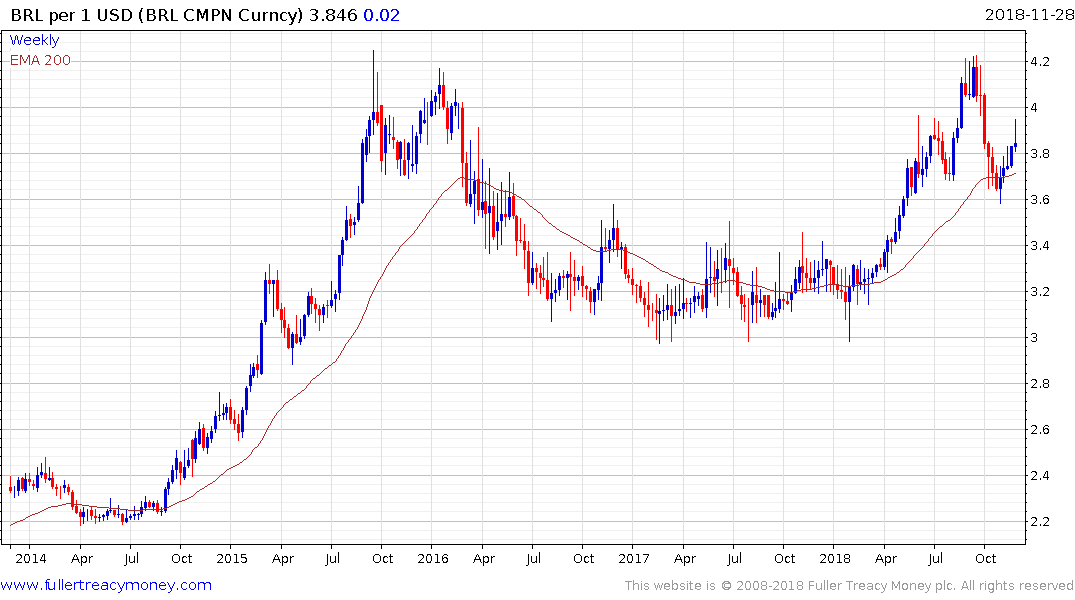 The Brazilian Real potentially gives us an example of what we might expect from currencies that have just now closed their overextensions. The Real has weakened modestly from the region of the trend mean over the last month but steadied this week. 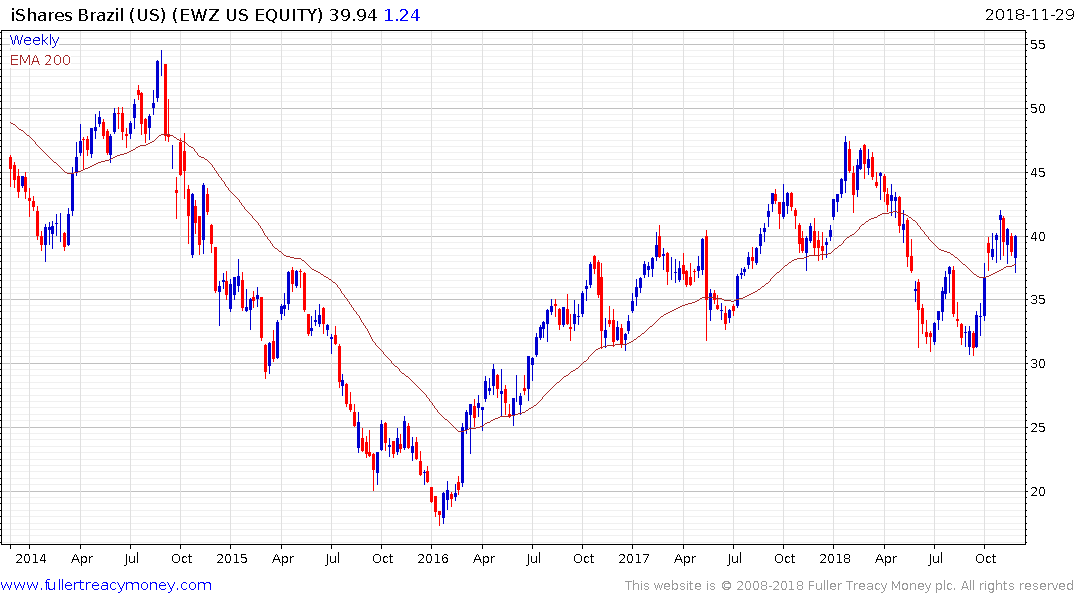 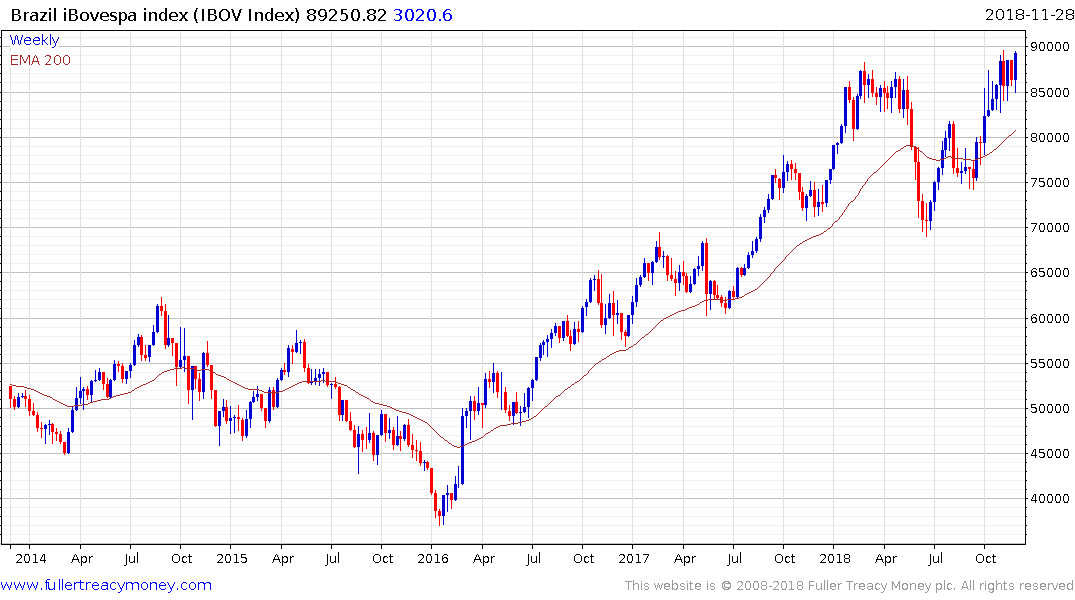 The iBovespa Index broke out to a new all-time high this week and the US Dollar denominated iShares ETF is firming from the region of the trend mean.