Dear Eoin. First of all, thank you for all the great work you do! In a recent email there was a quote that mentioned 10-year Treasuries would decline by 2/3 in value if rates go from 1% to 3%. This is not even close to the correct math. A $1000 bond today selling at a 1% semi-annual yield would be worth $828.31 should rates go to 3%. It is true that a 1% bond has greater convexity than a 4% bond but the differences are not nearly as material as the quote suggests. A 4% par bond moving to 6% would trade at $851.23 which is less than a 3% difference to the fall in value for the 1% bond. Hope this helps, (I disclose that I am an actuary :))

Thank you for this email which highlights an important consideration for bond investors. Your raw bond calculations gel with the bond calculators in Bloomberg I used to discuss the issue in the Big Picture Long-Term video.

Convexity This report from portfoliocharts.com which I posted in July 2019 is about the best one I have seen on the total return calculation of bond investments and their sensitivity to interest rates. Here is an important chart and a section: 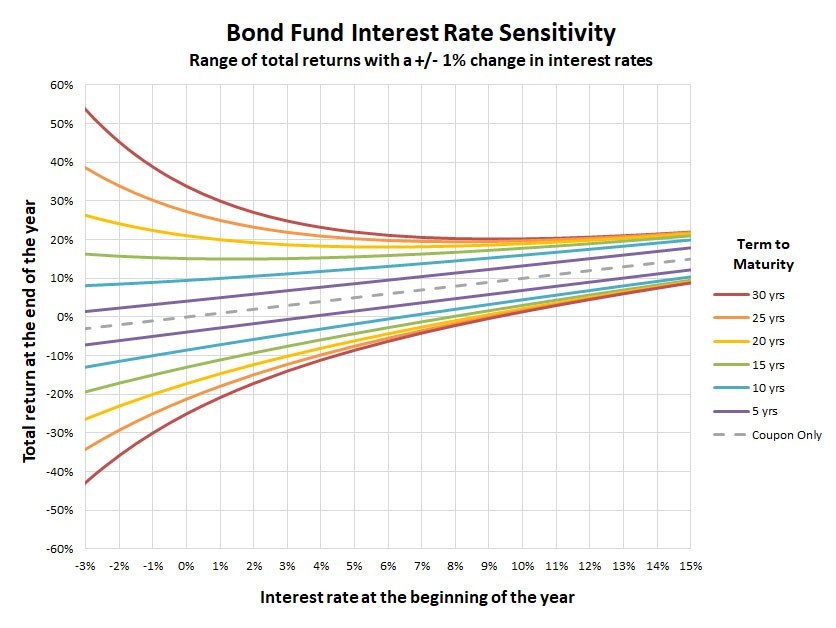 The rationale for bold claims on the downside potential in bonds is directly linked to the above way of thinking about how the impact of convexity multiplies at long maturities. The big point is that the majority of investors buy bonds for their stability and predictability. The potential that a move from 1% to 2% could shave 10% off the value of core bedrock holdings represents an existential threat to the basis on which most money management firms allocate capital.

That fact alone is likely to have repercussions far beyond the bond markets. It is also why governments will inevitably act to curtail bond yields from rising. Higher rates represent problems in terms of asset values, refinancing costs, discount rates and valuations. When the total outstanding debt is this high, it is literally impossible for governments to allow yields to rise. The next significant shake out in the stock market of about 10% is likely to usher in yield curve control. Right now, with the yield contracting there is little urgency in the decision.