Email of the day on Yes Bank
Comment of the Day

Email of the day on Yes Bank by Eoin Treacy

The cloud over Yes Bank is the result of the Reserve Bank of India (RBI) announcing last Fall that the bank’s co-founder and former CEO, Rana Kapoor, had not provided adequate reserves for bad loans in 2017. The RBI asked Kapoor to step down and find a replacement, which is a fairly radical move.

When Gill took over this spring, he immediately took large write offs to clear the decks, but has since changed his tone and become much more optimistic (I am referring to his interview on 5/17/19 on CNBC India). He is adamant that there are no more skeletons in the closet.

I am inclined to take him at his word, since the RBI has been closely scrutinizing Yes Bank for the past 6 months and knows the full extent of any problems. Also, the RBI found no issues in its most recent review of Yes Bank’s reserves, released just after Gill took the helm (but before his first earnings announcement in which he wrote off everything). The RBI also just appointed a representative to the board, so Gill is being held accountable in real time.

Local investors remain nervous that there is more bad news coming in the next quarters, but I hold the view that the bank has adequate collateral for its important exposures (ADAG and Essel group), will get through this phase, and that perceptions will change – I think the shares will return to their historic valuation range in the next two to three years, providing excellent returns from the current price.

The capital raise in the next 6 weeks could also be a catalyst in this process. That could be when the bank announces a capital raise, possibly with the participation of a Private Equity firm or other marquee investor. Tier 1 capital is now 8.3%, and the bank needs the capital to continue to grow.

Long term shareholder returns from private sector banks in India have been excellent (HDFC Bank, Axis Bank, or Kotak Bank compare very well to the S&P 500 over 5, 10, or 15+ yrs. In USD). Yes Bank is trading at a severely distressed level compared to its historic valuation range, and I believe there is a strong possibility of making a 2x return in 3 years, and more over a 5-7 year time horizon.

I am set up to invest in India (which is no small feat, 4-6 months of paperwork)

The market capitalization in USD is $4.7bn, book value is $3.88bn, price/book is 1.21x. This is the lowest p/b ratio since the financial crisis (See chart below). In Aug 2013 the p/b ratio got down to 1.5x and recovered to 4.37x book by Jan of 2015. The mean p/b during the bank’s history appears to be around 2.7x, which is normal for private sector banks in India due to their continuing high growth and high ROE.

Here is a chart of Yes Bank’s p/b range since 2009. It is important to note that when the shares reached 1.5x book in 2013 they were INR 49/share, compared to today’s price of 137/share, owing to the bank’s very fast rate of growth in book value.

Veteran subscribers will be familiar with the fact that India is our favourite market for the long-term. The challenge for many investors has always been in how best to express that view since it is difficult to transact in Indian shares and the number of Global Depository Receipts is limited. That leaves funds which may or may not perform. 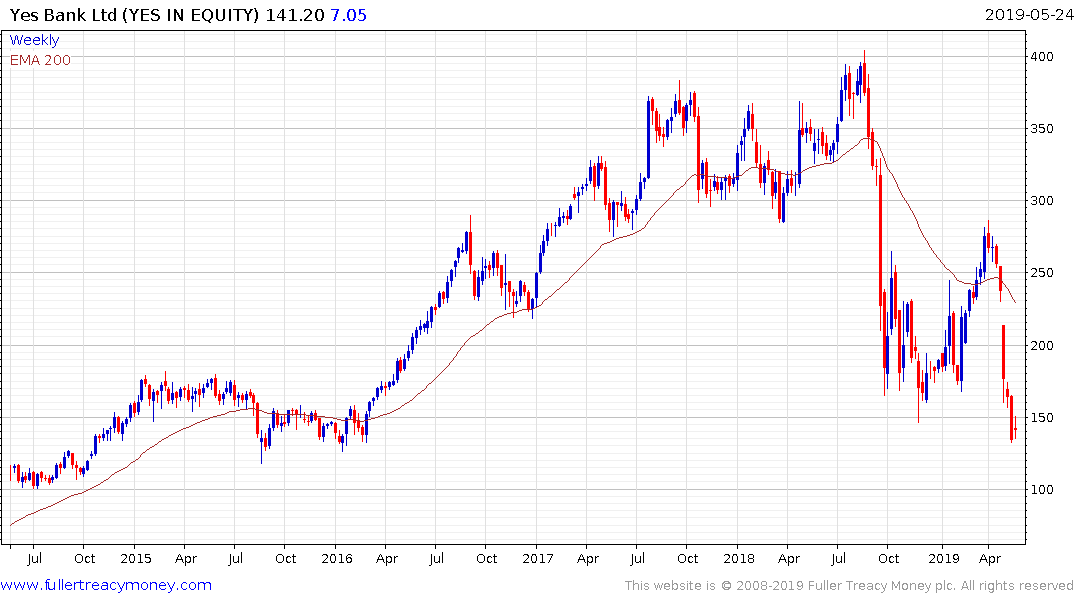 Allen Benello is fund manager, a long-time subscriber and dear friend who has gone through the 4-6-month process of being set up as a Foreign Portfolio Investor (FPI) by the Securities and Exchange Board of India (SEBI). He has offered to answer any questions subscribers might have about opening a brokerage account in India and can be reached at ABenello@WRPartners.com.

Yes Bank has accelerated lower over the last few weeks and broke to new lows last week. You don’t get that kind of selling pressure without a real problem being evident. The impressive countertrend rally from the beginning of the year has been completely erased in advance of the impending capital raise.

Investor sentiment is fragile because some people will look at the success of the UK’s Metro Bank recapitalisation as a good example while others will look at the failure of tesla’s capital raise to stall its decline as a bad example. That highlights the polarity of the investment decision. It is either going to be an impressive success or a heavy loss to pre-empt the capital raise but such is the nature of crisis investing which is necessarily high risk.