Hello Eoin, Whatever age you happen to be, it is always salutary to lose a parent. A constant pillar in one's life has gone and no more questions can be asked. It brings into relief one's own fragility and mortality in a way that few, if any, other deaths will do. I hope your mother's passing was a comfortable one. My condolences to you and your family.

While it is probably improper to revert immediately to business, I am sure you will want to re-immerse yourself in the observation and interpretation of markets without delay. On this basis, I have a question:

Given that we believe we are heading for monetary contraction, a rise in interest rates and accelerating inflation how should we be positioning portfolios? Banks and resources should be well bid for the time being and Japan should benefit from inflation.

But how about India, China and the other economies of North and South East Asia? What sectors and markets are best avoided? At what point does one accumulate cash? Gold is much talked about as an inflation hedge but that will be a shooting star - it might soar in the near future but it will then weaken once more. It is to be regarded as a hedge or a trade, not as an investment - at least that's my view.

In my own portfolio, I've trimmed China and India, reduced or eliminated high flying 'big-tech' stocks (but not touched PCT), increased my Japan weighting and increased cash. I'm probably underweight gold. I plan to accumulate more cash but at this stage, I've no idea what holdings I shall reduce or sell over the coming months. Providing one is not losing money, investment is fun but over the next two or three years, I suspect there will be plenty of opportunities to lose money which we should try to avoid. It's a tough time for you and you have plenty on your plate but if you care to comment on these musings it would be much appreciated. All best.

Thank you for your condolences. The outpouring of warmth and compassion from subscribers has been enormously gratifying for my whole family and I. My mother’s passing leaves a hole in the wider family, since she was the matriarch in no uncertain terms, but it has also encouraged us all to work harder at communicating.

This is a detailed question and there is no one simple answer. I’ll attempt to more fully explore these issues over the course of the next few days and weeks but here are some of my current thoughts.

I agree that resources, banks and Japan should do well in this environment. 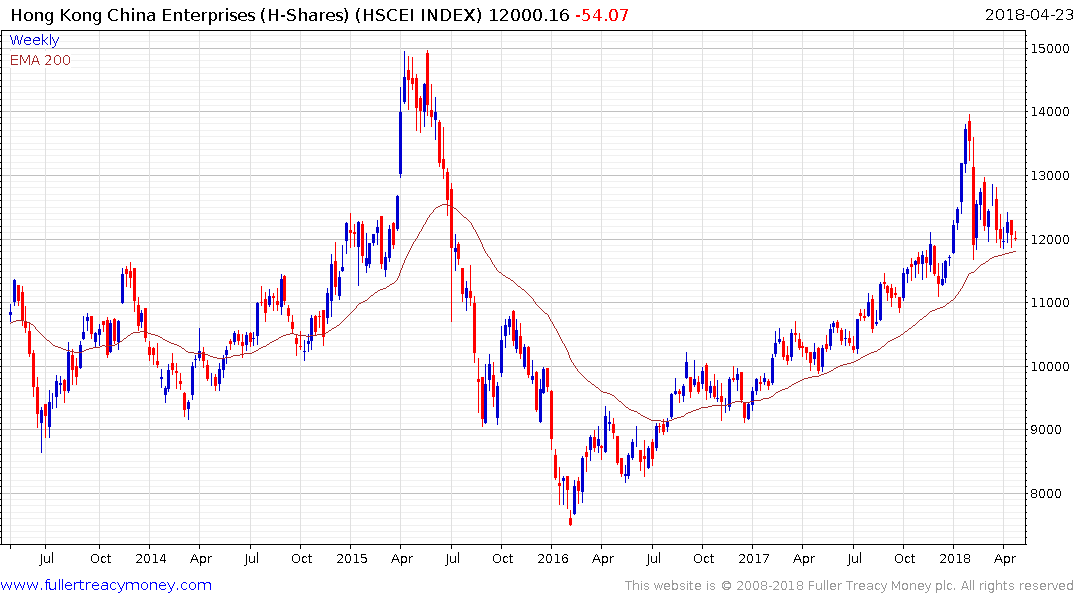 From the Big Picture review, you will know that I believe China deserves an additional risk premium because of the trend towards dictatorship, war on freedom of association and dilution of the profit motivation for the country’s successful tech companies. Therefore, one needs to pay particularly close attention to the Chinese stock market for any further signs of deterioration since it is right now on its reaction lows. 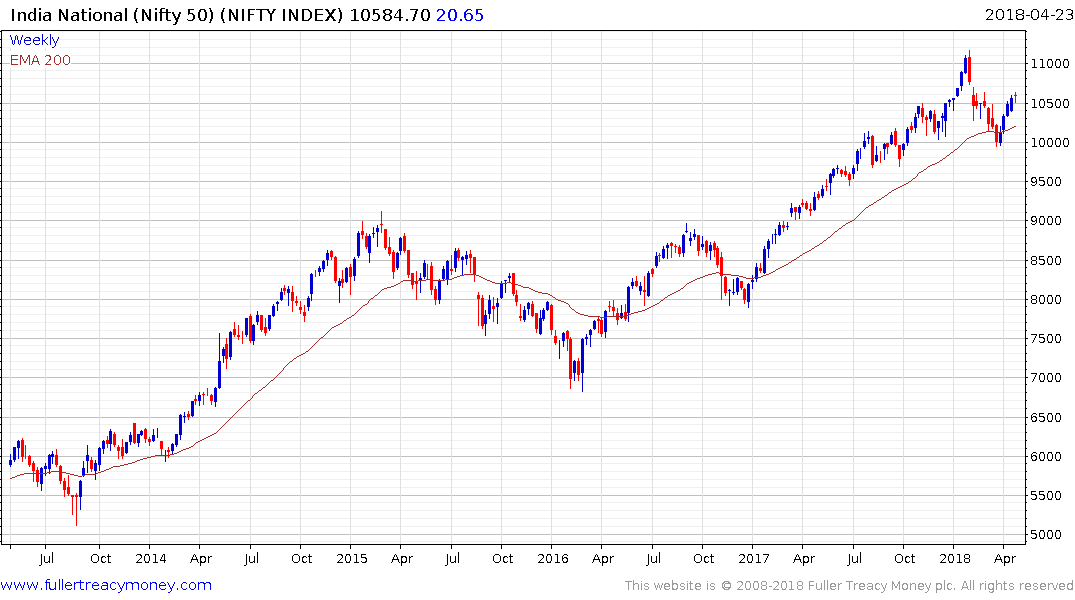 At the other end of the scale India is on cusp of the kind of digital revolution China embarked on five years ago. Wal-Mart is purportedly close to finalising the purchase of most of Flipcart which would give it is a significant position in India’s online retail sector. I believe any significant drawdown for India would offer a once in five-year opportunity to increase positions at very accommodative valuations. So far, however, the Nifty Index is holding the region of the trend mean. However, that performance is being cushioned by the weakness of the Rupee. 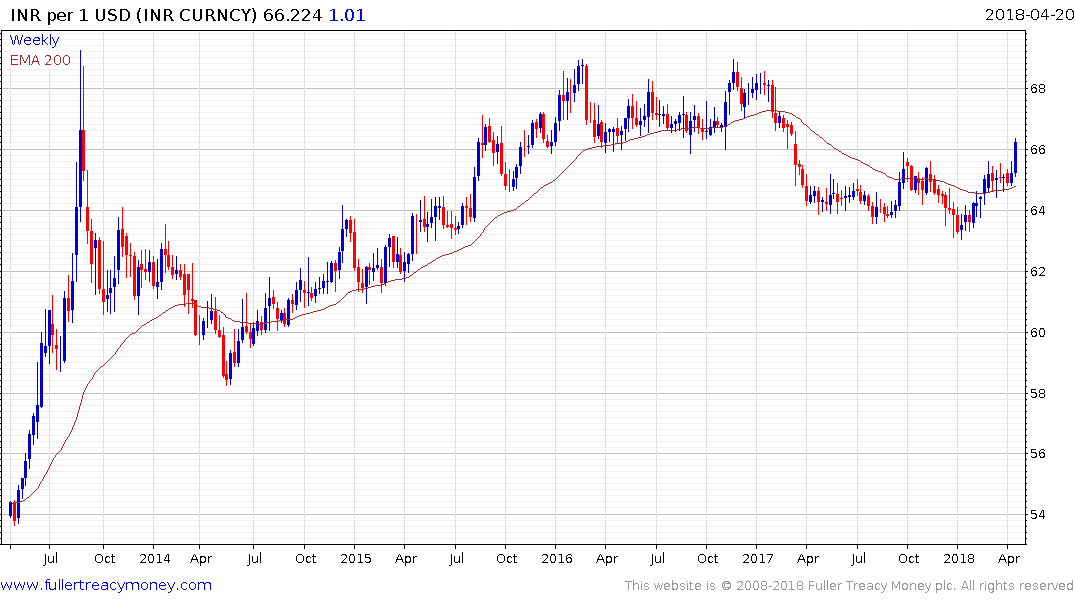 The wild card right now is the Dollar. Treasury yields are grazing the 3% handle and the Dollar is experiencing a broad-based rebound against just about all currencies. That is weighing on gold and the other precious metals. Emerging markets have been among the most popular destinations for fund flows this year because the Dollar has been weak. However, with that trend now looking tired there is scope for a pullback and consolidation. 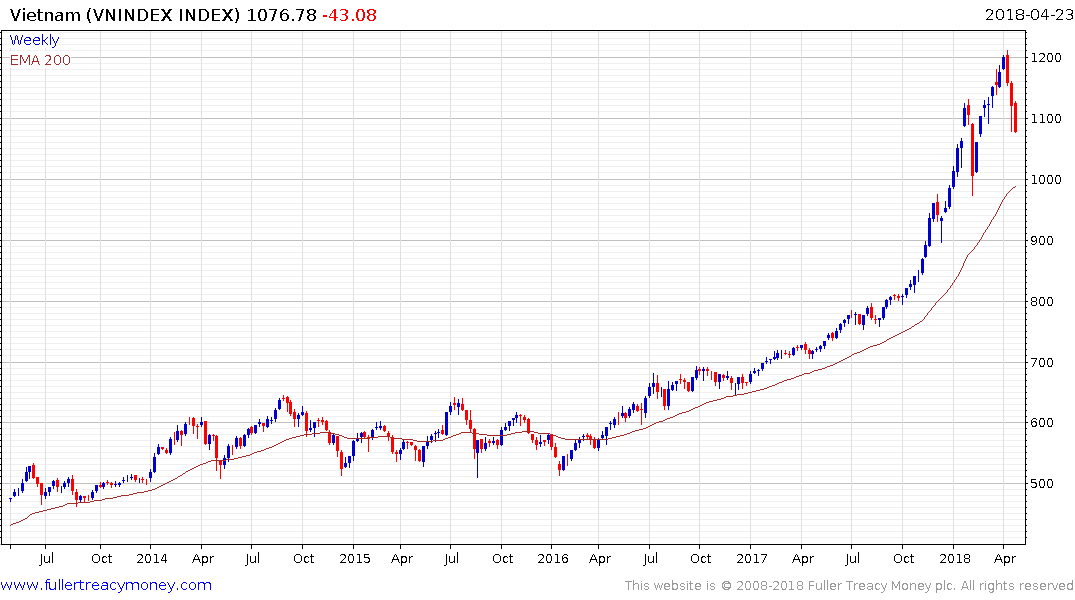 Perhaps the greatest indicator of such an outcome evolving can be seen in the tempered demand for Vietnam over the last few weeks. 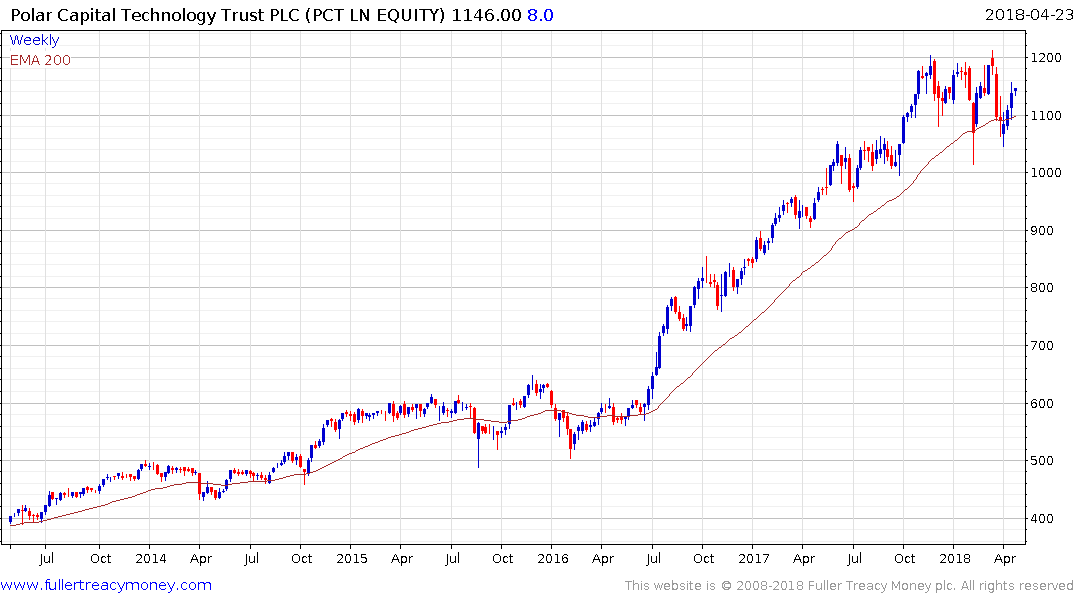 When to raise cash is just about the most important question we can ask. I see two answers to the question. The first is when we see clear evidence of trend inconsistency. For example, the Polar Capital Technology Trust (PCT) has bounced from the psychological 1000p level. As long as it continues to hold that level then we can conclude the trend is still consistent but a move below it would be a sell signal.

The other would be when the lead indicators for a future recession are flashing warning signals. That is not currently the case but it will be at some stage and that would be a time to think seriously about raising cash levels. 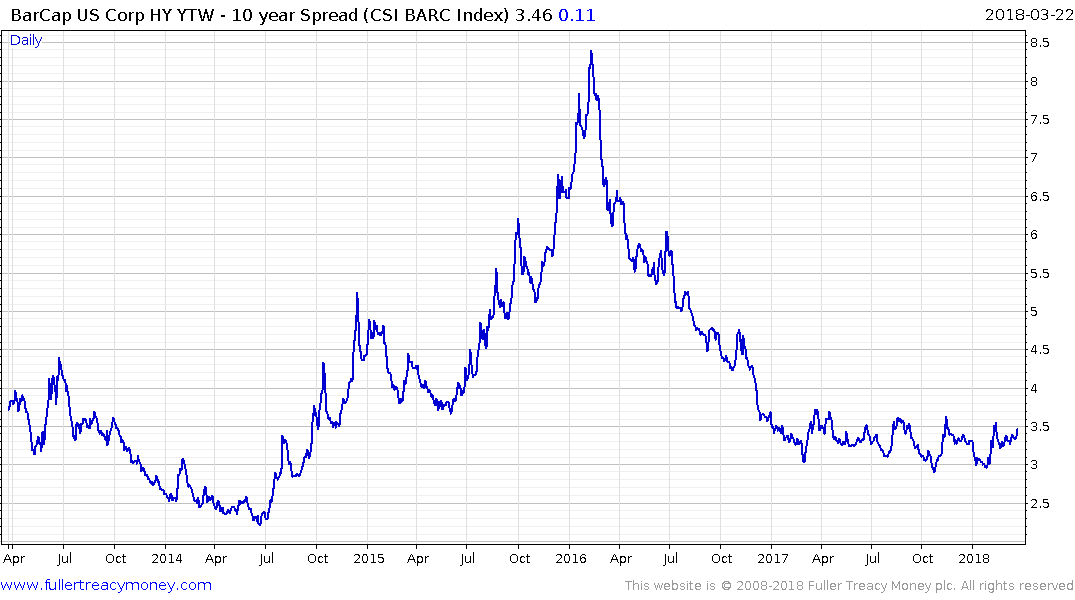 While high yield spreads have been static, what that condition tells us is the price of sovereign and junk bonds have been falling in tandem. Meanwhile, high yield ETFs are rolling over which is not a promising sign for stock markets. 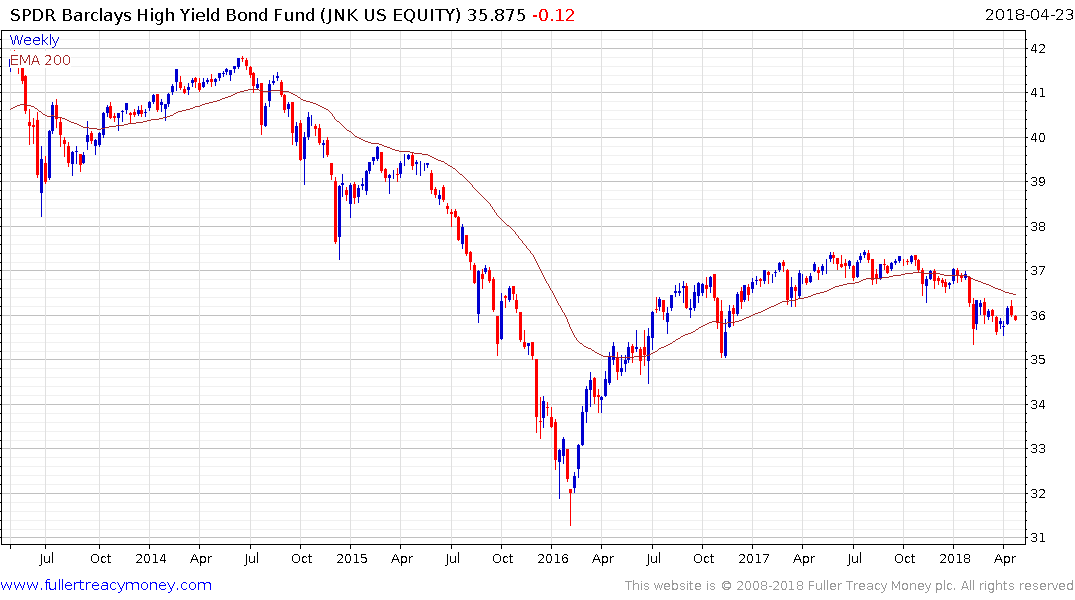 The stock market was predictably due a medium-term correction as it accelerated to the January peak. We are three months into that correction so more than a few people are raising stops, considering what to do next and thinking about what an ending might look like. You are not the only person asking these questions. Everyone is. There is still an argument over whether this is a medium-term range in the context of an ongoing bull market or a developing top. That discussion is likely to continue to progress until we see a clear break in either direction by the major indices. 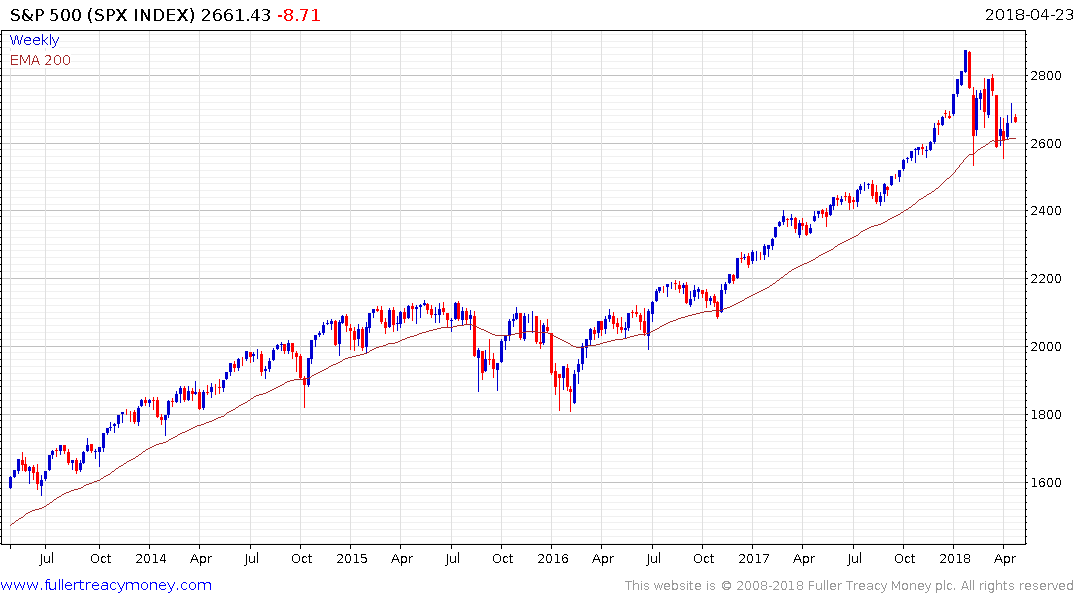 I am also now keeping an eye on defensives like tobacco companies because they are unloved, have strong cash flows and attractive yields. When they return to outperformance that will likely signal appetite for security is overwhelming growth. If that coincides with a change in broad stock market leadership it would be an additional sign of stress and a signal to raise cash from instruments with objectively high valuations. 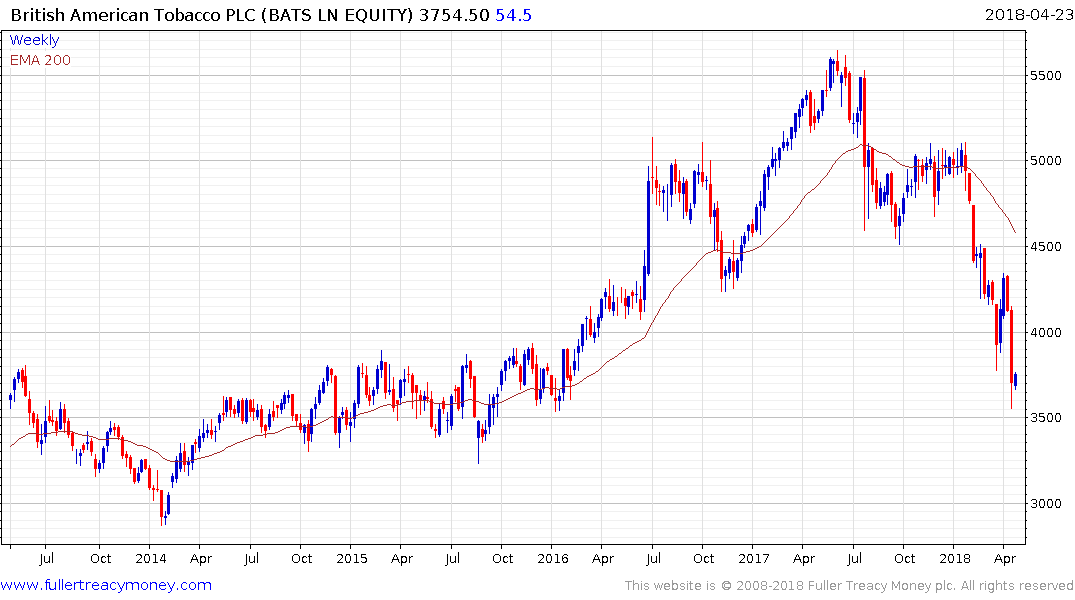