Email of the day on Venezuela on the Med:
Comment of the Day

Email of the day on Venezuela on the Med: by Eoin Treacy

There is an increasing number of commentators in Italy that have drawn to the conclusion that the current government (still supported by a vast majority of Italians, ~60% according to latest polls) is determined to leave the Euro area and the EU. I am now convinced about this too.

Since there is no legally viable way of achieving this, the path to be followed will be that of an "accident" on the financial markets: the delivery of the promises of universal income and lower taxation, will push the fiscal deficit to "breaking point", while the ECB (unelected enemy of the people #1) will start withdrawing the bond buying program.

With the spread uncontrollably high and seized credit (banks are also notorious enemies of the people), the only solution left (so the people will be told) will be the reintroduction of the Lira, overnight. The country will default and withdraw from international markets. Most activities nationalised.

The motivation for doing this for those currently in power is clear: seizing unrestrained power (forget ideology, or patriotic instincts... those are facades). A country with universal income (assuming that functions) ceases to be a democracy anyway. The sponsor for all this comes from the East.

The conclusion: don't touch Italian domestic names, not even with a barge pole from far away.

Thank you for your interpretation of a potential outcome to the introduction of a populist coalition in Italy which I think we can both agree is a doomsday prediction for Italy, the ECB and the nations responsible for funding the central bank. Let’s take the argument back to first principles.

With firebrand politicians it is always best to look at what they do rather than what they say. The election promise, as you highlight, was to introduce lower taxes and universal income. So far, they have signed up to meet the ECB’s borrowing cap and the introduction of budget busting policies has not been fulfilled. At least not yet. They will be sending a draft of the ECB today for approval and have signalled the deficit will be around 1.6% which is not exactly inflammatory. 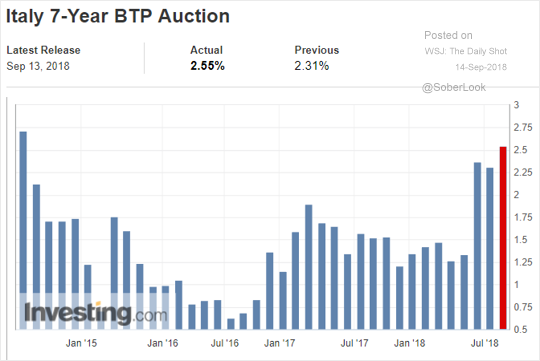 BTP funding costs continue to trend higher and the spread over Bunds is pulling back from the upper side of its range suggesting investors believe Italy is not about to crash out of the Eurozone. 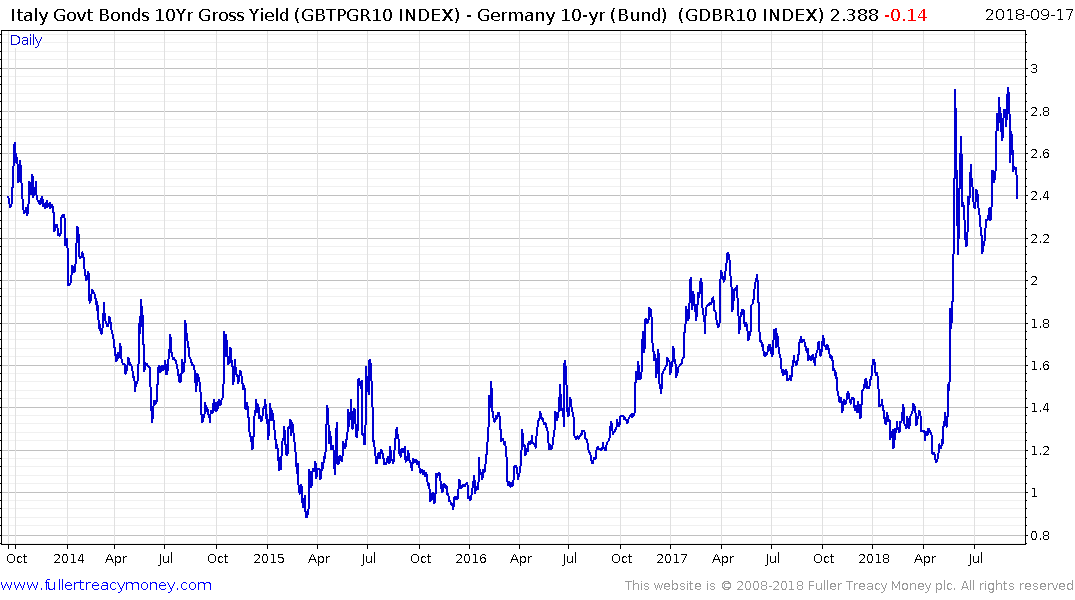 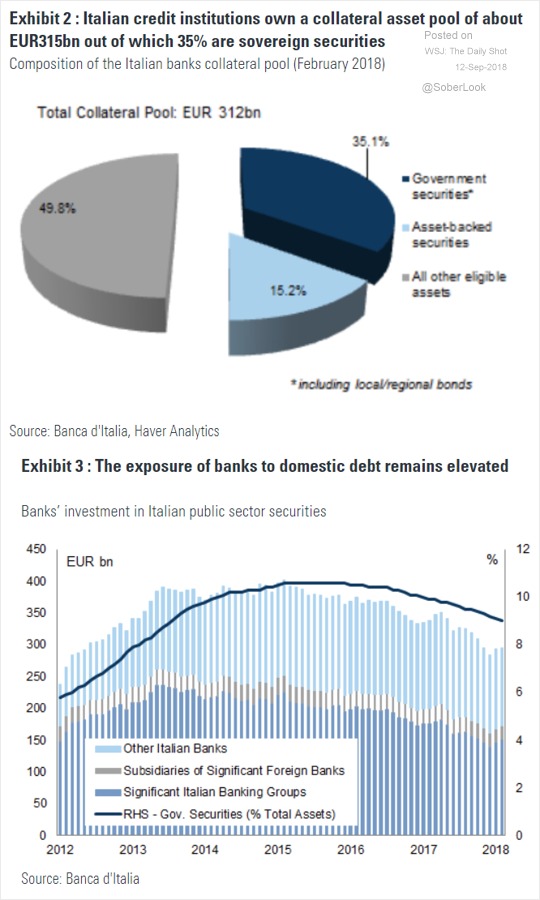 Italian Banks own very large quantities of Italian sovereign bonds but Unicredit and Intesa Sanpaolo have both been rallying for the last couple of weeks and are now testing the lower sides of overhead trading ranges. The chances of reversionary rallies back towards the still declining MA can be given the benefit of the doubt in the absence of a clear downward dynamic. The big question will be whether they can muster the wherewithal to sustain moves above their trend means to break medium-term downtrends. 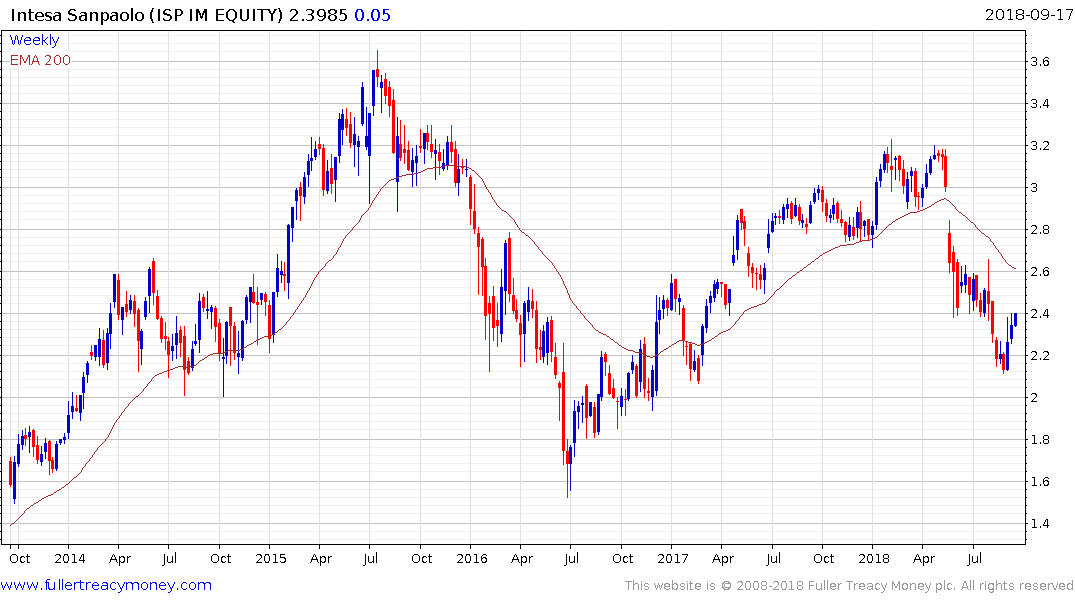 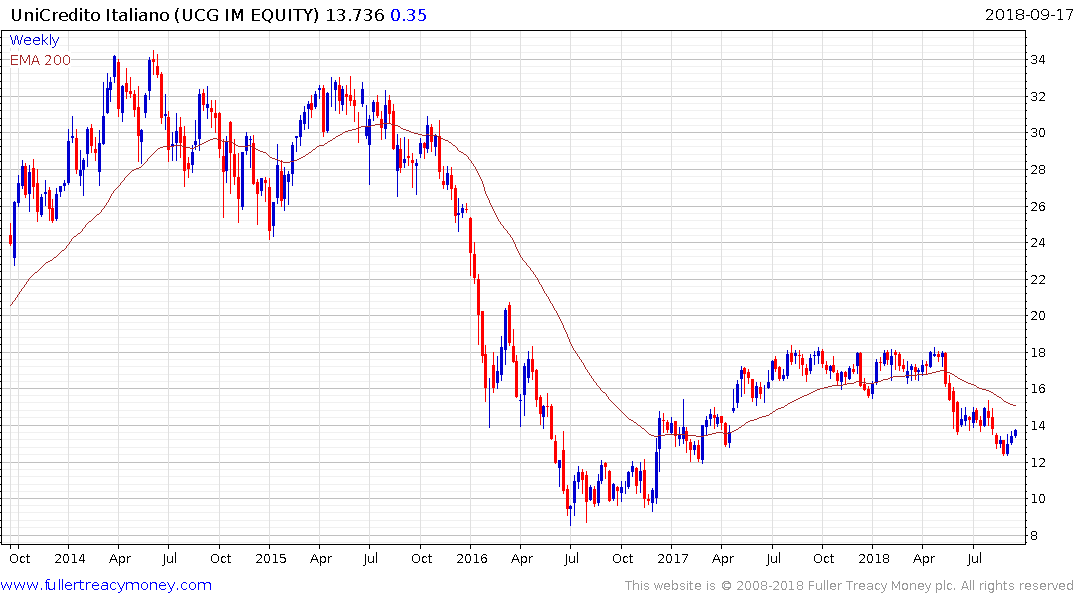 From these charts we can conclude that the doomsday scenario is not imminent. However, let’s think about if we had to pick a time to facilitate an exit, when would that be? Personally, a new ECB governor, with less experience than Draghi would be a good option so they might be more easily pressured. Then I’d look at the maturity dates of BTPs. It would certainly be advantageous to get a big chunk of debt refinanced at accommodative rates before exiting. Then of course there is the political calendar. Italian governments don’t have a very good record of surviving for a full term so there is always room for one of the two coalition parties to leave in a huff because the other side is not committed to the revolution.

What this schedule reflects is the ECB’s expectations for what Italian borrowing requirements will be for the next decade, assuming it sticks to the budget strictures which have been mandated. By some miracle if that is achieved the debt to GDP ratio will drop back below 100%.

Mario Draghi’s term ends a year from now and the above calendar suggests there is a significant ongoing funding requirement for Italian debt for the next several years. The ECB has already stopped buying bonds for its QE program so any erring from the prescribed path of budget normalcy is likely to receive a swift and clear rebuke from the bond markets.

The fact Italian yields are trading at considerably wider levels that are suggested by the nation’s credit rating signals there is an anomaly in the market which not been fully explored by traders. As long as the 10-year yield holds the move above 2.5% the market can be considered to be at a higher risk of an “accident” but not right now. 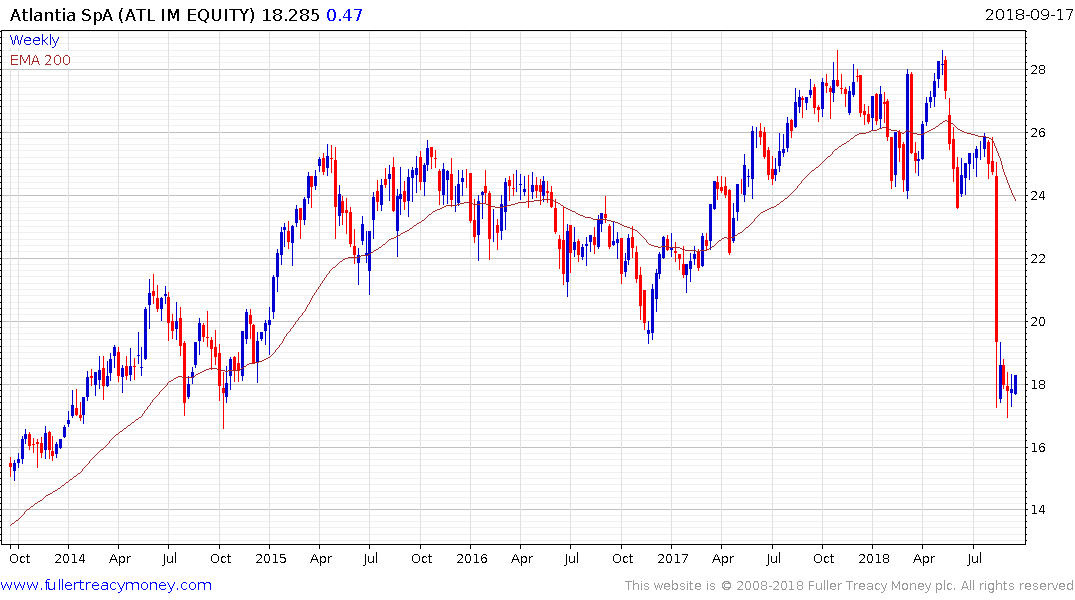 The question of how Atlantia’s ownership of the toll road network is to be handled will also be a test of the current administration’s appetite for nationalisation of key pieces of infrastructure. The share continues to hold in the region of the recent lows but some additional time is likely required to confirm whether support building is in fact underway.