Email of the day on valuing cryptocurrencies
Comment of the Day

Email of the day on valuing cryptocurrencies by Eoin Treacy

With Bitcoin and Ethereum continuing to impress price wise, how do you think about Valuation of these instruments? Though you’re a Technician you clearly have a great understanding of valuation at the same time. With regards to these instruments though I have never read a compelling valuation argument. I couldn’t tell you whether Bitcoin should be worth $500/$5,000 or even $50,000. What framework do you use to determine real value, or can you refer me to something of substance that you might have read?

Thank you for this question. At present cryptocurrencies do not pay dividends so they do not submit readily to traditional dividend discount models. That may change with Ethereum’s transition to a proof of stake model which anticipates making interest payments. At that stage a traditional value model will be possible but whether it is relevant to the price structure is unknowable at present.

Cryptocurrencies fall into the same category as gold or technology/growth shares when it comes to valuation. For gold the easiest way to value it is as a ranking relative to other monetary instruments like currencies. Alternatively, one could think of it as a zero-coupon bond with no maturity. In that case it does best with negative real interest rates.

The utility argument stems from attacking the range of transactions that take place in the present economy or to capture market share in the emerging economy of greater online utility and autonomy. In much the same way as it was impossible to predict Apple would reach a $2 trillion market cap in 2008, speculation about what bitcoin is ultimately worth are unlikely to be accurate.

The one thing we know is that more than half of bitcoin are held off the market and the difficulty of mining more is going to become progressively more difficult. Long-term holders don’t have an incentive to sell but institutional investors have a clear incentive to diversify out of fiat currencies. That’s a supply inelasticity meets rising demand argument and it will persist until supply is coaxed into the market.

In a world of zero interest rates and with the total of negative yielding debt hitting new highs, growth is prized above all over attributes. That explains the continued allure of private equity investing and it also helps to explain interest in bitcoin, Ethereum and the other alt coins.

Ultimately, all valuation comes down to the discount rate against which any potential return can be judged. At present there is no discount rate so valuations become heavily distorted for all asset classes. By comparison cryptocurrencies come out as winners. 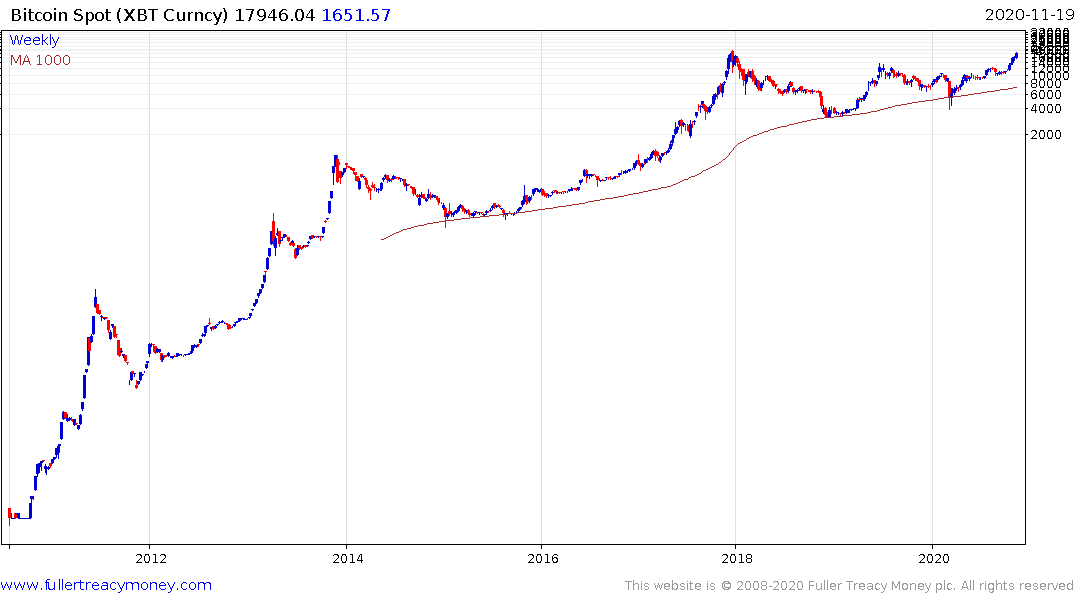 The consistency of the more than decade long trend of bitcoin is that it is capable of ranging for up to three years, big reactions have tended to find support in the region of the 1000-day MA and break outs have tended to be measured in multiples rather than percentages.