Email of the day on trading gold
Comment of the Day

Email of the day on trading gold by Eoin Treacy

you (re-) purchased gold at 1879(as well as silver at 23.70 and platinum at the same time) as a trade as opposed to a medium to long-term investment.

(these PMs today finished slightly below your purchase prices).

At the same time, you have been saying that reaching or overshooting the 200dma on the downside which presently is at about 1780 (another 5% correction for gold from where it is today) could well be possible.

Do you intent to "stay put" in Gold and the other PM’s if such a further decline takes place or rather sell rather quickly and try to enter again at what will hopefully be the new low?

Thank you for your comments which will certainly be of interest for the collective as the mid- to long term long potential of PMs is certainly a high conviction long investment theme of yours.

Thank you for this question and I agree it may be of interest to the Collective. The essence of the question is about the nature of uncertainty and the shape of reversions towards the mean.

The most important thing to remember about gold is it is characteristically volatile. That means when it trends it can move a lot in a short period of time. That’can occur on the upside or the downside which is why we have often said gold tends to overshoot. Moving averages, as areas of potential support, are not set in stone. That's why we have always spoken of the region of the MA. No knows where gold will eventually find support and begin a sustainable rally. We can only deploy a strategy that will benefit from that eventuality and wait until it occurs.

The primary attractive quality of trading gold is it tends to have explosive breakouts. If one is willing to buy it when it is depressed, then you will usually be rewarded with an explosive breakout later. With that said gold is capable of ranging for years in between breakouts. In fact, one of the primary consistency characteristics in the last bull market was it ranged for 18 months and broke out in Septembers of uneven years. The best time to buy commodities is on weakness.

When they do eventually breakout and everyone becomes suddenly enthused with trading, the next reversionary process is closer. When I sold the positions, I bought near the March lows a couple of days after the peak in August, I got a lot of feedback that it was wrong thing to do. 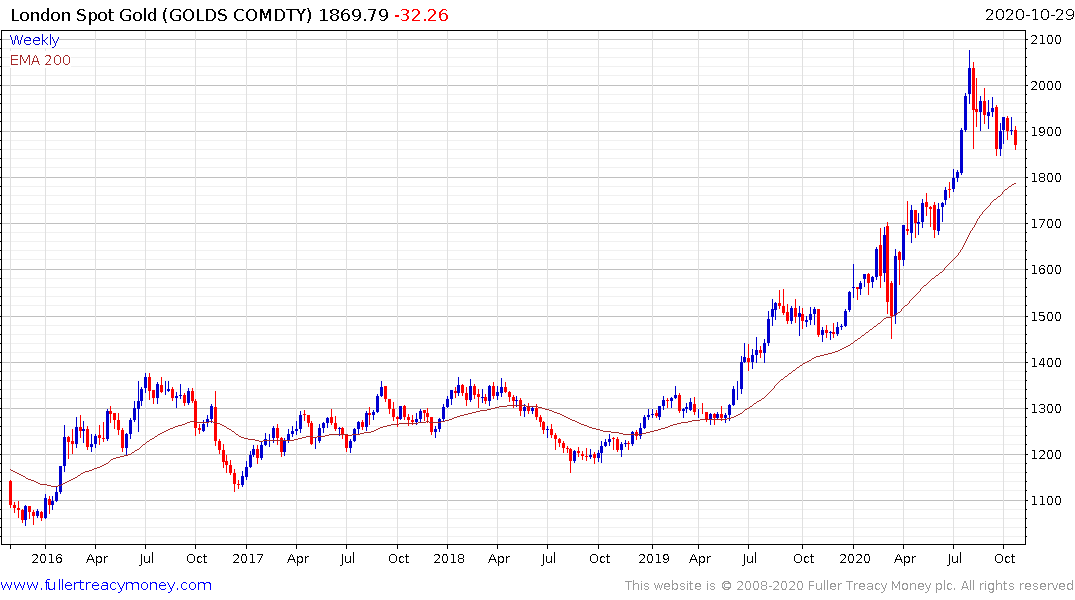 When a price series accelerates, the peak is usually marked by a stab on the downside. After that it will either go straight back down, range for a while which allows the trend mean to catch up or some mix of the two. There have been plenty of occasions when gold pulled back, ranged, had another short severe stab on the downside, found support and began to trend higher again.

My tactic for dealing with this uncertain environment has been to have an initial position and a number of bids in the market below prevailing prices. If those bids are triggered, I will get the larger position I want at an attractive price., If they are not triggered, I will need to pay up later.

I am only willing to place orders in the market because I see the clear potential for substantially higher prices for gold in future. If I did not have that medium-term view, it would be a fruitless exercise.