You have put a chart of the TGA balance and projections in the comment of the day. I am sure I am not alone in wondering where this information comes from. Is it speculation by the Daily Shot or has the Treasury announced that this is their intention? How certain can we be that the projection is reasonably accurate? Have such projections been made before and, if so, have they held true? I am confused as I have never heard of such projections before. Best regards and keep up the good work.

Thank you for this question which may be of interest to the Collective. The Treasury General Account (TGA) at the Federal Reserve was irrelevant until before the global financial crisis. Since then, it has been growing as the role of government spending in the economy increases.

The Trump tax cuts in 2016 represented an additional upwelling of government spending and the pandemic saw another tripling of the peak figure. For the government to spend the money it first needs to accumulate that cash in its account. That’s what the TGA is. The projection in the chart comes from a Deutsche Bank report and since the US government’s spending plans are reasonably predictable, I believe it is an accurate depiction of what to expect. 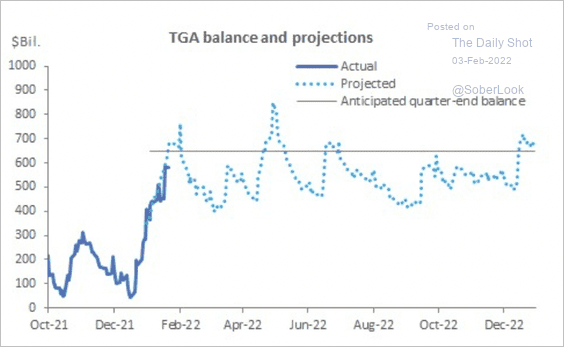 The US government spending trillions on social programs, represents a significant source of new liquidity for the market. That’s what the chart depicts. The money allocated for the infrastructure bill has not been spent yet and the above chart suggests the $750 billion accruing in the TGA will be used for that purpose. The reason the figure is so volatile is because of the constant need to increase the debt cap.

It’s quite likely that the Fed is preparing to raise rates in March in direct response to the additional spending that will inevitably flow from this cash accumulation by the US government. That’s like the set of policies deployed during the Trump tax cuts and bond yields rose then too. The challenge at present is the total debt figure is much higher today so the economy is a lot more interest rate sensitive.

Thanks to a subscriber for this titbit of information from Horizon Kinetics "Total U.S. federal debt just passed $30 trillion and amounts to over 130% of U.S. GDP.  The effective federal interest rate is 1.7%.  Raising this effective rate by just 1% would add over $300 billion in interest expense to the budget, or another 1.3% of GDP." 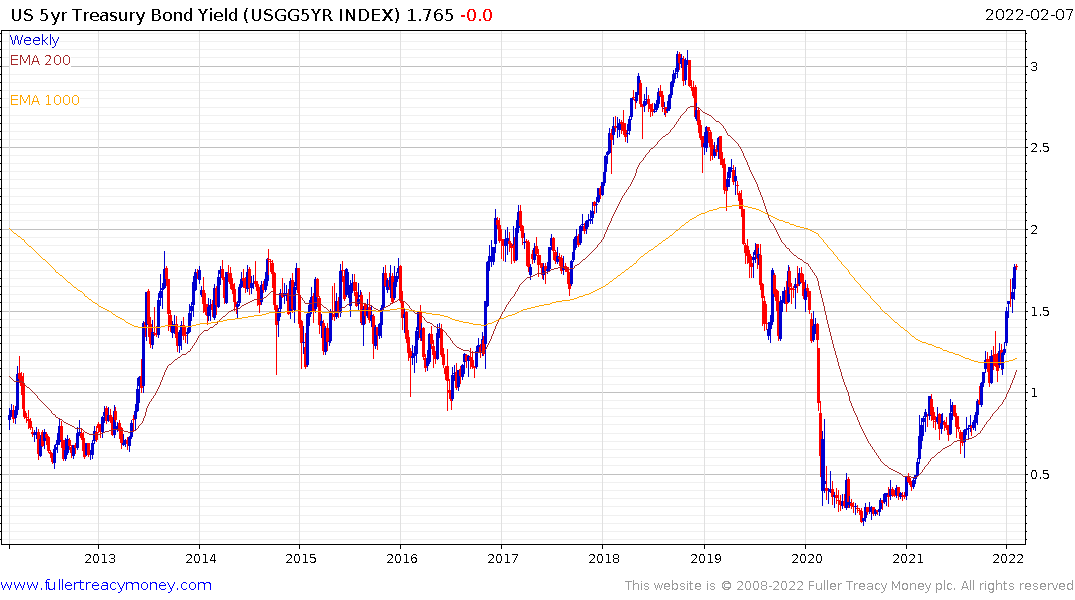 The 5-year yield is now at 1.8% and climbing so the cost of servicing the debt has risen by $30 billion in the last week. That puts a significant brake on the ability of the government to increase spending. The surge in yields and the staid environment on the market’s inflation expectations are pricing in slowing growth. That’s also why the stock market remains nervous about rates and growth.