Email of the day on the Rand and governance:
Comment of the Day

Email of the day on the Rand and governance: by Eoin Treacy

Hello Eoin, First of all I would just like to say I have no problem with the way you have organised your video commentaries. I find them very perceptive and thought provoking. I would hazard a guess that 95% of your subscribers are of the same opinion.

On your comments on South Africa, having spent the past 16 years here, I would advise investors not to hold their breath as regards the new president Cyril Ramaphosa instituting much in the way of improved governance here. Corruption in this country is all pervasive and is now penetrating certain personnel in the judiciary. I know this from various contacts I have with regards to the Rhino poaching problem. The Zuma faction still wields huge influence within the ANC. The black economic empowerment policy has led to totally unsuitable and unqualified people being placed in key positions both in government and in the private sector. Given the current state of the world economy, I would indeed be surprised if the ZAR is not the currency to lose most in value among the emerging markets over the next year.

Thank you for this informative email and your on the ground perspective from South Africa.

The simple conclusion reached by investors is Ramaphosa is better than Zuma which is good news. The monumental challenge of tackling corruption is a long-term challenge and if the trend toward deterioration can be allayed that can be considered progress. It is too early to conclude whether the new administration can make progress on that front but I think everyone is aware of just how difficult that could be.

Meanwhile, demand for safe haven assets has declined with increasing potential for the US government shut-down spat to end. The cancelling of flights due to arrive in LaGuardia today was a reality check for politicians. The Dollar, Yen and Treasuries all pulled back toward. 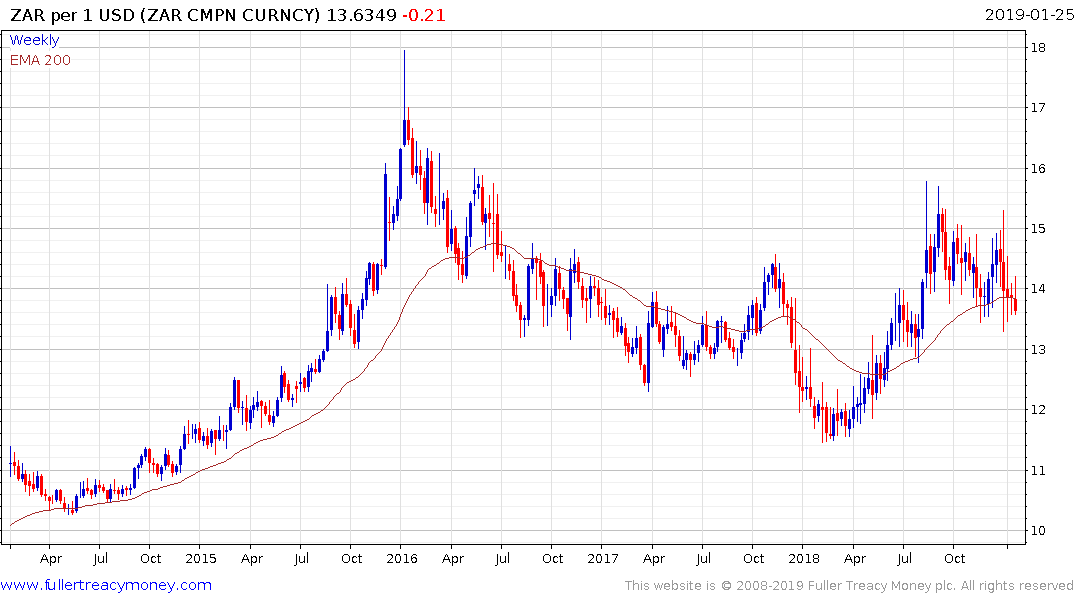 That lent a tailwind to emerging market currencies and the Rand has strengthened back to test the early December peak. It is now trading above its trend mean and has potential to strengthen further if a broader risk-on trade takes hold.