re the EURO If the Euro currency breaks up, for example, if weak Italy or strong Germany leave, the transition to something else will have to be managed , to avoid chaos; either there is a new Euro, or regional Euros, or the countries go back to their old currencies. Something entirely digital could be invented overnight, perhaps through temporary dollarisation of prices now in Euro. If currency has to be printed, this would take weeks. The French destroyed their Franc printing presses back in 2000/ How would you see the transition ? How would this affect the Swiss Franc ? 2) REQUEST for INCLUSION of the following stock in Chart Library: Tanzanian Gold Corporation ( TNX), listed in Toronto. present price 0, 93 CAD Thank you

Thank you for this question which may be of interest to other subscribers. I believe thinking there is a difference between the Deutsche Mark and the Euro is one of the most common misconceptions of investors. The “creation” of the Euro was more about extending the umbrella of the Deutsche Mark to the whole continent, with its low borrowing costs, than forming a new currency out of nowhere.

Viewed in those terms, the benefit Germany gets from Western Europe using its currency cannot be overstated. It gets the same benefit the USA does from having its currency as the reserve for global commodity trading. That is something it would be loathe to concede. The bigger question therefore is how long the façade of national sovereignty can persist against a clear federalist agenda where Germany is the paymaster general of the Eurozone.

So far, the populists have been defanged in their efforts to overcome the fiscal strait jacket. Italy’s debt sustainability is contingent on it continuing to hold its deficits within the prescribed 2%, however the clear problem with that is it leaves no room for assistance in a recession. I think it is more likely the fiscal limits will be loosened, which would push the harmonisation of debt to GDP ratios out even further, rather than any real prospect of Italy leaving the Eurozone.

Nevertheless, there are risks to this status quo conclusion, not least because the quantities of debt on offer are so large. Negative yields of national debt, particularly Germany, suggest ample scope for issuing rescue bonds at attractive terms. That could be the catalyst for full federalisation. 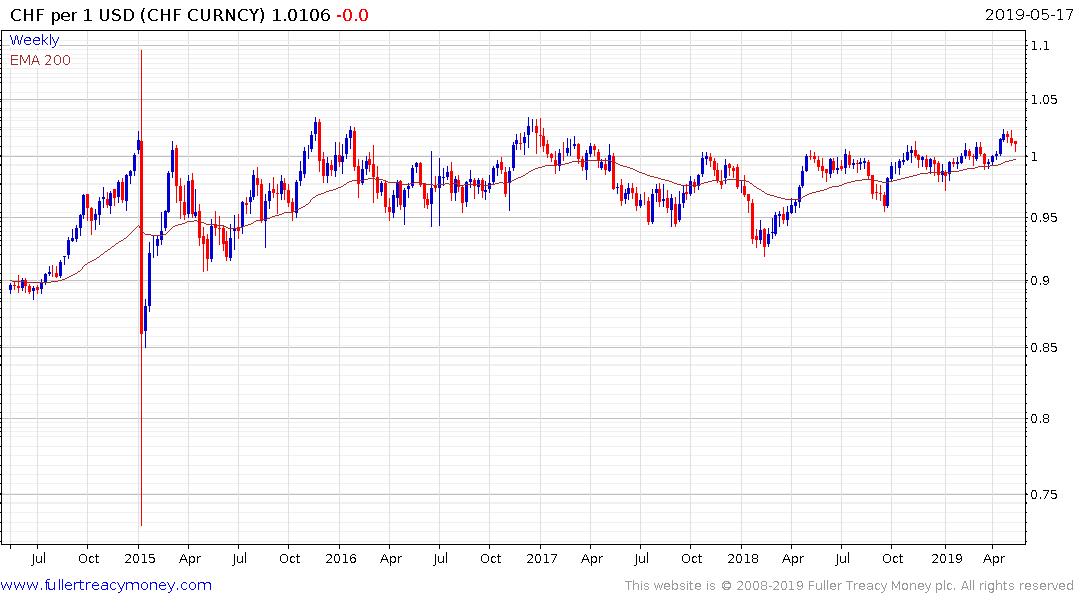 The negative alternatives are so disastrous, including defaults on sovereign debt, and massive bailouts of pension funds that they appear unlikely to occur. However, in such circumstances significant upward pressure could be expected on the Swiss Franc before the SNB intervenes to arrest its advance.