Email of the day on the potential for a crash:
Comment of the Day

Email of the day on the potential for a crash: by Eoin Treacy

I am a little concerned, that Bill Ackman is shorting the market and Ray Dalio and Michael Burry have predicted a market collapse. Burry recently went on record to confirm this prediction.

You have not mentioned Margin Debt for a while and my further concerns are that despite Margin Debt officially being at an all-time high - the ArchEgos scandal has demonstrated that perhaps not all of the margin debt is recorded as some hedge funds are circumventing the need to record their position by using prime banks to hold assets for them.

PS Best wishes to you and your family.

Thank you for your kind words and for this email which helps to elucidate the very real concerns of a large swathe of the market. Just over a year ago the market crashed. The decline was unlike anything we’ve seen before because it was unrelenting in its severity. Even during the crash of September/October 2008 there were weeks when the market rallied. 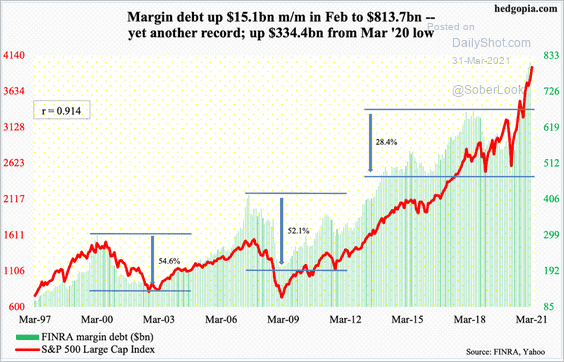 That did not happen in 2020. Between late February and March 24th, the S&P500 failed to rally for two consecutive days. Fear permeated market and it had a long-lasting impact on sentiment. Even today people are afraid of a repeat of this unrelenting selling. However, it would be extremely unusual to see another 35% drawdown a year after the last one.

That’s does not mean the market will rise in a straight line and there is no doubt that speculative interest in quick gains is rising. NYSE no longer updates its margin debt figures but I keep an eye out for mentions of the data. I found this graphic last week.

Margin debt declining from an all-time peak was a lead indicator ahead of the financial crisis so it gained a cult-like following. The history of the last twenty-five years illustrates how dependent the 2008 - present bull market has been on liquidity and speculative interest. The time to be most alert is when margin debt is ramping higher faster than the stock market is advancing and then turns lower. That’s not currently the case despite the elevated level overall.

I do, however, have a lot of sympathy with the view that there are sources of leverage sitting outside the ability of analysts to easily monitor. Archegos’ contracts-for-difference (CFTs) is one example but the cryptocurrency space is another and the private assets space is yet another.

Obviously, interest rates play a role in how much risk traders are capable of taking on. The cost of leverage has risen in line with the uptrend in yields. That’s why the Nasdaq-100 underperformed in the first quarter. We also have ample evidence of the inverse correlation between bond yields and risk assets. Every time bond yields weaken; the stock market surges. Monday’s trading was another example of that. It suggests we may be on the cusp of another rotation out of cyclicals and into quality. 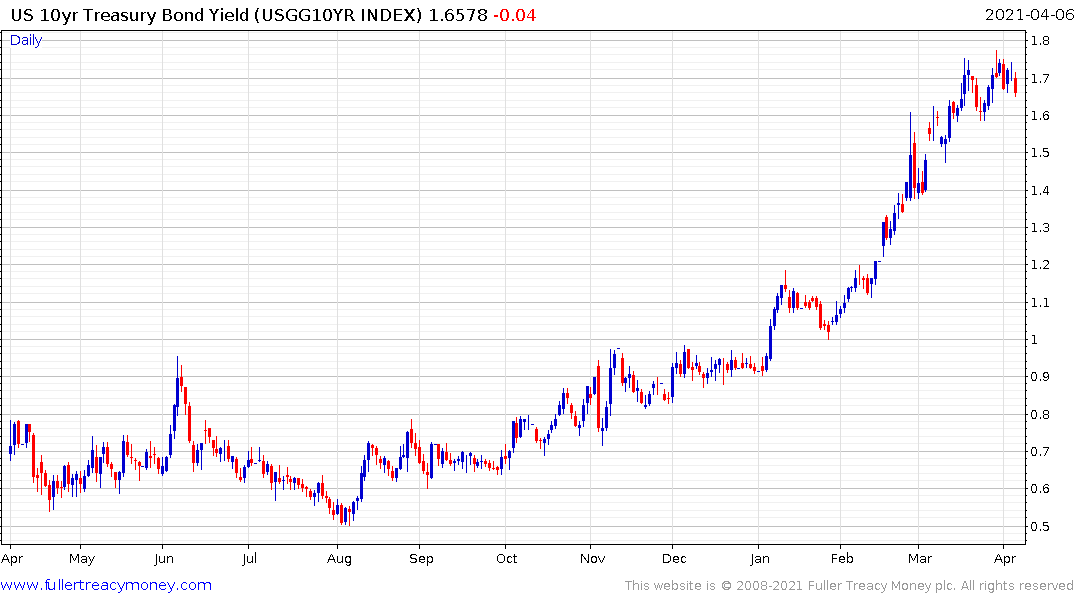 I am positioned for yields to correct through my longs in Treasuries and precious metals. Ultimately, the delivery of successive rounds of fiscal and monetary stimulus have helped to inflate all manner of financial assets. Therefore, the outlook for liquidity is the basis for a continued uptrend.

At present the pace of the stock market advance is picking up. A clear downward dynamic will be required to check momentum. Acceleration is a trend ending signal but of undetermined duration. We are due some consolidation but a sustained move below the trend mean will be required to question the consistency of the yearlong uptrend. 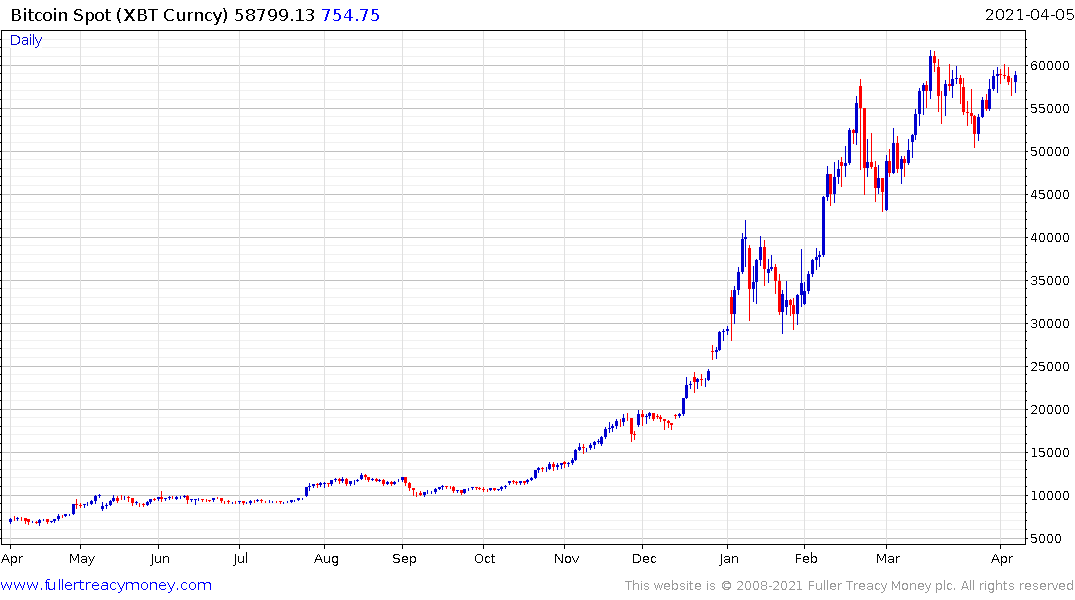 Bitcoin is potentially one of the best lead indicators we have for other risk assets because it is a lightning rod for speculative interest. The price continues to pause in the $60000 area. If it fails here, it would be a sign that appetite for risk taking is moderating. That would be a significant warning signal that reversionary risk is escalating in the stock market.