“That piece I sent you from Koo is really good. It really reinforces my views on rates. Low for as long as we both shall live.”

Thank you for this educative report “Central Banks in Balance Sheet Recessions: A Search for Correct Response” by Richard Koo dated March 31st 2013. While more than a year old, it represents a cogent argument for the persistence of low rates which has gained credence. Here is a section:

When the effectiveness of monetary policy depends on the size of fiscal stimulus, it should be the responsibility of the central bank to inform the public and policy makers that the government should not move toward fiscal consolidation when the private sector is repairing balance sheets. Such persuasion is essential because the average public is still unaware of the disease called balance sheet recession. They are unaware because the schools have never taught them about the possibility of such recessions.

It is extremely encouraging in this regard that Chairman Bernanke of the Federal Reserve, who once championed the supremacy of monetary policy, is now spearheading the effort to keep the US from falling off the fiscal cliff. His answers to a question in April 25, 2012 press conference where he said “the size of the fiscal cliff is such that there is absolutely no chance that the Federal Reserve could or would have any ability whatsoever to offset that effect on the economy” attest to the fact that he knows the importance of fiscal stimulus when the private sector is not borrowing money. In particular, his comments indicate that monetary policy cannot substitute for fiscal policy during this type of recessions.

Unfortunately, he is so far the only central banker who is openly warning about the risk of fiscal cliff. President Draghi of ECB and Governor King of Bank of England are still insisting on fiscal consolidation even though their economies are suffering from serious balance sheet recessions.

The US government deficit has been decreasing over the last year which means the US Treasury has been issuing fewer bonds. This has been at least part of the reason the Fed has been able to engage in tapering and why the size of the Fed’s balance sheet has not decreased during the same period.

The health or otherwise of consumer balance sheets is central to the zero interest rate argument. While US home price increases stalled over the last three months, there is no denying that prices have recovered somewhat on aggregate and surpassed their peak levels in some of the more desirable locations.

While the bulk of commentary has focused on the fact corporations have been squirrelling profits away in offshore locations, the USA’s advantages in energy costs and technology have also seen corporations invest in plant, technology and expansion. Labour force participation has been decreasing and many of the jobs that have been created are in the service industry. However conditions are generally improving despite these caveats. Pimco referring to an Old Normal instead of a New Normal is an additional sign that sentiment towards the economy is improving.

Two-year bond yields exhibit first step above the base characteristics. This suggests bond market investors are positioning for the gradual unwinding of the zero interest rate environment. As you will be aware, our view is that the secular bull market in Treasuries was extended by QE but has ended. While the short-term outlook remains skewed towards ranging, the medium-term risk is for yields to increase. 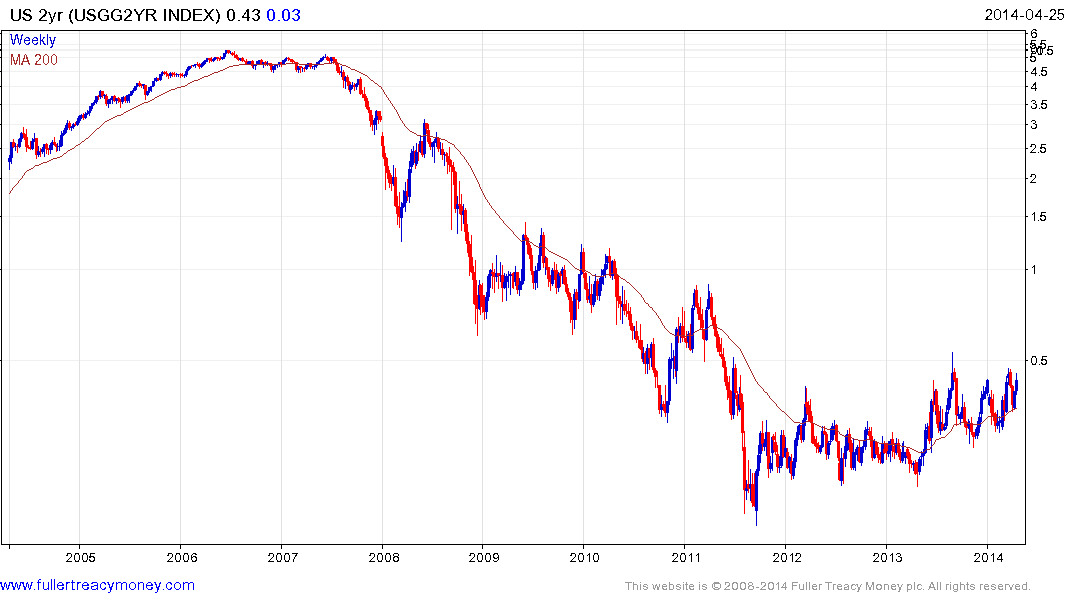 This section by Steven Abrahams from by report from Deutsche Bank highlights the risks to MBS from the normalisation of short-term rates not lease since the Fed also has a substantial position in these securities:

The market already shows signs of investors starting to hedge exposures to  the short end of the yield curve, anecdotally including MBS investors. Repo rates on the short end of the Treasury curve have started to drop, a sign of increased interest in borrowing issues and selling them short. That’s a good sign. Although the vast majority of yield curve variation historically comes from  parallel moves, Fed tightening historically has flattened the curve. The Fed gave fair warning last week. Hedging MBS with 10-year notes may not work well for long.