Email of the day on the impact of currency on global investment decisions:
Comment of the Day

Email of the day on the impact of currency on global investment decisions: by Eoin Treacy

Again, very grateful thanks for the very interesting and thoughtful comments you post each day. They are helpful to both newer investors and the more experienced who may get locked into their way of thinking. I count myself in that category! One factor that does not get mentioned perhaps as often as it should is the impact of currency movements on investment portfolios. Those of us using pound sterling as our home currency may feel particularly sensitive to this at this time. Those of us that assess gold as a possible investment often check gold in different currencies to determine whether a broad-based uptrend is evolving (eg compare gold in USD, Euro where the pattern looks quite different.) But I suspect fewer investors factor in currency movements when buying stocks in the USA, Europe, India, Japan and China. What are your thoughts on this?

Thank you for this question which I believe will be of interest to other subscribers. From everything I have witnessed over the years large institutional investors look for three attributes when deciding to invest in markets beyond assets denominated in their domestic currency. These are potential for currency market appreciation, potential for capital market appreciation and yield differentials. I see no reason why investors of all hues shouldn’t follow the same rationale. That is the basis for thinking as a globally oriented investor and why this is a Global Strategy Service.

The Australian Dollar and British Pound account for the majority of our subscribers’ base currencies. The Australian Dollar in particular is under pressure while the Pound is very short-term oversold amid negative sentiment surrounding the European elections. Meanwhile there is no prospect of interest rates rising in either country. Interest rate differentials and potential for currency market appreciation is clear in some emerging market countries and both countries have large numbers of companies that consolidate overseas earnings in domestic currency. 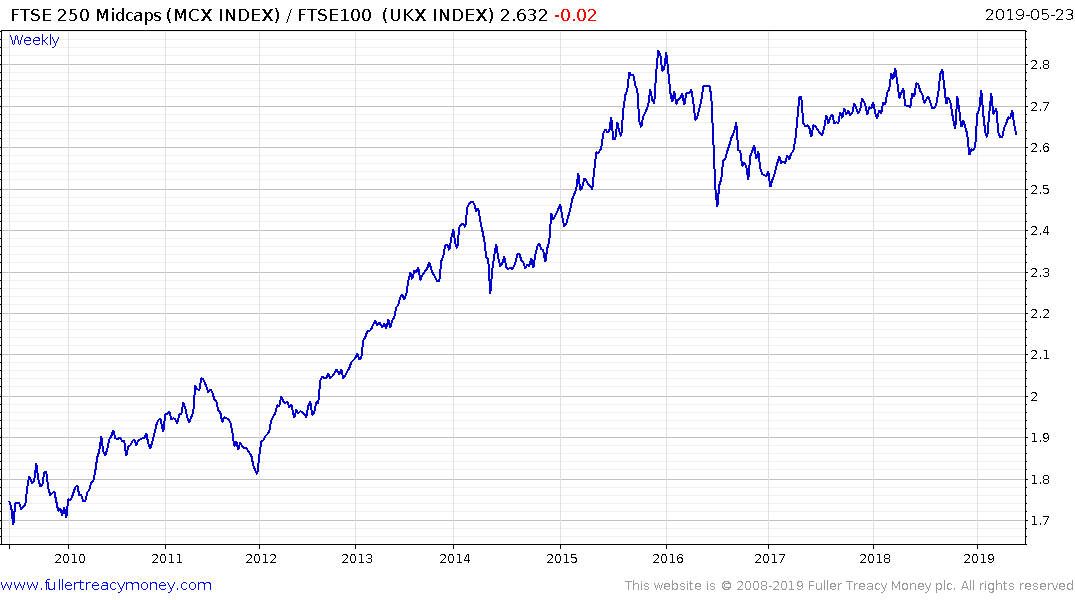 In the UK, the domestically focused FTSE-250 outperformed the more internationally focused FTSE-100 by a wide margin between 2009 and the Brexit referendum. The subsequent decline in the Pound has contributed to larger cap companies with more foreign earnings gaining the upper hand.

When you have the currency, the market and the yield in your favour it is the kind of scenario that creates secular bull markets. Brazil’s advance during the commodity boom was a perfect example of that and India is about as close to that scenario as we have in the market today. That suggests the current pullback is likely to represent a buying opportunity.